Thailand's economy could contract by as much as 10.4% this year as trade and tourism are severely dampened by Covid-19, with the ongoing drought and floods adding to the woes, says the World Bank. 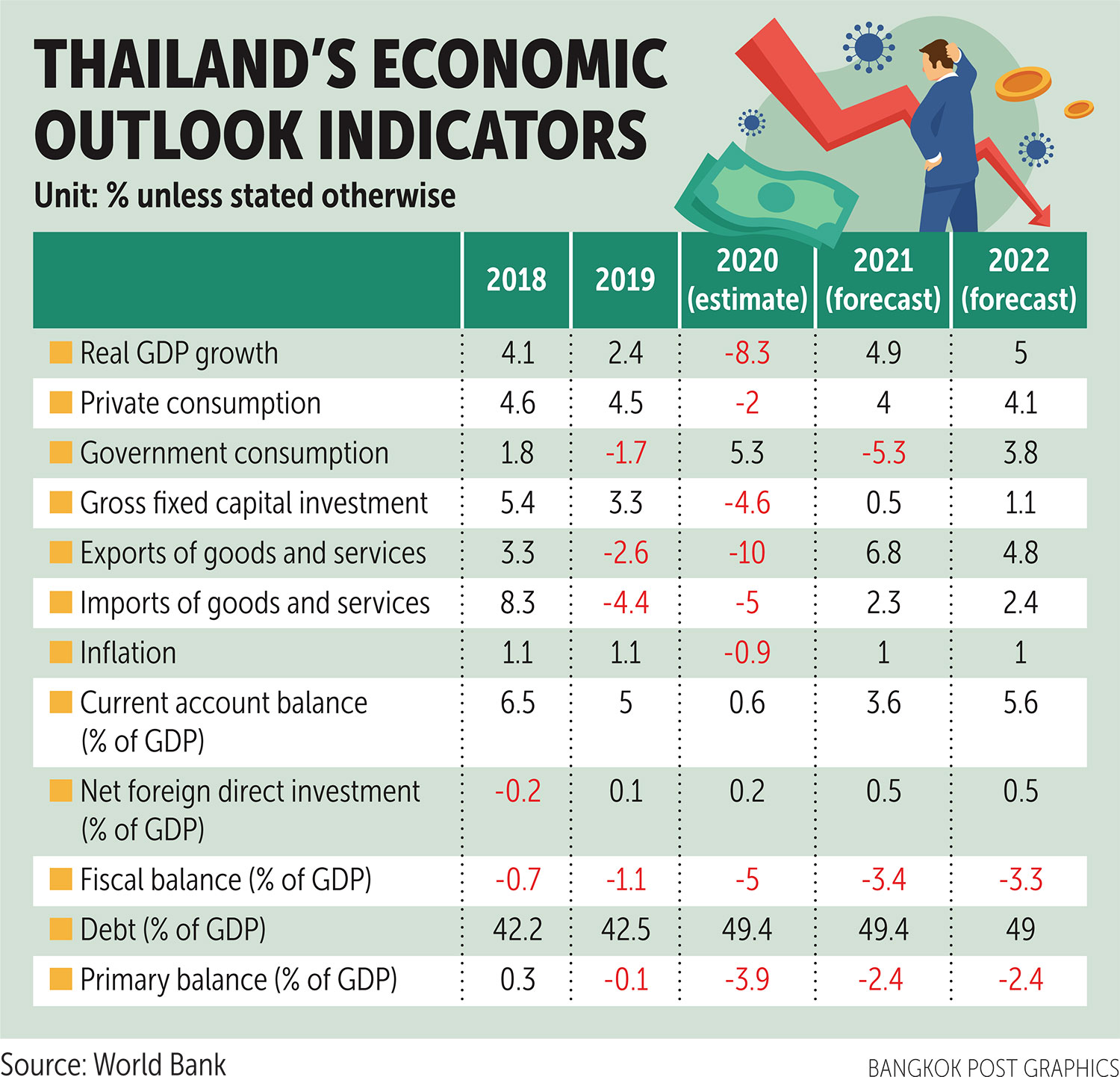 The dismal figure is a projection of the worst-case scenario, and it will take at least three years for the country's GDP to recover to pre-Covid levels, said Kiatipong Ariyapruchya, senior country economist at the World Bank.

If this holds true, it will be the worst economic contraction for Southeast Asia's second-largest economy based on available data, much worse than the dip of 7.6% in 1998 after the 1997 Asian financial crisis.

Policy continuity is a factor affecting investor confidence, as there have been several changes in the government's economic team, while resurging political protests add to the downside risk, Mr Kiatipong said.

Political tensions are also lingering with the resignation of key members of the economic team and ongoing anti-government protests that may lead to greater political uncertainty and diminished investor sentiment, according to the World Bank.

Thailand's full-year economic contraction is forecast at 8.3% this year in the base-case scenario, down from a 5% decline projected previously, the global lender said.

The base-case projection is in line with the Fiscal Policy Office's 8.5% contraction but is more pessimistic than the 7.6% contraction anticipated by the Bank of Thailand.

The 8.3% contraction is well below the country's potential growth of 2.5-3% and is among the sharpest projected declines in East Asia, according to the World Bank.

"While mobility restrictions and mandated business closures began to ease at the end of the second quarter, the economy will continue to face a sharp decline in net exports, particularly from tourism receipts and weakening global trade, and a slowdown in domestic demand reflecting weak consumer and investor sentiment," the World Bank said. "Severe drought and floods will hurt the agricultural sector, the main livelihood of most of the poor."

A resurgence of Covid-19 infections in Thailand and globally is a key downside risk, which can hurt demand for Thailand's exports and impact domestic economic activity, the World Bank said.

Poverty projections show that poverty rates will remain elevated over the near term, due to not just the protracted recovery, but also deep-rooted challenges pre-pandemic.

"Poverty reduction has made little progress since 2015 and poverty rates are projected to remain higher in 2020 and 2021 than in 2015," the bank said. "The profile of the poor may also change and include more households from services and tourism sectors falling into poverty."

Despite Thailand handling the virus outbreak well and implementing a stimulus package making up 8-13% of GDP, some stimulus measures, such as the 3,000-baht cash handout per person, were not directed to the targeted segment and the government should find a method to distribute money to reach households more efficiently, said Birgit Hansl, the World Bank's country manager for Thailand.

Thailand has relied on fiscal and monetary stimulus to boost the economy, but fiscal stimulus aimed at supporting employment-generating projects could be challenging given historically low levels of disbursement rates, Ms Hansl said.

The government is advised to partner with the private sector to come up with options to alleviate the public's plight and implement social protection measures for the labour and household sectors, she said.