The Tourism Council of Thailand issued a fourth-quarter forecast for foreign arrivals of 50,000, down 99.5% year-on-year. (Photo by Pornprom Satrabhaya)

Assurance of a gradual economic recovery has been repeated by Thailand's financial authorities using empirical evidence, but the reality on the ground reveals more pain in the near term.

Despite signs of business activity re-emerging after strict lockdown measures were eased, the Covid-19 pandemic is challenging the business cycle. Sluggish economic conditions and subdued earnings were already projected before the outbreak.

Total business closures totalled 13,400 year-to-date as of Aug 18, according to the Economic Intelligence Center (EIC), a research house under Siam Commercial Bank.

On average business closures grew 38% for the last 2½ months and the ratio is expected to inch up in the second half of the year, said Yunyong Thaicharoen, first executive vice-president at the EIC.

"Even though there are signs of improved recovery momentum, the central bank remains concerned about the unemployment rate," said Don Nakornthab, senior director of the Bank of Thailand's economic and policy department. "In August, unemployed workers remained high at 1.9 million, marginally declining from 2.1 million in July."

The number of people claiming unemployment benefits increased from 410,000 in July to 440,000 in August.

Another negative omen is swelling household debt, likely to continue ballooning this year.

The ratio of household debt to GDP rose to 84% in the second quarter, an 18-year high, with a value of 13.6 trillion baht, up from 13.5 trillion or 80.3% of GDP in the first quarter, according to central bank data.

The figures reflect how individuals and households have accumulated more debt, including mortgages, while others are low on liquidity and need the financial assistance of banks, according to Kasikorn Research Center (K-Research). A domestic travel fair held at CentralWorld over the weekend. The TAT anticipates total domestic trips of 80-100 million this year. Somchai Poomlard

Thailand's tourism industry, laid bare by a loss in confidence and strict virus containment measures, will have to depend largely on the domestic market this quarter, as there is hardly any hope for the usual influx of foreign tourist arrivals during the high season.

Thailand has reported 62 million domestic trips during the first eight months, making the TAT confident that the target is possible, propelled by supporting factors. These include additional long holiday weekends granted by the government and an extension of a tourism spending subsidy to Jan 31, 2021.

Although the government is expected to kick-start the special tourist visa (STV) scheme in October, the number of international tourists allowed to use it per month is relatively small compared with arrivals before the pandemic.

The country's reopening this year is a stepping stone for next year as the TAT expects significant growth after the entry process is back at full speed, Mr Yuthasak said.

The Tourism Council of Thailand issued a fourth-quarter forecast of foreign arrivals at 50,000, down 99.5% year-on-year, with total receipts plunging 99.1% to 4.5 billion baht.

This outlook is a minuscule improvement compared with a 100% decline in both arrivals and revenue in the second and third quarters.

The year-end figure for international arrivals is likely to close at 6.74 million, which was the tally pre-lockdown in March as Thai borders remain closed for eight months, with reopening schemes restricted to few groups in recent months. 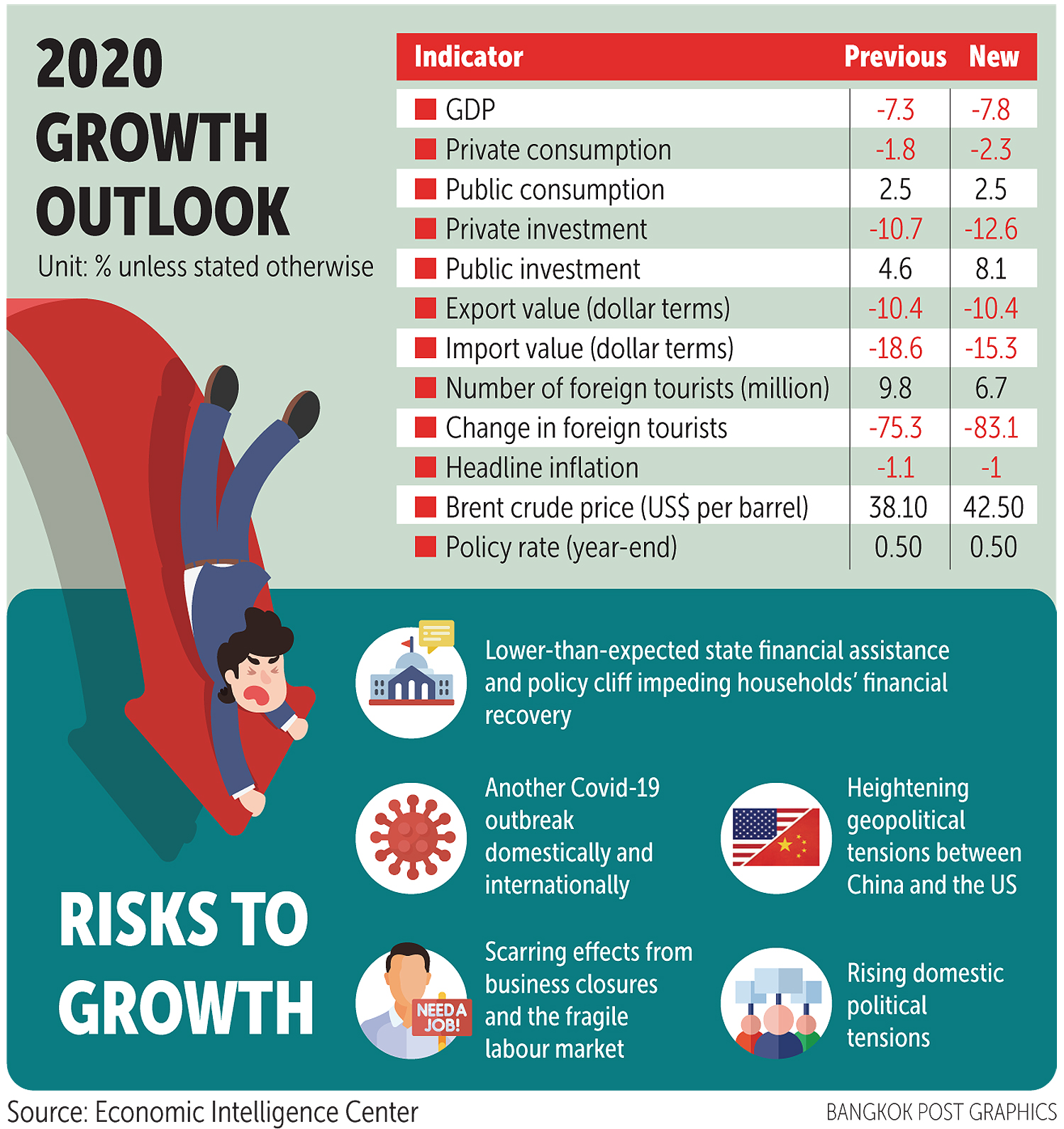 K-Research forecasts the non-performing loan (NPL) ratio of commercial banks to slightly increase to 3.5% this quarter from an estimated 3.3% in the third quarter.

Despite the Bank of Thailand's debt relief measures expiring later this month, the central bank has encouraged debt restructuring measures on a case-by-case basis.

The regulator has undertaken initiatives to implement an additional debt restructuring scheme, called DR Biz, under a consolidated creditor pool concept. This is expected to help ease and prevent bad-debt classification.

Borrowers in the debt restructuring programme can still service their liabilities either by paying the principal amount or interest. Therefore, these loans are not classified as NPLs or Stage 3 loans under the Thai Financial Reporting Standards 9, but rather as special mention or Stage 2 loans, defined as loans overdue more than 30 days but not more than 90 days.

This practice should curb the climb in NPL ratio, the central bank said.

In fact, banks have seen a deterioration in asset quality because of the economic downturn ushered in by the pandemic, said Kangana Chockpisansin, head of research at K-Research.

Banks have continued to set aside additional reserves from the third quarter last year, well before the pandemic emerged.

Under the previous lockdown policy to contain the outbreak in March, loan-loss provisions in the banking sector peaked at around 70 billion baht in the second quarter this year, compared with a range of 35-45 billion baht per quarter for previous quarters.

"With the debt restructuring measures, the NPL ratio will not increase significantly. But banks will continue to keep a strong cushion amid the weakening asset quality outlook," Ms Kangana said. "The loan-loss provisions of the banking sector are expected to be in a range of 60-70 billion baht this quarter, considered the highest amount since the Asian financial crisis in 1997 based on quarterly reserve." 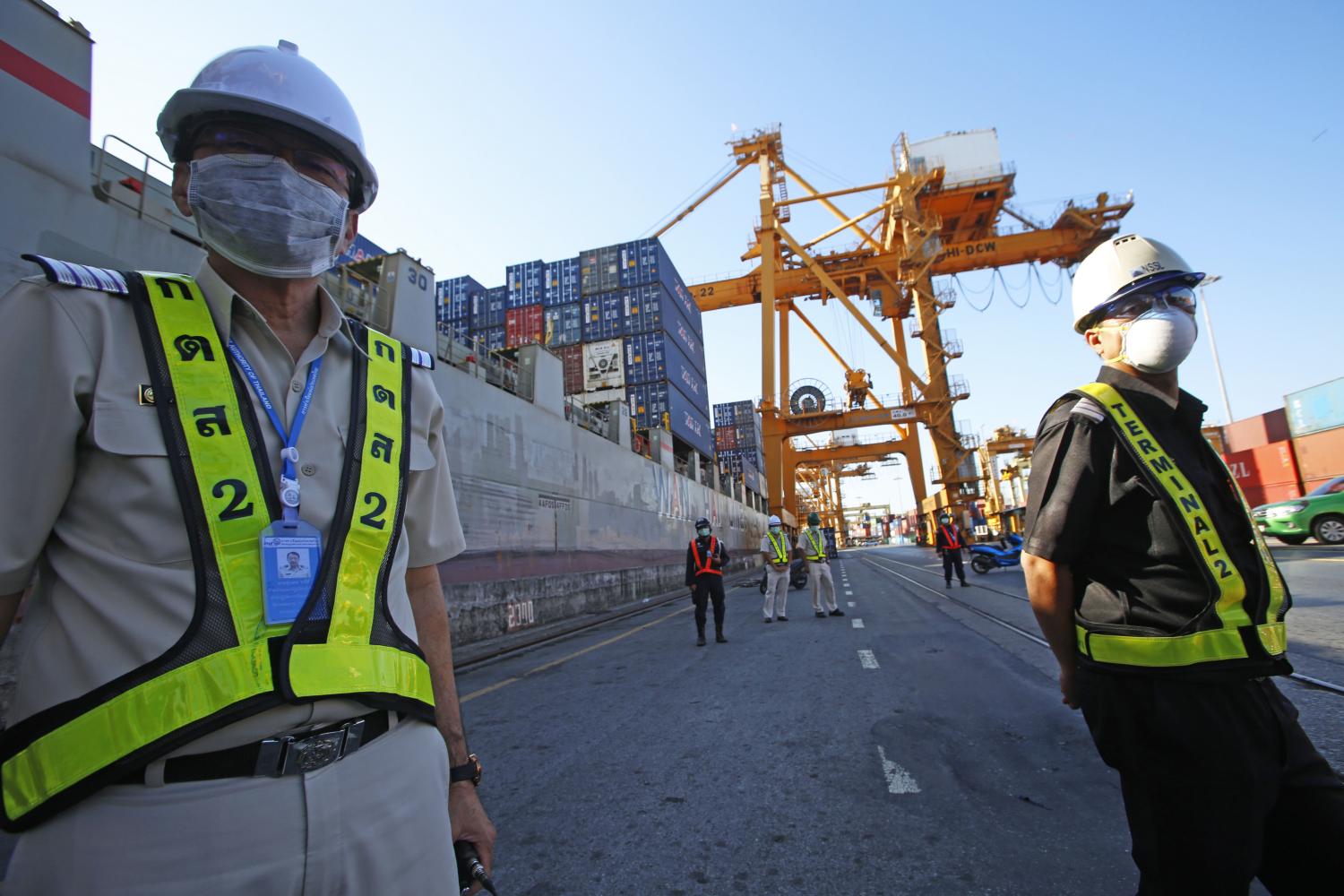 The atmosphere at Bangkok port as officials wear face masks. The pandemic still weighs on export prospects for the remainder of this year. Pornprom Satrabhaya

Thailand's exports are likely to remain in the red in the fourth quarter, albeit at a lower rate than in the previous two quarters, amid growing concerns about a possible second wave of the Covid-19 outbreak during the cool season.

Ghanyapad Tantipipatpong, chairwoman of the Thai National Shippers' Council, said higher outbound shipments are likely during September and October because of a flood of global purchase orders for sales during the Christmas and New Year festivals. Purchases will typically drop in November and are relatively low in December, Ms Ghanyapad said.

However, if there is a fresh economic stimulus and more relief packages launched by Thailand's trading partners this quarter, Thai exporters are expected to reap gains from those measures, she said.

Ms Ghanyapad said export figures are projected to contract by 5-7% this quarter, improving from a 11-13% fall projected for the third quarter.

Shippers are bullish that a fresh US stimulus package will help boost Thai exports to the US in this quarter.

On Oct 6, President Donald Trump signalled his openness to a number of separate fiscal stimulus measures hours after announcing he had called off talks with congressional Democrats until after the election.

"If Thailand fetches $19.5 billion a month in the remaining months of the year, overall exports are likely to see a contraction of 7-8%," Ms Ghanyapad said.

On Sept 23, the Commerce Ministry reported that the value of Thai exports improved in August on a month-to-month basis and stood above $20 billion for the first time in five months.

Ms Ghanyapad said the pandemic is still weighing on export prospects for the remainder of the year, citing how many countries in Europe have reported second waves of the outbreak.

"The main risk factor is the pandemic overseas, because the winter season is coming and fears of a second wave will affect the global economy," she said. "Another downside risk factor is lower oil prices affecting the export value of finished oil and oil-related products."

The Thai economy's performance in the fourth quarter may be decided by the increasing risk of Covid-19 and the US-China trade war.

"New outbreaks will deal a further blow to many countries, so it's hard to see the Thai economy recovering because we depend a lot on the global economy," said Supant Mongkolsuthree, chairman of the Federation of Thai Industries (FTI).

Europe and the US are entering the winter season, perhaps making them more prone to Covid-19 transmissions.

Many countries and cities have begun to enforce lockdown measures again to safeguard against a potential outbreak. Scotland and Brussels have become the latest to introduce curbs on alcohol consumption after Paris bars and cafes were shuttered for two weeks.

"London is locked down. Nine zones in New York are also locked down," said FTI vice-chairman Kriangkrai Tiannukul. "The infection rates in India and Japan are also worrying."

If the global economy continues to be crippled by the pandemic, purchasing power will be gone and the manufacturing sector will bear the brunt as purchasing orders fall, especially in the export market, Mr Supant said.

If the pandemic from neighbouring counties spreads into Thailand through illegal migrant workers, the fourth quarter will become a nightmare, the FTI said.

Careful screening of foreigners travelling to Thailand and strict measures to prevent illegal entry into the country are a must for the government.

Mr Kriangkrai is also worried about the impact of the prolonged US-China trade war on the global economy, no matter who wins the US presidential election in November.

Whichever party -- Democratic or Republican -- governs the world's largest economy, the perception that China is a major threat to the US will remain unchanged, he said.

"The trade war will persist," Mr Kriangkrai said. "We just don't know whether it will ease off or escalate."

Canadian firm pulls out of Carrefour takeover after France insists 'No'