Millions of people are hungry for jobs, but do they have the skills companies will need to thrive in the post-pandemic world?

Covid-19 has left its mark on every walk of life, destroying the livelihoods of millions worldwide. While those now employed are trying to keep their jobs, many workers have already lost theirs.

Now, not only the workforce -- both employed and unemployed -- but also business organisations are trying to keep their heads above water and navigate the potential risks in the sea change in the world of work.

Since the pandemic has disrupted both the workforce and employers, there is surely a gap to be filled between employment demand and supply. While workers are looking for jobs, companies are also looking to fill the positions they need most to smoothly transition into the new world of work.

To understand what the world of work might look like in the near future -- some might say it has already arrived -- it is vital to understand what has happened and changed during the lockdown, experts say.

According to Robert Walters, a professional recruitment group, 67% of the 400 organisations it surveyed in Southeast Asia said they had imposed headcount freezes, with companies preferring to stop hiring for now.

Twenty-six percent of companies said they were allowing voluntary annual leave, and 24% said they had terminated temporary and fixed-term contracts. And while 12% of businesses have let some staff go, 35% said they hadn't made any staff changes because they are waiting to see how the situation develops, said Punyanuch Sirisawadwattana, country manager of Robert Walters Thailand.

Companies are also being forced to swiftly adopt digital transformation. "Some companies might change the way they work," she said, citing global trends such as remote working and a tendency to terminate office leases, or rent smaller spaces to create a more flexible working environment.

In Ms Punyanuch's view, some companies still lack sufficient hardware such as laptops to provide to their employees in order to facilitate remote working. "If some have the hardware, they still don't have a cloud system."

In order to create a seamless workplace in the future, "software is much in need", said Ms Punyanuch, not only because it enables employees to work from anywhere, but also because it gives employers new tools to monitor and evaluate work processes. 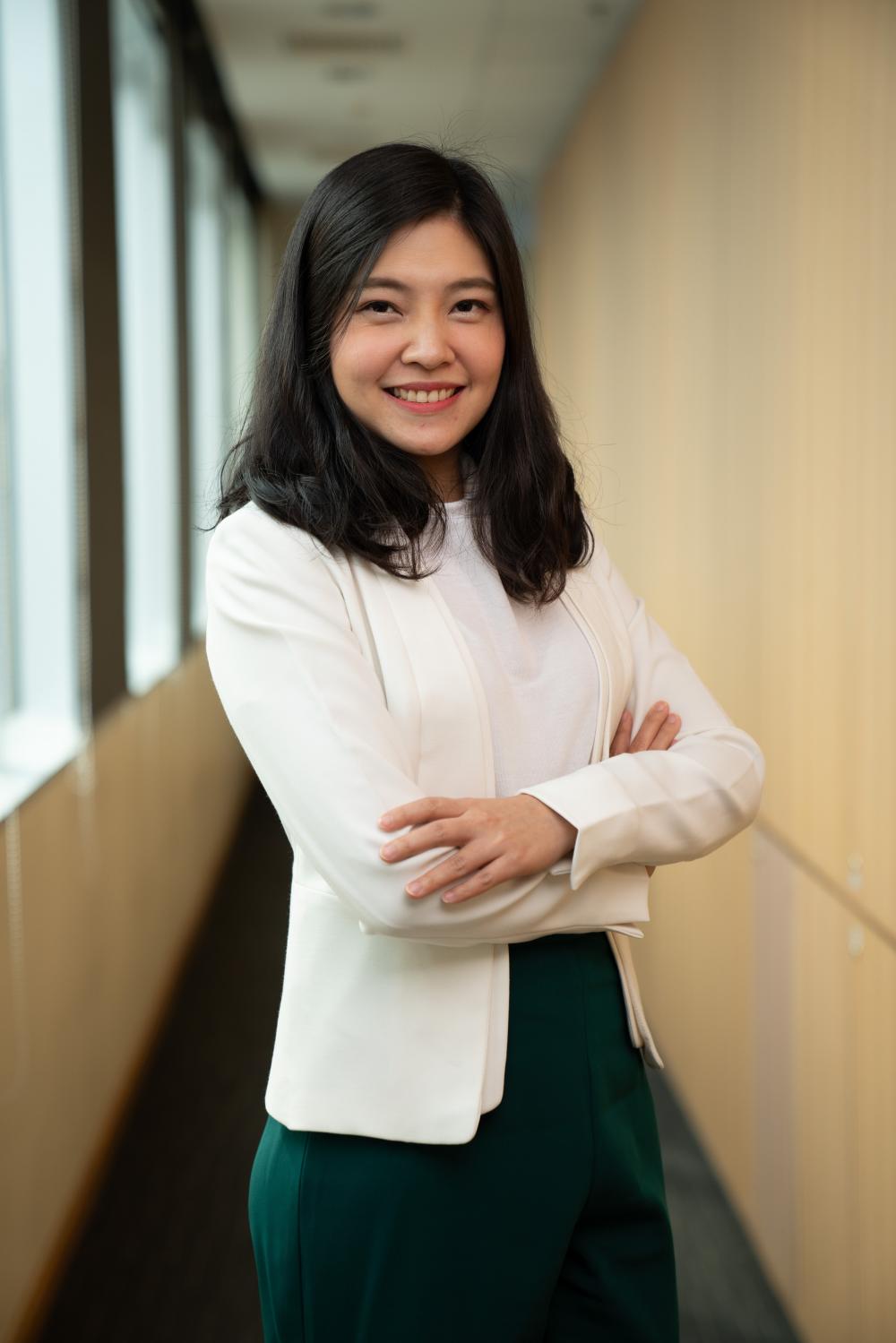 While many people think of the world of work as a world of adults, young people are underrepresented even though their contribution, particularly in Asia Pacific, is the key to productivity and inclusive development in the region.

A recent International Labour Organization (ILO) report suggested that young people (15-24 years old) have been more vulnerable during the Covid crisis than adults aged 25 and older, and will bear higher long-term economic and social costs.

Of the 633 million young people in Asia and the Pacific, approximately one in three, or 210 million, are employed, according to the ILO.

Of the remainder, 35 million are unemployed and 408 million are outside the labour market, including 17 million who are available to work but not seeking it, and those who were seeking work but unable to start immediately.

Nearly half of the region's young workers are employed in especially hard-hit sectors including wholesale and retail trade, manufacturing, rental and business services, and accommodation and food services. Given their lack of experience and a tendency to rely on insecure informal jobs, young people are more vulnerable than adults to the impact of a prolonged crisis.

Even before the coronavirus began to spread, young people were facing challenges obtaining access to decent work. The regional youth unemployment rate was 13.8% in 2019 compared with 3% for adults, according to the report.

Working hours across the region declined 7.1% in the first quarter of 2020 from the fourth quarter of 2019. That figure increased to 13.5% in the second quarter when the coronavirus hit its peak.

Young workers in Thailand and South Korea have experienced a significantly larger loss of hours than adults, the report said.

"I couldn't make ends meet due to the reduction in working hours," said Romerlee Usoh, a Bangkok-based part-time employee of a retail fashion brand that had to close its stores in Thailand amid the government-imposed lockdown to curb the virus.

During the pandemic, his hours were cut to 5 or 6 a day, and available working shifts were reduced to 3 days. Although he is fortunate to have family support during the store closure, "it's really not enough".

"Right now, it's hard to find a job. I'm waiting for the situation to get better, so I can apply for a new one," he said, though he knows he lacks the experience to get an office job because he has only been working in the service sector. 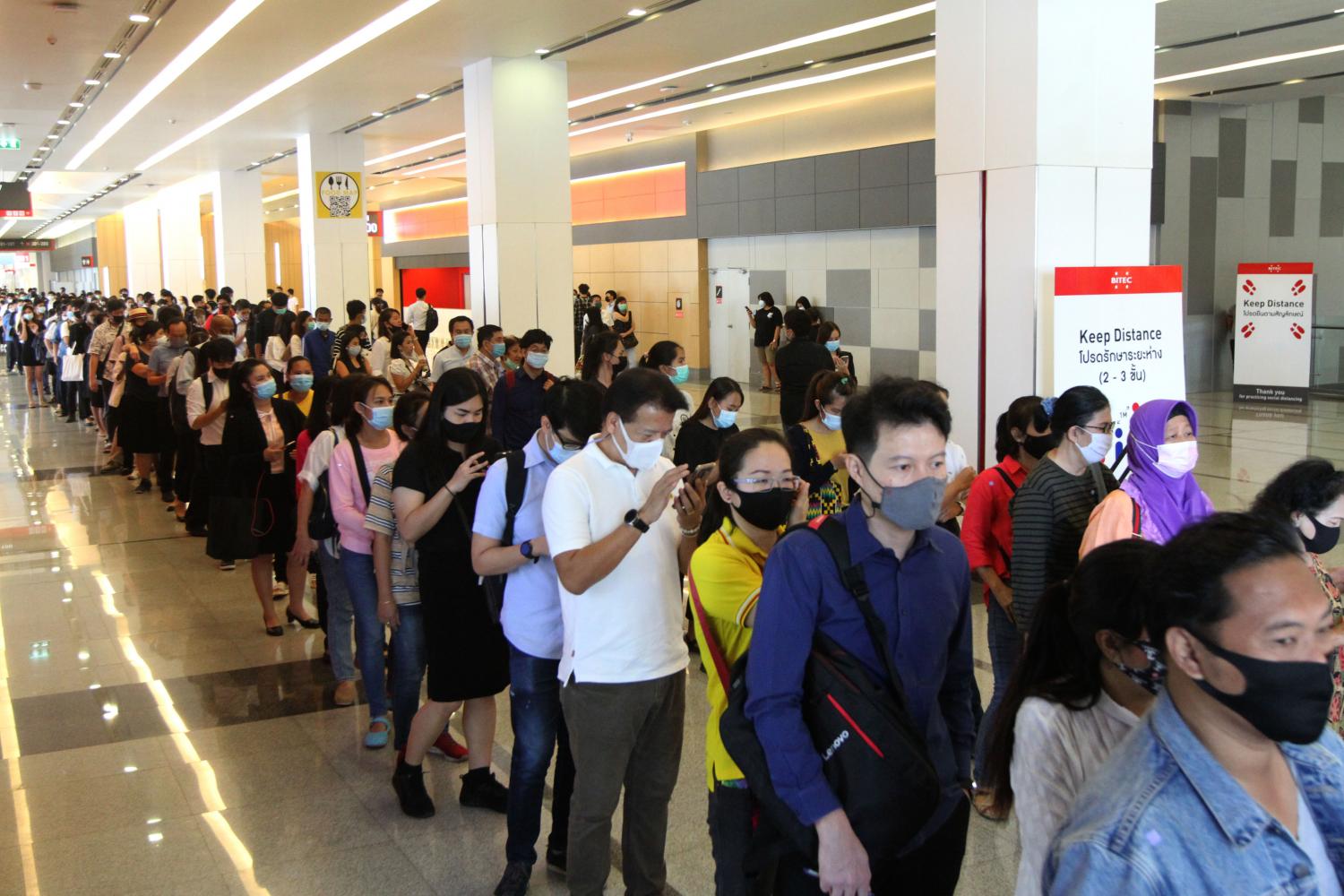 Thousands of people thronged Bitec Bangna last month for Job Expo 2020, which the government claimed was offering as many as 1.3 million positions. Photo: Wichan Charoenkiatpakul

The ILO has recommended that governments in the region urgently adopt large-scale and targeted measures to stimulate the economy, especially to tackle the youth unemployment crisis.

Support measures should aim directly at businesses in the hardest-hit sectors where youth job losses are concentrated, the report said.

The suggested responses include providing public employment programmes and youth-targeted wage subsidies, expanding job information and employment services to young job seekers, supporting apprenticeship programmes and focusing on the development of in-demand skills, through upskilling and reskilling funds, for example.

The Federation of Thai Industries (FTI) has estimated that nearly 3.4 million formal workers in the country are already unemployed as a result of the protracted outbreak. They represented about 30% of 11 million insured workers under the Social Security Fund.

By the end of this year, the number could hit 8 million -- about 21% of the workforce -- and could be even higher if informal employment such as self-employed and part-time workers are included.

Official government figures show unemployment at 1.9 million, reflecting a calculation method that doesn't give sufficient weight to underemployment -- casual work for a few hours a week.

The Ministry of Labour recently staged the three-day Job Expo Thailand 2020 to help match the unemployed with a promised 1.3 million vacancies in both government and business organisations. The ministry said the jobs on offer included positions in manufacturing (192,291), marketing and public relations (60,890), apparel and textiles (32,625), graphic design and drafting (32,024), construction (30,307), and 345,470 positions in other careers.

Labour Minister Suchart Chomklin said the expo was aimed in particular at new graduates who might struggle to find jobs due to a lack of experience.

But for one 23-year-old fresh graduate, the Job Expo didn't cover many of the fields, including science which is the area she studied.

"I thought I could apply and interview right at the job booth," she said. Instead, many company booths asked visitors to scan a QR code and fill in an online application. She was told she would be contacted later.

The expo attracted more than 120,000 people, with new graduates showing some of the highest interest. It was intended to complement the government's recently launched recruitment platform Thai Mee Ngan Tam (Thais Have Jobs), on which about 240,000 people have applied.

The Office of the Civil Service Commission (OCSC) also held its national civil service examination recently. This year, the number of applicants was historically high, with 580,000 people throughout the country seeking some 30,000 positions.

Among the hopeful candidates was a 29-year-old administrative staff employee who was laid off in March.

"I worked in the airline industry," she said. "The Chinese tourists stopped coming in March, so my company was closed around that time."

Without a salary, she and her colleagues struggled to make ends meet. "I got no compensation from the company and neither did my colleagues.

"I hope I pass the exam because civil service work has become one of my choices now," she said. "Now jobs are scarce, and having backup plans is important."

INTO THE NEW WORLD

Many of those who are still working have experienced dramatic changes in their daily routines. The most dramatic has been working from home.

While the worst of the Covid threat appears to have passed in Thailand, most companies are still allowing staff to work from home. It will take a few months for employers to get a clearer view of how remote working affects productivity, but meeting up with colleagues via Zoom or Microsoft Teams has become a way of life for many workers.

But Ms Punyanuch of Robert Walters is among those who believe the absence of face-to-face communication could have consequences for some businesses. Discussing important work matters with a group of talking heads on a laptop screen may not always yield great results.

"Communication skill is important and will be the most wanted in organisations," she said. "How can one effectively communicate without using body language which includes emotions and gestures that often happen in face-to-face communication?"

Seventy-four percent of the companies surveyed by Robert Walters said communication is the most in-demand skill in their organisation in the post-Covid world. Next came crisis management (72%), business intelligence (63%), collaboration (58%), and management and leadership (53%).

Another essential skill companies are looking for is technology competence which includes using digital information and comfortably using IT tools, such as collaborating online.

Even the way of interviewing for jobs has changed. "Video interviews are gaining in popularity," said Ms Punyanuch, adding that recruitment firms, particularly in Australia and Southeast Asia, are urging candidates to send videos along with their resumes to expedite the hiring process.

"Their preparedness to use the tools in video interviewing and the way they can communicate complex issues to simpler ones without seeing each other are what I'm looking for in a candidate," agreed Mai, a 40-year-old product manager of an IT company in Bangkok.

Ms Punyanuch further notes that mid-career professionals must keep up with rapidly evolving technology; otherwise they will not be able to keep pace with their younger digital-native colleagues.

Essential skills and qualifications such as leadership and working experience are still key factors employers look for in candidates.

However, she acknowledged that resilient and opportunistic should be the post-pandemic mindset for both young and mid-career workers. "Companies want people who show initiative with a can-do attitude."

Young workers and fresh graduates nowadays are smart and have the potential to do many things to earn a living. However, Ms Punyanuch noted that "they need to have a fierce determination" in these difficult circumstances. 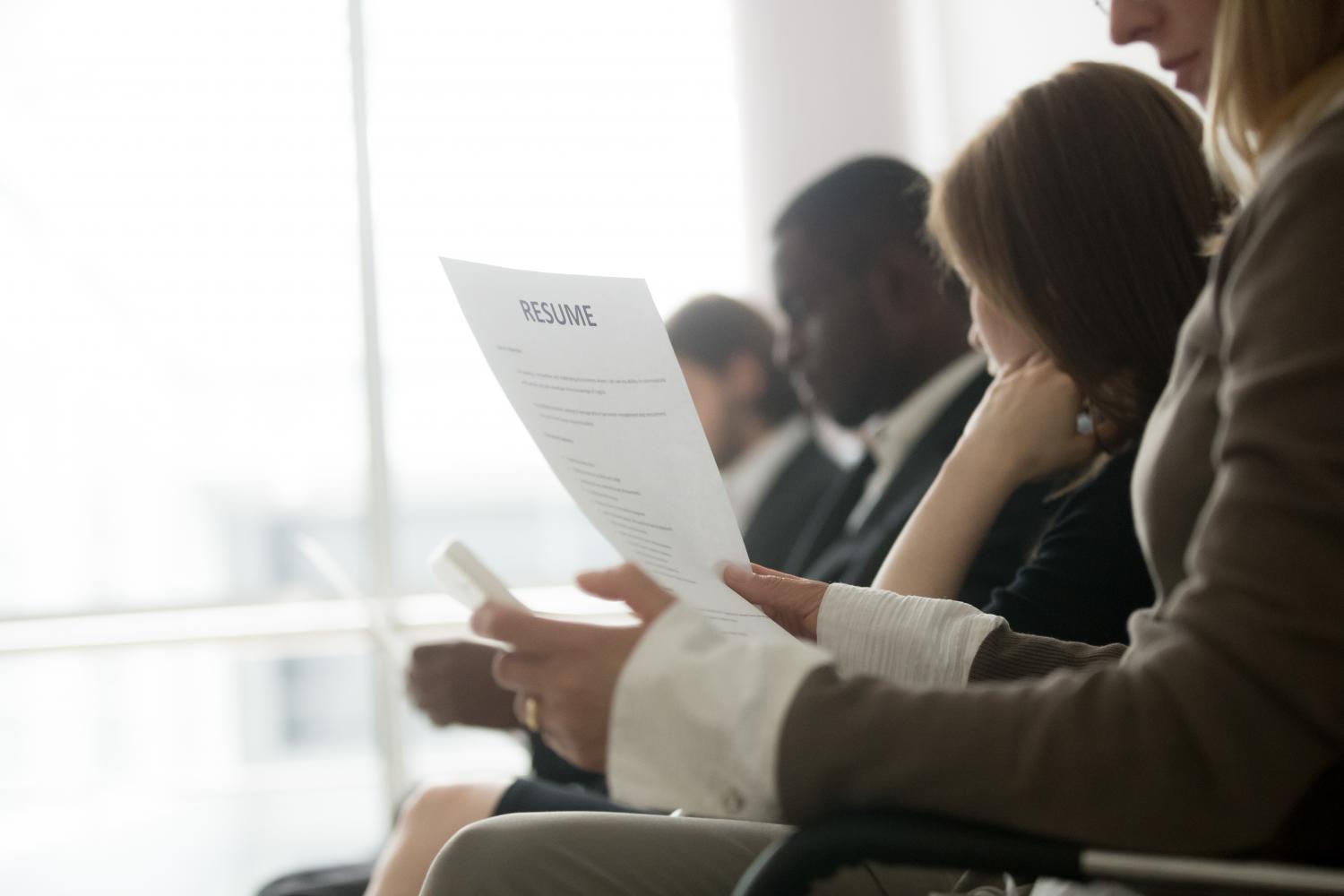