Controversial Thai Canal back in spotlight

Public hearings, study to be sped up

Pailin: Scheme is a boondoggle

The 120-kilometre Thai Canal project running from Krabi on the Andaman Sea to Trang, stretching to Nakhon Si Thammarat and Songkhla on the Gulf of Thailand, recently returned to the limelight after decades of proposals.

The National Economic and Social Development Council was ordered by the premier to speed up public hearings and begin a new feasibility study on the scheme.

The Thai Canal, or 9A canal route, is one of two development projects the government cites as key to its economic plan for the South.

The other is a double-track railway linking Chumphon and Ranong.

The government has already budgeted 10 million baht in fiscal 2021 for the state planning unit to conduct public hearings and feasibility studies for both projects.

Public hearings and studies will be carried out immediately once the budget for fiscal 2021, which started on Oct 1, is allocated.

The man-made Thai Canal is a proposed route for the Kra Canal project, an ambitious plan to cut a canal across the southern peninsula and create a vital shipping route in the region.

The idea has been under discussion on and off for several decades.

The government of former prime minister Thaksin Shinawatra reportedly approved setting up such a committee to conduct a feasibility study, but the work was discontinued after his administration was overthrown in a military coup in 2006.

In the past several years, the Thai Canal Association -- consisting of retired generals, politicians and prominent executives with Chinese ties -- pushed for the canal project's revival and tried to persuade the government to implement a version of the Thai Canal.

Pailin Chuchottaworn, chairman of the government's committee on economic steering, which is under the Centre for Economic Situation Administration, believes the project sounds impractical and unlikely to attract many global shippers to use the canal because of technical problems.

He said the sea levels in the Andaman Sea and the Gulf of Thailand vary, with the former sometimes three metres higher than the latter.

"Different water levels cause limitations in construction. The canal can be built with a width of only 40-50 metres," said Mr Pailin. 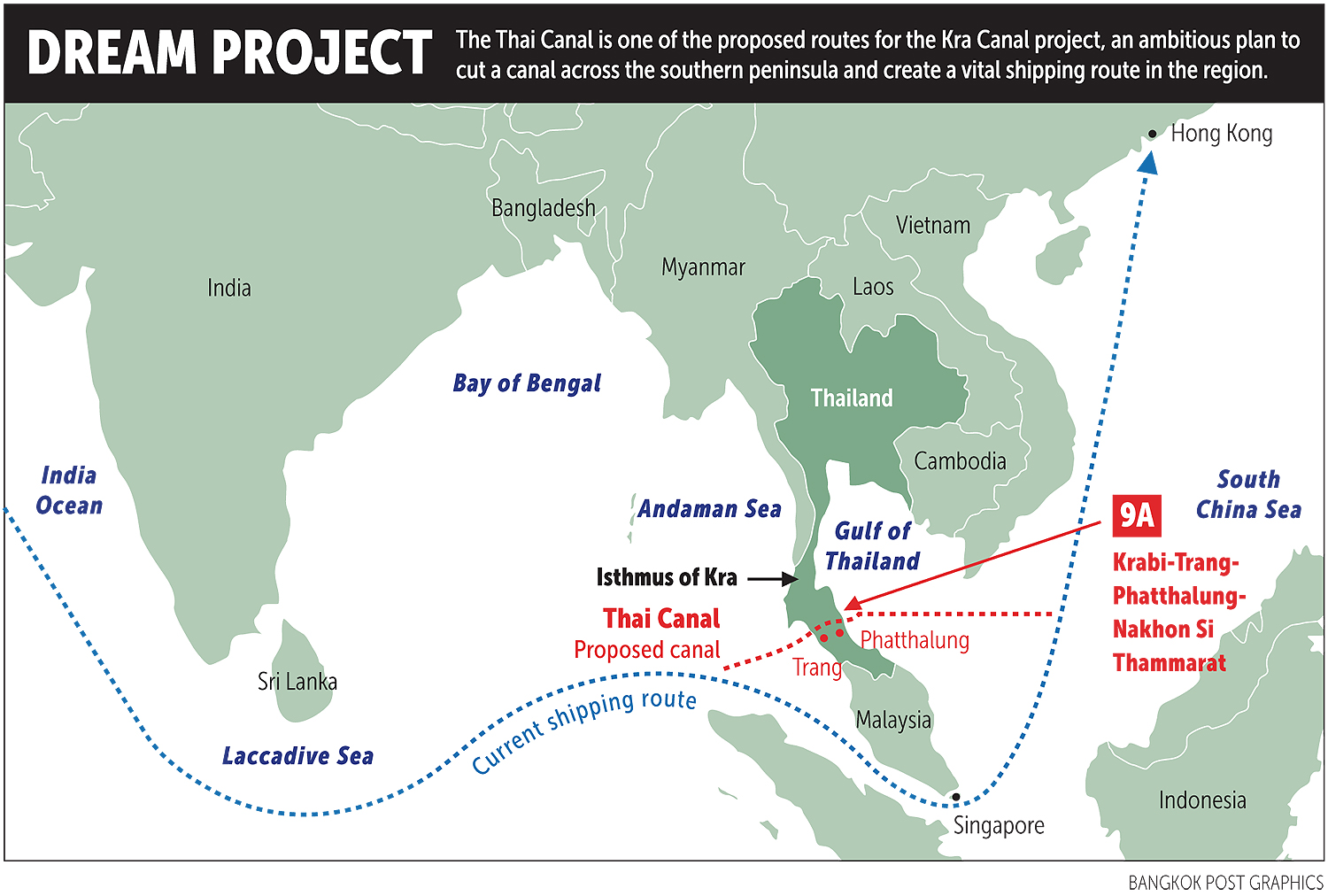 "The canal also needs to install water gates to adjust the water level, while only one ship is allowed to pass through the canal at a time."

The size of the Thai Canal is tiny compared with the Panama Canal. The Panama Canal is an artificial 82km waterway in Panama that connects the Atlantic Ocean with the Pacific Ocean and is one of the most famous channels for maritime trade.

Canal locks are at each end to lift ships up to Gatun Lake, an artificial lake created to reduce the amount of excavation work required for the canal, 26m (85ft) above sea level, and then lower the ships at the other end.

The original locks are 32.5m (110ft) wide. A third, wider lane of locks was constructed between September 2007 and May 2016. The expanded canal began commercial operation on June 26, 2016. The new locks allow transit of larger, neo-Panamax ships, capable of handling more cargo.

According to Mr Pailin, traffic via the canal will be slow because only one freighter can pass the canal at a time.

"Using the canal saves only two days of sailing [through the Malacca Straits], which is not attractive enough to draw shippers to change marine routes," he said. "Typically new routes are only attractive if they save at least five marine days."

Mr Pailin said if the canal is 40-50 metres wide, the tide will destroy the seashore and cause environmental problems.

"I think the canal project is not feasible, and will not strengthen Thai competitiveness or boost private investment in the South," he said.

"The government should rather focus on southern land bridge development, which includes a deep-sea port, motorway and double-track rail linking the Gulf of Thailand and the Andaman Sea."

According to the government's proposal, the land bridge project will stretch 100km and consist of a road and a railway to link up seaports on the Gulf of Thailand and the Andaman Sea.

According to Mr Pailin, the land bridge development or Thai Bridge project is one of the 36 large investment projects worth 1.22 trillion baht being accelerated.