After pressing pause for 75 days during the lockdown, SF is lighting up the silver screen once again.

'I believe that the cinema industry will re-emerge and come back faster and more robust than other sectors,' says Suwat Thongrompo, chief executive of SF Corporation.

While the global movie industry struggles with the fallout of the Covid-19 pandemic, cinema chain operator SF Corporation remains upbeat about the future of its business in Thailand.

"Thailand's cinema industry has confronted several waves of disruption over the past decades, from the widespread adoption of video cassette, home entertainment and cable TV to streaming services," said Suwat Thongrompo, the company's chief executive. "Up to now, the cinema business still exists while several businesses that had disrupted the cinema business have long gone."

Despite the Covid-19 outbreak, Mr Suwat remains confident that his company will overcome all obstacles by adopting a quality-over-quantity investment focus and a conservative financing approach.

"It's the first time that all cinemas had to close down simultaneously for up to 75 days [to comply with lockdown measures]," he said. "I never imagined that the pandemic would become so severe with such a prolonged duration. Nevertheless, I am not stressed, as this pandemic allowed me to pause for the first time in my career in the past 38 years. This unprecedented situation also gave me time to think and do new things I've never considered or done before." 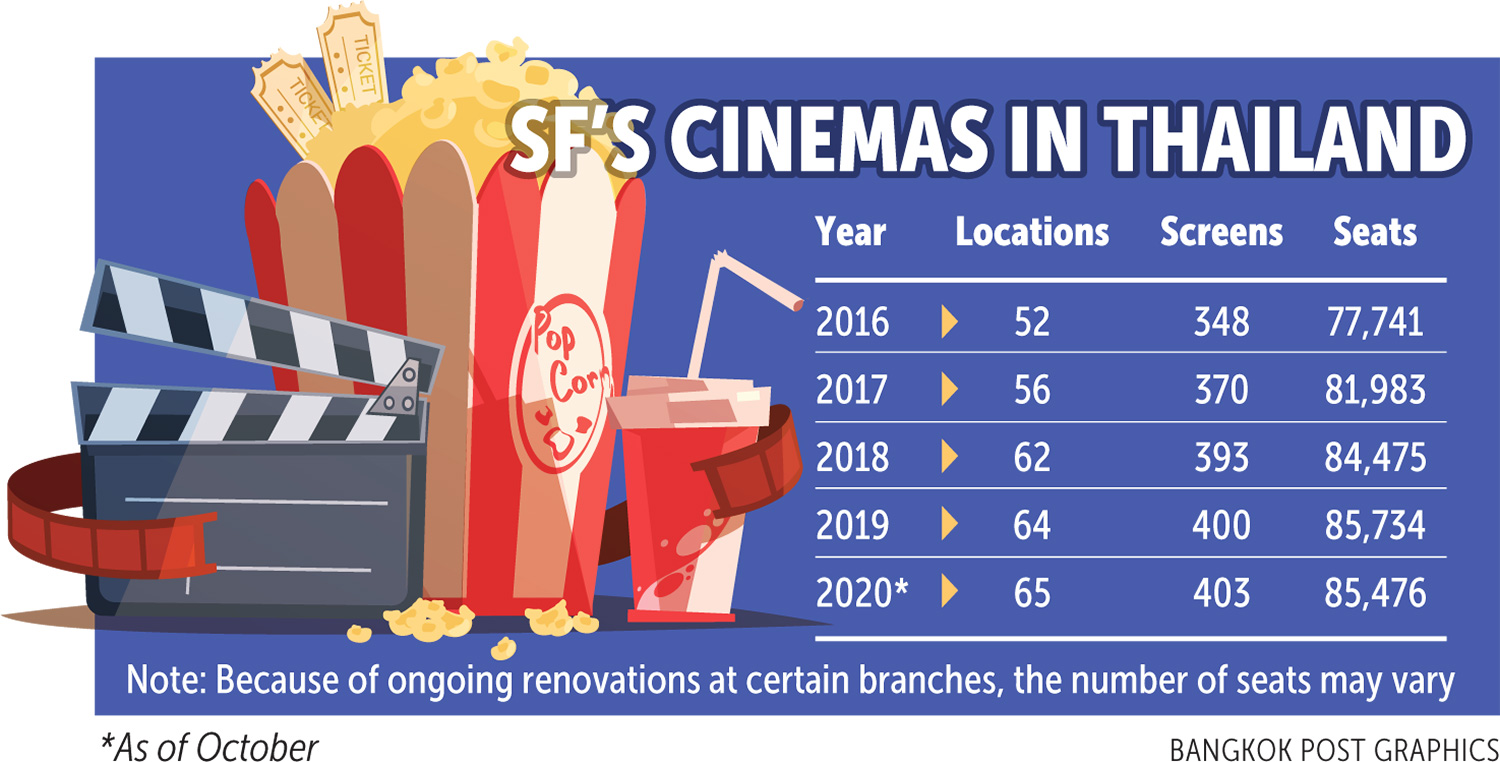 One of the initiatives Mr Suwat has launched is popcorn delivery. Despite the total closure, the company directed its cinema locations to produce fresh popcorn and deliver it to consumers through various channels.

Another initiative was the drive-in cinema, for which Mr Suwat worked with his partners to create a similar experience to watching movies in the auditorium.

"I believe that the cinema industry will re-emerge and come back faster and more robust than other sectors," he said.

SF spent 300-500 million baht to open 30-50 screens a year in the past 10 years and continued its plan this year despite the coronavirus crisis. The company now has about 400 screens nationwide.

"Nonetheless, amid the Covid-19 outbreak, we've paused some business plans while pushing forward with other projects," Mr Suwat said.

SF has added one location this year, at Robinson Lifestyle Center in Bowin, Chon Buri, in June. At the same time, the company completely revamped two existing cinemas: SF World Cinema at CentralWorld and SFX Cinema at Central Festival Phuket. Both locations have resumed operations as usual.

According to Mr Suwat, the company is renovating 15 screens at SF World Cinema at CentralWorld, to capture high-end customers.

"It will be the latest revolution of SF cinema in terms of convenience and innovation," he said. "It features services not seen in any movie theatres or luxury hotels generally. Cinema always has to elevate itself, as consumer demand changes and become more complicated. Therefore it's not easy to be disrupted purely from the technology change."

In the early stages, cinemas in Thailand opened at stand-alone locations before transforming into mini-theatres. Then came the cineplex era with cinemas in shopping malls. Cinema technology keeps enhancing the moviegoing experience both visually and audially.

Apart from the new high-end experience at SF World cinema, the company reshuffled its cinema on the seventh and eighth floors at MBK shopping centre. The theatre, box office and concession zone will have a new look. The company will complete the MBK project by early next year.

"SF has fully reopened our cinemas," Mr Suwat said. "Thailand will be one of the best cases globally for cinema to open almost 100% of total screens, compared with an average of 70-80% in the US and Europe. Some countries, such as Indonesia and the Philippines, have still kept their cinemas closed. Even though consumer spending has declined, the movie industry trend after Covid-19 is still strong, indicated by the occupancy rate of blockbuster movies such as Mulan and Tenet, which are almost as high as pre-Covid at 70-80%. However, the average turnout at SF cinema stands at 25-30% compared with the normal period.

"We see strong demand from moviegoers to get their movie experience in the cinema, but the problem is that several Hollywood films are postponed to next year. The US movie studios postponed their release because cinemas in some high revenue contribution areas such as New York and California are still closed."

SF has adjusted its strategy by focusing on local movies and Asian films from South Korea, China and Japan. Such films used to be popular among Thai audiences before attention shifted to Hollywood productions, which dominate the Thai movie market at 70-80%.

"We will focus more on local and non-blockbuster movies," Mr Suwat said. "They may not have a big-budget production or A-list celebrities, but these movies have character and value. There are many critically acclaimed movies among the non-blockbuster movies. After reopening theatres, the company is also focusing on providing a cinema hall for concerts and events as a new revenue source. We have been successfully organising many concerts and events under the social distancing policy with various partners."

At the same time, crisis will present opportunities for Thai films, according to Mr Suwat. With familiar casts, quality production and the absence of Hollywood films, moviegoers may switch to watching more local content. This would buck the recent trend: the number of Thai films released each year has declined from almost 100 titles a decade ago to 40-50 in the last few years.

Mr Suwat believes that SF's business will survive because of its cost optimisation strategy.

"If the second wave of Covid-19 doesn't take place, I believe that the movie industry will recover next year," he said. "If we can overcome Covid-19, we can overcome all obstacles."

The biggest challenge confronting SF is preserving cash flow throughout the impact of the pandemic, which may last until 2021.

Thailand's movie industry was valued at 4 billion baht in 2019. That value slipped to 600 million baht in the first nine months of this year, marking the worst box-office performance in over three decades.

The market size of the cinema business is roughly US$42 billion worldwide.

"We are quite lucky because of a dedicated team with strong collaboration and conservative financing," Mr Suwat said. "Since the beginning of the company, we have invested by focusing on quality locations more than quantity. We've never over-invested because of short-term profit maximisation, but instead sought a long-term sustainable return.

"Covid-19 has had a huge impact on the cinema business, but it also provided a lesson for me. It is the first time in 38 years that we haven't conducted day-to-day operations for 75 days. We pause, rethink and prepare to move forward with our business. People now watch the movie to entertain themselves. Movies offer more than entertainment. The two-hours duration not only creates happiness and entertainment, but also provides knowledge to moviegoers."

To that end, SF is providing unconventional selections such as documentary films at some locations, he said.