As pressure rises to reopen tourism with laxer measures, operators are growing hopeful

Khao San Road was nearly empty after the relaxation of the lockdown. (Photo by Wichan Charoenkiatpakul)

What is the real cost for tourists when planning an outbound trip to Thailand in the Covid-19 era?

Apart from sufficient budget for a quarantine facility, which for the most luxurious trip can be as high as 300,000 baht per person, tourists must consent to dedicated extra time for a 14-day quarantine -- a condition that only allows people who don't have time and money constraints to visit the country.

While high-net-worth travellers may agree to spring for vacation here, their visits will be just a drop in the ocean when compared with 1.9 trillion baht Thailand recorded last year from foreign tourist receipts.

According to data from the Tourism Authority of Thailand (TAT), the upscale market or those earning over US$60,000 a year made up less than 20% in the past five years as officials struggled to generate a healthier portion of high-end travellers.

In the past, the TAT avoided mentioning the targeted number and stressed the importance of the revenue goal instead, but volume was always in the limelight.

Since the strict lockdown was eased in the second quarter, the Association of Thai Travel Agents (Atta) has repeatedly called for a shorter quarantine period or, ideally, no compulsory quarantine to attract intra-regional travellers who don't want to spend two weeks in confinement for their four- or five-day trip.

To be specific, the association pointed to a few potential markets, the likes of China and Taiwan, that are considered low-risk countries.

If applied, the scheme would draw 100,000 travellers a month and help repair the broken tourism engine with at least 5 billion baht in revenue, Atta said.

Tour operators pledged to responsible for those tour groups to calm public concerns.

"With mandatory quarantine in place, nobody wants to visit Thailand. But if the government allows tour operators to cater those guests, I'm confident that we can contain the virus spread and reignite our economy at the same time," said Vichit Prakobgosol, Atta's president. 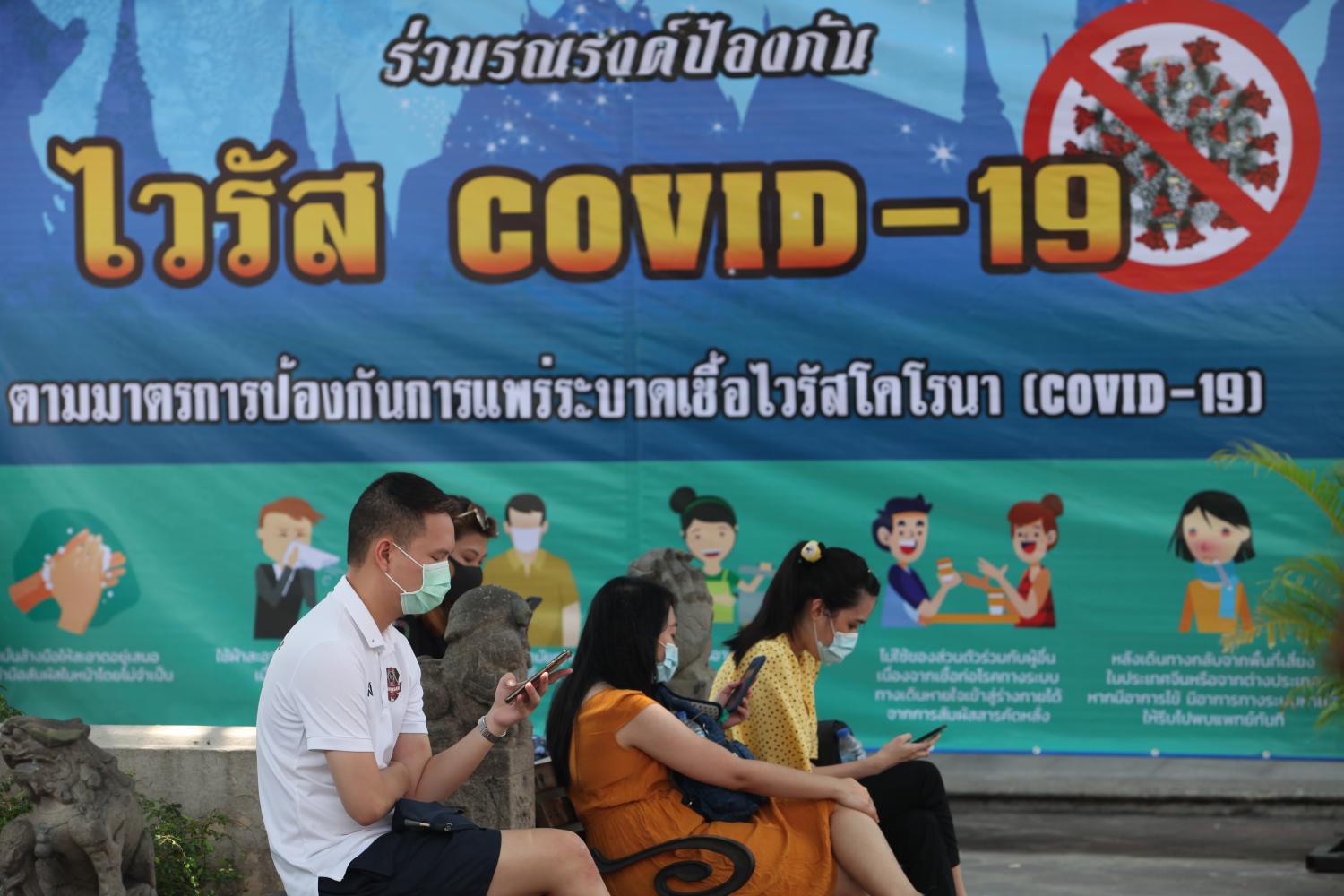 Hong Kong and Singapore recently reached agreement on a travel bubble policy, which will soon let people from those two countries travel back and forth without being quarantined.

Mr Vichit said the decision is unavoidable for any tourism-led country that wants to save itself from peril.

During the crisis, businesses that could redirect to domestic customers tended to have a better recovery pace than those heavily reliant on international guests.

Some 62.5% of travel companies have reopened, but that rate pales compared with the overall average of 78.2%, according to the latest statistics from the TAT.

A poll of 682 tourism-related operators found that 100% of car rental services have resumed business as people avoiding public transport in the wake of the pandemic, followed by restaurants (89.2%) and hotels (81.6%).

Due to international travel restrictions still in place, most (93%) tourism customers are Thais, up 31% from the pre-Covid period.

Mr Vichit said local communities should accept that special international groups allowed in earlier and those applying for a special tourist visa (STV) are not enough, as the expected number is just 1,000 per month, a far cry from the monthly figure of 3 million last year.

"The STV model with a 14-day quarantine is only a minor remedy to the large-scale devastation of the tourism industry," he said.

The Atta president insisted that achieving 100,000 tourists is not a far-fetched goal, given that in a normal situation tourists from low-risk countries total at least 1 million per month.

"If just 10% of them return, the tourism industry and overall economy will rebound," Mr Vichit said. "At present, there're many cities that are free from the virus for longer than 60 days, so why can't we start with a few of them."

He said there's also pent-up demand from tourists who have been travelling domestically -- a noticeable trend shown during this month's Chinese National Holidays, which spurred 650 million trips in the mainland. 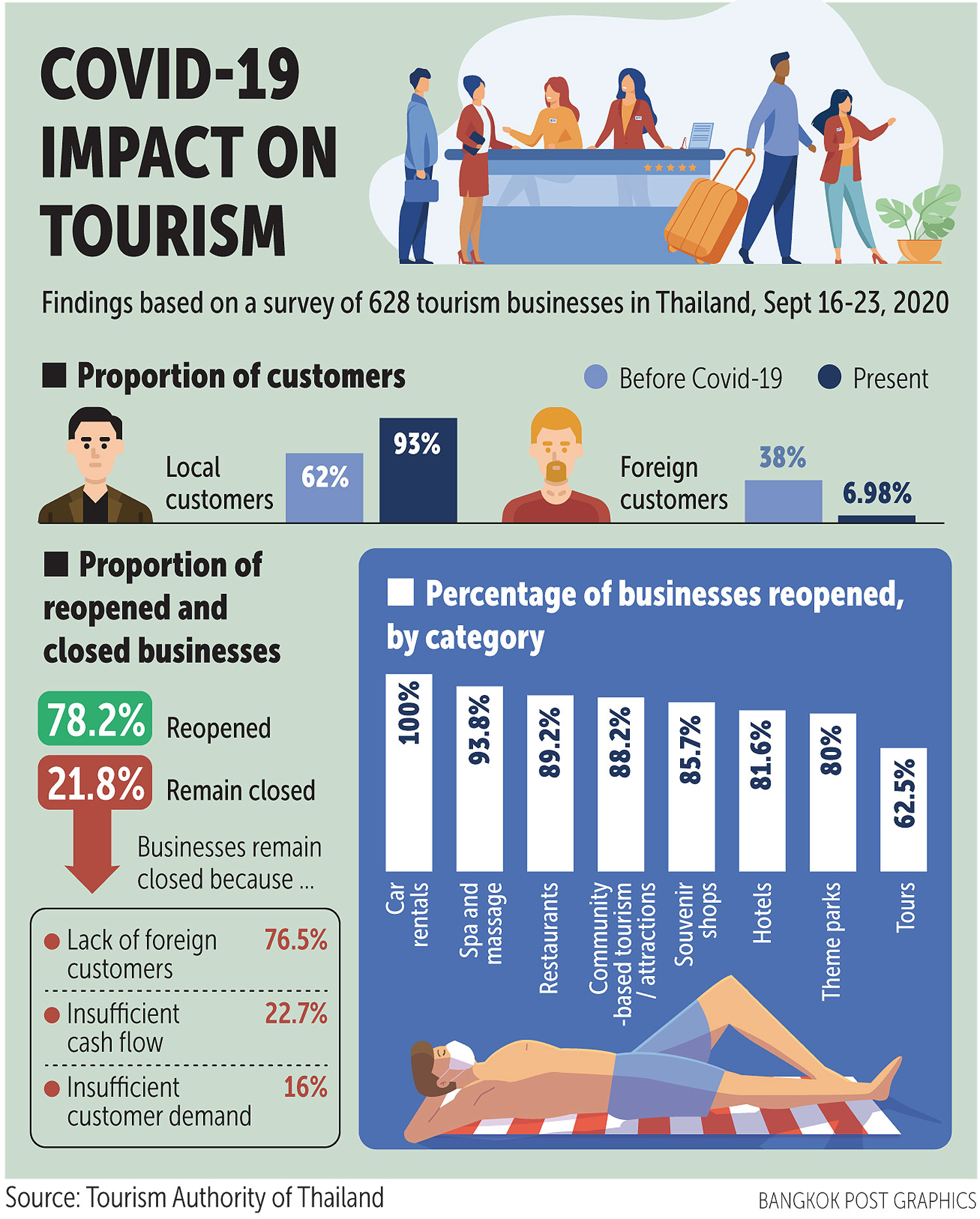 There were positive signs for tour operators last week when the Public Health Ministry floated the idea to shorten the standard quarantine period from 14 to 10 days for visitors from low-risk countries, including China, Taiwan, New Zealand and Australia.

The risky attempt is seen as an effort to drive the tourism engine amid negative factors awaiting this quarter, such as the end of the first-phase debt moratorium period for small and medium-sized enterprises on Oct 22.

Tony Fernandes, chief executive of AirAsia Group, said keeping borders closed is not a solution in a globalised world, as Thailand and most countries in Asean depend on tourism.

Testing on arrival without a mandatory 14-day quarantine is the preferred solution for post-outbreak travels.

A strong contact tracing app is also important to detect people who have been in close contact with Covid-19 patients, in case the number of cases start to flare up.

"At some point, countries have to take a little bit of risk to reopen, as we cannot live in a cave for the rest of our lives," Mr Fernandes said.

"We have to live with this virus as we have with others before like the common cold or dengue," Mr Fernandes said.

While the airline waits for borders to reopen after the outbreak, AirAsia has to focus on the domestic market as demand for short-haul work and travel still persists.

Mr Fernandes said air travel will not change much relative to the impact of the 9/11 attacks, which demanded airlines adapt to new strategies.

Still, there are a lot more health-related regulations to be added to deal with the situation, he said.

Opening the country to foreign visitors may not necessarily be an economic booster, but it is an attempt to learn how to deal with Covid-19 risks that transcend frontiers, said Tanit Sorat, vice-chairman of the Employers' Confederation of Thai Trade and Industry (EconThai).

The relentless spread of Covid-19 in many countries, including the US, India and Myanmar, and the revival of the disease in European countries like Britain, makes it hard to predict if this is the right time for international tourism.

Mr Tanit said he is "not confident" tourists will enjoy a trip to Thailand while businesses in their countries are slammed by the pandemic.

The number of foreign travelers is likely to be small relative to pre-Covid figures. Arrivals will stimulate the economy only for some local business operators and in certain areas, Mr Tanit said.

"Opening the country to thousands of tourists cannot immediately restore the Thai economy, as we usually welcome 3 million tourists on average per year," he said.

But this does not mean the entry for foreign visitors should remain shut.

The government should open the country as an "experiment" to see how it can manage risks, he said.

"But they must be quarantined for 14 days," Mr Tanit said.

For foreign businessmen who only come to Thailand for errands or contract signing, the government should hold business meetings for them inside state quarantine venues, he said.

The Federation of Thai Industries (FTI) agrees that the 14-day quarantine is appropriate if the government allows international arrivals to resume.

"Opening the door to foreign tourists will put Thailand at risk of a second outbreak, but the economy needs restoration," said Kriangkrai Tiannukul, the FTI's vice-chairman. "The 1.9-trillion-baht stimulus programme to help the economy is not enough."

Analysis from health experts at the Centre for Covid-19 Situation Administration (CCSA) are needed to help the government strike a balance between disease prevention and economic rehabilitation.

"The government cannot listen only to the CESA," said Mr Kriangkrai, referring to the Center for Economic Situation Administration. "They need to heed facts and recommendations presented by both groups."

Authorities must make careful decisions because some business people are calling on the government to relax measures to screen foreigners.

Harald Link, chairman of B.Grimm Group, Thailand's oldest trading conglomerate, suggests the government relax the measures so that Thailand can remain attractive to foreign businessmen planning to invest in the country.

These investors are looking for new locations to set up their production bases in Asean, so "if the measures are too stringent, our economic development may be affected", he said.

Flights to Thailand have become scarcer compared with those to Vietnam, not to mention the cheaper electricity rate in the neighbouring nation catching investors' eyes, Mr Link said.

If lenient measures lead to another domestic outbreak, it should not be difficult to curb the problem, he said.