The recent commercial launch of 5G promotional packages by two major mobile operators is expected to raise their average revenue per user next year.

The recent commercial launch of 5G promotional packages by two major mobile operators is expected to raise their average revenue per user (ARPU) by 5-10% next year, according to an industry analyst at Kasikorn Securities (KS).

The industry is recording more mobile prepaid customers migrating to postpaid services, which could be a boon for the operators' revenue. 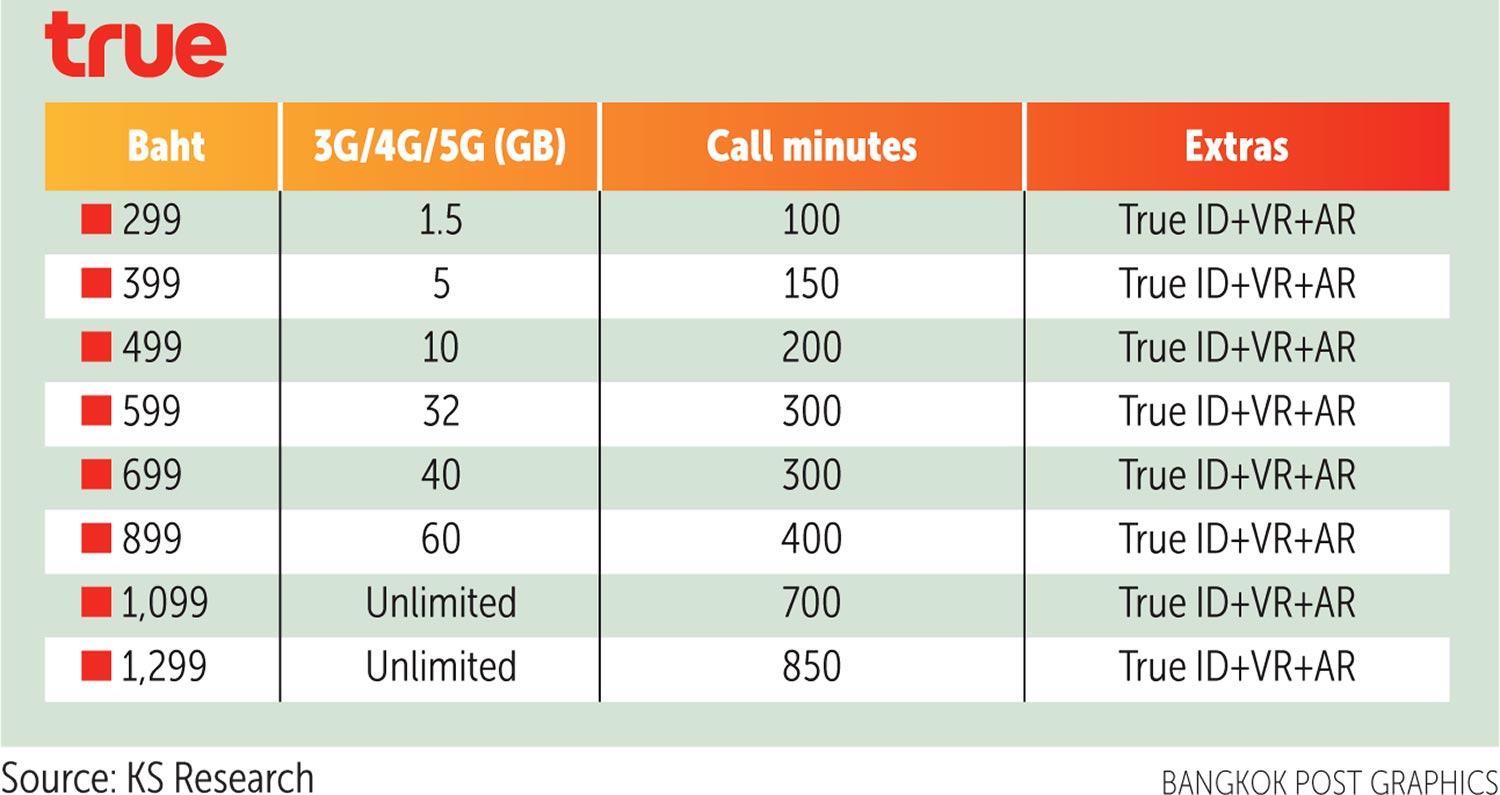 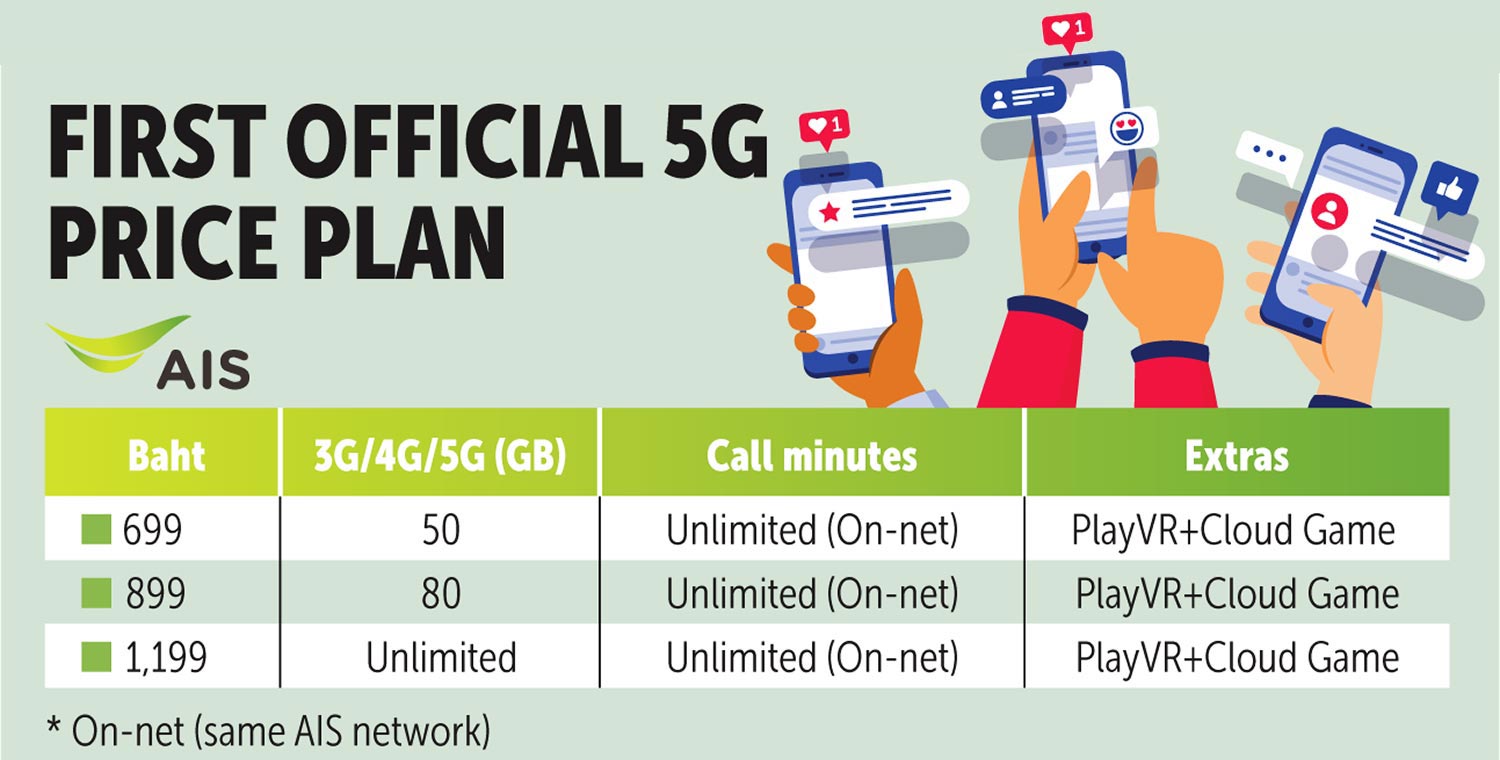 Two years ago, postpaid subscribers accounted for only 15-20% of the total customer base, generating 40% of total revenue for operators.

"KS has a positive view of the expansion of the industry's ongoing postpaid subscribers and postpaid revenue," Mr Pisut said.

AIS's 5G packages are about 100 baht more expensive than those for 4G services with unlimited data usage and maximum download speeds.

He said True management told an analysts' forum its 5G packages are not ready yet for the mass market, serving a niche online market for a short period of time.

TUC's official 5G packages are likely to be launched soon.

Mr Pisut believes TUC's official 5G packages will have key features similar to AIS's 5G packages, which could lead to "5-10% ARPU uplift" for the operators.

For 4G tech, video content is the main focus, while for 5G, AIS and TUC have come up with new apps that incorporate augmented reality, virtual reality and cloud games as well as e-sports, he said.

Such features have drawn strong attention from customers in foreign markets, such as South Korea.

He said competition among 5G packages appears less intense than when 4G packages were promoted in the initial stage from 2016-2017.

There are three reasons behind this, said Mr Pisut. First, there are still no major 5G killer apps in the market for consumers or enterprises.

In addition, the 5G spectrum licences acquired by operators at auctions in February are cheaper than those for 4G, meaning the operators are not forced to bring 4G customers to 5G services as quickly as during the shift from 3G to 4G, he said.

Citing a KS survey, Mr Pisut said there are 15-20 smartphone models in the market that are 5G-compatible, with prices ranging from 11,990 baht to 89,990 baht, suitable for upper-middle to high-end customers.

Total Access Communication (DTAC), the country's third largest mobile operator by subscribers, has yet to launch a commercial 5G service on its spectrum ranges.

Without 2600 megahertz mid-range spectrum for 5G service, DTAC is in a difficult situation and risks losing its upper-middle to high-end customers to bigger rivals, he said.

It remains uncertain when DTAC will obtain the telecom regulator's permit to upgrade its 4G service on TOT's 2300MHz range under a partnership contract for 5G service, which could help beef up its competitiveness in the market.

DTAC has two options to embark on 5G service, Mr Pisut said. It may operate 5G service on the 700MHz range only, or it may opt to run the service on both 700MHz and 2300MHz ranges.

If DTAC decides to focus on 4G services with a competitive pricing strategy, this could take a toll on ARPU in the postpaid system for the whole market, he said.

AIS chief executive Somchai Lertsutiwong said some 15 mobile handset models available in the country are 5G-compatible and around 150,000 units have been sold.

AIS began sending signals on the 5G network on Feb 21 and embarked on the soft launch of the ultra-fast internet technology in March, allowing its subscribers who own 5G-enabled smartphones to experience 5G speed capability without charge for 10 gigabytes per month.

Half million illegals tipped to register