The gloomy atmosphere at Siam Square in central Bangkok on April 22 as the coronavirus outbreak slammed the local economy. (Photo by Nutthawat Wicheanbut)

With the economic malaise caused by the pandemic more than likely to persist over the next few years, there is a higher possibility businesses will be stricken with a high-pitch fever, gradually turning them into zombie companies.

The term originated in Japan to describe companies that were only generating enough cash to pay interest on their debts, also meaning an uncompetitive company that needs a bailout to successfully operate.

These companies do not earn enough to reduce the principal amount of their debt.

The top 5% of companies by revenue account for 85% of Thailand's business sector revenue, while medium-sized companies have been restricted in accessing funding and small firms have low productivity, according to the Bank of Thailand's think tank.

The revenue concentration in these large companies has lingered for more than 10 years, said Archawa Paweenawat, principal researcher of the Puey Ungphakorn Institute for Economic Research (Pier).

Market power has an adverse impact on efficiency in resource allocation, discouraging investment to improve productivity and weakening motivation and exportability.

Industries that have a high number of zombie companies include construction, hospitality, sports and recreation, education and basic metal production. 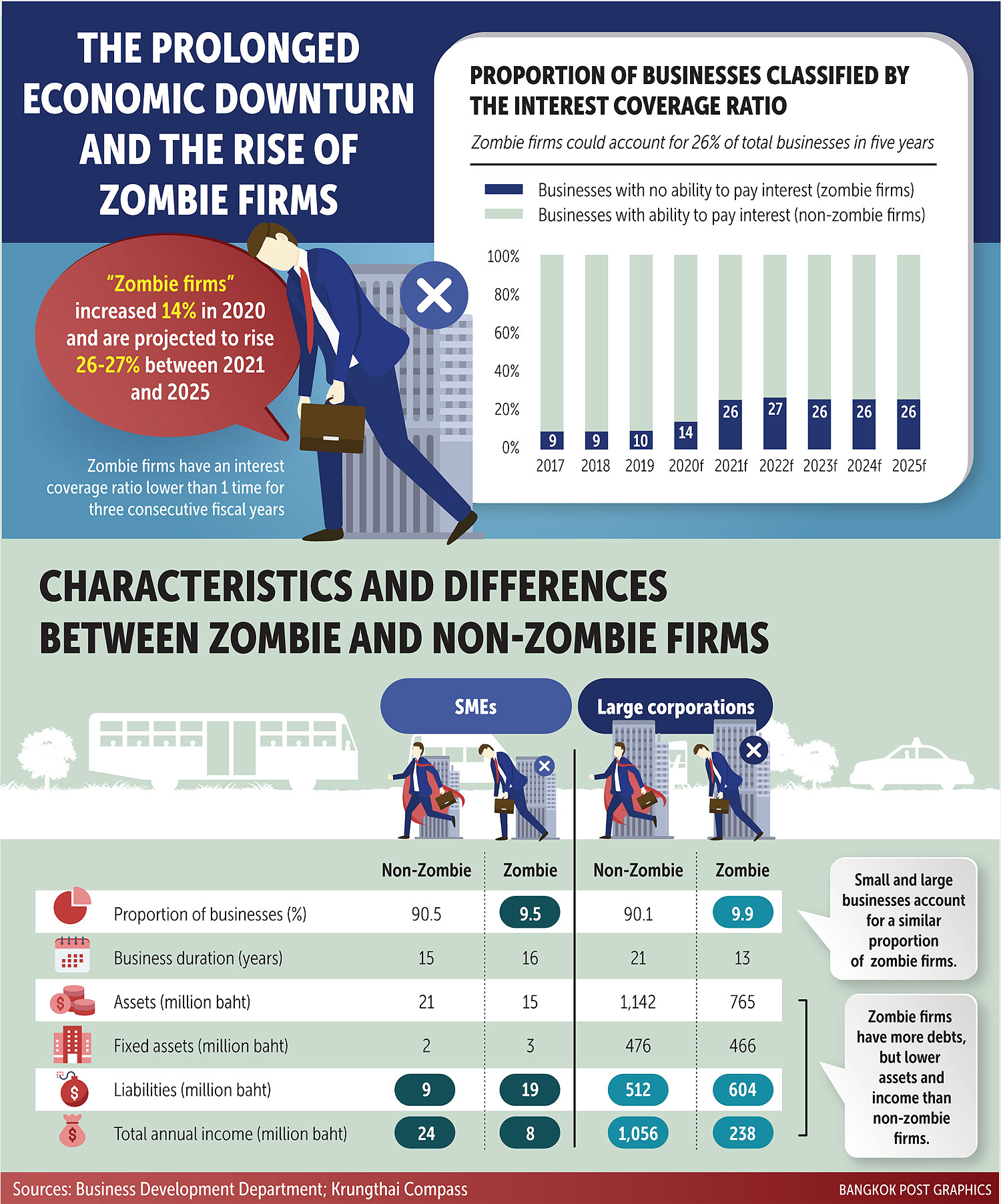 A protracted economic downturn means the earning ability of companies could be depressed, limiting them from servicing their liabilities.

2021 will remain a challenging year for Thai businesses, despite the projected improvement in dealing with the pandemic's economic impact in Thailand, said Krungthai Compass, the think tank of Krungthai Bank.

With sales poised to decline by as much as 9% in 2020, this will depress debt-servicing ability in 2021 following the end of debt relief measures, said the research house.

An analysis of financial statements of more than 200,000 companies found the interest coverage ratio (ICR), which reflects the extent businesses have sufficient operating profits to pay their interest burden, will drop from 3.62 times in 2019 to 3.11 times in 2020, said Krungthai Compass.

It will take at least three years to return to the same level of debt servicing, the think tank projected.

In addition, businesses with insufficient operating profit to pay interest or having an ICR of less than 1 time will make up 28-30% in the next 1-2 years, said Krungthai Compass.

"The economy looks to be sluggish for the long term and may result in a prolonged stretch where businesses have an ICR of less than 1 time for three consecutive fiscal years," said Phacharapot Nantharamas, executive vice-president of Krungthai Compass.

Hotels, restaurants and real estate companies stand out in terms of having the potential to be sickened with a long stretch of being unable to pay back the principal on debt, said the think tank. 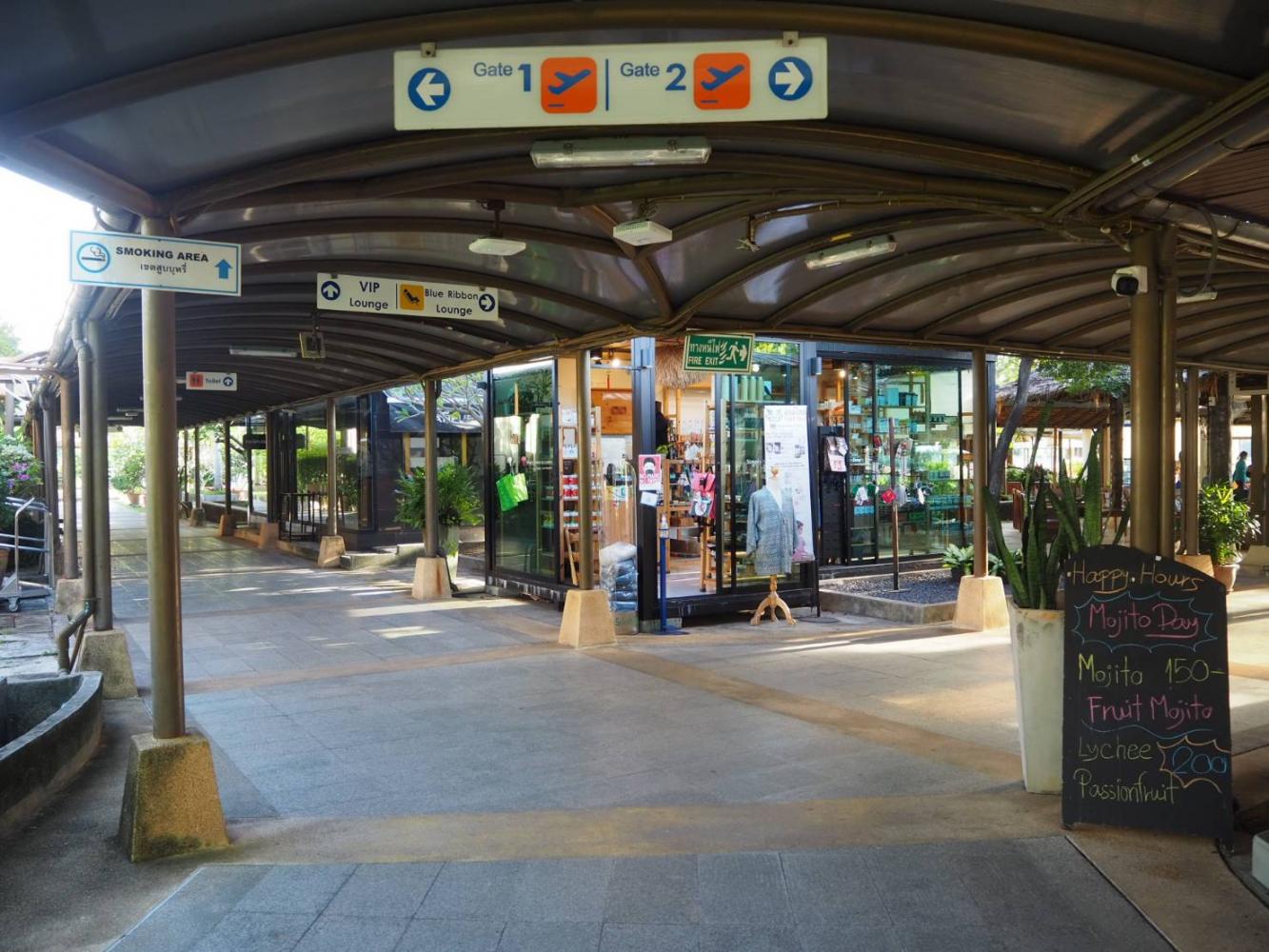 Samui airport is empty during the tourism slowdown. The industry is reeling as foreigners are required to observe a 14-day quarantine upon entry. Dusida Worrachaddejchai

The tourism industry has been one of the hardest-hit sectors, and none of the operators can escape financial distress because foreign tourists have disappeared.

Marisa Sukosol Nunbhakdi, president of the Thai Hotels Association, said hoteliers can withstand the drought for about six months, as every hotel faces different financial constraints depending on their cash flow and debt burden.

At this moment, around 70-80% of 14,000 registered hotels nationwide have reopened, though most are not back to full operations because of soft domestic demand.

Mrs Marisa said nearly all hotel operators are not at a break-even point, which means most of them do not have the ability to pay debts or interest due because they are recording operating losses.

If the government can help them gain more stable income by cutting the quarantine period to attract tourism demand, there is hope for operators to avoid becoming a zombie business, she said.

"We cannot assess the exact number of so-called zombie operators in the industry," said Mrs Marisa.

"But I would say most of us definitely don't have enough income to cover debt repayment."

Debt is mounting while tour operators do not know when international tourists will return, leaving them desperate for a lifeline as they burn through cash every day, said Chotechuang Soorangura, vice-president of the Association of Domestic Travel.

Mr Chotechuang said the worst-case scenario is expected early next year when more tour operators realise they cannot maintain their business as depreciation expenses are rising on a daily basis.

He said most domestic tour operators that can still operate are family-run enterprises, where family members run the company without having to worry about payroll for employees.

Still, this arrangement cannot last for the long term as long as there is a lack of balance between fixed costs and receipts, said Mr Chotechuang.

"Tour operators that own a bus fleet will feel more pain as they have to pay high maintenance costs after sitting them idle for months," he said.

"If they have to carry those assets for years without being used, they may not gain any profit from the fleet, as some of their clients from Europe have clear regulations that they will not use buses that are more than five years old."

This bitter perspective is shared by inbound operators, as most of them are on a holiday of unknown duration.

Vichit Prakobgosol, president of the Association of Thai Travel Agents, said almost 90% of inbound operators out of a total 10,000 companies remain temporarily closed.

If the country cannot find a safe and effective way to bring back foreigners without requiring quarantine, half of the inbound companies are expected to close permanently by the first quarter next year, he said.

Mr Vichit said even though tourists are trickling in through the special tourist visa, the minuscule amount cannot satisfy the supply chain.

The 14-day mandatory quarantine may be deterring potential tourists from visiting the country, especially those from short-haul markets, he said.

Tourism businesses welcome the idea of reducing the quarantine period for inbound tourists from low-risk areas to 10 days, gradually reduced to seven days, then eventually no quarantine would be required, said Mr Vichit. 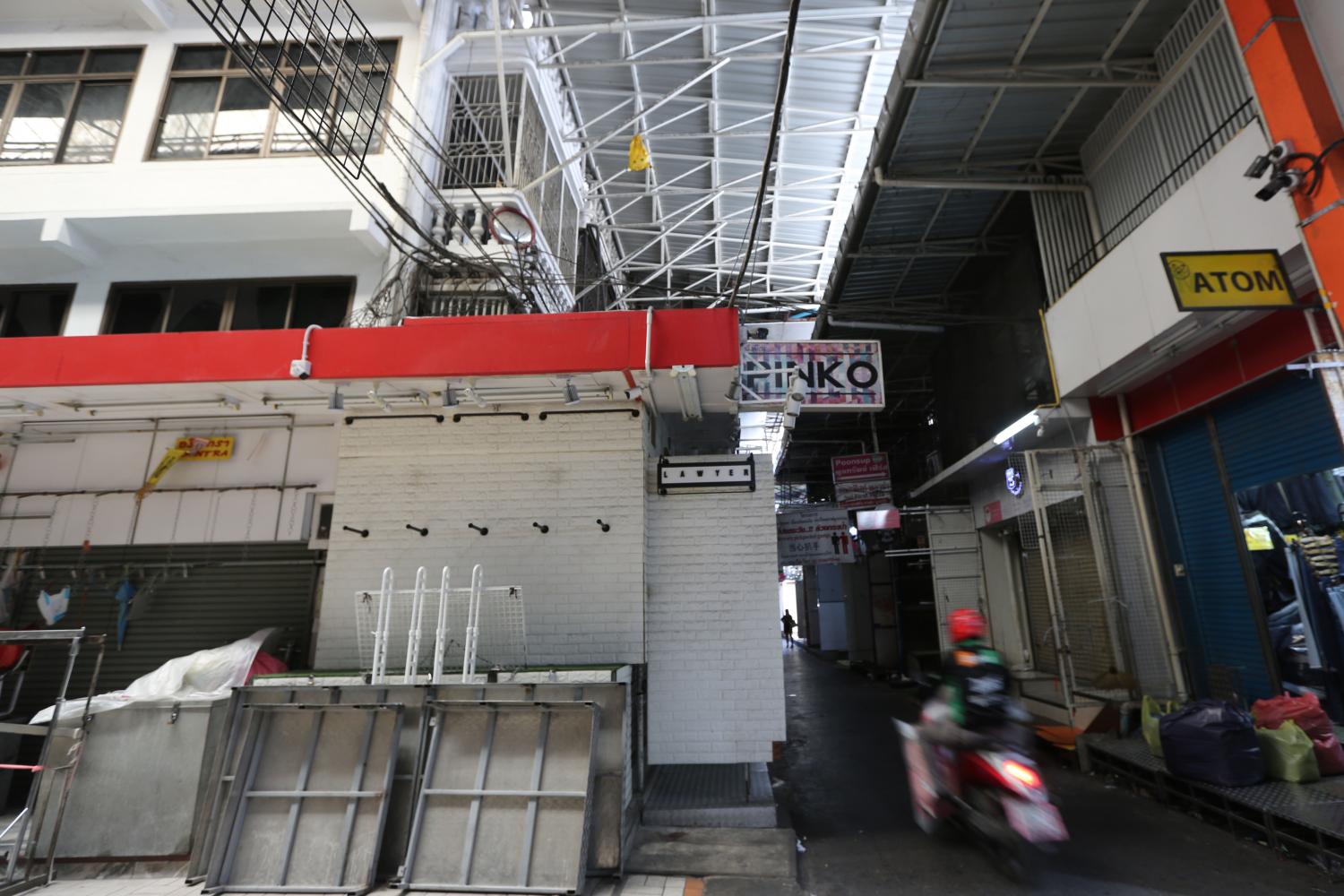 The gloomy atmosphere at Pratunam market amidst the lockdown earlier this year. WICHAN CHAROENKIATPAKUL

The Federation of Thai Industries (FTI) sees the majority of zombie companies in the tourism sector and is worried the collateral damage may spread to other businesses.

FTI deputy chairman Kriangkrai Tiannukul said companies that are half-dead and half-alive are those in the tourism industry and related businesses. The latter sells products and services to the tourism sector, so it is also feeling the pinch.

But unlike zombie companies that helplessly wait for a government cure because of their total dependence on foreign tourists, manufacturers and retailers are trying to adapt by steering their business away from tourism, he said.

"Some have decreased their production in response to fewer orders, while some make new products for new markets instead," said Mr Kriangkrai.

The problem is they do not earn as much money as they previously racked up in the tourism sector, he said.

"This limits their choice of options and they may become zombies while waiting for state aid."

The FTI said it does not have information and types of small and medium-sized enterprises (SMEs) that have turned into zombie companies. It can only evaluate the overall impact on SMEs.

However, the federation's honorary president Chonrungsee Chalermchaikit said her group is planning to gather information on SMEs that entered debt restructuring programmes after the state-initiated debt moratorium scheme expired on Oct 22.

The Bank of Thailand decided not to prolong debt relief measures, but encouraged commercial banks to help borrowers who cannot pay debt normally to take part in restructuring on a case-by-case basis. 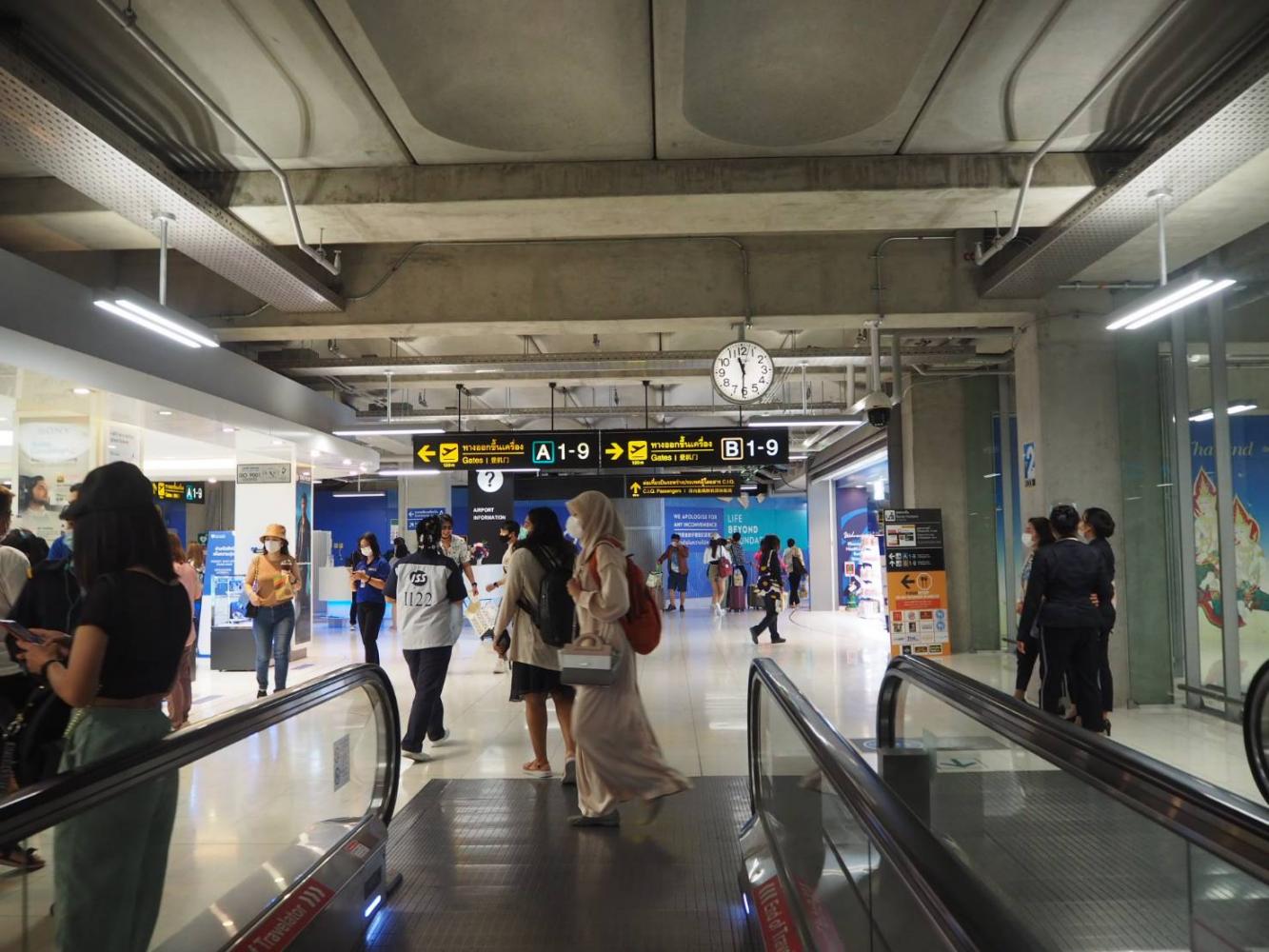 Local tourists at Suvarnabhumi airport during the weekend. Dusida Worrachaddejchai