Jury still out on BoT measures

A woman gathers banknotes at Bangkok Bank's headquarters on Silom Road. The baht has appreciated significantly following the US presidential election. (Photo by Somchai Poomlard)

The strengthening of the value of the baht is putting the Bank of Thailand in the hot seat again as an influx of offshore fund flows move into emerging market economies, spelling trouble for the export-reliant country.

The baht has appreciated rapidly against the US dollar following risk-on sentiment based on the outcome of the US presidential election and progress in the development of Covid-19 vaccines.

A stronger baht is not desirable, especially for exporters as the value of exports will be less competitive compared with other currencies, subsequently offsetting the momentum of the economic recovery.

To further mitigate pressure on the currency and to address structural issues in the Thai foreign exchange market, the central bank has implemented three additional measures.

This should enable exporters to effectively manage liquidity and foreign exchange risk.

The second measure relaxes the regulations regarding investments in foreign securities. Retail investors are now allowed to invest up to US$5 million per year, up from a previous limit of $200,000. 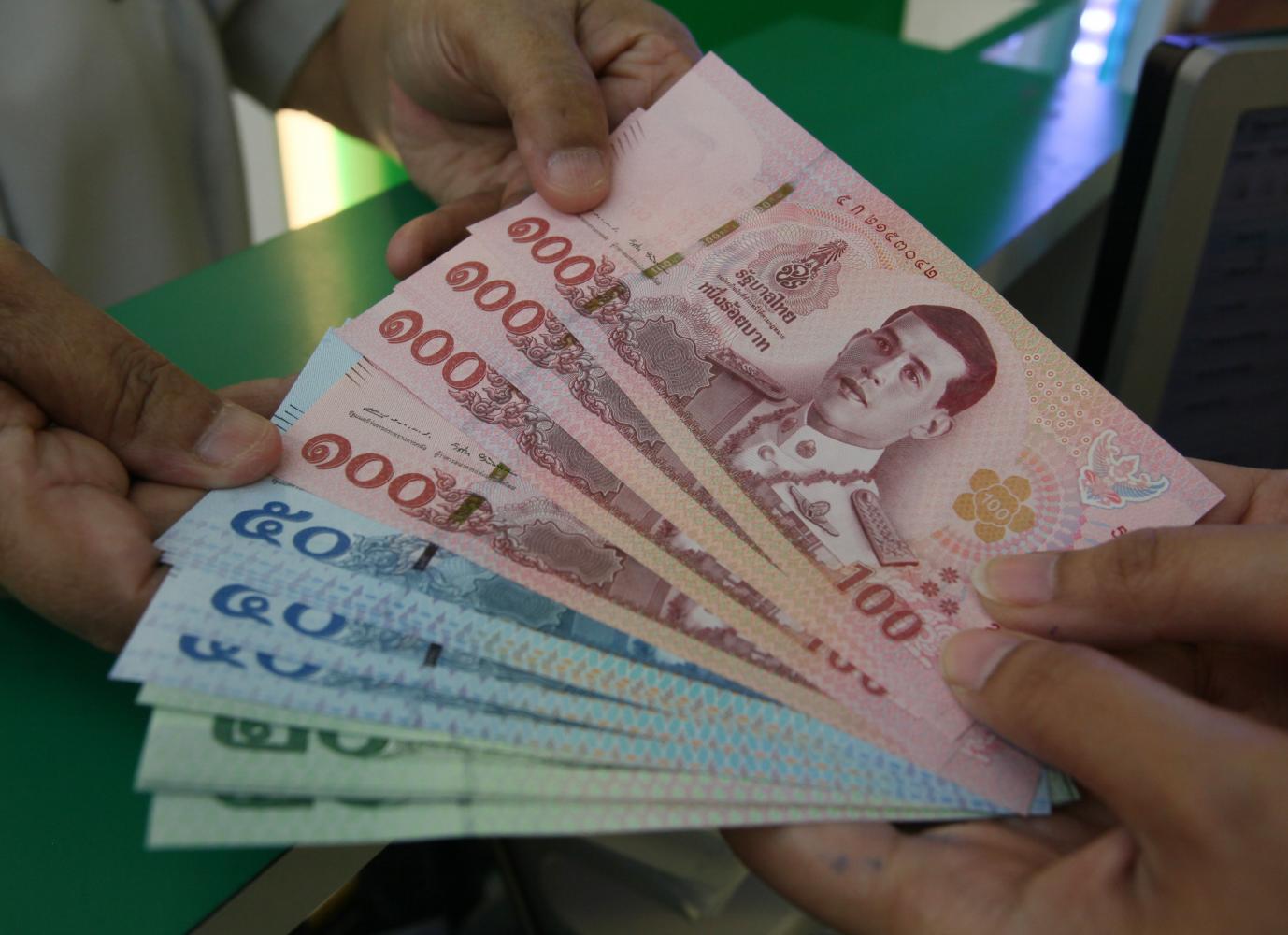 There is no investment limit via local financial institutions such as brokerage firms and asset management companies.

This measure also removes previous investment limits on foreign assets for investors regulated under the Securities and Exchange Commission, and allows the listing in Thailand of foreign securities such as exchange-traded funds.

The last measure stipulates investors are required to complete a registration process prior to investing in Thai debt securities, known as bond pre-trade registration.

However, some people are doubtful as to the extent to which these measures could rein in the baht's appreciation. 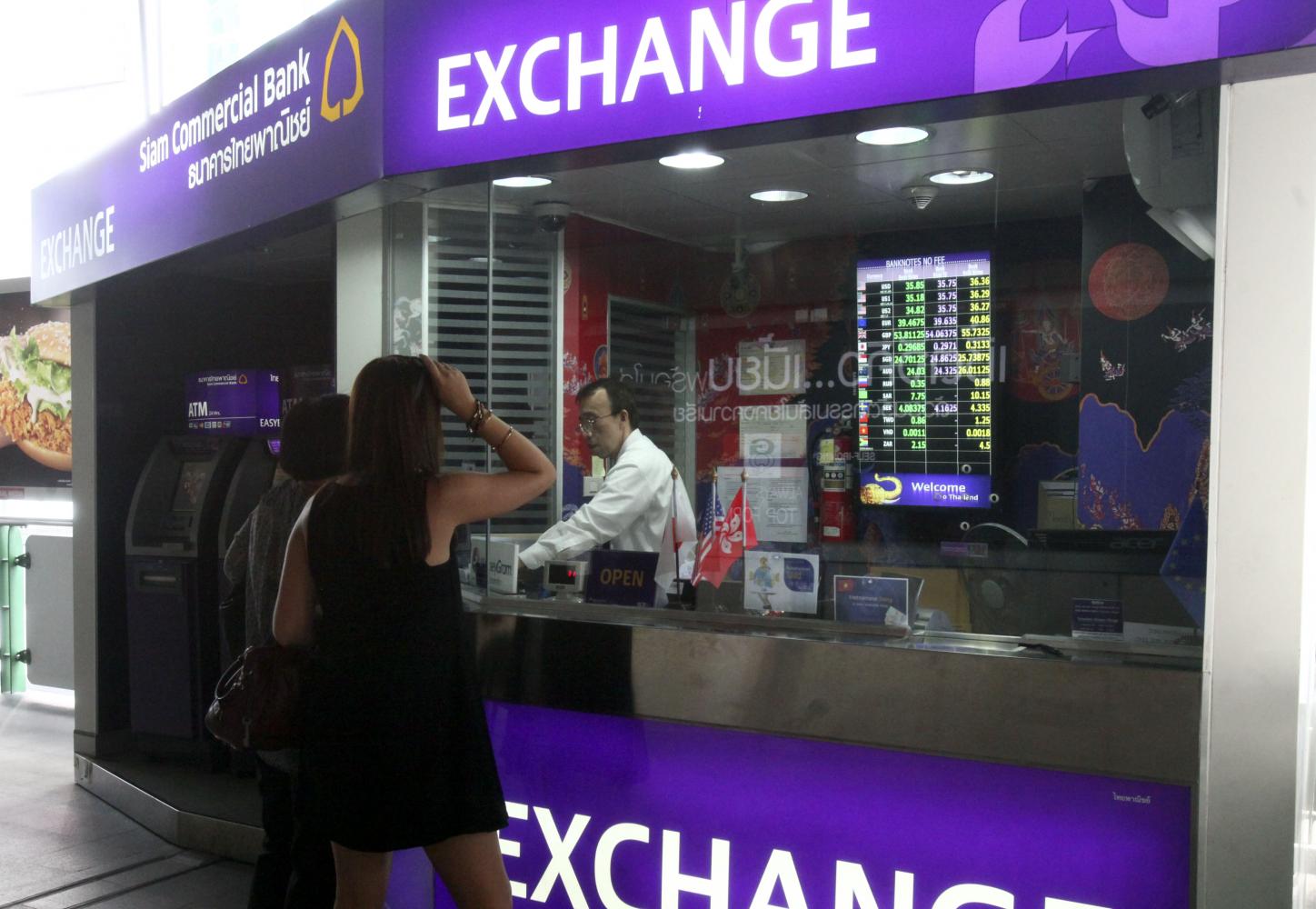 The central bank's latest measures are designed to create a balance for capital inflows and outflows in Thailand's capital market going forward as the US dollar is poised to depreciate further on the back of the US Federal Reserve's aggressive monetary stimulus, according to Kasikorn Research Center (K-Research).

The adjustment to the FCD criteria and the easing of investment limits in foreign securities by Thai investors are aimed at stimulating demand to purchase foreign currencies, creating flexibility for capital outflows, said K-Research.

This may help reduce the pressure of the baht's strengthening value, said the research house.

It could take time to assess the effectiveness of the central bank's measures, especially in terms of enhancing the flexibility for Thai investors to invest in foreign securities.

This is because portfolio investment diversification depends on the timing and stock market conditions in overseas territories, as well as investment knowledge of foreign securities among retail investors, said K-Research. 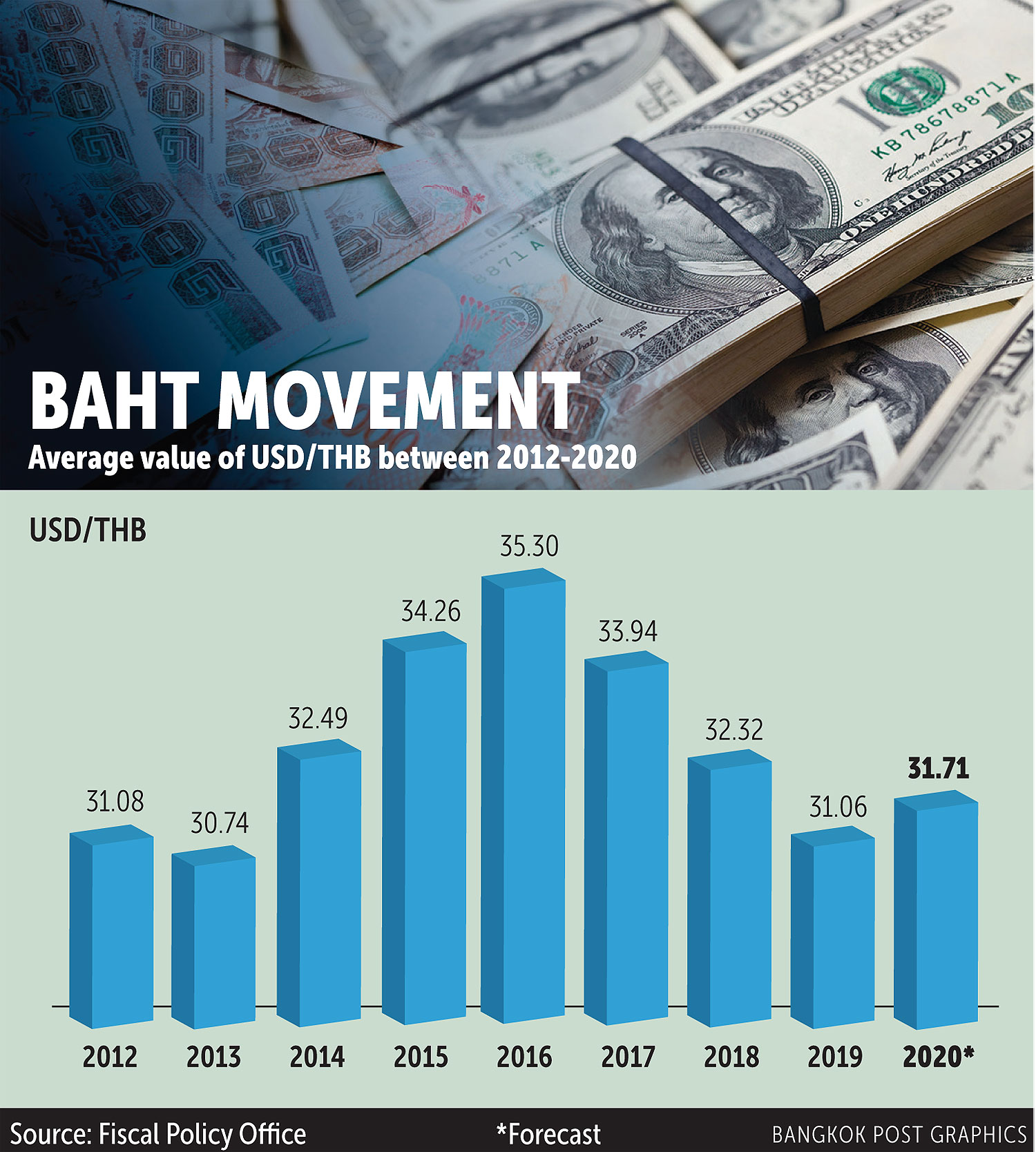 Although the bond pre-trade registration could help reduce short-term inflows parked in Thailand's capital market by foreign investors, this is not a move likely to impede fund inflows, according to the think tank.

The baht's value could rise further past 30 to the dollar due to Thailand's current account surplus and the US dollar having a depreciation tendency based on continued quantitative easing measures.

The local currency's value is forecast to appreciate to 29-29.25 baht to the dollar at year-end 2021, according to K-Research.

As Thailand is one of the markets with considerable foreign fund inflows, the move to require investors to pre-register before trading bonds in the domestic market could make non-resident investors wanting to speculate on the local currency via capital market instruments more cautious in their moves, said Tada Phutthitada, president of the Thai Bond Market Association (TBMA).

November recorded the largest foreign net inflows to the bond market so far this year.

Non-resident net inflows were registered at 31.4 billion baht on a month-to-date basis as of Nov 26, with net inflows into short-term and long-term debt securities tallied at 10 billion and 9.7 billion, respectively, according to TBMA data.

Foreign speculators who want to make a return on foreign exchange gains usually convert foreign currencies into the baht to purchase a form of securities, hold it for a short period, then sell it for a profit.

When the baht's value appreciates against foreign currencies, the profit gained after the currency conversion will be higher, with any yield gained from a securities investment adding to the windfall.

For this reason, bonds are one of the assets to be watched as the debt securities provide an opportunity for foreigners to engage in currency speculation, said Mr Tada.

Interest rates typically correlate with bond yields, and this trend can be foreseen without much ambiguity compared with stock investment, he said. 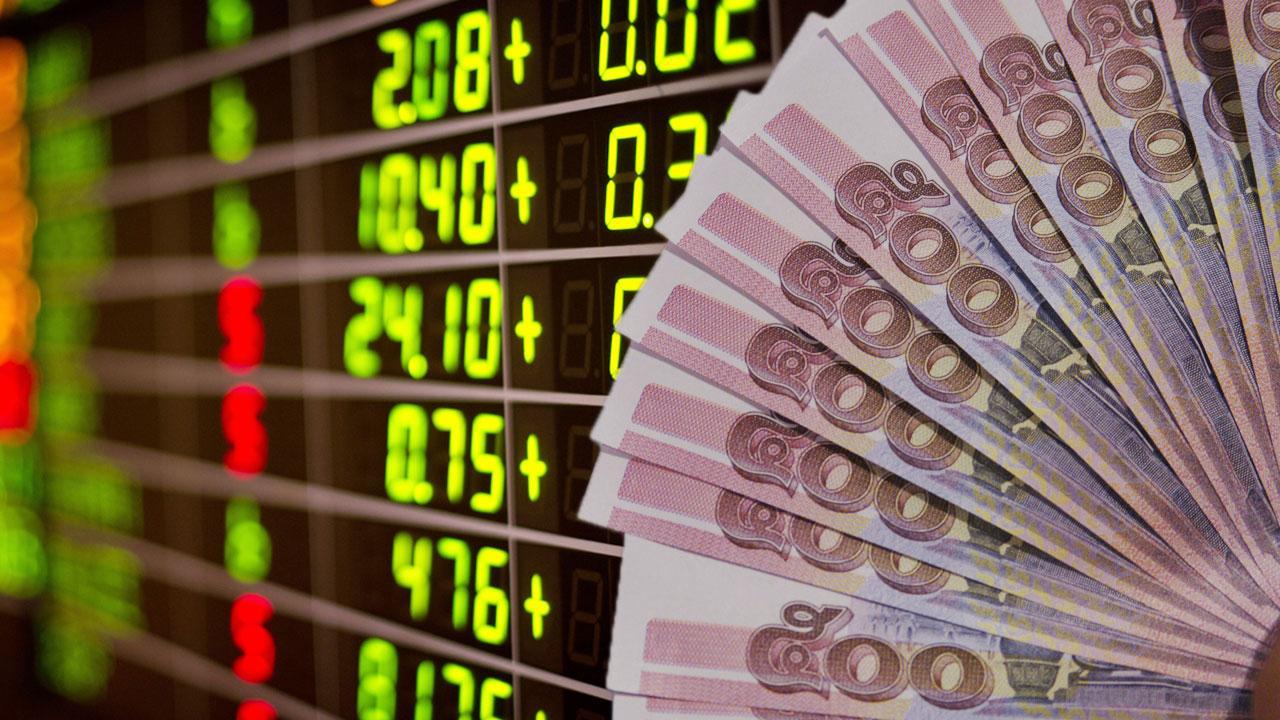 The central bank's measures are projected to have a minor effect in warding off an influx of offshore capital inflows, but "this is better than doing nothing", said Jitipol Puksamatanan, director of research and asset allocation at SCB Securities.

Thais who have a considerable volume of US dollars in their pockets are mainly exporters and large corporations, said Mr Jitipol. This group of people use the dollar for overseas transactions in goods and services. Ultimately, this group represents a tiny minority of the population, he said.

Striking a balance of capital inflows and outflows is also an impossible mission because these two movements of funds will never reach an equilibrium, said Mr Jitipol.

For instance, whenever the Thai stock market is on a bull run, local investors do not want to venture abroad to invest, thus discouraging funds from moving out of the country. On the other hand, funds usually move out of Thailand's capital market whenever domestic political instability flares up, he said.

"The central bank should tell the truth -- the foreign exchange market cannot be controlled by anyone and speculation is not illegal as long as it is free of fraud," said Mr Jitipol.

"The central bank should also clearly state if baht appreciation benefits the majority of Thais, then it is not necessary to try to diminish its value."

2021 will be a "critical" year as there are high expectations for economic recovery among Asia's economies, with clearer progress in terms of the development of Covid-19 vaccines shoring up confidence, he said. 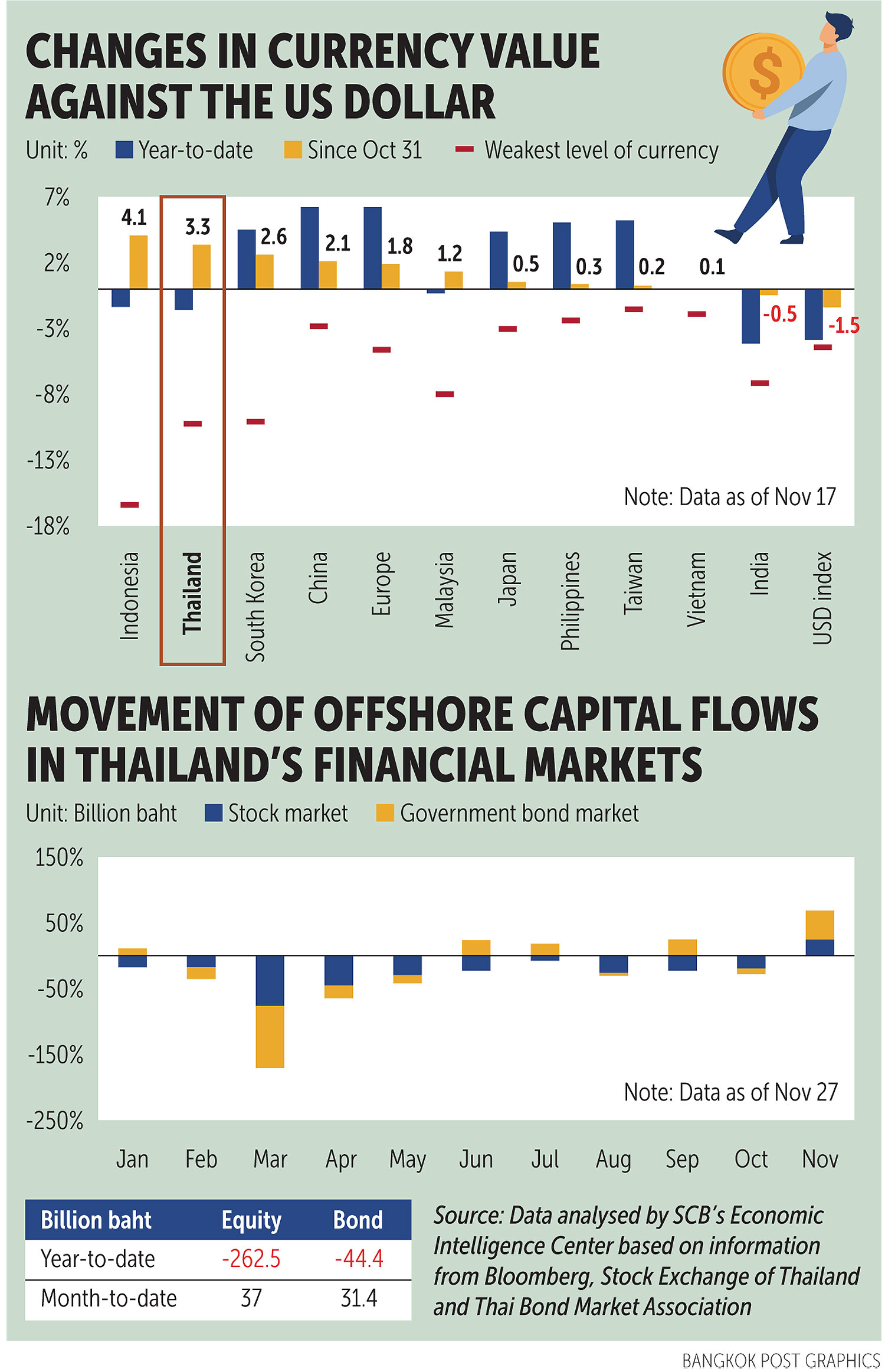 Keeping this scenario in mind, more foreign fund inflows are likely to move into Thailand's capital market next year.

Contributing to this outlook is the likelihood of exporters offloading their dollar holdings and converting them into local currency at the beginning of each year for working capital, Mr Jitipol said.

The Bank of Thailand should focus mainly on liquidity management rather than implementing additional measures to deal with the baht's appreciation, said Somprawin Manprasert, chief economist and head of Krungsri Research.

To support Thai exports, regulatory bodies should instead concentrate on increasing competitiveness and value-added goods, as well as examine new markets in preparation for a change in the economic landscape in the post-pandemic period, he said.

For instance, the Chinese yuan has strengthened in relation to the dollar, but China still registered double-digit year-on-year growth in exports in October as its products were in demand in global markets.

"A stronger baht will not cause much of an effect if we produce goods that global consumers demand," said Mr Somprawin. 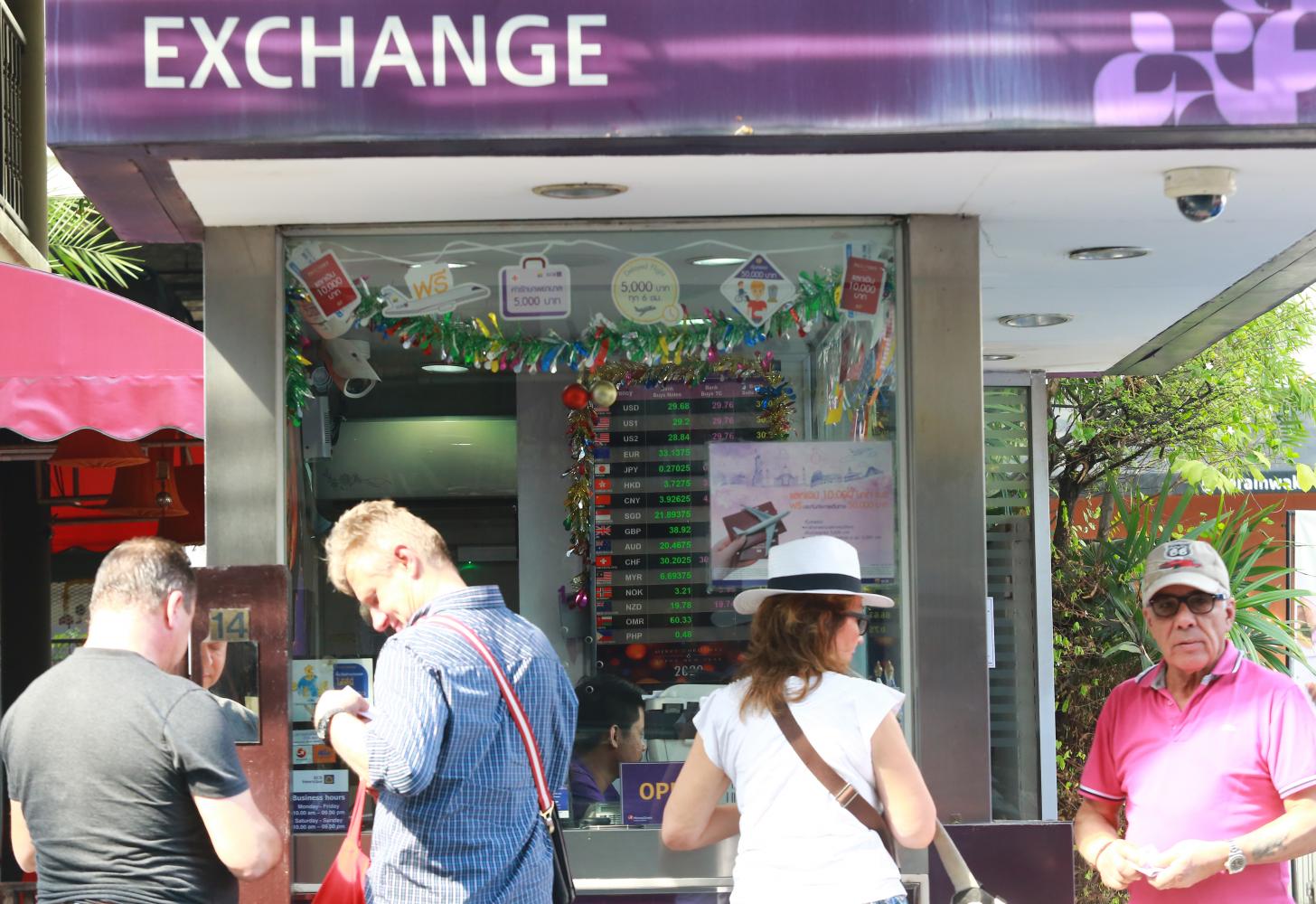 Tourists queue at a foreign exchange counter. K-Research forecasts the Baht to appreciate to 29-29.25 Baht per US dollar at year-end 2021. Somchai Poomlard

The prospects of the US Treasury naming Thailand as a currency manipulator still persist, although the imminent transition of the US administration may bring about a U-turn in policy.

Although Thailand was not included on the latest watch list of currency manipulators issued by the US Treasury in January, the country could be added to the watch list in the next report as it met all three criteria, according to a UBS Group report issued in July.

These comprise a trade surplus with the US of at least $20 billion, a 2% current account surplus of GDP, and one-sided intervention in the currency equivalent to 2% of GDP within six months of a year.

Although financial authorities understand how the baht appreciation will curb Thailand's trade competitiveness, "we are afraid the local currency's value could strengthen further to 29-29.5 next year driven by foreign capital inflows," said Ghanyapad Tantipipatpong, chairwoman of the Thai National Shippers' Council.

Ms Ghanyapad said exporters understand there are uncontrollable external factors behind the baht's strength as well as the government's limited abilities to manage the currency, with excessive intervention likely to prompt the US to add Thailand to its watch list of currency manipulators.

She said the government should instead focus on speeding up its efforts to eliminate existing trade obstacles, such as obsolete regulations on logistics and transport, in order to lower production cost for exporters.

The Federation of Thai Industries (FTI) is urging the central bank to come up with the right measures to help Thailand better compete with Vietnam through a more stable foreign exchange rate.

The Vietnamese dong does not appear to appreciate in relation to the greenback, so "we have to look at how Vietnam manages its currency that makes its export value higher than ours," said Kriangkrai Tiannukul, vice-chairman of the FTI.

In Mr Jitipol's view, as the US president-elect Joe Biden has nominated former Fed chair Janet Yellen as the next US Treasury secretary, there is a high probability the Biden administration will not focus on economic sanctions nor label countries with trade and current account surpluses with the US as currency manipulators.

The dollar's value is likely to weaken further as the new US administration is expected to implement an aggressive fiscal stimulus to rev up the economy, which has been battered by the pandemic, he said.

Mr Jitipol said if the Bank of Thailand were to continue intervening in the foreign exchange market by offloading the baht in an attempt to devalue the local currency amid prospects of a weaker dollar, it would have to use an excessive amount of funds.

Such interventions could also prove fruitless, while the central bank could register net losses in its operations given a further appreciation of the baht and weakness in the value of the dollar, he said.

Over the past five years, the central bank has continued to intervene in the foreign exchange rate, which resulted in an accumulation of foreign reserves valued at about $100 billion, according to Bank of Thailand governor Sethaput Suthiwartnarueput.

The central bank swung back to a net profit of 365 billion baht for the first three months of 2020, largely because the baht retreated against the greenback.