From his headquarters on the appropriately named Hi-Tech Industrial Estate north of Bangkok, U.S. electronics company executive Ronald Rocha marvels at the success of his firm’s investment in Thailand.

Back in 2002, New York-listed Benchmark Electronics Inc. paid $45 million for the Thailand and U.K. operations of an American competitor. It turned out to be a bargain buy. Today, Benchmark’s Thailand unit accounts for one-fifth of the company’s $2.3 billion global revenues after morphing into a manufacturer of such sophisticated, high value-added products as surgical lasers, defibrillators and optical sensing technology for electric vehicles.

“The Thai acquisition was an excellent decision,” says Mr Rocha, Benchmark’s Asia Vice President for Electrical Manufacturing Systems. “In the past, companies would go to countries like Thailand just to reduce cost. We are here because of capability, technology and quality as well as the low-cost advantage. The government is industry friendly, there is a high emphasis on education and the workforce is very stable. Growth for us has been nonstop – 40 percent in the past five years.”

The story of Benchmark’s Thai investment epitomises the transformation taking place in Southeast Asia’s second largest economy. Described by the World Bank as “one of the great development success stories” that has used smart economic policies to become an upper middle-income country, Thailand is now striving for further prosperity by embracing an innovation-driven strategy known as Thailand 4.0.

This ambitious vision involves creating a regional hub for futuristic industries, including medical devices, electric vehicles, robotics and automation. At its heart is the technological transformation of one of Thailand’s long-established core industries, electrical and electronics, into what is today termed “Smart E&E.”

Originally established 50 years ago to manufacture basic consumer products as a substitute for foreign imports, Thailand’s E&E sector has burgeoned into a global powerhouse. It is the world’s second largest exporter of computer hard disc drives, air conditioners and washing machines, ranks sixth in compressors and 8th in refrigerators, according to GSB Research, a unit of Thailand’s largest state-owned bank.

Spearheaded by global giants such as Daikin, Mitsubishi, Sony and Toshiba of Japan, LG and Samsung of Korea, Bosch and Siemens of Germany, Seagate and Western Digital of the U.S., and Delta Electronics of Taiwan, Thailand boasts an E&E supply chain of more than 2500 companies, according to the EEI. They include local champions such as chip designer Silicon Craft and ThaiGerTec, a Thai-German joint venture that designs and develops microelectronics, powerelectronics and embedded systems for the automotive industry.

In total, Thailand’s E&E industry accounts for 10.4 percent of the Kingdom’s gross domestic product, according to GSB Research, and for 24 percent of exports, according to Thailand’s Ministry of Commerce. With 800,000 employees ranging from researchers with doctoral degrees to vocationally trained technicians and experienced assembly line workers, it is the country’s largest manufacturing employer. “E&E is fundamental to Thailand 4.0”, says EEI president Narat Rujirat.

Even the COVID-19 pandemic and the US-China trade war have failed to stop Thailand’s resilient E&E sector. On the contrary, Thailand is seen by many investors as a haven from both the coronavirus and trade spats. In the first nine months of 2020, the number of foreign and domestic companies that applied to invest in Thailand’s E&E sector actually rose to 106 projects, from 94 projects in the same period in 2019, making it by far the most popular sector, totalling over $1.2 billion in applications submitted to Thailand Board of Investment (BOI).

Thailand’s attraction for E&E investors stems from its formidable array of advantages. In addition to the strong supply chain and skilled human resources highlighted above, Thailand’s geographical location at the crossroads of a region of 3.4 billion inhabitants – half the world’s population – has enabled it to become one of the world’s top exporters.

Investors also benefit from privileges offered by the BOI. E&E companies focused on innovation and research and development can receive tax breaks of up to 8 years and other incentives such as renewable smart visas of up to four years for international talent and investors in key sectors such as smart electronics, as well as their families. The BOI also supports companies by helping establish industrial linkage, sourcing of local suppliers and business matching.

One example of how BOI privileges can benefit both investors and the Thai economy is the way companies reinvest the tax breaks they receive. “We use them to buy machinery for our factories,” Benchmark Vice President Mr Rocha says. “That creates jobs and allows for more business. It is a win-win.”

Delta Electronics Inc., a Taiwan-based multinational that is one of the world’s leading manufacturers of power supplies and electronics fans that are essential to cool computers, smart phones, home appliances and, increasingly, medical devices and electric vehicles, has long been enamoured with the Kingdom.

It first opened a factory in Bangkok in 1988 and in 1995 listed its local subsidiary on the Stock Exchange of Thailand. Today, Delta Electronics (Thailand) employs 12,000 people and accounts for $1.6 billion, or about 18 percent, of the group’s $9 billion global revenues. 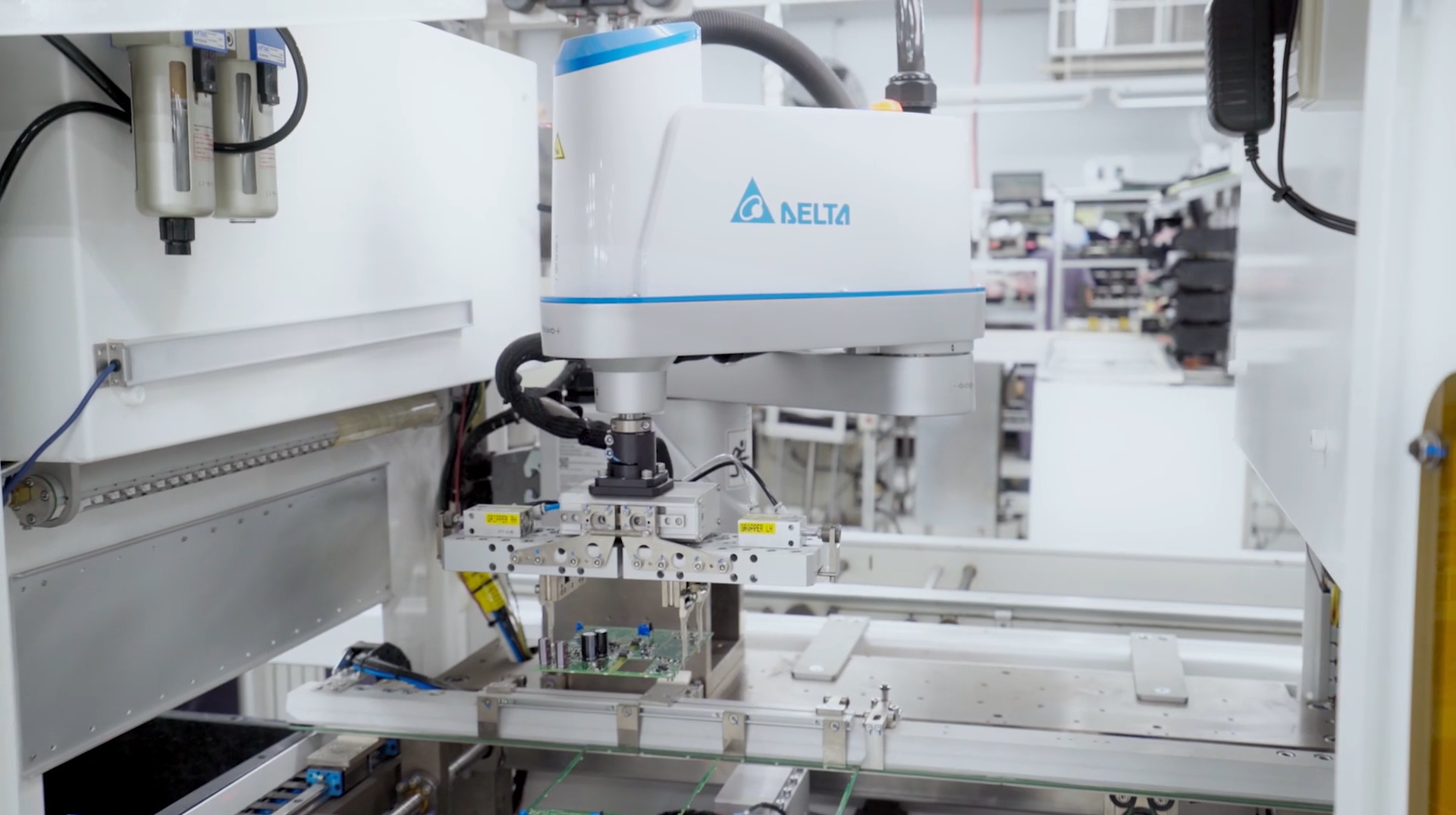 Delta Electronics’ versatile high-precision Selective Compliance Assembly Robot Arm (SCARA) is seen in one of the state-of-the-art manufacturing facilities the company has setup in Thailand, attracted by the country’s geographical advantage at the heart of ASEAN, a strong supply chain, skilled human resources, and friendly investment policies.

Bangkok is the regional headquarters for all Delta’s operations in Southeast Asia, India and Australasia and the Thailand business oversees research and development hubs in Bangkok, India, the U.S. and Germany. Next year it plans to expand further by opening a third factory in Thailand.

“As an investor we really wanted to find a country that can give you confidence for the long term and that is why we chose Thailand,” says Delta Thailand President Jackie Chang. “It is also very good for logistics, such as air and sea freight, and the people can adapt easily to different cultures.”

Although Delta has now been in Thailand for 32 years, Mr Chang says the company remains well looked after by the BOI. When COVID-19 threatened global supply chains, the BOI organised a meeting with 50 suppliers to ensure Delta’s plans for expansion into electronic vehicle components wasn’t affected. “It’s not only tax incentives, but active support for the private sector to make sure we are well settled in Thailand,” Mr Chang says. “Even though we have been there for so long, the BOI still gives us an open and free communication channel.”

Both Mr Chang and Benchmark’s Mr Rocha separately identify the staying power of the workforce as a major plus for investing in Thailand. Mr Chang estimates that 50 percent of Delta Thailand’s employees have worked for the company for 20 years and almost 10 percent for 30 years. “That’s very amazing – like a family,” says Mr Chang.

Mr Rocha says the turnover rate of Benchmark’s 3,500 employees at its two Thai factories is just 1 percent a month and half that for managers. That is in marked contrast to some countries in other parts of the world, where employee turnover can be so high that a factory’s entire workforce might change in the space of a year, Mr Rocha says.

Similarly, Benchmark and Delta are impressed with the partnerships they have developed with local academic institutions. Delta has teamed up with Burapha University in the Eastern Economic Corridor, the high-tech hub of Thailand 4.0. Benchmark, meanwhile, says that at any one time it employs 10 interns from universities in Nakhon Ratchasima, 220 kilometres northeast of Bangkok, where one of its factories is located.

Both companies are upbeat about the prospects for Thailand’s E&E sector. “We have a lot to look forward to,” says Mr Rocha. “Next year and 2022 are going to be pretty big for us. We are increasing our investment and the BOI is going to be a big part of what we do here.”