While the government has fiscal measures, the reality of a prolonged slump is setting in, write Post Reporters

A woman walks past a Christmas tree in Siam Square. With Covid-19 infections on the rise, consumer spending across the country is expected to decline during the New Year period.  Chanat Katanyu

A fresh round of Covid-19 infections in Samut Sakhon province, home to many migrant workers in the fishery industry, sent shivers down the spine of many locals and businesses, fearing another possible nationwide lockdown could wreak havoc on the fragile economy.

The outbreak's epicentre was the Central Shrimp Market -- now sealed -- where 44% of 2,025 people tested were infected.

The market's labour force is dominated by workers from Myanmar, but also employs other migrants, including Laotians.

Coronavirus infections linked to the outbreak in Samut Sakhon have now reached more than 20 provinces nationwide.

As a precaution to safeguard against the deadly virus, public New Year celebrations and crowded events have been prohibited in Bangkok and many provinces.

No national lockdown is planned, but Covid-19 control zoning is being imposed based on the number and degree of new cases. 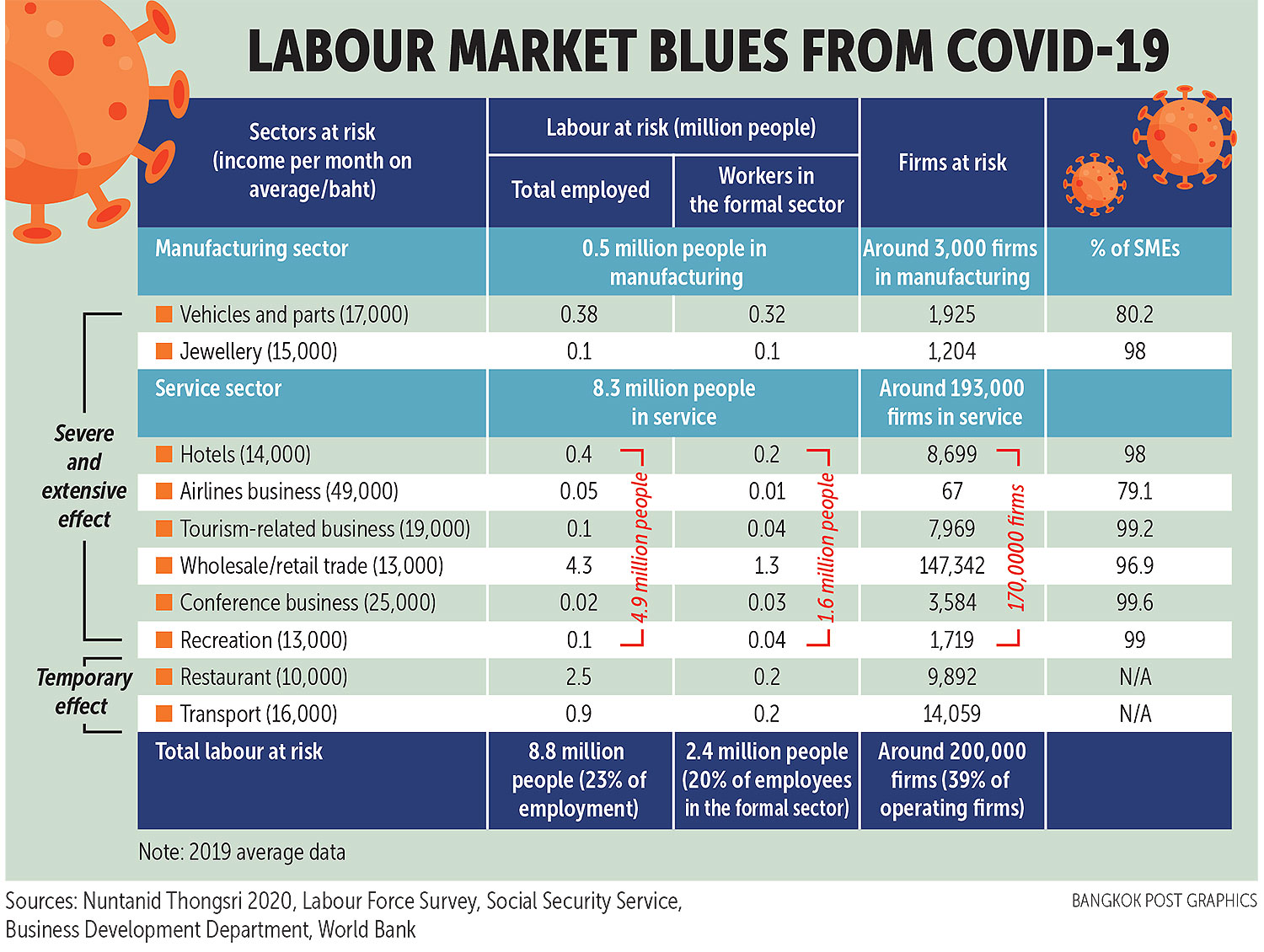 Under a scenario where there is no cluster of infections in other provinces that lead to a nationwide lockdown, the economy and manufacturing sector are estimated to incur combined losses worth 45 billion baht, according to Kasikorn Research Center.

Of the 45 billion baht in losses, 13 billion are losses related to fishery products because of a decline in seafood consumption due to lower confidence, said the think tank.

Another 15 billion baht in foregone revenue is associated with muted consumer spending during the New Year period, while the remaining 17 billion is losses incurred from delayed domestic travel plans, accounting for 30% of tourism revenue in a month's time.

But it is too soon to assess the extent of the effect of the new outbreak on Thailand's economy, as an evaluation of the scale of the outbreak and restriction measures has to be made, said Kulaya Tantitemit, acting director-general of the Fiscal Policy Office.

The Finance Ministry is prepared to handle volatile economic conditions through fiscal ammunition: the 1-trillion-baht emergency loan decree, with a leftover amount tallied at around 680 billion, said Ms Kulaya.

The 680 billion baht can be used until September 2021, as stipulated by the loan decree.

For the fiscal 2021 budget, the government has an expenditure budget of 3.28 trillion baht, with a budget deficit of 623 billion.

The government still has room to seek loans worth around 100 billion baht, she said, though additional loans would depend on the necessity of the situation.

According to the public debt law, the government is allowed to borrow to compensate for an annual budget deficit of no more than 20% of total fiscal expenditure for each fiscal year, plus up to 80% of the principal balance of payment.

For the fiscal 2021 budget, the government set a budget for the repayment of loan principal at 3% of the annual expenditure budget.

Although there has been progress in Covid-19 vaccine development, vaccine distribution is expected to be limited, said Titanun Mallikamas, assistant governor of the central bank's monetary policy group.

The central bank predicts vaccination coverage in advanced economies to be at 30% of the population in the second quarter of 2021, with the coverage ratio in key countries for Thai tourism at 30% by the third quarter.

Under this scenario, Thailand is expected to re-open to foreign travellers from the second half of 2021, with arrivals gaining in the final quarter, said Mr Titanun.

Two scenarios are envisioned for re-opening to foreign tourists depending on vaccine development.

A 14-day quarantine period for foreigners with a special tourist visa is the first scenario, while the other forgoes a quarantine for mandatory vaccination and infection test certificates, he said.

With uncertainties looming over Covid-19 outbreaks at home and abroad, the Bank of Thailand lowered its GDP growth outlook for 2021 to 3.2% from 3.6% as the impact of a prolonged outbreak is likely to delay a recovery in tourism, said Mr Titanun.

The central bank forecasts foreign tourist arrivals in 2021 to tally 5.5 million, a decline from an earlier projection of 9 million. 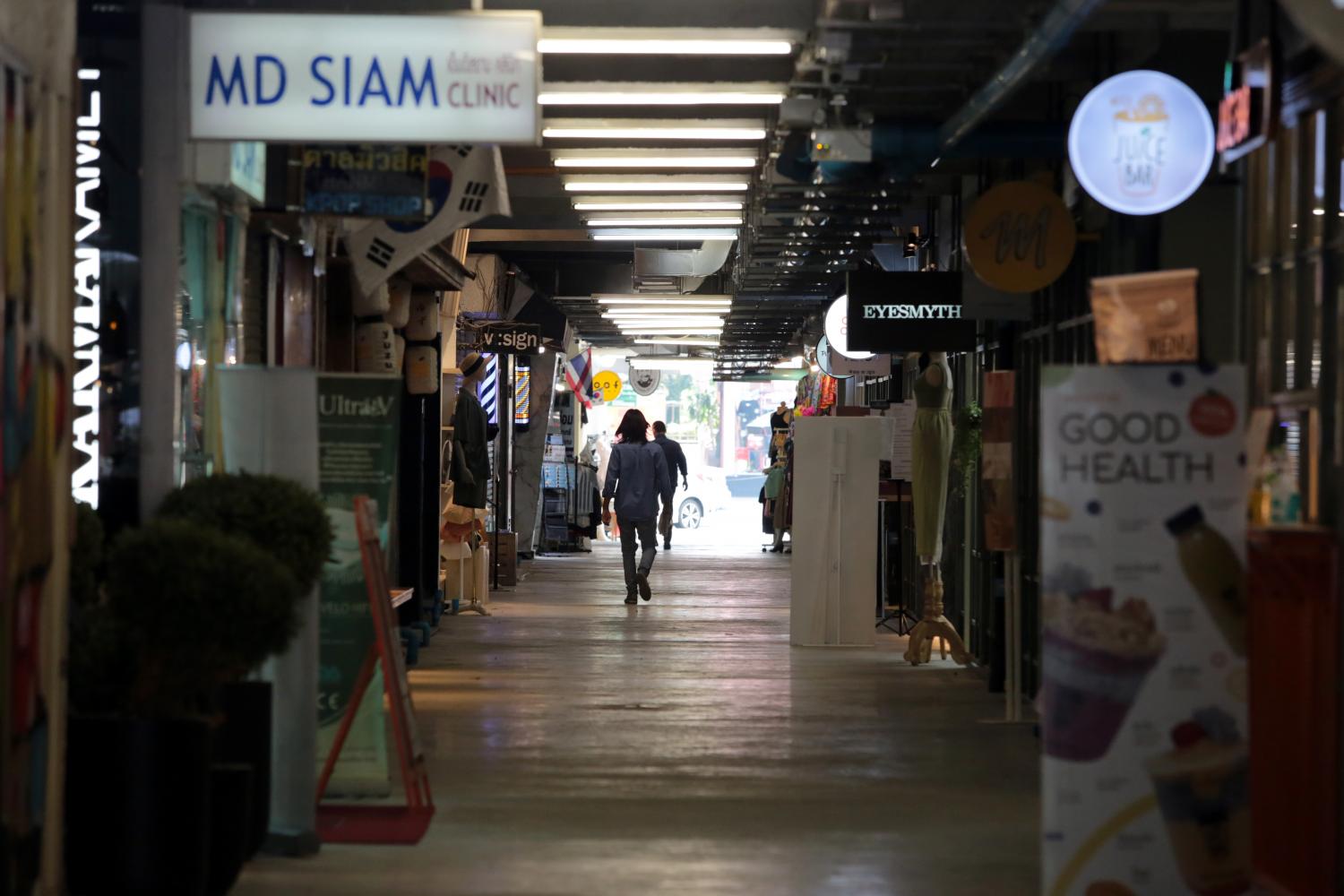 The atmosphere at Siam Square after the recent outbreak. The Thai economy could experience a double-dip recession in the first quarter depending on virus control measures. Chanat Katanyu

The new surge of infections in Samut Sakhon will slow the process of attracting more international tourists as foreigners delay their travel plans, said Vichit Prakobgosol, president of the Association of Thai Travel Agents.

With a prolonged tourism drought, Mr Vichit suggested the government provide support to cushion the adverse impact, such as setting up a co-payment scheme that helps subsidise 50% of salaries, capped at 7,500 baht per employee.

Marisa Sukosol Nunbhakdi, president of the Thai Hotels Association (THA), said the association has submitted a proposal to the government through the Thai Chamber of Commerce for a co-payment scheme where both the government and private sector pay 50% of wages, targeting 200,000 employees in the tourism sector for one year.

Mrs Marisa said Germany is a leading example as it introduced a state subsidy scheme to support employees during the pandemic.

The scheme, known as kurzarbeit in German, stretches to March 2021 as the pandemic continues to take a toll during the winter season.

Under this programme, the federal government helps cover 60%-80% of net wages in exchange for fewer working days at the height of lockdown.

Many countries have followed Germany's lead including Britain, which is facing a second-wave outbreak that prompted the British government to extend this furlough scheme until the end of April 2021.

"This method will enliven feeble businesses during the crisis, while the workforce directly receives benefits from the package, getting paid via e-wallet endorsed by the government bank," she said.

Under the THA's proposal, the state subsidy should include only legal hotels enrolled in the social security system. Those participating in this scheme must resume their services as usual.

Each operator can receive a subsidy for up to 30% of their total workforce wages to disburse the budget to more players in the industry.

Udom Srimahachota, vice-president of the THA's western chapter, said the time frame for the co-payment programme should cover six months to one year because foreign arrivals are not expected to return en masse until late October 2021.

"Most operators are unlikely to survive until a new flow of foreign tourists visit Thailand without more support from the government to retain employment," he said.

Apart from financial programmes designed to help tourism employees, financial measures such as soft loans to help operators stay afloat should be allocated as soon as possible, Mr Udom said.

Thanapol Cheewarattanaporn, president of the Association of Domestic Travel, said if the government imposes a partial lockdown in some provinces, tourists can avoid those places and travel to other destinations instead.

However, tourism confidence may plunge further as people decide to cancel their trips because of health concerns stemming from a higher number of infections.

He said operators should follow developments closely as people may change their decisions on a daily basis before the New Year, looking for advice from the Centre for Covid-19 Situation Administration, which could promptly announce a tighter lockdown at any time.

"The tourism stimulus package for the elderly, set to start early next year, has to be postponed until the virus situation and tourism sentiment among local tourists improves," Mr Thanapol said.

"The country's public health is the priority." 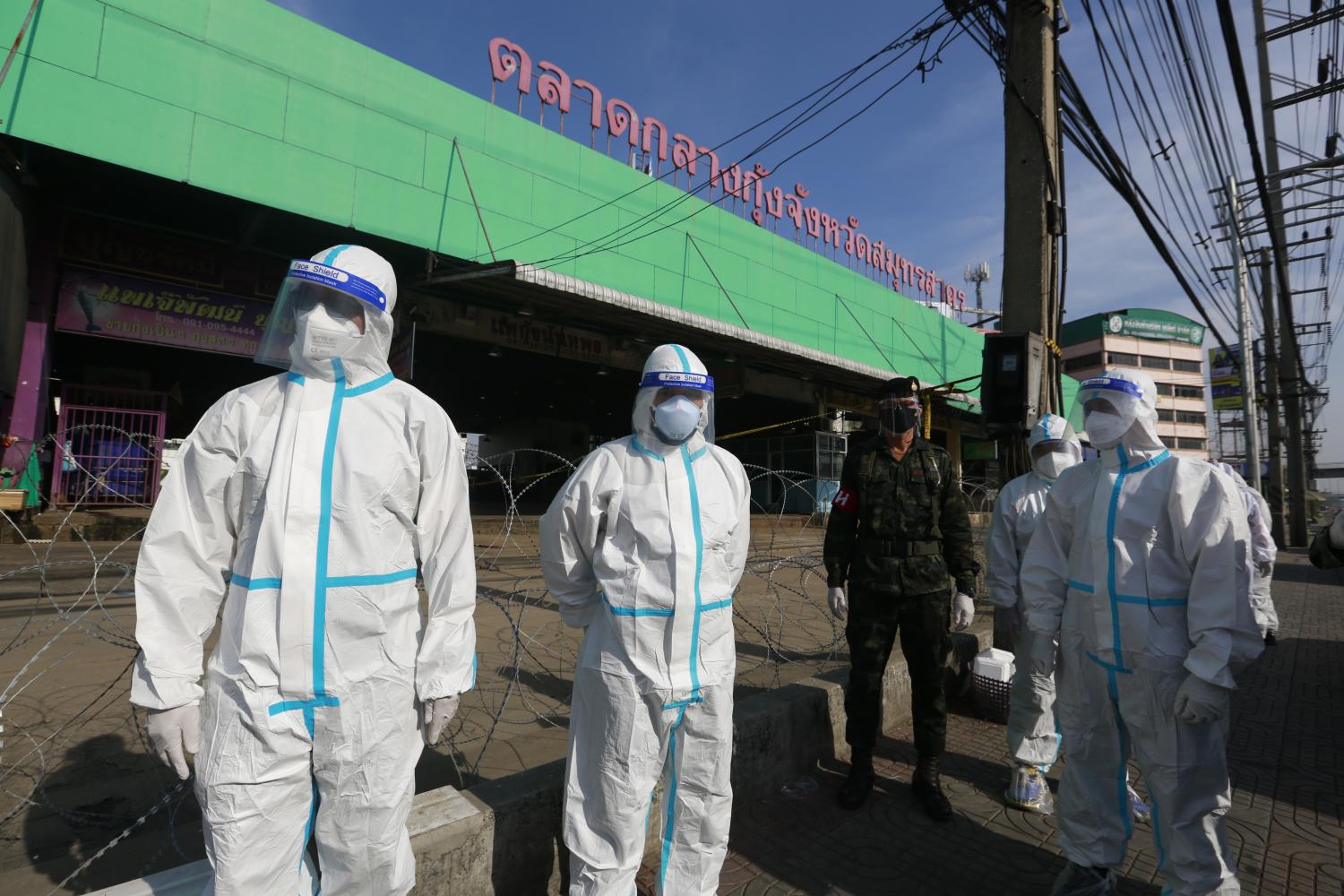 Coronavirus infections linked to an outbreak in Samut Sakhon have now reached to more than 20 provinces nationwide. Arnun Chonmahatrakool

The Federation of Thai Industries (FTI) is bracing for uncertainties next year, fearing another lockdown may impede economic recovery.

It remains unknown whether the government will order a nationwide lockdown to contain the virus, said Surapong Paisitpatanapong, vice-chairman and spokesman for the FTI's automotive club.

Such a lockdown would lead to temporary factory shutdowns and more unemployment, he said.

Many companies, especially car manufacturers, are continuing with their operations as they have not made any changes in response to the ongoing outbreak in December.

The earliest car makers would adjust their investment and production outlook to brace for the worst-case scenario -- a possible nationwide lockdown -- would be early 2021, Mr Surapong said.

Car and auto parts businesses, which employ 750,000 workers, survived the first lockdown in April, but if the second outbreak escalates and leads to drastic measures to stem the virus spread, these companies may consider reducing their employment, he said.

Many companies had to shut down their plants temporarily during the lockdown earlier this year.

Even without a complete lockdown, the impact on the economy has already been felt as many people are afraid of travelling or visiting shopping malls, said Mr Surapong.

This is a sign of another recession, with people restricting their spending and avoiding unnecessary expenses, including purchases of cars, he said.

Aside from auto manufacturers, the main threat of a new outbreak is to small and medium-sized enterprises (SMEs), which have been battered by the impact of the pandemic on the economy, said Mr Surapong.

"SMEs will face a liquidity shortage and may die down this time [with a prolonged outbreak]," he said.

Amonthep Chawla, head of research at CIMB Thai Bank, said the economy could experience a double-dip recession in next year's first quarter, depending on virus control measures and the scale of the outbreak.

Consumer spending could contract significantly in the first quarter depending on the scale of measures to curb gatherings and activities, while private investment is expected to continue declining due to lower sales and high inventories that will cause enterprises to reduce production capacity, said Mr Amonthep.

GDP growth may expand less than 3% in 2021 given a double-dip recession, he said.

"It's unfortunate that new infections were reported in the fourth quarter, which is the peak sales season for the retail business. However, the impact is expected to be less pronounced than the first outbreak." 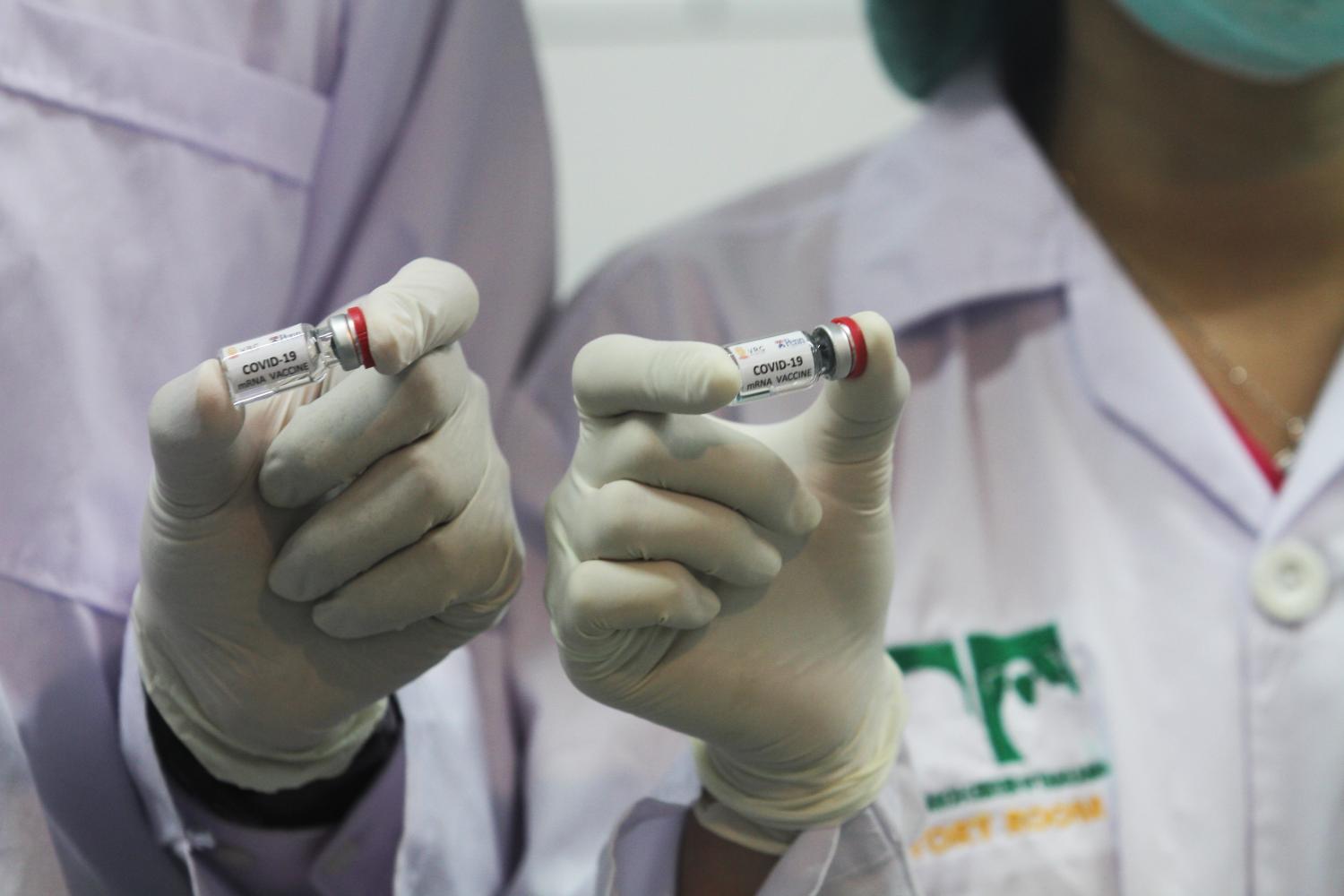 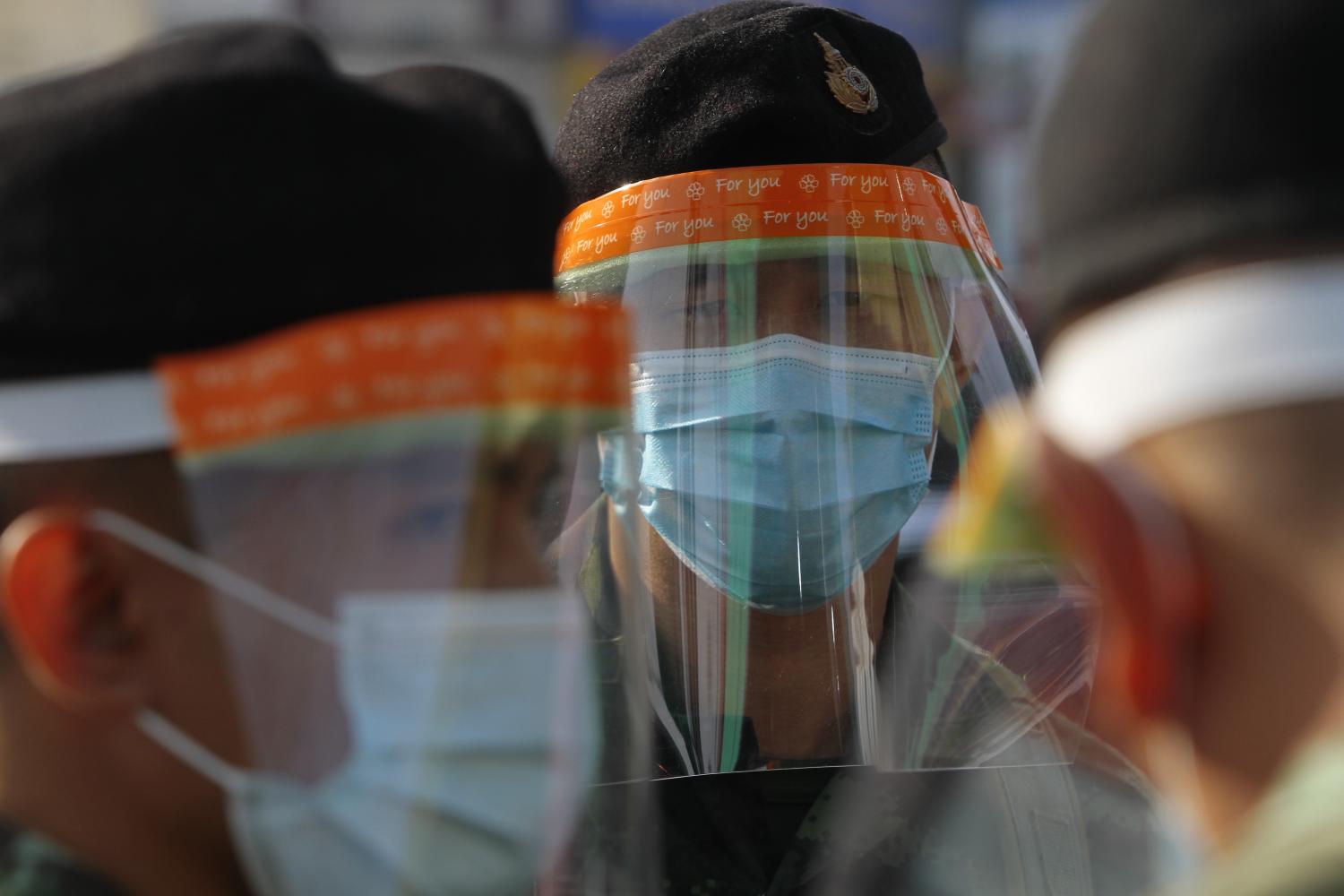 Coronavirus infections linked to an outbreak in Samut Sakhon have now reached to more than 20 provinces nationwide. Arnun Chonmahatrakool