Mexico is home to the world's most powerful drug cartels, who have terrorized the country for years. But the country is poised to try something different in tackling the gangs by legalizing at least one of their products: marijuana. 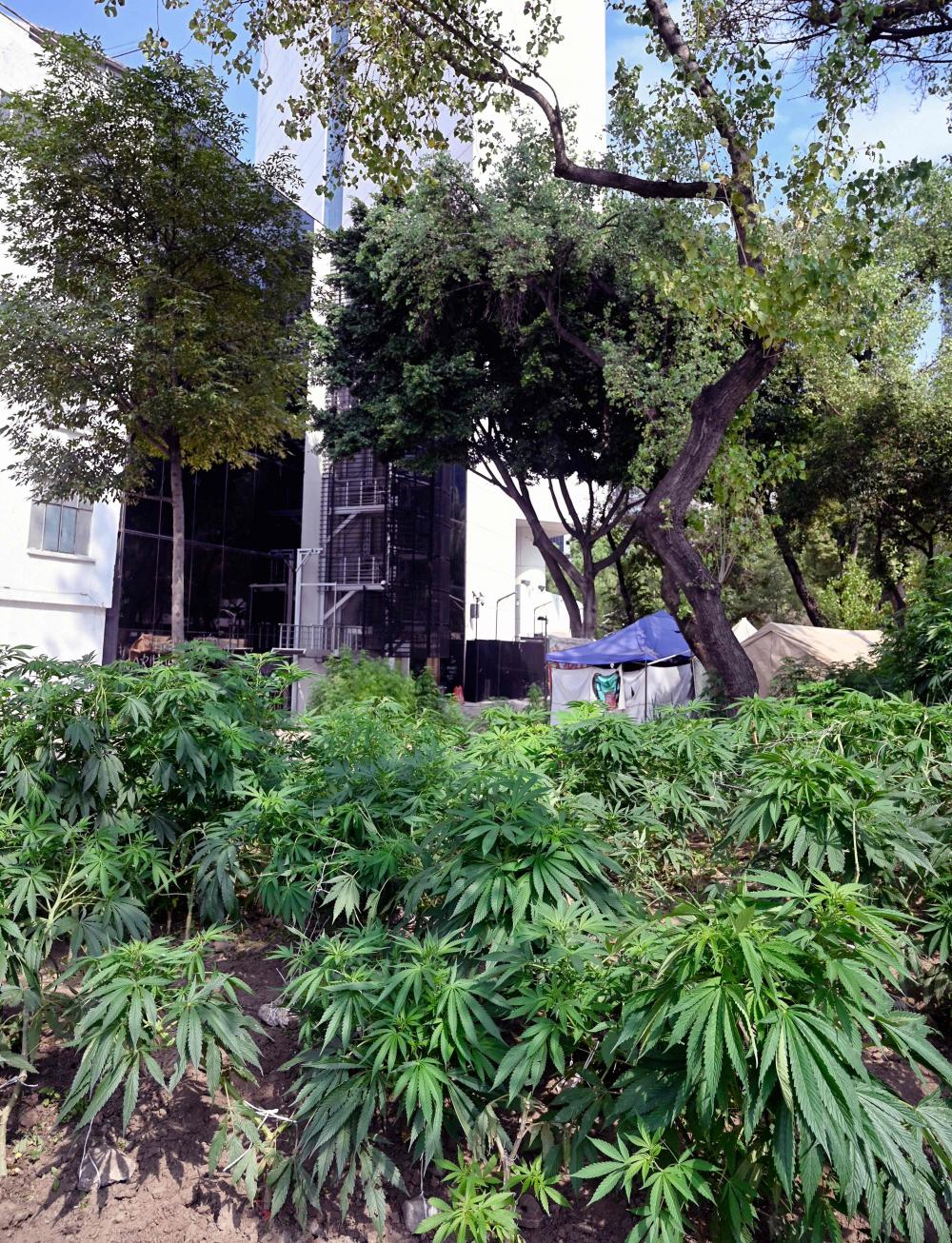 View of a cannabis plantation outside the Senate's building in Mexico City on September 30. AFP

Mexico is set to become the world's largest legal cannabis market as its Congress wraps up legislation in the coming weeks to legalize pot throughout the supply chain, from farming to distribution and consumption.

Mexico's Senate passed a bill in late November legalizing recreational marijuana. Lawmakers in the lower house say they will approve a bill by February, though they want to raise the amount of pot consumers may possess in public beyond the Senate bill's limit of 28 grams, or about an ounce.

Currently in Mexico, one can possess up to five grams of marijuana without being arrested. The use of marijuana for medicinal purposes has been legal since 2017.

"We are committed to regulating cannabis. It's a right of Mexicans," said Ignacio Mier, the majority leader in Mexico's lower house and a member of President Andrés Manuel López Obrador's Morena party, in an interview.

Mexico's supreme court ruled in 2018 that marijuana prohibition was unconstitutional.

The court acted after several legalization advocates brought court cases. One group even took over a small park in front of Mexico's Senate and planted about 800 cannabis plants to pressure lawmakers. Activists regularly harvest the plants and smoke the buds.

Mr. Mier said lawmakers and senators will work together in January to agree on a common bill to put up for a vote in both houses.

The legal changes will turn Mexico into the third country in the world to legalize cannabis nationally for recreational use after Uruguay and Canada, and the largest with a potential consumer market of 88 million adults.

Mexico's legalization will more than double the number of people globally who have access to legal marijuana, creating momentum for legalization efforts world-wide, said Maritza Perez, director of the Office of National Affairs at the Drug Policy Alliance, a U.S.-based advocacy group for legalization.

Because Canada and Mexico will now have legal cannabis, it will also likely lead to pressure on the U.S. to follow suit, she said.

Authorities expect that Mexico's legalization for recreational use will increase competition, bring prices down and reduce the black market for drug gangs.

Some 200 organized crime groups operate in Mexico, where around 270,000 people have been killed since 2006, mostly in cartel-related violence, according to government estimates.

Many analysts, however, say legalization will have only a marginal impact on drug gangs.

Nowadays, cannabis makes up only a small percentage of the gangs' profits, whose main sources of income are cocaine, synthetic drugs such as fentanyl and gasoline theft.

Cartels have also diversified into widespread extortion of small businesses across Mexico.

Marijuana seizures at the U.S.-Mexico border have plummeted about 83% since fiscal year 2015, an indication that cannabis is a declining business for the Mexican cartels in part because of the increasing legal market north of the border.

"Whoever thinks that this law will be a magic bullet that will reduce crime and homicides is being too optimistic," said Alejandro Hope, a security analyst and former intelligence official.

Mr. Hope and others say Mexico's only realistic chance at confronting cartels is through capable law enforcement institutions, which the country has failed to build.

Mexico's army has been mostly deployed since 2006 in taking on the increasingly powerful cartels. In that time, the homicide rate climbed as rival gangs fought each other and security forces.

Mexico's move toward legalizing pot is part of a broader movement by countries to try new approaches to tackle abuse of harmful drugs by users and going after the networks that supply them.

For the past few decades, those policies have focused almost exclusively on a law-and-order approach, jailing drug users and trying to disrupt the global supply chains of illicit drugs.

Portugal, Switzerland, the Czech Republic, the Netherlands, Argentina, Costa Rica and Mexico have implemented some form of decriminalization as it relates to possessing small amounts of drugs for personal use.

That has led to a decrease in the transmission of HIV and other infectious diseases and reduced overdose deaths, said Ms. Perez of the Drug Policy Alliance.

Under the Senate bill, consumers could possess up to 28 grams of marijuana in public and grow up to eight plants per household. The possession of more than 28 grams would be subject to fines, and from 200 grams on it would be a crime punished with jail time.

Companies and individuals would be able to produce, distribute, sell, export and import cannabis under strict guidelines and permits set up by a newly created regulator, a process expected to be long and costly.

"The Senate's bill envisions an over-regulated market that will inevitably raise costs for legal players, making it hard for them to compete with the illegal market," said Juan Francisco Torres Landa, a lawyer with Hogan Lovells who fought for years to legalize pot in Mexico. "This excessive regulation will also make the whole process vulnerable to government corruption."

That is why lawmakers at the lower house want to raise the amount of cannabis consumers can possess to 200 grams, and make it easier and quicker to obtain the permits to produce and sell cannabis, Mr. Mier said.

They are also against the creation of a new regulator, and instead want the health ministry to award the permits.

Meanwhile, the two dozen cannabis activists who occupy the park in front of Mexico's Senate say they won't go away. Their improvised camp includes several sleeping tents, a kitchen and a bathroom connected to the city's sewage. A small cannabis museum made of thick planks is under construction.

The activists are negotiating with local authorities to turn the park into a permanent cultural center consecrated to marijuana, said Pepe Rivera, one of the activists.

"We don't accept limits to our right to harvest and consume freely," Mr. Rivera said recently while walking through bushes of marijuana. "If you don't need a license to drink as much alcohol as you like, why should we accept any limit to our right to smoke marijuana?"