Mr Buddhipongse, centre, at the official launch for NT on Thursday. The ceremony was held at NT's headquarters, previously CAT's headquarters on Chaeng Watthana Road. (Photo by Varuth Hirunyatheb)

National Telecom (NT), the new merged entity of state enterprises CAT Telecom and TOT, aims to become one of the top three mobile service providers in Thailand by the end of this year.

The target was spelled out by Buddhipongse Punnakanta, the digital economy and society (DES) minister, who presided over the official launch of NT on Thursday.

NT is also in talks with two top mobile operators -- Advanced Info Service (AIS) and True Move H Universal Communication (TUC) -- for agreements on infrastructure-sharing on its 700-megahertz spectrum network as well as roaming agreements to make use of the 2600MHz range occupied by the two major operators.

The agreements would target bolstering NT's service quality and back-office efficiency as part of the plan to become a top three mobile operator by year-end. 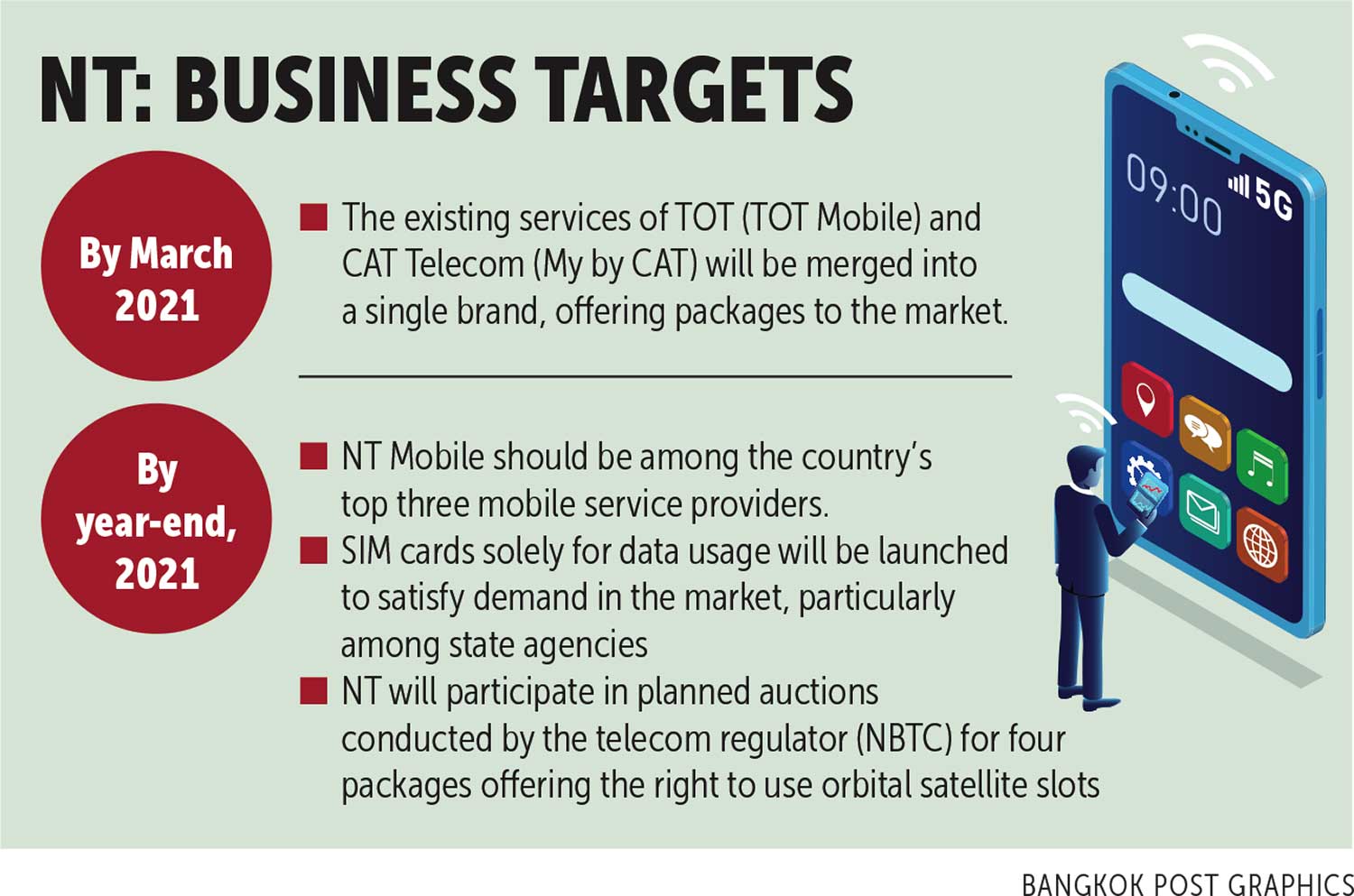 While the merger was made official on Thursday, a full consolidation of the two organisations is expected to last 18 months.

Five NT board members have been named, including Gp Capt Somsak Khaosuwan, a former TOT board chairman, who serves as chief executive of NT, and ML Chayotid Kridakon, director of PTT's board, who was made the NT board chairman.

Mr Buddhipongse said NT would be an alternative telecom and digital service operator for the public offering service quality and a full range of infrastructure.

"NT needs to attain synergy between TOT and CAT in terms of resources, operations and organisational culture," said Mr Buddhipongse.

Both need to respect each other to ensure better efficiency from smooth operation and management."

By March, NT Mobile wants to be marketed as a sole brand and have packages rolled out, unifying their services that month, he said.

A source on the NT board who requested anonymity said NT is in talks with AIS and TUC regarding business partnerships.

AIS and TUC are expected to save more costs using this method than network investment.

The second concerns roaming agreements CAT could capitalise off of via the bandwidth held by AIS and TUC, especially on the 2600MHz range.

Mr Buddhipongse said NT needs to have more partnerships for 5G services as the slots it holds are insufficient to roll out 5G services nationwide.

"NT is in talks with the operators that hold 2600MHz licences," he said.

Mr Buddhipongse said NT plans to participate in the planned auction for the right to use satellite orbital slots, which the National Broadcasting and Telecommunications Commission has scheduled for this year.

"Development of a satellite business is one mission on NT's business roadmap," he said.