Pandemic has further exposed weaknesses throughout the region and in the online world that allow shady operators to thrive.

Not only has the Covid-19 pandemic exposed flaws in social and health systems, disrupted supply chains and taken at least 38,000 lives across Southeast Asia, it has also shed light on the growing problem of illicit trade in the region.

Smuggling, counterfeiting and related illegal activities rob the global economy of US$2.2 trillion annually, with trade in counterfeit goods accounting for $461 billion. In Asean, the counterfeit goods market was worth $35.9 billion in 2018, according to a paper published by the EU-Asean Business Council (EU-ABC).

"It is estimated that Asean's counterfeit market contributes close to 10% of the international trade in these goods," noted Chris Humphrey, executive director of the EU-ABC. "There is no doubt that if left unchecked, this illegal industry will grow, at a time when we are faced with an unprecedented health and economic crisis.

"Counterfeiters and smugglers are known to exploit systemic weaknesses and Asean leaders need to see the urgency to coordinate and collaborate to combat against this transboundary issue."

A report titled "Illicit Trade in a Time of Crisis", published by the Organisation for Economic Cooperation and Development (OECD), provides an update on how the illicit trade landscape has been affected by the Covid crisis, with potentially long-lasting implications.

When the World Health Organisation (WHO) declared the coronavirus a pandemic, Operation Pangea, Interpol's global pharmaceutical crime-fighting unit, made 121 arrests across 90 countries in a single week in March 2020. The "week of action" resulted in the closure of more than 2,500 web links, including websites, social media pages, online marketplaces and online advertisements for illicit pharmaceuticals with a combined value of $14 million.

Labour shortages, lockdowns and shifting priorities in government agencies, especially customs and law enforcement, together with global transport restrictions, are also having an impact on trade patterns. This will push more illicit trade into areas such as free trade zones (FTZs), the report warned.

"The illicit trade of pharmaceutical ingredients, medicines and diagnostics is a danger for the life and well-being of patients and has to be prevented. Criminals stand to benefit from the Covid crisis," commented Dr Patrick Kos, head of the legal and compliance unit at Roche Pharma Asia Pacific.

He called for stepped-up anti-counterfeit and supply chain security, stronger laws and enforcement, and education of the public and training of local officials.

The repercussions of Covid, such as unemployment and reduced purchasing power, will be felt over the medium and longer term. When coupled with booming e-commerce channels and ineffectively enforced customs procedures, they provide a perfect opportunity for criminals to exploit the broken supply chain. 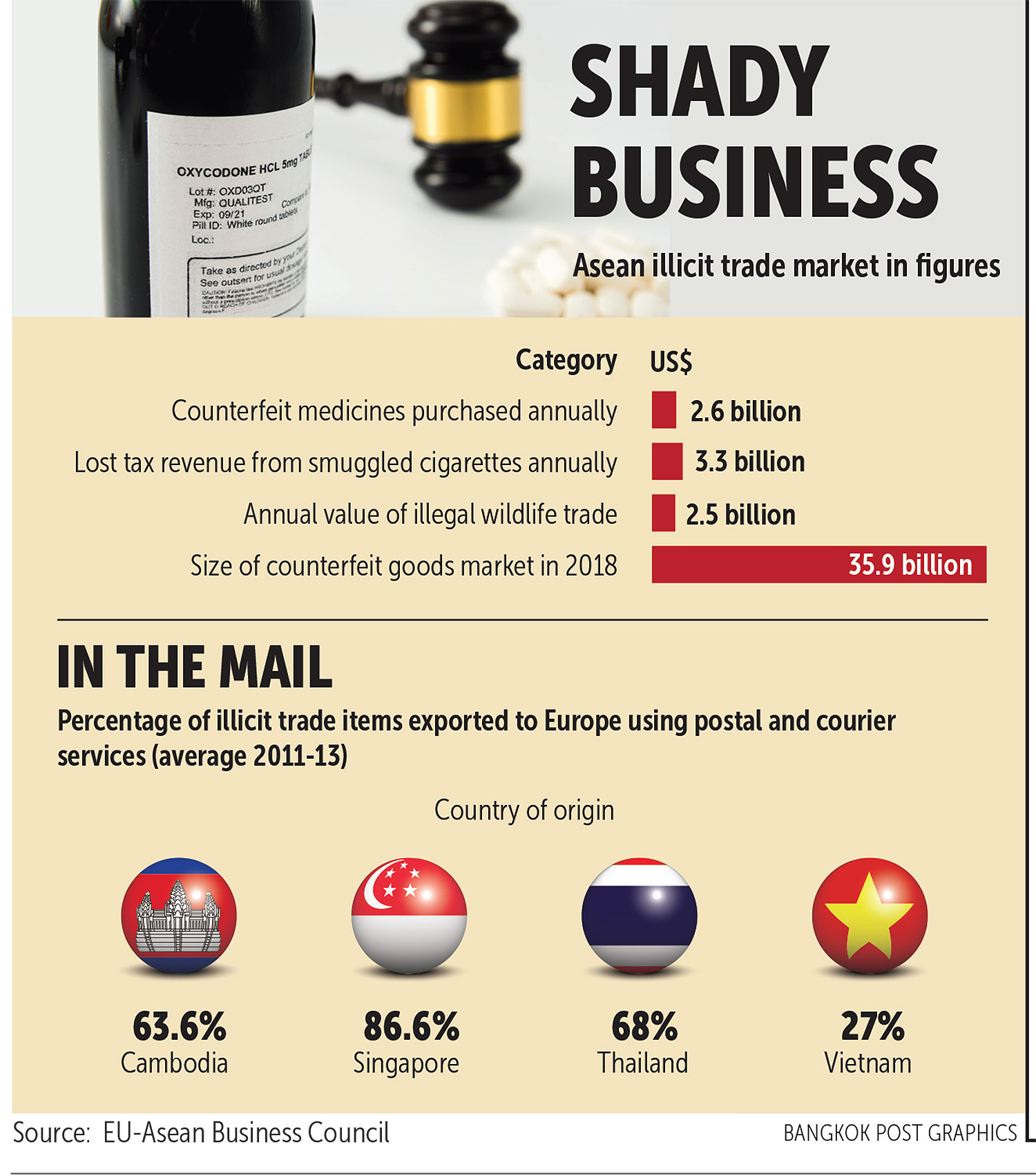 Asean has long been a major global counterfeit hub, thanks to its proximity to China, the largest manufacturer and consumer of both counterfeit and legitimate products.

Rapid urbanisation and growing affluence in Southeast Asia have fuelled a rise in illicit trade, affecting biodiversity and wildlife, human lives, and causing monetary losses to governments and legitimate businesses.

Though almost all industries are affected, the region is a hotbed for illicit trade in tobacco, alcohol, toys and games, automotive parts and pharmaceuticals. Copyright piracy related to movies, music and other media is also a perennial problem.

Counterfeiters pose both monetary and reputational threats to well-known brands, says Robin Smith, vice-president and general counsel for the Lego Group in Asia Pacific and China.

Asean's young demographic and growing household incomes have led to increased demand for toys and games in the region. The sector has recorded average annual revenue growth of 10% across the region.

This increasing demand, combined with expanding e-commerce channels, has led to more counterfeit toys in the market. Low-quality knock-offs are often sold without necessary safety testing and labelling and can be harmful to children.

According to Mr Smith, while the pandemic has increased demand for toys and games as families spend more time at home, it has also increased risks.

"Our research shows that children want more family playtime and that parents saw play as providing a vital role in keeping the whole family entertained during the Covid-19 pandemic," he pointed out.

"Unfortunately, this increased demand also has led to inferior toys being traded illicitly, which due to the poor quality and safety standards of the goods being sold, could cause risks to a child's health and development."

Although Asean nations except Indonesia are signatories to the WHO Convention on Tobacco Control, none are parties to the protocol on international cooperation and information sharing between organisations and customs offices.

Illicit trade in tobacco results in substantial tax revenue losses in a region where over 20% of the adult population are smokers.

During the enforcement of the movement control order in Malaysia, the country lost about 1 billion ringgit through unpaid taxes.

Illicit alcohol is another plague, with unlicensed distilleries packaging products to look like established brands or filling fake liquid in original bottles. Such operations harm brand reputation and cause tax shortfalls, and also have taken lives.

A WHO report forecasts that Asean will be the region with the highest consumption of unregistered alcohol by 2025, at 4.5 to 6.2 litres per capita per year.

A ban on sales and distribution of alcohol during the pandemic has exacerbated this problem by offering incentives to illicit suppliers to enter the market to meet new demand.

Fake products are also a major concern for the automotive industry, a key economic driver in Asean, especially Thailand. Fake brake pads and airbags, which are critical to car safety, are found in large volumes and it's difficult to distinguish them by simply looking at their outer appearance.

Southeast Asia also is used for cheaper outsourced manufacturing of pharmaceutical products from China and India, resulting in increasing volumes of substandard medicines.

Globally, the counterfeit pharmaceutical trade is worth $4.5 billion. Falsified medicines are often not properly formulated and may contain harmful substances, posing a considerable threat to human lives.

According to the OECD, the most frequently counterfeited medication class is antibiotics, which accounted for 35.4% of the value of all seized counterfeit drugs, followed by male impotence pills (15.6%), painkillers (10.4%) and anti-malaria pills (8.9%).

The UN Office on Drugs and Crime (UNODC) also estimated that 47% of anti-malaria medicines tested in Asean are found to be fake.

The illicit pesticide trade is another growing concern. Illegal pesticides often contain banned or restricted chemicals, and are often falsely declared to avoid international labelling requirements that ensure transport safety. Their use puts the environment and sustainable agriculture as well as human lives at serious risk.

The world has also seen a surge in illicit digital media, especially online streaming of entertainment content, as people stuck at home spend more time in front of screens. Studies have estimated that film piracy increased last year by 41% in the US, 43% in the UK and 63% in India.

As more and more business is conducted online, the presence of fraud and fake goods is also growing. This has implications in Asean where the fast-growing e-commerce market is projected to be worth $300 billion by 2025, according to a study by Google and Temasek.

Online fraud and illicit trade already cost the region an estimated $260 million per year. The worst affected countries are Indonesia, Vietnam, the Philippines and Thailand, given their substantial base of users and low awareness of fraud.

E-commerce platform operators are often outside the jurisdiction of law enforcement agencies which makes it difficult to crack down. There is also no unified approach across platforms to tackle the problem in the region. 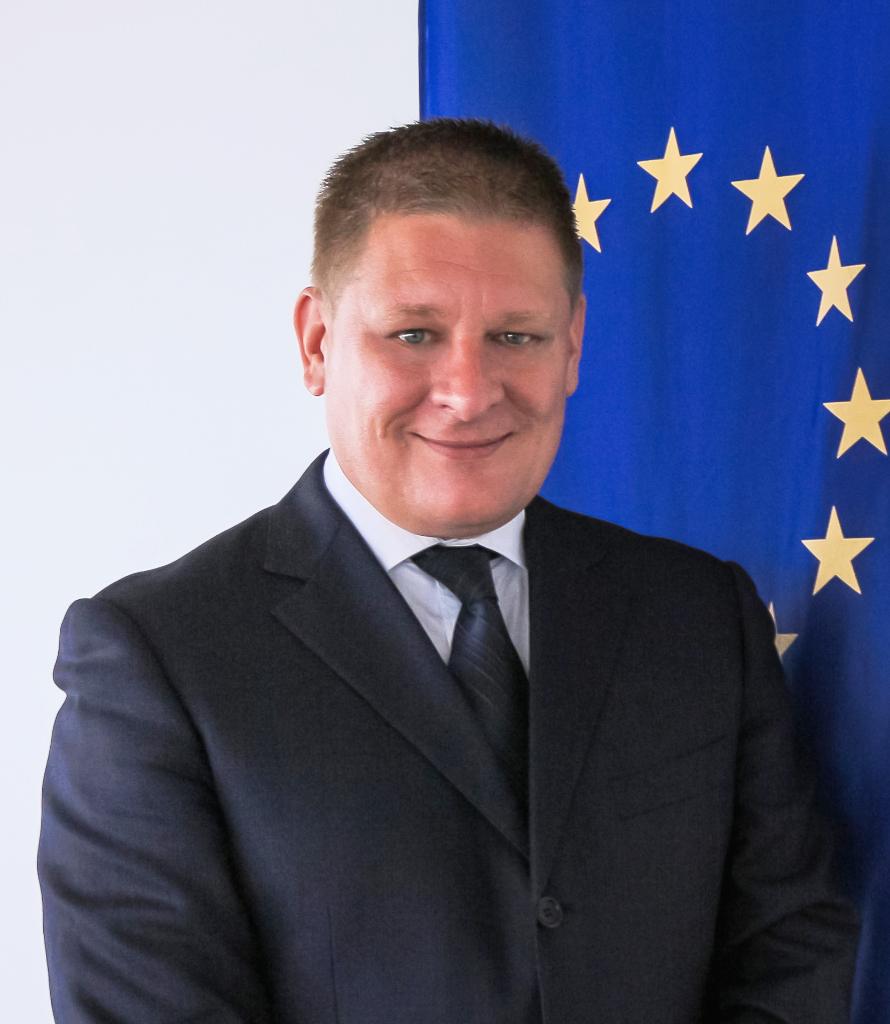 Free trade zones in Asean, which now total around 1,000, were set up to facilitate easier movement of goods. But relaxed oversight and regulations and limited taxes intended to help legitimate businesses are helping crooks as well.

International criminal networks take advantage of reduced regulations to assemble counterfeits in different countries, forge documents to hide the contents of shipments and the identity of manufacturers. Undervalued imported goods issued with false invoices and fake retail licences end up being distributed through approved supply chains.

Online advertising and e-commerce, together with a surge in small-parcel delivery services and FTZs, have helped to build a perfect lower-risk ecosystem and increase the profitability of counterfeit goods.

Porous borders and discrepancies in excise tax policies make smuggling a rampant problem in the region. The most smuggled goods are alcohol and tobacco, especially illicit "white" cigarettes -- legally manufactured cigarettes on which taxes have not been paid.

Underdeclaration of shipment values is also a major headache for governments, who rely on customs and excise taxes as an essential source of revenue. However, tax collection relies on an ecosystem of transparent customs procedures, effective monitoring, appropriate and simple tax structures as well as consistent long-term policies. Most Asean jurisdictions fall short in this regard.

As Asean navigates the new normal, it has an opportunity to apply lockdown lessons to create a resilient post-crisis regulatory environment.

Mr Humphrey called on Asean leaders "to see the urgency to coordinate and collaborate to combat against this transboundary issue".

A strengthened customs environment, the group, says, could reduce trade costs by 0.5% to 1.1%. This can be done by empowering customs authorities, utilising full investigative techniques, digitising key information and practices, as well as applying criminal penalties.

Sharing information and cross-border collaboration is also crucial to give authorities a comprehensive overview of the threat.

Since online platforms are increasingly vulnerable to exploitation and misuse ranging from illicit digital trade to cybercrime and money laundering, a clean digital environment is needed as well.

This will involve improving transparency in digital supply chains in online marketplaces and social media platforms, as well as protective technologies such as web blocking, content filtering and risk-scoring services.

Both the OECD and the EU-ABC recommend "Know Your Business Customer" policies which require more demanding registration and verification systems for domain names to hold registries and registrars accountable.

The e-commerce boom has also resulted in more illicit products delivered through postal and courier services. For illicit traders, small packages offer a way to avoid detection and minimise risk.

"Asean's investment in combatting illicit trade today will continue to reap benefits well into the future, and will play an important role in shaping a prosperous and safe Asean community for future generations," said Mr Smith of Lego.

Public awareness of illicit trade is equally important. All stakeholders need to know the dangerous consequences for the economy, health and safety and the environment.

Creating both online and offline campaigns, educating platform providers on how their infrastructure could be exploited, and integrating networks of non-governmental organisations and governments can help to raise public awareness. 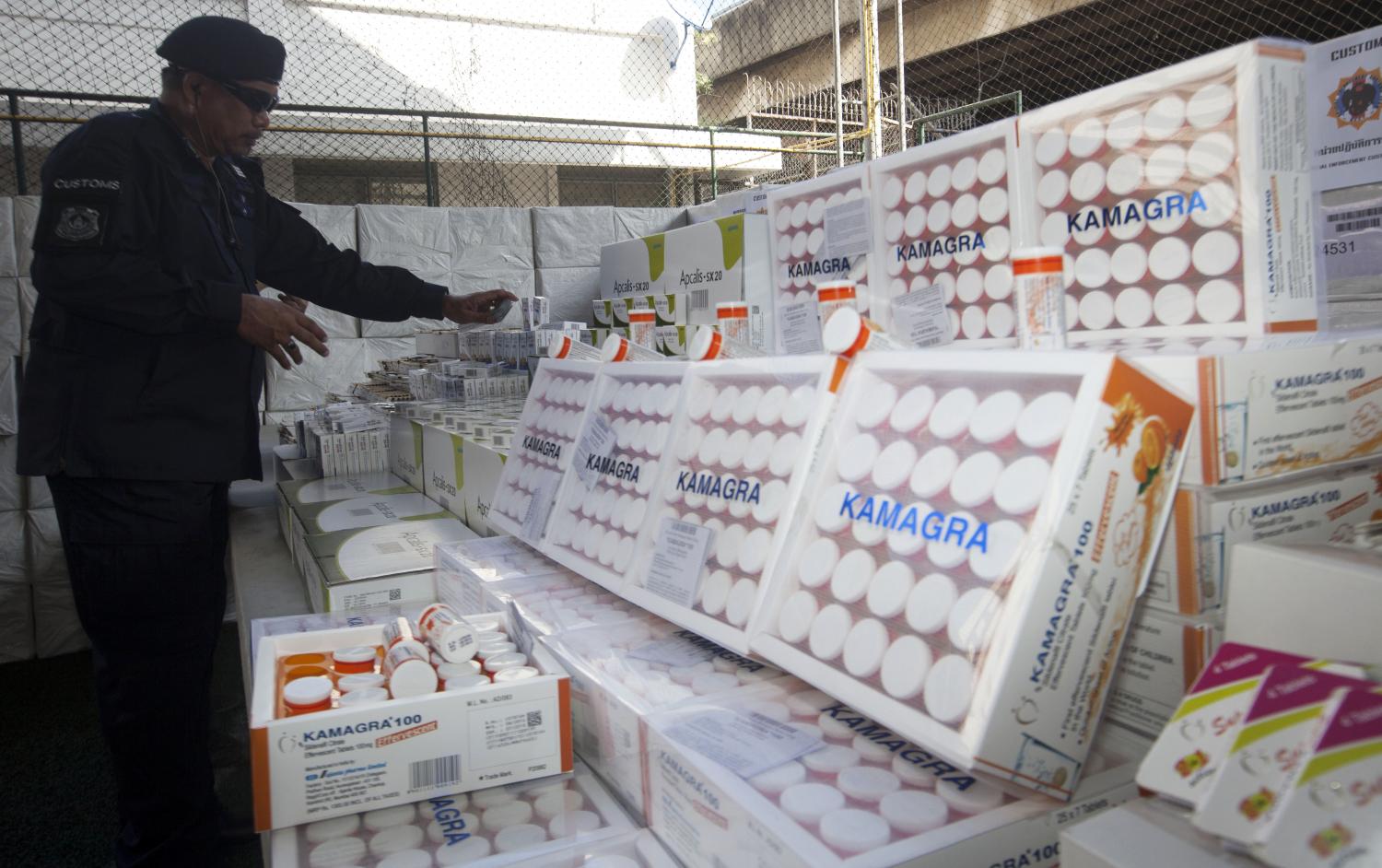 A customs officer examines a shipment of smuggled erectile-dysfunction medication seized in Bangkok. Many men seek to buy Indian-made Kamagra because they see it as a cheap alternative to Viagra, Cialis or Levitra. Photo: Pawat Laupaisarntaksin