Two mega-deals will help regional economies recover more quickly from the pandemic and reap major gains in the long term. By Nareerat Wiriyapong

Two mega free-trade agreements (FTAs) will contribute immediately to the recovery of Southeast Asian countries because they broaden and deepen free trade with key partners at a time when the region is dealing with the economic fallout of the coronavirus pandemic, leading analysts say. 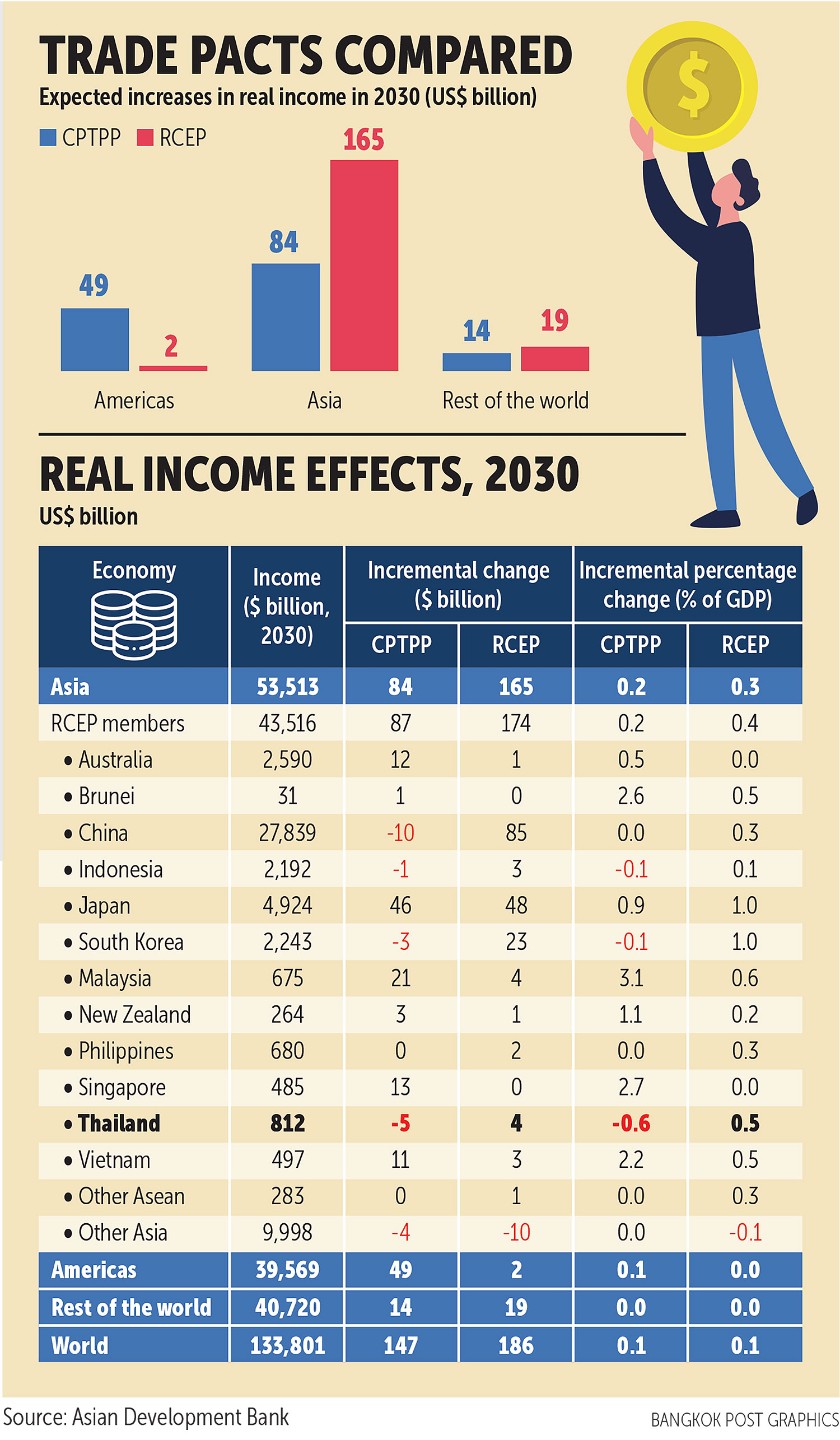 Signed at the Asean Summit hosted by Hanoi on Nov 15 last year, the Regional Comprehensive Economic Partnership (RCEP) is seen as a positive affirmation of the region's willingness to maintain open trade flows. The Asia-wide pact involves 10 Asean nations, the so-called Plus Three economies -- China, Japan and South Korea -- and Australia and New Zealand.

It's also noteworthy that the RCEP is the first multilateral agreement to include China and the first FTA that links China and Japan, and Japan and Korea.

While the signing of the RCEP is a welcome initial step, its effects would be greater if integration were deeper, says the World Bank. Deepening trade reform and cooperation, especially in services sectors -- such as finance, transport and communications -- would enhance business productivity and help people take advantage of new opportunities.

Four Asean countries -- Brunei, Singapore, Malaysia and Vietnam -- together with Japan, Australia and New Zealand are also part of the 11-member Comprehensive and Progressive Agreement for Trans-Pacific Partnership (CPTPP). Effective since Dec 30, 2018, the CPTPP also includes four other Pacific Rim nations -- Canada, Peru, Chile and Mexico -- altogether accounting for 13% of global GDP, 14% of global trade and a population of about 507 million. The United States walked away from its predecessor, the Trans-Pacific Partnership (TPP), after former president Donald Trump took office in early 2017.

"The RCEP and the CPTPP will immediately contribute to recovery even though the policy reforms agreed under the agreements will take time to implement," Aaditya Mattoo, the World Bank's chief economist for East Asia and the Pacific, told Asia Focus.

The RCEP will enter into force following ratification by at least six Asean countries and three non-Asean signatories, a process that will take months to start and years to complete. It is open for accession by any economy 18 months after it takes effect.

Fast-track accession is available for India, which entered the negotiations in 2012, only to walk away in 2019, mainly because it feared its businesses would not be able to compete with cheaper Chinese goods. As an original negotiating party, it can rejoin on the date the agreement enters into force if it so chooses.

"Trade has suffered over the last decade from three successive shocks: the Great Recession, China-US trade tensions and the Covid-19 pandemic," Mr Mattoo pointed out.

"These two agreements, the only major ones to be signed in recent years, have dispelled some of the policy uncertainty and the fear of a retreat from globalisation that was inhibiting both trade and investment."

He acknowledged that even though the CPTPP has greater discipline, the RCEP is likely to "increase participants' trade and incomes by twice as much" because the latter has wider country coverage, especially in Asia.

The RCEP also involves Asean with China and South Korea -- two economies with fewer prior agreements in the region, added Mr Mattoo.

"Even though the RCEP does not go as far as the CPTPP, it still initiates major reforms," he said, adding that the agreement does much to reduce non-tariff barriers to trade, for example by encouraging importing countries to accept the product standards of other members.

As well, the agreement aligns rules of origin for all 15 countries, allowing firms to develop regional production chains. "The RCEP could lead on average to an increase in trade by 10% and incomes by 1%. However, the RCEP would have been even more impactful if it had followed the CPTPP in encouraging electronic commerce and reforming state-owned enterprises," Mr Mattoo acknowledged.

The Asian Development Bank (ADB) agreed, saying that the signing of the RCEP bodes well for strengthening regional supply chains and is a pivotal moment toward building a regional trading bloc on a mammoth scale.

The RCEP is expected to spur renewed momentum for intraregional trade and strengthen value chains among the plus-three countries, as well as between them and other members, the ADB said in a report issued in December.

"While the RCEP is the first free trade agreement covering China, Japan and South Korea at the same time, it bears mentioning that it is also the first to include two of the world's three largest economies," the report noted.

Unlike the CPTPP, the RCEP does not include provisions to harmonise regulatory standards on the environment or labour markets, it added.

In the meantime, Asean countries that have joined the CPTPP can expect additional opportunities. For example, it could help Brunei diversify its economy away from oil and gas. It could allow Singapore to have a local presence in accounting, consulting and engineering in other CPTPP members.

For Vietnam, it would bring footwear, textiles and electronic products to Canada, Mexico and Peru, with which it has had limited trade relations so far. Malaysia could also gain from the expansion of its export market, having a positive impact on employment.

The ADB cited a study by the Peterson Institute for International Economics, which estimated economic gains for the global economy from the combination of the CPTPP and the RCEP, using a computable general equilibrium model. In a business-as-usual scenario that assumed a return to a pre-trade war path, they added the CPTPP and RCEP agreements in sequence, estimating their respective incremental effects.

According to economists Peter Petri and Michael Plummer, the authors of the study, the CPTPP is projected to increase real income worldwide by $147 billion by 2030 and the RCEP could add $186 billion to this gain.

"The potential benefits from the two mega-regional trade agreements for Asia (including non-members) far exceed gains the agreements are expected to generate in the rest of the world," the ADB report acknowledged.

The bank also noted that traditional economic modelling exercises forecast that RCEP members, particularly the plus-three countries, will gain the most from the RCEP. The outsize gains for China, Japan and South Korea reflect their sheer economic size and comparative advantage in higher-end, richer value-added segments of industrial production.

"However, other economies also gain significantly from larger regional trade, stronger regional value-chain links and the opening of more opportunities for foreign investment," the report noted. "As well as reaping benefits from deeper regional economic integration, members could take the regional trading bloc as a springboard to deepen economic reforms and improve their industries' competitiveness."

Standard Chartered, in a December 2020 report, also pointed out that the RCEP is a good deal for Japan. "The free-trade agreement will benefit Japan, which does not have bilateral FTAs with China and (South) Korea," the UK-based banking group said.

The agreement will eliminate tariffs on 86% of industrial goods exported from Japan to China, benefiting Japanese exporters such as auto-parts suppliers. Politically sensitive agricultural products were exempted from the deal, it added.