"Thailand's rice exports still have to brave a spate of challenges, be it a strong baht, the container shortage or relatively higher prices than those of competitors," said Mr Keerati.

"Weak purchasing power of rice-importing countries due to the impact of the Covid-19 pandemic will also affect rice purchase demand."

However, Mr Keerati noted natural disasters in rice exporting countries and importers, if they occured, may trigger rice demand.

Mr Keerati attributed last year's rice export fall largely to the strong baht which made Thai rice more expensive than the grains of competitors. China also turned out to be a rice exporter to drain out its hefty rice stocks.

Thailand has also limited the supply of rice varieties to serve customers' demand, especially soft-textured white rice and encountered a drastic container shortage during the end of last year. 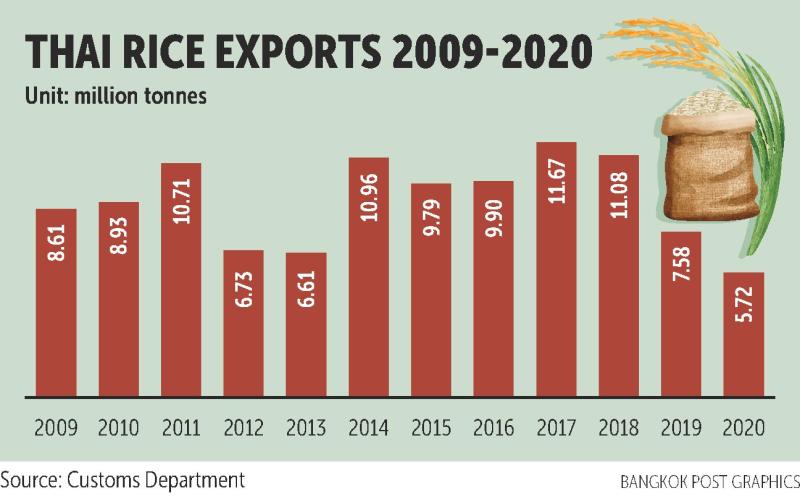 Drought is also expected to lower Thailand's rice production this year, he said.

"Thailand should focus this year on developing soft-textured rice varieties which are in high demand in the world market and upgrade laws and regulations about rice research and imports."

He said the stronger baht is not a boon for rice exports, and it may appreciate to below 28 baht per US dollar this year.

"This year the new crop production in Vietnam from the winter-spring season in February to March is expected to be very good, while China still controls stock as high as 120 million tonnes," said Mr Chookiat.