Myanmar's military checkpoint is seen on the way to the congress compound in Nay Pyi Taw on Monday. (Reuters photo)

Thailand is estimated to forego about 50 million baht a day from inconvenient transportation of goods and strict security checks by Myanmar's military administration.

According to Aat Pisanwanich, director of the Center for International Trade Studies at the University of the Thai Chamber of Commerce, the impact would be protracted to more than 1.5-2 billion baht a month if tight security inspections continue.

"We expect Myanmar's political crisis to return to normal in the second month," said Mr Aat. "However, we need to follow up political stances of the United States, Europe, Japan and allied countries and their actions or economic sanctions after the Myanmar coup."

According to Mr Aat, losses to Thailand depend on the degree of economic sanctions against Myanmar which will affect both purchasing power and investment in the neighbouring country.

With lower purchasing power, Myanmar, which is already being battered by Covid-19, is likely to import fewer goods from Thailand. 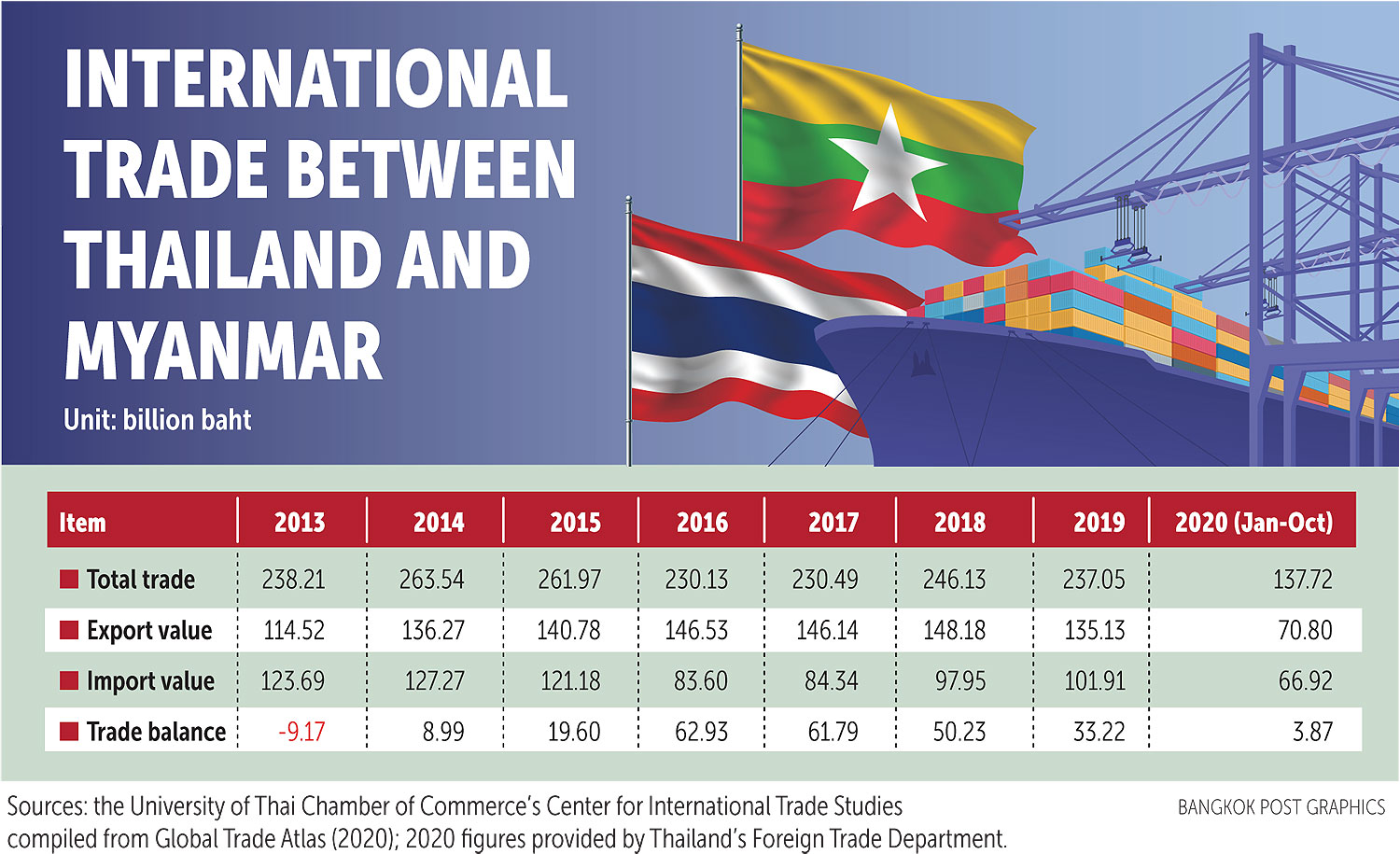 According to Mr Aat, foreign investors are expected to take 2-3 months to evaluate the impact and wait and see how the military regime handles the situation.

"The current situation clearly demonstrates that high political uncertainty still exists in Myanmar. Though there were elections in 2015 and 2020 and the country is turning to democracy, political uncertainty will be an important factor for investors to decide further investment," Mr Aat said.

"This will affect the economy, trade and investment in Myanmar whose per capita income is the lowest among CLMV countries."

Mr Aat said overall investment projects in Myanmar are expected to be frozen and all international trade negotiations will be subject to review.

Tak Chamber of Commerce president Prasert Jeungkitrungrote said the unexpected Myanmar coup will definitely deal a heavy blow to border trade between Thailand and Myanmar, particularly through Mae Sot border checkpoint in Tak province -- the largest border checkpoint with Myanmar in the North, fetching border trade worth at least 80 billion baht a year.

According to Mr Prasert, Tak Chamber of Commerce expects the army to take control of Myanmar for at least 1-2 years.

"We're waiting for an official order or announcement from the Myanmar army and we are not yet able to evaluate the impact of the incident as we have to wait and see whether the border checkpoints will be subject to closure."

Kalin Sarasin, chairman of the Thai Chamber of Commerce, said the impact of the coup on exports is unlikely to become substantial and Myanmar is unlikely to close border checkpoints, citing the military administration is fully aware of the country's current economic problem mired by the deadly virus.

Supant Mongkolsuthree, chairman of the Federation of Thai Industries (FTI), believes Myanmar's military authorities will not resort to a harsher solution in their conflict with civilian leader Aung San Suu Kyi.

But if the situation escalates, Myanmar may face economic sanctions from many countries, especially the US and European countries.

At the moment, the FTI still holds an optimistic view of the problem, hoping the military will act carefully in order to avoid an impact on foreign investment, he said.

Thai investors in Myanmar are in a range of industries from hospitality and consumer products to petroleum and construction.

It will not be good for their businesses if the power grab causes the international community to step in and respond with economic sanctions.

Malika Boonmeetrakool Mahasook, adviser to commerce minister Jurin Laksanawisit, said Mr Jurin has already ordered officials to evaluate the impact and ordered the Foreign Trade Department, which is in charge of border trade, to closely monitor and update on the situation.

The Trade Policy and Strategy Office has also been ordered to cooperate with the private sector to tackle border trade obstacles.

Finance Minister Arkhom Termpittayapaisith said it is too soon to tell whether the coup in Myanmar will affect development projects of the Dawei Special Economic Zone (DSEZ), which is a joint venture between Japan, Myanmar and Thailand.

Regarding how SET-listed Italian-Thai Development Plc (ITD) has been notified on termination of seven concession agreements at the DSEZ, Thai officials and ITD will negotiate with Myanmar counterparts to seek a solution, said Mr Arkhom.

But no negotiation has begun so far, he said.

ITD in January submitted a request for government help to Prime Minister Prayut Chan-o-cha after the Dawei Special Economic Zone Management Committee sent a notice of termination for seven concession agreements at the DSEZ to five project companies, which ITD has partial ownership.

PATTANI: An official at the provincial land office has been arrested for allegedly demanding a 120,000-baht bribe in exchange for issuing land title deeds.