The Investor Confidence Index (ICI) survey for January, which measures February to April 2021, remains in the bullish zone for the second consecutive month, spurred by the prospect of Covid-19 vaccines, foreign inflows and higher earnings among listed companies. 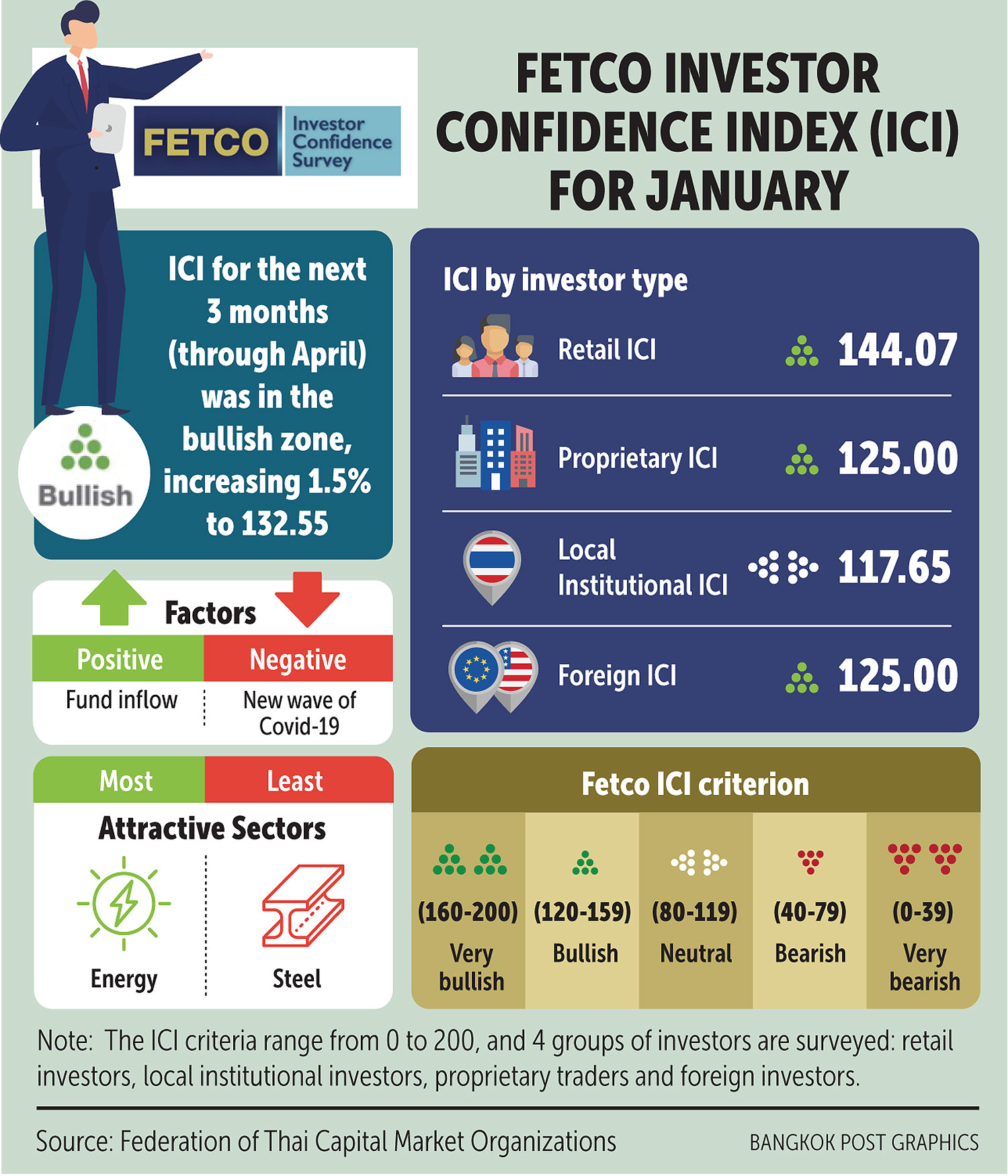 The index rose by 1.5% to 132.55 from December's 130.63, according to the monthly survey by the Federation of Thai Capital Market Organizations (Fetco).

The retail investor ICI climbed from neutral to bullish territory, increasing by 22% to 144.07 points, while confidence among institutional investors remains neutral at 117.65 points.

The drop in confidence among foreign investors, while remaining in the bullish zone, reflects their concerns over the euro-zone's economic issues and the Monetary Policy Committee's (MPC) policy rate.

Foreign investors believe the capital market will be supported by the prospect of fund inflows, domestic economic growth and the performance of listed companies, said Fetco.

An improvement in the outbreak situation is the strongest factor boosting confidence among retail investors, brokerage firms and local institutions, followed by listed companies' earnings and foreign inflows.

The re-emergence of the pandemic is the biggest factor dragging down investor sentiment.

"Investors are still concerned about the outbreak," said Paiboon Nalinthrangkurn, chairman of Fetco.

The SET Index at the end of January increased by 1.2% from the end of 2020, which lagged the MSCI Emerging Index.

Mr Paiboon said global investors are moving their investments to emerging markets, but may not come to Thailand until the second half of the year.

"I believe the economy will start to recover this year, followed by the tourism sector, the country's main GDP driver, in 2022," he said.

Mr Paiboon expects Thai shares to continue the uptrend in 2022.

Investors view the energy and utility sectors as being the most attractive, followed by petrochemicals, chemicals and commerce, said Fetco.

Ariya Tiranaprakit, deputy managing director of the Thai Bond Market Association, expects the MPC to keep the policy interest rate unchanged at 0.5% at its meeting later this month.