Thailand retains the pole position in the world for internet users engaging in mobile banking and financial services apps.

Thailand retains the pole position in the world for internet users engaging in mobile banking and financial services apps while becoming one of the top five for e-commerce adoption, mobile payment, mobile commerce and QR code usage, according to the Digital 2021 report.

The annual report was published by We Are Social, a global digital agency, in partnership with social media solutions provider Hootsuite, focusing on digital, mobile and social media trends around the world.

The report said Thailand tops the ranking for banking and financial service app use -- the third year in a row -- with 68.1% of internet users aged 16-64 saying they engage with these apps every month.

Thailand was trailed by South Africa with 64% and Poland with 57.7% while the worldwide average stands at 38.7%.

Thailand ranks second for mobile payments with 45.3% of internet users saying they used a mobile payment service in the past month, well above the worldwide average of 30.9%.

Thailand also ranks second for mobile commerce adoption with 74.2% of internet users saying they bought something online via a mobile device in the past month. Indonesia tops the chart with 79.1% of users while the global average is at 55.4%. 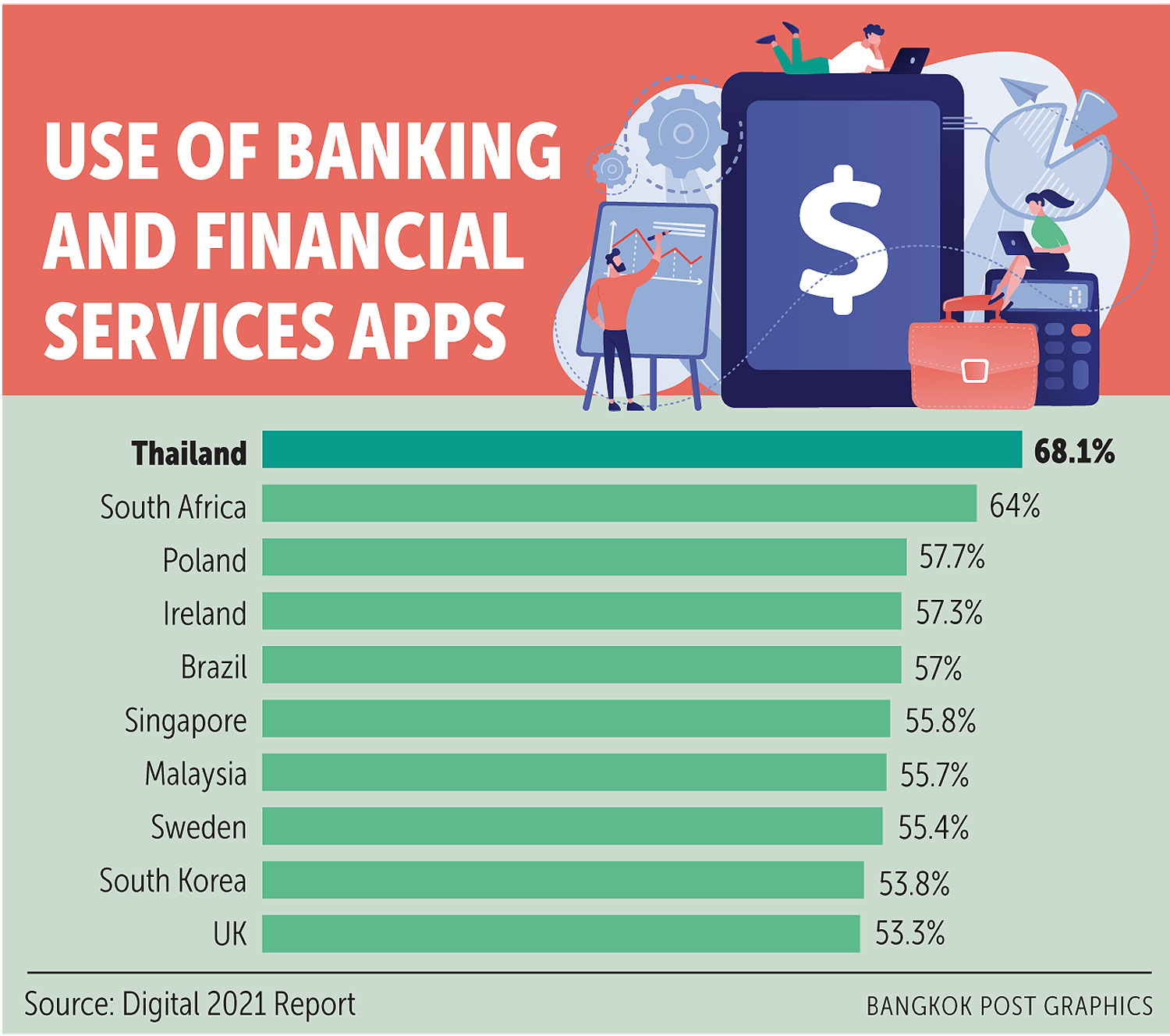 Thailand ranks third in e-commerce adoption as 83.6% of internet users said they bought something online via any device in the past month, trailing Indonesia and the UK with 87.1% and 85.5%, respectively.

Thailand ranks fifth in the use of QR codes with 60.4% of the internet users surveyed indicating they used QR codes on a mobile device in the past month. Singapore tops the rank in this category.

In terms of online food deliveries, Thailand ranks tenth with 61% of internet users surveyed saying they used the service in the past month, versus the global average of 55.5%.

Indonesia ranks first in this category, followed by Brazil and Malaysia.

Thailand ranks 12th in the use of ride-hailing apps with 31.9% saying they used the service in the past month. Indonesia tops this segment, followed by Brazil and Singapore.

The research says consumers aged 35-44 are a group that has contributed to the increased use of mobile banking and e-wallet services. In 2020, the volume of money transfers and purchases via mobile banking services is projected to be in the range of 7.7-7.9 billion transactions, at a growth rate of 57.5-61% year-on-year, while the value is projected at 28.9-29.7 trillion baht, with growth of 18.4-21.7% year-on-year.