Land prices to spike in H2

Land prices in Greater Bangkok are projected to rise at a rapid rate in the second half of 2021, in part because of the forecast of an economic recovery.

The land price index escalated from 2019 before slowing down in the third quarter of 2020 to 0.7% growth quarter-on-quarter, he said.

But the quarterly margin increased to 7.3% in the fourth quarter.

"But with an economic and property market recovery expected, a higher increase as in 2019 will likely be seen in the second half of this year," said Mr Vichai.

Mr Vichai said the change in land prices in Greater Bangkok was largely dominated by land prices in locations near mass transit lines which soared two to four times higher than the overall land price.

Land prices in locations near the Blue Line from Bang Khae to Phutthamonthon Sai 4 topped the growth rate in the fourth quarter last year at 67.6% year-on-year and 33.7% quarter-on-quarter as this section was a future project. 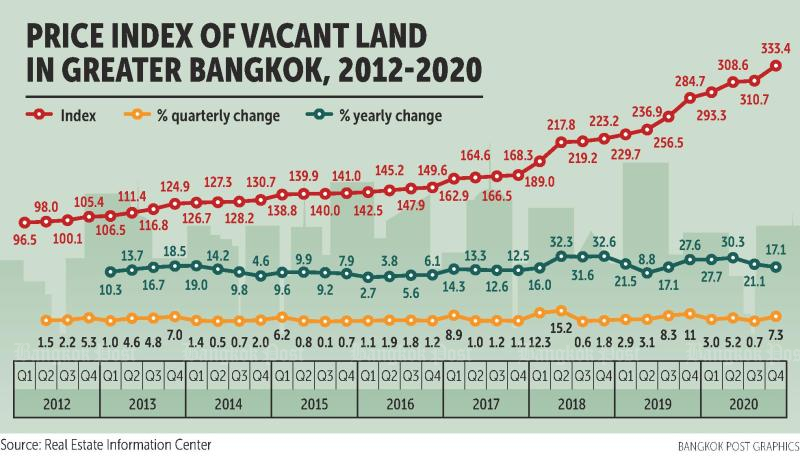 This location ranked third in the second and third quarters of 2020 and fourth in the first quarter of 2020, surpassing locations near the Green Line from Ku Kot to Lam Luk Ka and those near the Pink Line from Kae Rai to Min Buri.

The Green Line from Ku Kot to Lam Luk Ka saw the largest increase in the land price index for three consecutive quarters from the fourth quarter of 2019 to the second quarter of 2020 before losing to the Pink Line in the third quarter of last year.

The spike in land prices in the area from Ku Kot to Lam Luk Ka dropped to only 10.4% in the fourth quarter last year after a jump of 61.3-66% earlier.

The second biggest increase in the fourth quarter last year was the Light Red Line from Taling Chan to Sala Ya with a year-on-year increase of 43.3% and a quarter-on-quarter rise of 26.6%.

It was the only location ranked in the top five for eight consecutive quarters since the first quarter of 2019.

There were three new mass transit lines emerging in the top five of price index growth. One of them was the Gold Line in Thon Buri which started operating with only three stations in December last year.

The Blue Line from Hua Lamphong to Bang Khae was among the new rising locations, coming in fifth place with a 35.6% rise year-on-year and 16% quarter-on-quarter.