Consumer confidence fell to a nine-month low in January because of a fresh outbreak of Covid-19 cases. Varuth Hirunyatheb

February is characterised by rosy red colours to usher in auspicious occasions and highlight affection, as people celebrate both Chinese New Year and Valentine's Day this month, but questions linger about consumer spending amid the ongoing pandemic.

The allure of spending and travel linked with these special occasions is far less enticing than in previous years, when many Thais and foreign tourists soaked up the atmosphere of the Lunar New Year celebrations.

To address the situation, the government came up with several measures in response to weak consumer spending sentiment.

The new remedies, estimated to be worth almost 1% of GDP, are aimed at shoring up consumer spending power, according to the Fiscal Policy Office (FPO).

Kulaya Tantitemit, acting director-general of the FPO, said the total value of financial remedies rolled out during this quarter would reach 270 billion baht.

On top of the 45 billion baht in spending already expected from eligible applicants in the first phase of the co-payment scheme, a budget of 225 billion has been allocated for the second phase, said Ms Kulaya.

A budget of 20 billion baht has also been allotted for a 500-baht disbursement over a three-month period for holders of the state welfare card. 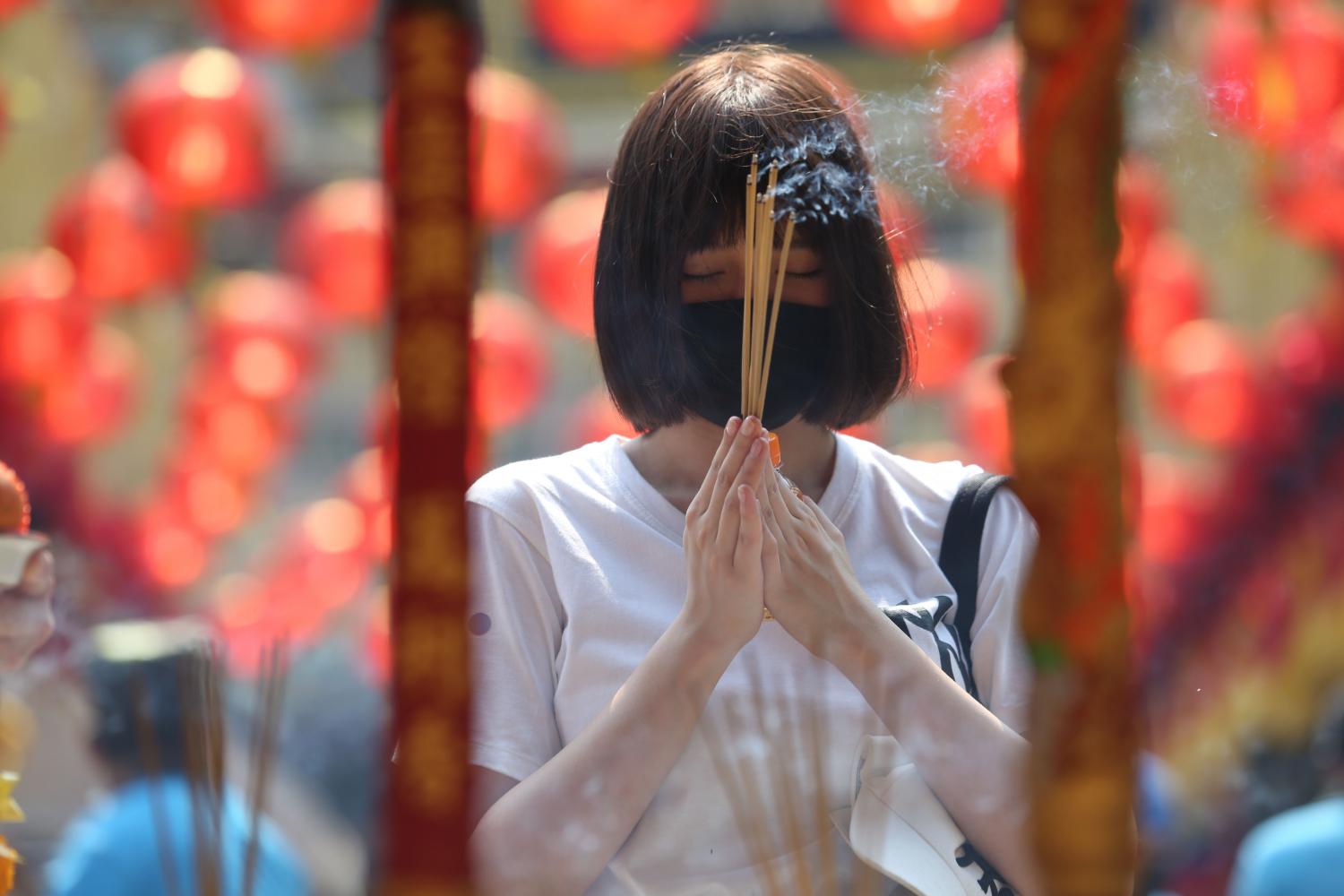 A devotee at Wat Mangkon Kamalawat in Bangkok's Chinatown. The temple was asked to give visitors shorter incense sticks during the holiday to help improve air quality. Varuth Hirunyatheb

These measures combined are estimated to help boost GDP by 0.18%.

A total of 210 billion baht has been allocated for the Rao Chana (We Win) scheme, which disburses 7,000 baht electronically over a period of three months to each eligible applicant.

But a recovery in domestic consumption, which is forecast to emerge in late 2022, ultimately depends on the successful roll-out of a Covid-19 vaccination programme, said Ms Kulaya. 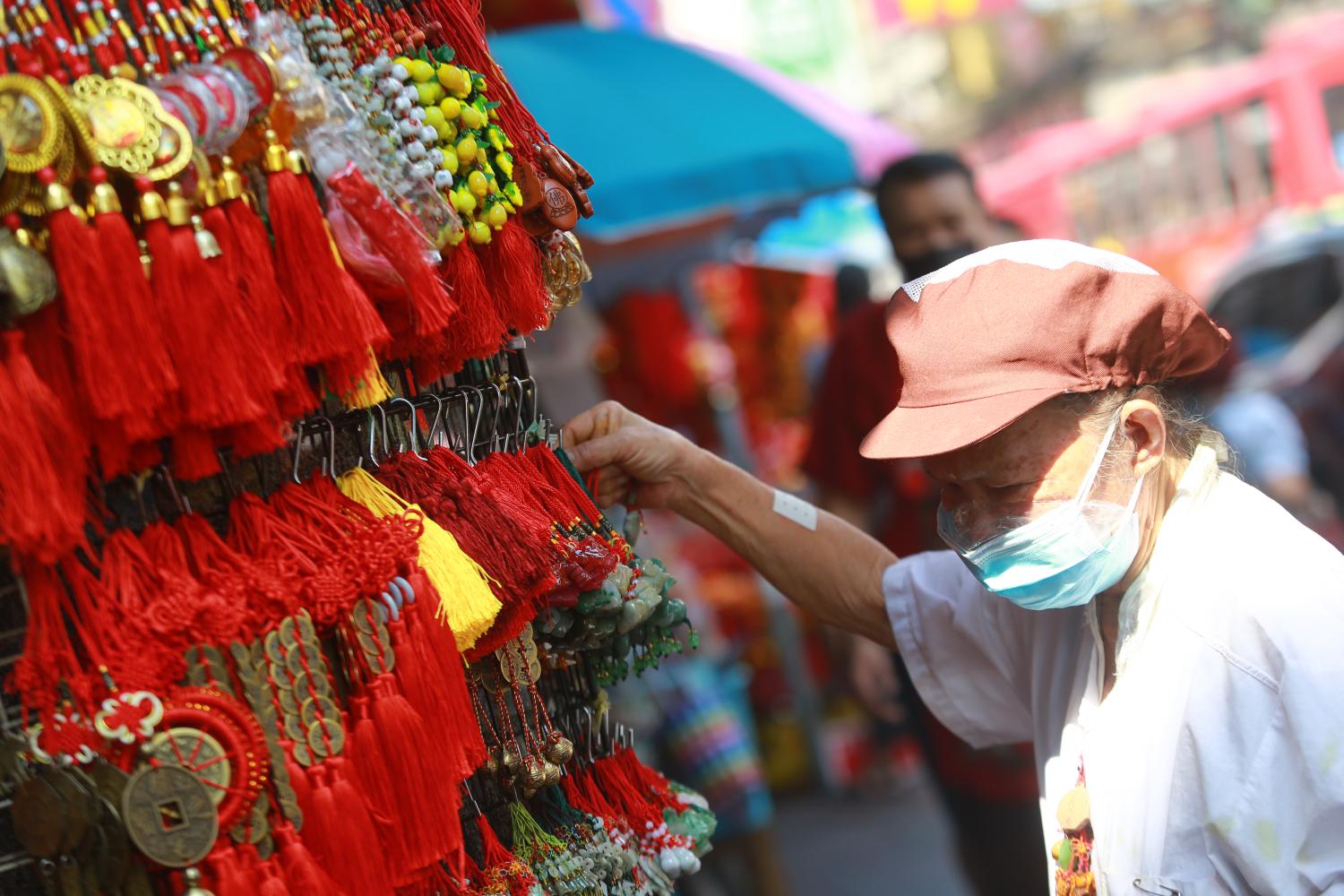 Lucky charms for the Year of the Ox available for purchase at Bangkok's Chinatown during the Chinese New Year.Somchai Poomlard

The Federation of Thai Industries (FTI) expects special holidays and key measures to play a role in stimulating consumer spending during the sluggish economic conditions.

The group believes these actions are much needed as the country encounters another wave of the pandemic.

Although spending for Chinese New Year, the first in a series of eight special holidays planned this year, is projected to be anaemic, more holidays will be vital to boost consumer spending sentiment, according to FTI chairman Supant Mongkolsuthree.

The Thai government made Chinese New Year an official holiday this year in a bid to boost domestic travel and private consumption over the weekend.

The seven other holidays include ones to mark cultural celebrations in the country's northern, northeastern, southern and central regions. They were added to the calendar by the government in December 2020.

Still, the extra holidays send the right message in terms of attempting to bolster domestic tourism and stimulate consumer spending, he said.

When combined with other economic stimulus measures such as government handouts, the additional holidays could generate more consumer spending, said Mr Supant.

"The sooner people receive money, the more likely they are to spend it," he said.

"Any hindrance to the government's measures would only slow the economic recovery process."

"All these measures must be distributed quickly as Thailand is dealing with a fresh outbreak," he said. 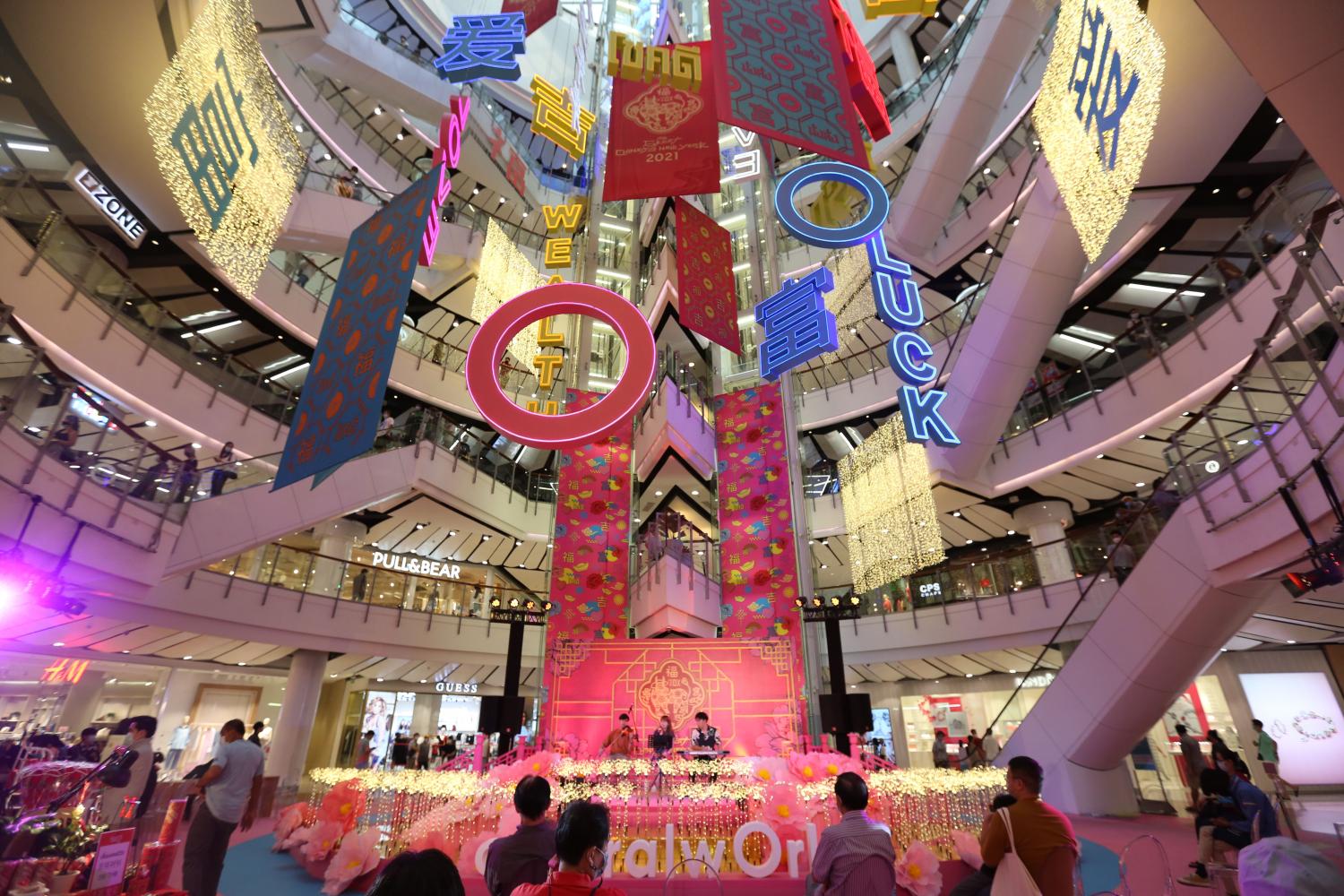 Decorations at CentralWorld for the Chinese New Year. The mall unveiled a promotion to boost spending during the holiday. Varuth Hirunyatheb

Thanavath Phonvichai, president of the University of the Thai Chamber of Commerce, said the government's stimulus packages, especially the co-payment subsidy scheme, Rao Tiew Duay Kan (We Travel Together), Rao Chana and Rao Rak Kan (We Love Each Other), as well as long weekend holidays should help revive the Thai economy.

He estimates each long holiday results in around 2-5 billion baht worth of money being circulated in the economy.

Mr Thanavath said if the government introduces vaccine passport measures, allowing travellers who are inoculated against Covid-19 to use a certificate to enter Thailand without a mandatory 14-day quarantine on arrival, and it continues to provide economic stimulus measures, Thailand's GDP could rise to 3-3.5% growth this year.

"The country's economy is starting to see signs of recovery, as indicated by higher purchase orders of plastic, rising oil prices and foreign investors joining the Thai stock market," he said.

Kalin Sarasin, chairman of the Thai Chamber, agreed the government's stimulus packages and long holiday measures should increase spending in the country.

Retirees and civil servants with relatively high savings plan to travel more domestically and spend more during their trips, while work-from-home measures allow employees to work from anywhere in the country, potentially boosting spending in provincial areas, he said. 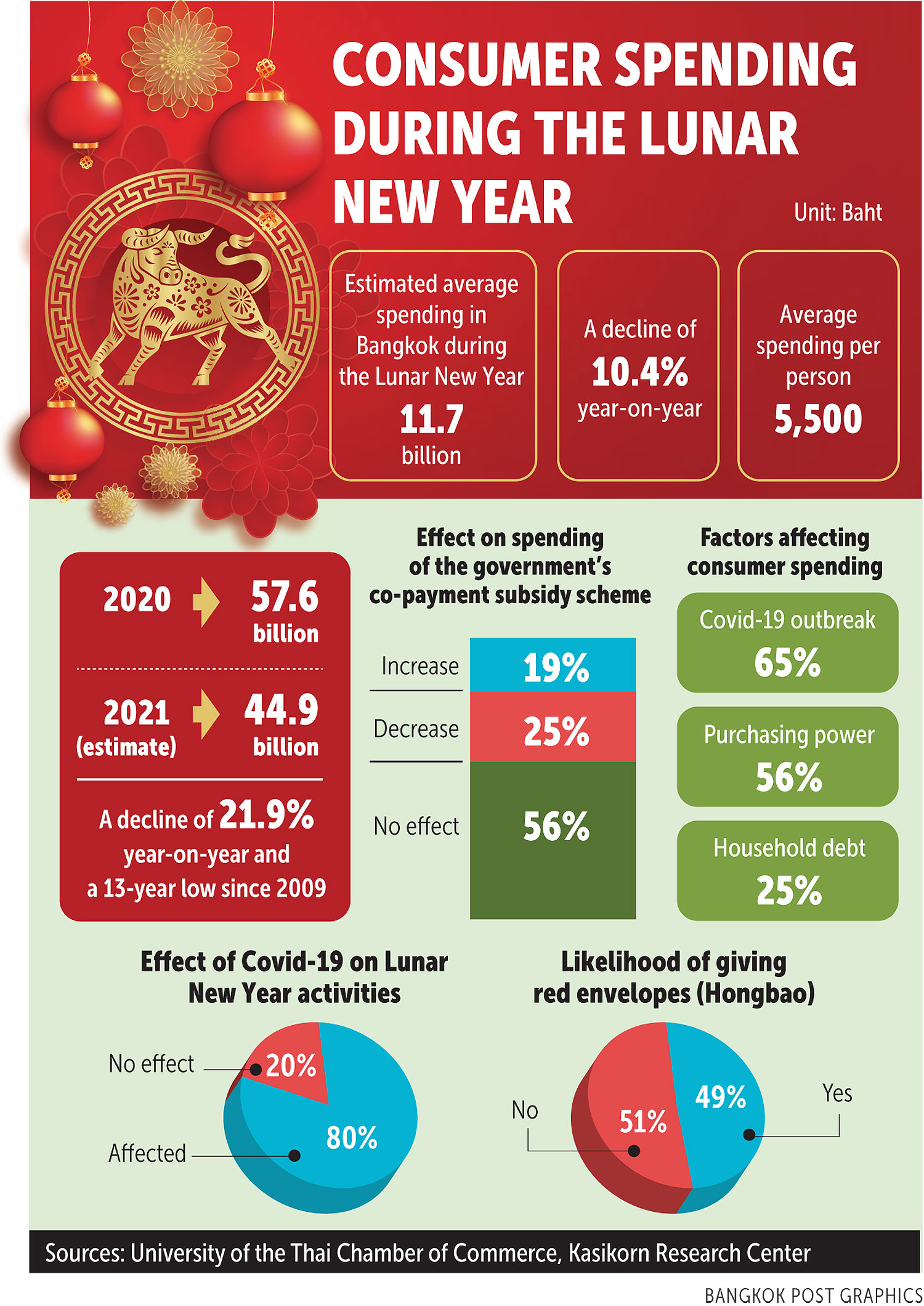 Mr Kalin proposes the government speed up assistance to 1,800 hotels that were not able to access soft loans during the two pandemic outbreaks.

This proposal was made by the Thai Chamber to allow the hotels to keep their businesses afloat and maintain their staff.

Somchai Pornrattanacharoen, president of the Wholesale and Retail Trade Association, said all of the government's economic stimulus packages were helpful in boosting consumer spending, particularly in the provinces.

"Some groups of people use the stimulus measures more frequently. This may build the wrong kind of behaviour among some people, encouraging them to wait around for government support and aid measures forever," said Mr Somchai.

"That could become a burden for the government over the long term."

He still lauded the co-payment subsidy scheme, saying it benefits a wide swath of people.

"I am not sure if the extra long holidays will benefit the tourism business as expected," said Mr Somchai.

He suggests the money would be better spent to hire locals in each province to renovate tourist destinations, making them more attractive and improving facilities. 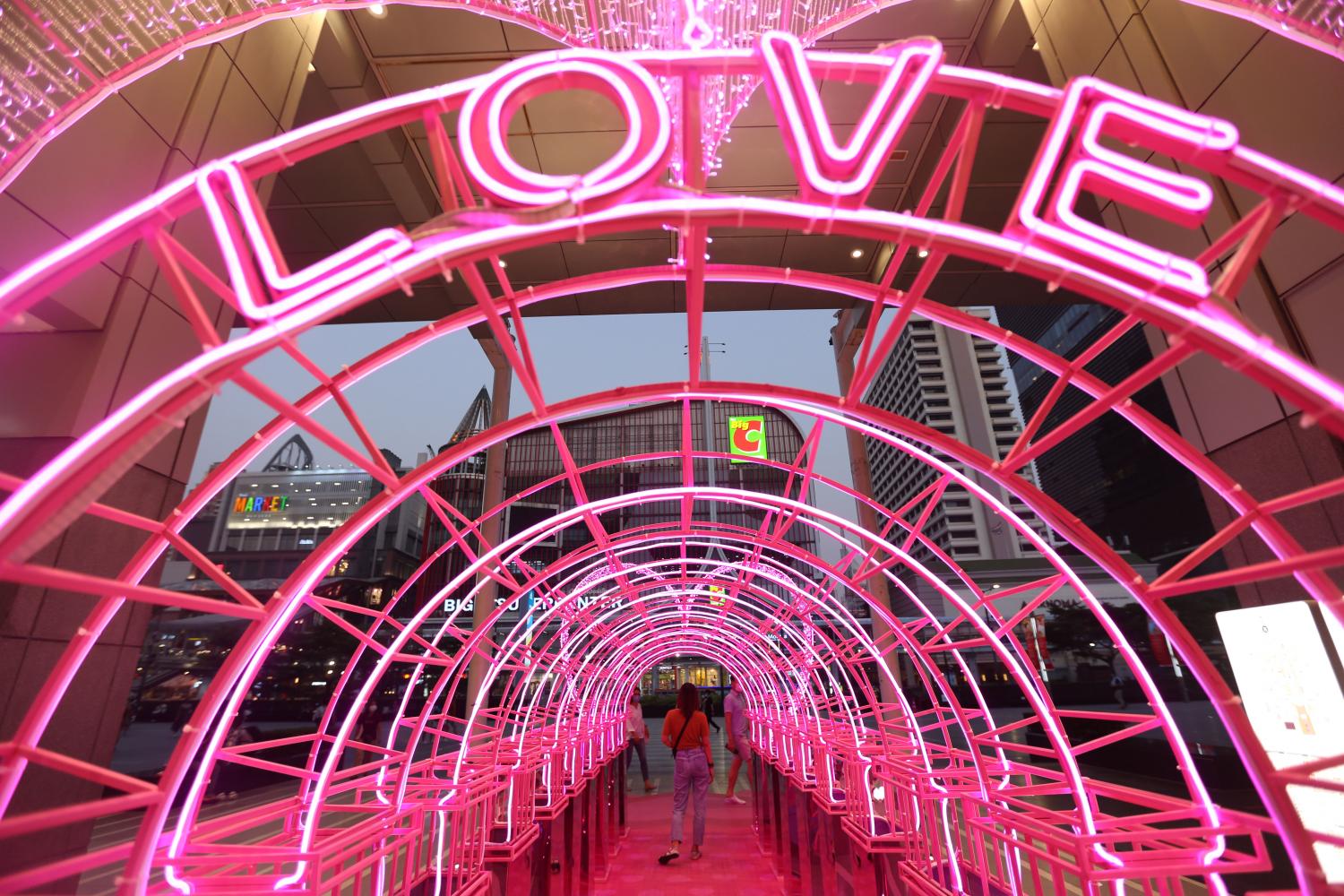 A woman walks through a tunnel of love in front of CentralWorld. Varuth Hirunyatheb

Chamnan Srisawat, president of the Tourism Council of Thailand (TCT), said special holidays are unlikely to spark a revival in the industry as people are not confident and want to keep hold of their savings.

A TCT survey revealed only 61% of Thai tourists are planning trips during the first quarter this year, down from 83% in the fourth quarter of 2020.

Though there are many more government holidays, reported Covid-19 cases are higher on a daily basis than during the first outbreak, dampening travel sentiment. Some 45% of respondents to the survey said they are concerned about health and safety, while 38% said economic stagnancy posed a threat to their travel plans.

Mr Chamnan said the survey, which included 785 tourism operators, also revealed the Rao Tiew Duay Kan stimulus scheme, which partially subsidises the cost of a hotel room and airfare, did not benefit the whole industry because people are concerned about the cost of living.

"About 85% of people said they didn't take part in the campaign because they are short on household income," he said.

Association of Domestic Travel vice-president Chotechuang Soorangura said corporations, which in the past helped support a large number of tourism activities, have shown only a slight improvement this month.

Many tourism businesses have been severely affected by the pandemic, yet they remain open with fewer guests to keep their employees on payroll, he said.

Mr Chotechuang said in addition to lower confidence, domestic tourism has sagged because of unreasonable provincial orders to curb the virus.

"Some provinces face only minor reports of Covid-19 cases, but local governmental bodies still choose to shut down the whole province, which makes things worse for tourism operators, hotels and tourists who had plans to travel," he said.

As the government prepares to roll out the Rao Chana and Rao Rak Kan assistance programmes, some IT distributors believe this could help push up demand for smartphones and IT devices, particularly budget models.

Somchai Sittichaisrichart, managing director of SiS Distribution Thailand, an IT product distributor, said the government's latest schemes are likely to drive up demand for smartphones in the 2,000- to 4,000-baht price bracket, particularly among those who still use feature phones.

"There are 4-5 million people who don't use smartphones. Some may be able to afford smartphones, but just don't want to upgrade," he said.

"This financial assistance could increase this group's interest in buying smartphones."

Vendors who do not have smartphones may want to buy them to register for applications to receive money transfers from consumers who have signed up for these schemes, said Mr Somchai.

Since the pandemic emerged last year, low-end smartphones costing less than 4,000 baht account for 60% of the local market as a consequence of the economic slowdown, he said.

Mr Somchai said the government's schemes should increase spending and speed up the velocity of money.

Takon Niyomthai, head of business development at IT retailer Com7, said the latest government programmes are likely to benefit sales of consumer products and necessities rather than IT items.

However, the assistance schemes mean people will have more money in their wallets and they might want to purchase some IT products, such as a monitor costing around 2,000 baht for their children who are likely to be studying online, he said.