Cryptocurrencies are on the road to becoming mainstream as institutional investors and sizeable industrial companies flock to enter the digital asset market.

The latest sign of growing institutional acceptance for cryptoassets is Elon Musk, founder of SpaceX and Tesla, announcing Tesla's acquisition of US$1.5 billion, or 45 billion baht, of bitcoin, which drove the price to soar last week.

In a company statement, Tesla said the reason for the acquisition is to boost "financial flexibility" and increase speculative profits for the company.

"There will be a development of bitcoin payment systems to support the purchase of Tesla products and services through various trading platforms," Tesla said.

If the system bears fruit, Tesla would become the world's first automaker to accept payments in the cryptocurrency.

This is not the first time institutional players have invested in digital currency.

According to the company's February filing, MicroStrategy holds roughly 71,079 bitcoin.

In addition to financial institutions and companies, educational institutions like Harvard, Yale and Brown universities are also buying cryptocoins on CoinDesk, the exchange reports.

The movements of these big institutions has urged all retail investors to follow suit out of fear of missing out.

Thai retail investors are also alert to the rising hype revolving around bitcoin and other cryptocurrencies.

Thai investors can trade cryptocurrencies on seven local digital exchanges and through seven digital brokers or dealers authorised by the Securities and Exchange Commission (SEC), including foreign digital exchanges.

According to a ranking by Coinmarketcap on Friday, the top global digital exchanges in volume, liquidity and trading volume are Binance, Huobi Global, Coinbase Pro, Kraken and Bifinex.

Trading on foreign exchanges exposes investors to greater fraud risks and they are not under the jurisdiction of the SEC, said the regulator.

According to the Digital Assets Decree, only the seven cryptocurrency exchanges operating in Thailand are regulated and supervised by the SEC, and only investors who open a trading account with them will receive legal protections from the SEC.

Once bitcoin's price surpassed 1 million baht per coin at the end of 2020, the cryptocurrency drew hundreds of thousands of Thai investors into the crypto market.

Surasak Ritthongpitak, director of the Market Supervision Department at the SEC, said the number of cryptocurrency trading accounts rose from 160,000 at the end of 2020 to 470,000 on Feb 1.

Some 50% are owned by investors younger than 30.

He said cryptocurrency prices are highly volatile, moving 100-200% without fundamentals supporting their values like other traditional securities.

If investors are inexperienced, careless or fail to closely monitor their investments on a daily basis, they risk losing much of their money when prices suddenly drop, said Mr Surasak.

In addition to volatility, another risk of crypto trading in Thailand is local digital exchanges' relatively unstable infrastructure, as demonstrated by Bitkub's series of system crashes earlier in January caused by spikes in activity.

The SEC also allows private funds to invest in digital assets, as well as investment advisers to help guide inexperienced investors with cryptocurrencies.

The Revenue Department imposes a 15% income tax on cryptocurrency trading and subjects such investment to a 7% value-added tax as cryptocoins are considered general products, not a currency. 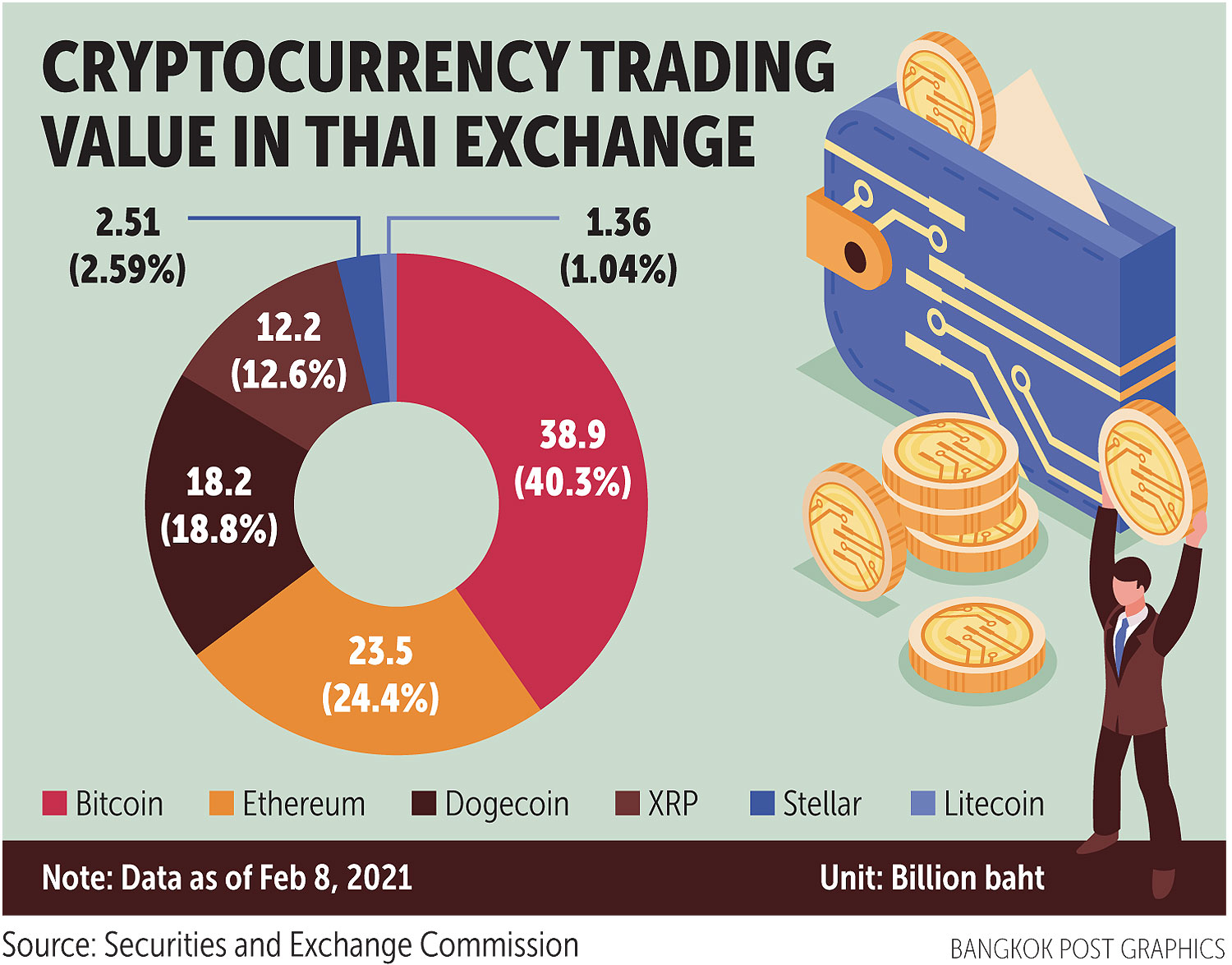 Nuttachart Mekmasin, executive director of research for Trinity Securities, recommends allocating up to 5% of total investment portfolios to cryptocurrencies.

"We recommend adding bitcoin to the portfolio because its relation to other assets such as stocks, debentures and real estate investment trusts is very weak," he said.

"Having bitcoin will truly diversify your portfolio."

For example, if an investor owns a unit of bitcoin priced at 1.2 million baht, when the price surges to 1.4 million, or a price deemed appropriate to rebalance the portfolio, the investor could sell for a profit of 200,000 baht.

When the price corrects, buy bitcoin again at the lower price using the money gained from the portfolio rebalancing, he said.

Although it is hard to speculate on stable returns from bitcoin as it has no intrinsic value, cryptocurrency trading is mostly based on trends, said Mr Nuttachart.

"Digital tokens could be an alternative payment method in the future. I will not rule out the possibility of central banks buying digital currencies as reserves," he said.

"If it happens, this trend will drive global popular currencies such as dollars, euros and even precious metals to decline."

Some digital exchanges also offer about 3-6% returns for investors who deposit bitcoins for the long term, allowing the exchanges to use the deposited bitcoins for further investments, said Mr Palakorn.

The prices of bitcoin and altcoins are surging as investors flock to buy cryptocurrencies as a hedge against inflation caused by an excessive supply of fiat money in the system, he said.

Although most people view trading bitcoin and cryptocurrency as gambling, not investment, all types of investments contain risks, not just cryptoassets.

Many people are comparing the phenomenon to the Thai stock market during 1993-1995, when investors reaped enormous profits from trading before the bubble burst in the 1997-98 financial crisis.

The incident drove many investors to leave the market with a bad taste in their mouth, never to return.

"Do not hurry. Bitcoin and altcoins will remain cheap for a long time after the market crashes, as happened several times in past years," one crypto trader who survived recent price drops told the Bangkok Post.

"Surprisingly, when the market really crashes, no one dares to buy anything." 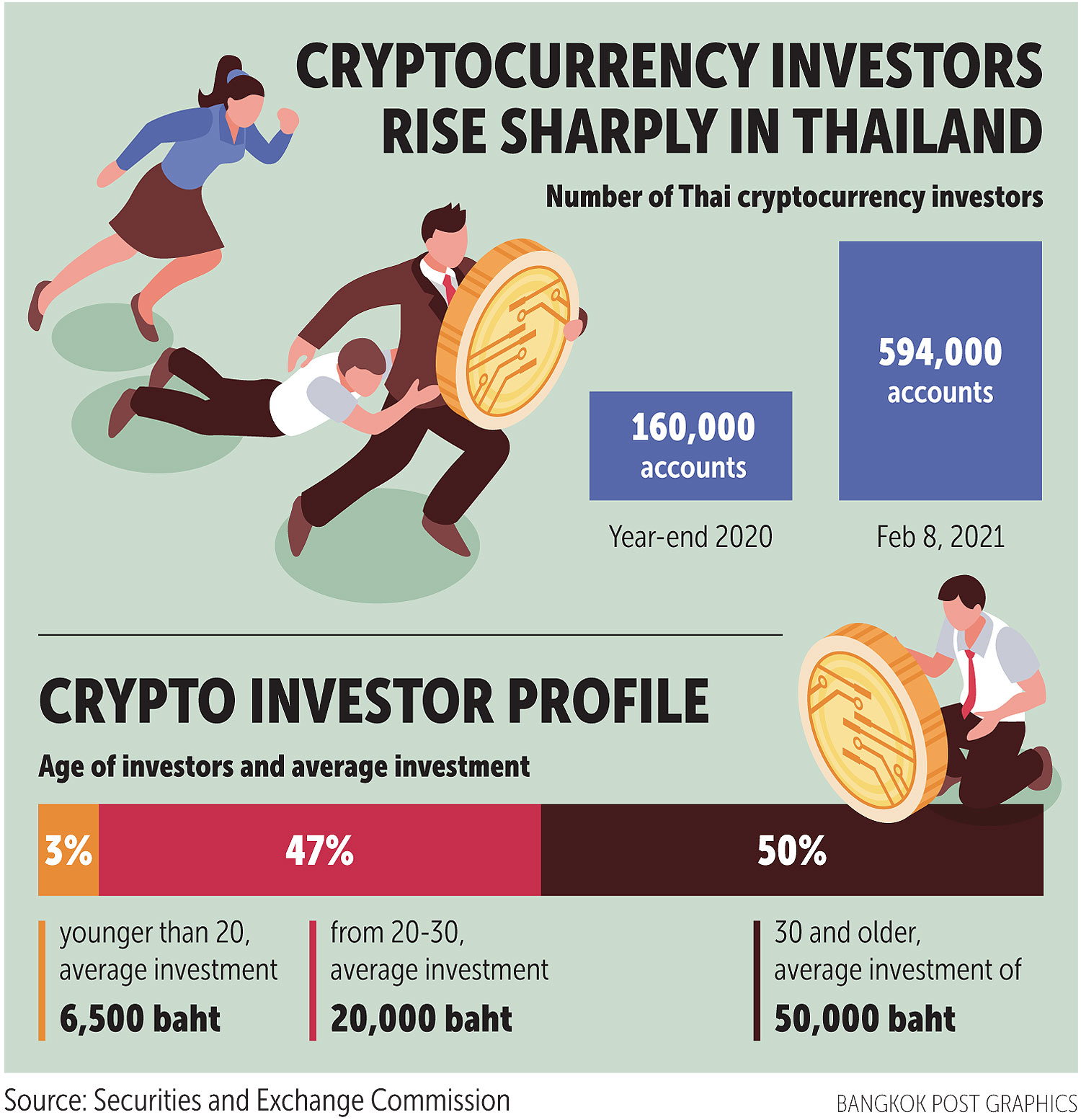 More than 400,000 rai of farmland and residential areas in 8 northeastern provinces along the Chi and Mun river basins are flooded, satellite data shows.