Implementing an asset warehousing concept for the liquidity crunch in the tourism sector makes sense because the industry remains barren, resulting in paltry income. 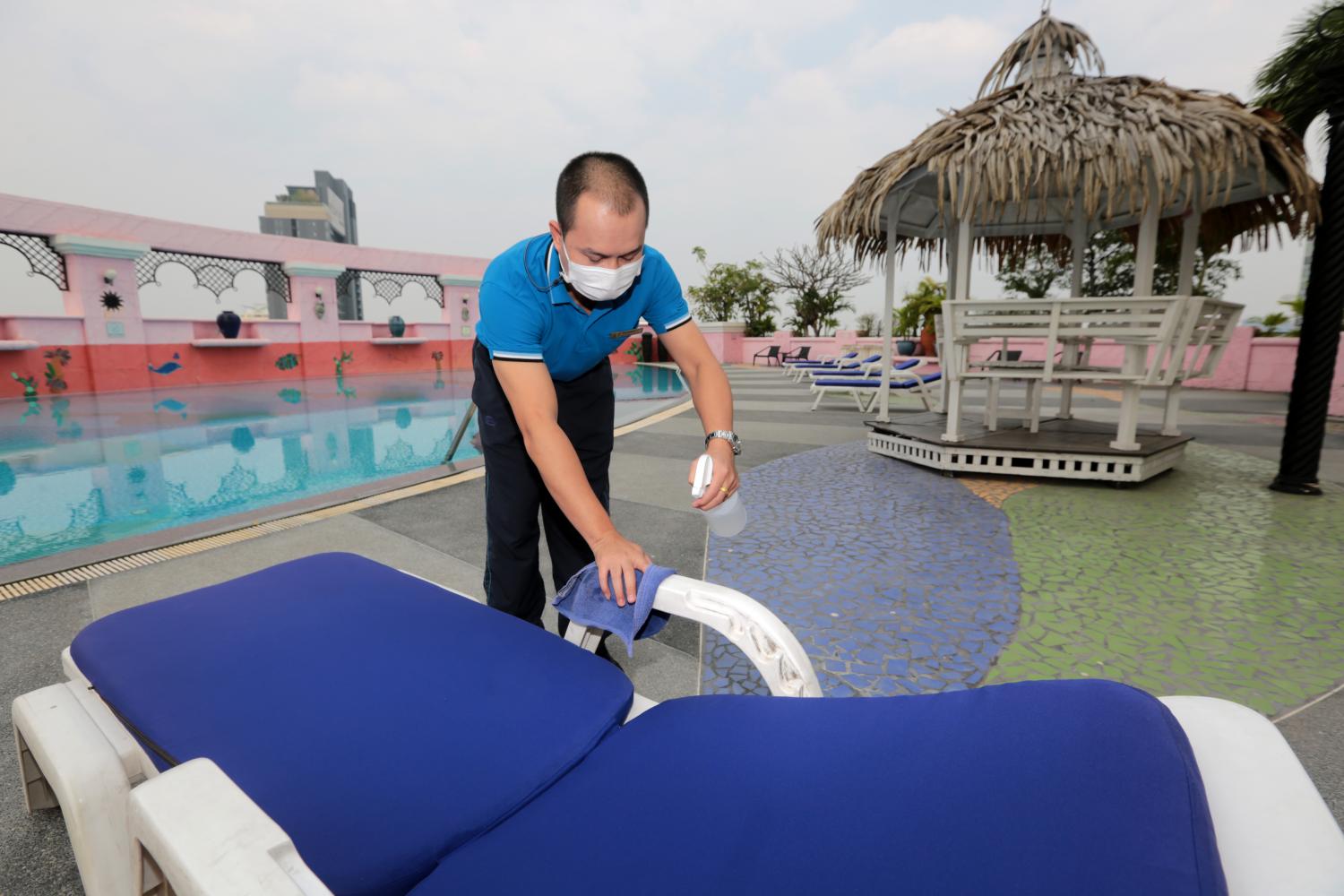 A hotel worker disinfects day beds at an outdoor pool during the Covid-19 outbreak. Chanat Katanyu

The Bank of Thailand and the Finance Ministry have jointly formulated a plan to help these businesses, centred on the idea that the financial burden of principal and interest repayment can be halted.

This is done by transferring or settling collateral assets with financial institutions, which are the creditors. These assets could be rented by business operators, who make a transfer or settlement of collateral assets, with the option of a buy-back contract once operators have overcome the crisis.

No details of the asset warehousing concept have been disclosed by the central bank. However, the idea has started to take shape as financial sources have learned about the proposal, which has yet to gain any formal approval.

The central bank has approved in principle commercial banks setting up a bank-owned asset warehouse to freeze non-performing assets (NPAs) in the hospitality sector, according to a commercial banking industry source.

The NPAs would mostly be classified as property assets, such as hotels and serviced apartments, because the hospitality sector has been especially battered by the pandemic, said the source, who requested anonymity for revealing the proposal.

"The central bank is allowing banks to set up their own [asset] warehouses to manage NPAs, rather than setting up a centralised warehouse. Such an asset warehousing model should shore up confidence for hotel business operators with regard to asset management by their creditors," said the source.

The model would allow both the creditors and borrowers to deliberate asset management conditions under a targeted framework on a case-by-case basis, with oversight provided by regulatory bodies such as the Finance Ministry and the Bank of Thailand.

Business operators who transfer their assets to an asset warehouse and wish to buy them back at a later stage would want to generate liquidity to repurchase the asset, said the source. Soft loans would support borrowers' liquidity requirements.

The government should waive asset transfer fees and corporate income tax liability under the warehousing model to attract both banks and business operators to join this debt solution scheme, said the source. 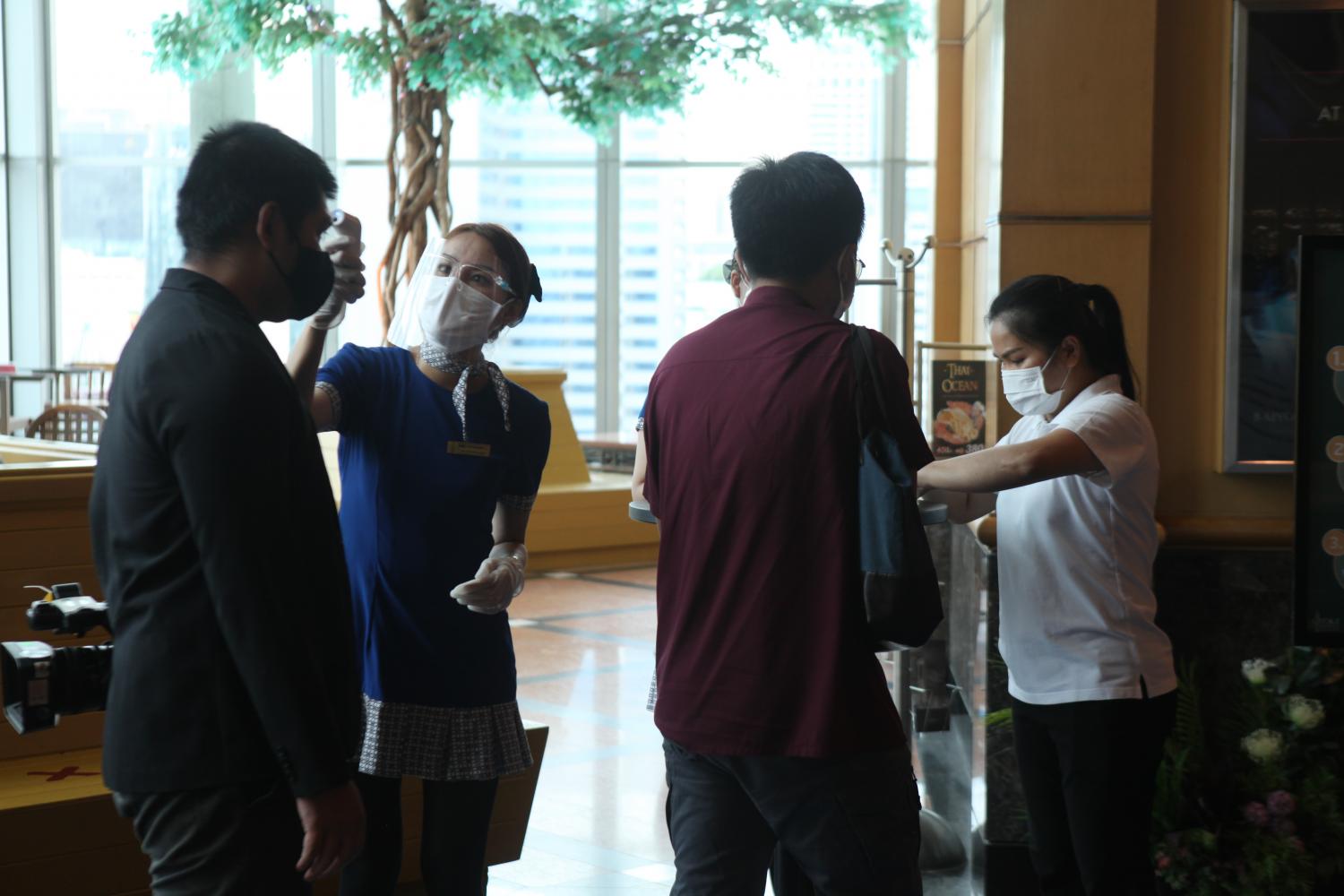 Guests are given temperature checks for Covid-19 in a hotel lobby. Arnun Chonmahatrakool

The government is considering issuing legislation related to the asset warehousing concept and enacting a "super loan" law to bolster liquidity for hotel business operators, said a banking executive speaking on condition of anonymity.

The crux of the plan is to help the hospitality and tourism-related businesses affected by the pandemic crisis through a programme similar to a debt holiday.

For instance, a hotel business that has debt of 15 million baht with another 3 million as interest liability would eventually declare bankruptcy in the current environment because the interest would gradually exceed the principal amount of borrowing.

An asset warehouse scheme sees the government approve the creation of asset management companies to purchase the debts or assets of hotels from banks, who are the creditors, then negotiate with banks to reduce the interest burden, said the source.

These companies would then store the debts and assets in a so-called "warehouse" designed to store performing assets, allowing hotel business operators to rent these assets to continue business operations, said the source.

When the economy recovers in 3-5 years, hotel operators can buy the asset back from asset management companies. These operators would not shoulder principal and interest repayment liabilities for those 3-5 years, hopefully amassing enough liquidity to run their businesses until the country reopens to foreign tourist arrivals.

Some hotel operators might not be able to purchase all the assets under this plan, hence a scheme could be devised to convert debt into equities, such as a 60% debt-to-equity conversion for instance, said the source.

Regarding the passage of a super loan law, this would be a crisis management loan for borrowers in the special mention loan category, with interest rates based on market rates as opposed to the 2% interest ceiling of the existing soft loan decree, said the source.

Kanit Umsakul, an analyst at Krungthai Compass, a research house under Krungthai Bank, said the government is expected to implement the asset warehousing scheme around late March to early April, in line with the expiration of the Bank of Thailand's targeted debt moratorium measures for small and medium-sized enterprises (SMEs) in June.

The asset warehousing concept would require legal amendments and cabinet approval before coming into effect.

"An asset warehouse is an initiative tool, with Thailand likely the first country to adopt such an NPA management solution. Hopefully it will help contain the bad debts of tourism-related businesses, especially hotels, allowing them to overcome the crisis gradually over the next 3-5 years in accordance with the asset freeze period," said Mr Kanit.

Foreign tourist arrivals neared 40 million in 2019, and an average hotel occupancy rate of 30-40% with such volume can allow operators to break even, he said.

With the pandemic continuing unabated, the National Economic and Social Development Council forecasts foreign arrivals to tally only 3.2 million in 2021. Under this scenario, the hospitality sector would face hefty losses, said Krungthai Compass.

Total outstanding loans for hotels in the commercial banking sector logged 430 billion baht in the third quarter of 2020, of which 4.4% were classified as non-performing loans (NPLs), said the research house. The NPL ratio in the hospitality sector increased from 3.7% in the first quarter to 3.8% in the second quarter.

The Bank of Thailand is preparing to propose an amendment to the 500-billion-baht soft loan decree, aiming to use a portion of the leftover loan amount to help tourism business operators reeling from lethargic economic conditions, said a Finance Ministry source who spoke on condition of anonymity.

Funding for the asset warehousing scheme would derive from an amendment made to the soft loan decree, said the source.

The amendment would have the asset warehousing programme included in an order for the central bank to be able to disburse funds from the soft loan decree to commercial banks. Commercial banks would then use the money to purchase businesses that SMEs want to sell to generate liquidity.

The Bank of Thailand's board is expected to hold a meeting later this month at which the soft loan decree amendment is slated for approval, said the source.

Collateral assets used in the transfer or settlement process with banks under the asset warehousing programme should not be classified as NPAs prior to the Covid-19 pandemic crisis, said the source.

Effective since April 2020, the 500-billion-baht soft loan decree has underperformed, with a disbursement rate lower than expected.

Some 126 billion baht worth of soft loans have been disbursed to 74,800 SMEs as of Feb 8, according to Bank of Thailand data. The average loan approval sum was registered at 1.7 million baht per business.

The central bank has offered 500 billion baht in soft loans at 0.01% interest to financial institutions for two years to relend to SMEs, with a maximum credit line of 500 million baht at 2% interest.

But the soft loan programme has been marred by criticism related to the subpar disbursement rate.

Critics said the 2% interest ceiling for financial institutions should be raised to encourage banks to provide loans to SMEs, as banks' financial costs already exceed 2%.

Another hindrance is a condition stipulating banks only provide soft loans to their own customer base, with the maximum drawdown for the soft loans at 20% of each bank's outstanding loans as of year-end 2019.

AS SOON AS POSSIBLE

Hotel owners embrace the asset warehousing concept as the "frozen period" will lift a massive debt burden and allow operations to run more smoothly over the next 1-2 years, said Marisa Sukosol Nunbhakdi, president of the Thai Hotels Association (THA).

She said the ongoing low-interest loan programme sponsored by the government has not helped most business operators as it should have. Only 25% of hotels nationwide can secure loans from this scheme.

However, the asset warehousing measure still has a weakness that needs to be fixed, said Mrs Marisa. Some SME operators are without collateral, such as tour operators, and they might be left behind in such a scheme. These operators need the state-owned Thai Credit Guarantee Corporation to provide loan guarantees to access loans, she said.

Mrs Marisa said a number of internationally branded hotels in Thailand have switched to hibernation mode during the crisis to stop burning cash.

The THA found 10-20% of hotels nationwide are being offered for sale as owners struggle to pay existing debts accumulated since before the pandemic, with losses mounting during the two outbreaks in Thailand.

"Three-star hotels have registered the highest level of permanent closures. Compact operations allowed them to negotiate and appropriately compensate workers more easily. But mid-sized and large hotels have to think twice as many employees would be affected," she said. "If the government can implement the asset warehousing measure, it will also benefit workers in those hotels."

Vichit Prakobgosol, president of the Association of Thai Travel Agents, said the asset warehousing idea benefits only hotels and restaurants that have assets eligible for the scheme. If tour operators have assets such as land plots, most have already been sold or mortgaged to cover increased debts.

To allow more tour operators to join the asset warehousing scheme, the government should widen the requirements for types of assets such as houses, vans or tour buses, said Mr Vichit.

Operators would also like the government to reopen borders to the international market and restart the tourism industry, rather than waiting to access financial aid, he said.

Kalin Sarasin, chairman of the Thai Chamber of Commerce (TCC), said the chamber agrees with the proposed asset warehousing concept because it should allow operators of hard-hit hotels and restaurants to have a lifeline to continue their businesses.

"The government should roll out the asset warehousing concept as soon as possible because many business operators are reeling from serious financial difficulties, with some about to shut down or sell their hotels or businesses," said Mr Kalin.

The Federation of Thai Industries (FTI) believes asset warehousing can be a way out of huge debt pressures if the government adopts it at the right time, with a debt relief condition needed in the measure.

"Bankers should cut the principal first, then interest, not the other way around as done under normal practices," said Mr Supant.