Belle of the ball
Business

Belle of the ball

While the Eastern Economic Corridor snatches most of the headlines, economic development zones in other parts of the country struggle to develop action plans

The Industrial Estate Authority of Thailand's Smart Park is also located in the EEC.

The government's touted Eastern Economic Corridor (EEC) seems to be the only flagship economic development project Thailand has initiated in recent years, with little to no follow-up on similar projects.

The government agreed in early 2019 to approve regional development plans worth a combined 94.4 billion baht. The largest portion of the budget would be allocated for six regions, consisting of the central, northeastern, northern, southern, eastern and three southernmost provinces.

The NEC, NEEC and Southern Economic Corridor are mentioned in passing by authorities, but their progress seems glacial when compared with the EEC.

The NEC, NEEC and Southern Economic Corridor are not shelved, but they are moving ahead at a snail's pace, facing several obstacles, said an industry official familiar with the schemes who requested anonymity.

He blamed the slowdown on the lack of a "real" host agency to oversee the projects and serve as a focal point of coordination.

There are also no concrete details, action plans or even a clear framework, though the government told provincial officials to come up with ideas to set up economic development zones, said the official.

"City planning is also a hindrance for land development as factory construction is not allowed in some areas and local officials disagree on certain concepts of the schemes," he said.

Some projects such as the Southern Economic Corridor require a feasibility study that may last 2-3 years, said the official. 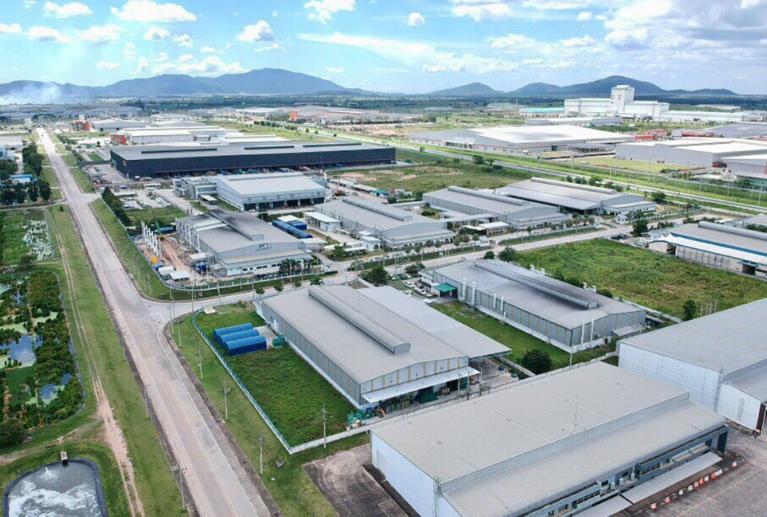 Industry Minister Suriya Jungrungreangkit was not available for comment.

Earlier this month, the cabinet approved a three-year extension of investment privileges for the Southern Economic Corridor until December 2023.

The scheme aims to economically link countries ringing the Indian Ocean -- India, Sri Lanka and Bangladesh -- with the Gulf of Thailand and the Andaman Sea. The government also wants to connect the southern corridor with the EEC.

Chumphon, Ranong, Surat Thani and Nakhon Si Thammarat provinces would be grouped together to form a new economic zone providing access to the sea and the upper southern region of Thailand.

The southern corridor's development framework consists of four components: a western gateway for trade; a gateway for Gulf of Thailand and Andaman Sea tourism; bio-based and processed agricultural product industries; and ecological and cultural conservation.

As the government puts it, the corridor is meant to be another economic window for the country, serving as a "land bridge" between the Gulf of Thailand and the Andaman Sea.

Implementing such a corridor is proving to be an uphill task as residents in Songkhla dislike the scheme. Many villagers have protested against it, arguing it would bring a heavy industry component to a district in Chana based on fisheries and farm products.

The northern corridor focuses on attracting tourism through its Creative Lanna Cluster, covering the four provinces and promoting Lanna heritage, which refers to the unique culture in the North.

Kanchanaburi municipality is part of the Central-Western Economic Corridor meant for the development of agro- and high-tech industries as well as heritage and green tourism.

The corridor in the Northeast seems to have the least headlines of all the economic development zones.

NESDC secretary-general Danucha Pichayanan insisted regional developments will move ahead and most projects are undergoing a feasibility study.

The NEEC in the Northeast has been designated a bioeconomy cluster, geared towards developing high-quality processed agricultural goods and growing premium jasmine rice.

The bioeconomy cluster includes the provinces of Khon Kaen, Nakhon Ratchasima and Ubon Ratchathani. These provinces are to concentrate on transforming raw materials into high-value goods. 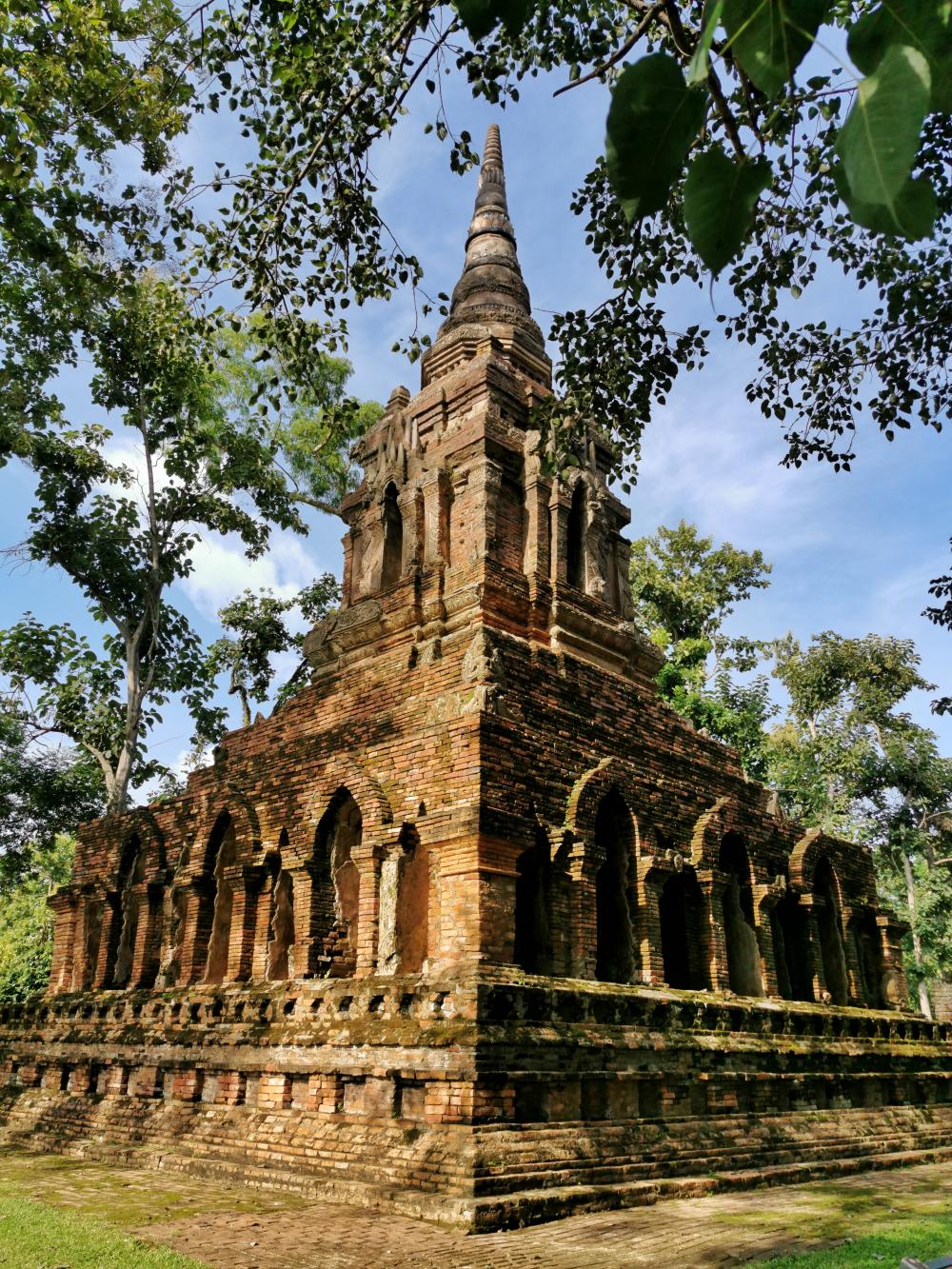 The EEC, on the other hand, has received constant government support and remains part of the government economic development backbone.

"The EEC is known all over the world because of frequent roadshows to promote the scheme, as the Southeast Asian economy is rapidly growing," said Kriengkrai Thiennukul, vice-chairman of the Federation of Thai Industries.

"The EEC is presented as the country's mega-investment project, which attracts the attention of investors."

The project spans 30,000 rai in Chachoengsao, Chon Buri and Rayong provinces and is set to become Thailand's high-tech industrial hub.

The government also wants to connect the EEC with China's Belt and Road Initiative (BRI) and the Regional Comprehensive Economic Partnership (RCEP) to further expand Thai and Asean economies.

Before the pandemic, the Thai government forecast the EEC could boost the country's GDP growth to 5% a year, creating more than 100,000 jobs and generating income exceeding 450 billion baht annually.

Infrastructure development projects in the EEC are in place, while roadshows to China, Japan and Vietnam aim to attract investors, Mr Suriya said earlier.

Up to 6,000 rai of land in Rayong and Chon Buri serve as new industrial estates for the EEC, he said.

The EEC Office aims to attract 300 billion baht in investment applications this year. Deputy Prime Minister Supattanapong Punmeechaow, who chaired a subcommittee meeting on EEC policy earlier this month, said the government is ready to come up with proactive approaches to achieve this target. 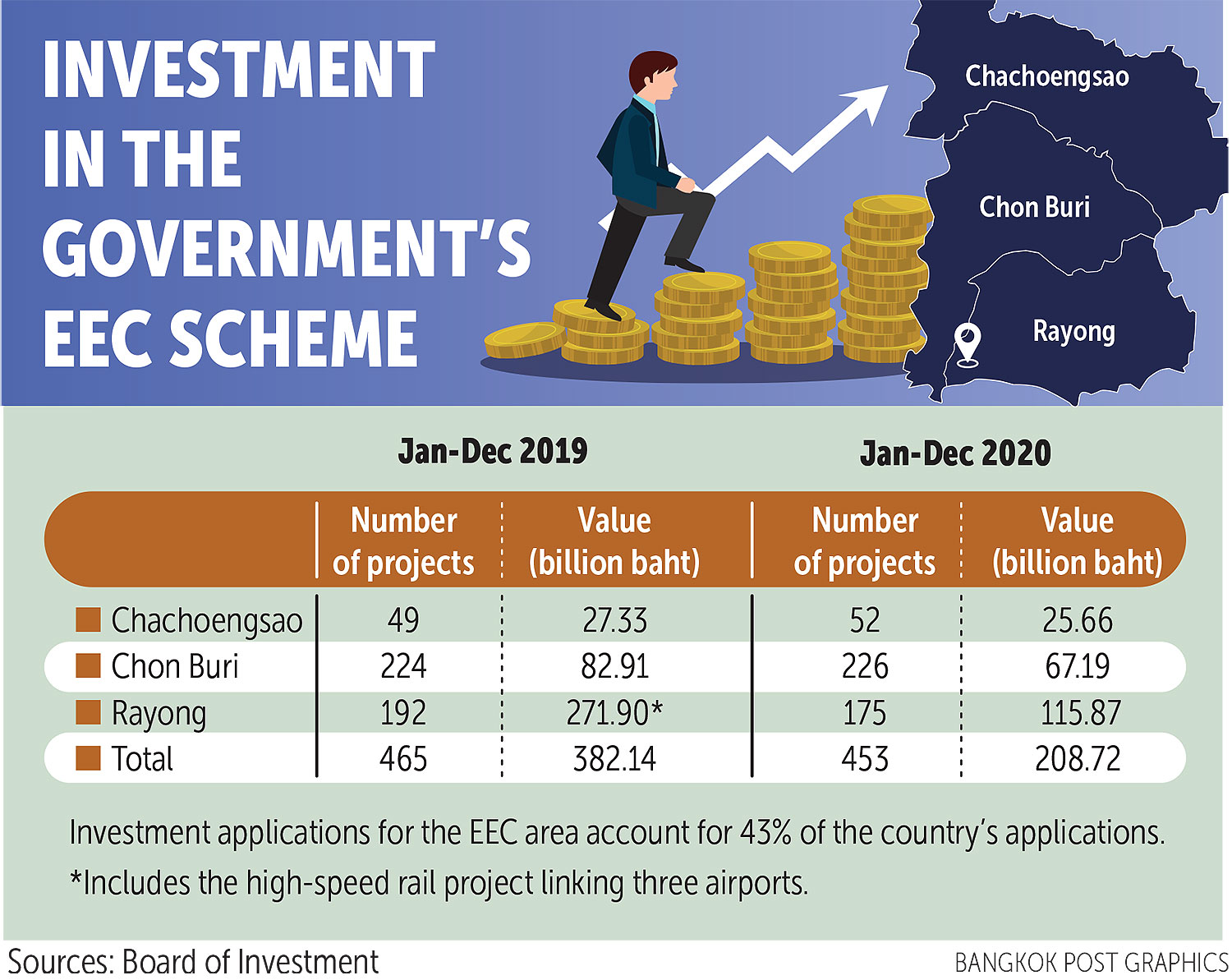 In addition to the EEC's promise, the NEC, NEEC and southern corridor are also crucial to help Thailand expand trade and investment, especially during the post-pandemic period, said Mr Kriengkrai.

"The government should use all the economic tools at its disposal to strengthen the Thai economy," he said.

As the ongoing political unrest in Myanmar looks set to affect its economy, foreign investors are likely to focus more on Thailand and Vietnam, said Mr Kriengkrai.

This could help investment at the EEC, as well as the NEC, NEEC and southern corridor, he said.

"I believe the government will push these projects ahead, though they are not heavily publicised like the EEC, making their progress appear passive," said Mr Kriengkrai.