All eyes on next NBTC board
Business

All eyes on next NBTC board

Another recruitment delay could jeopardise plans put forward by the regulator

The new round of recruitment for the NBTC board kicks off this month as the agency risks a delay in its 2021 agenda. (Photo by Kitja Apichonrojarek)

With the new round of recruitment for the National Broadcasting and Telecommunications Commission (NBTC) board scheduled for this month, players in the telecom, broadcasting and innovation industries are monitoring the process as another derailment -- three times in three years -- could jeopardise previous plans put forward by the regulator.

The first delay took place in 2018 when senators voted against the proposed candidates, recruited in line with the 2017 NBTC law.

The second recruitment round was discontinued when the NBTC Amendment Act, which touches upon the NBTC board selection process, was published in the Royal Gazette on March 1. In this second round, 14 shortlisted candidates vying for seven board posts had been selected.

The act stipulates the new recruitment process must start within 15 days after the legislation comes into effect -- a day after the law is published in the Royal Gazette. 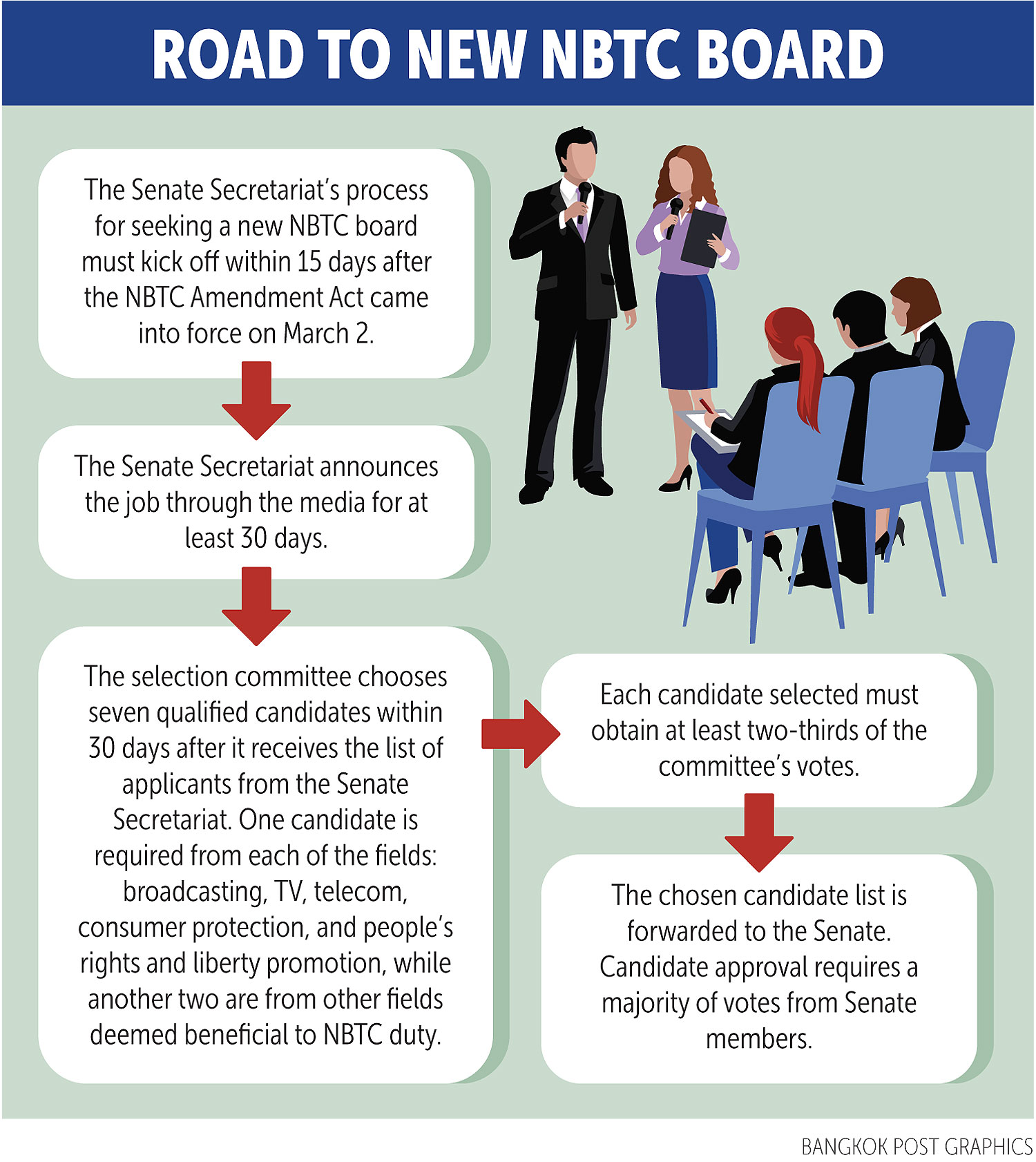 Under the amended act, the NBTC consists of seven members -- one each from telecom, broadcasting, TV, consumer protection, people's liberty and rights promotion backgrounds, and another two from other sectors deemed beneficial to the duty of the agency.

This differs from the 2017 NBTC Act, which allocated seven members, with one each from telecom, broadcasting, TV, law, consumer protection, engineering and economic backgrounds.

The amended act offers methods for the Senate Secretariat's committee responsible for selecting NBTC board members to pick seven candidates and forward the names to the Senate for approval.

This shortens the process from the 2017 NBTC Act, in which 14 shortlisted candidates are chosen by the selection committee first and then forwarded to the Senate to pick seven of them.

Suebsak Suebpakdee, executive director of the Telecommunications Association of Thailand, said he agreed with the more flexible terms of the amendment, particularly regarding members' backgrounds.

As the requirements for board members' backgrounds are more open, this provides a chance for more candidates to compete and gives the selection committee more choices to consider, including those more suited to innovation and digital spheres for the future, he said.

"A strict seven fields may not match future innovation adoption, which may require the decisions and vision of those with a broad range of knowledge and skills," said Mr Suebsak. 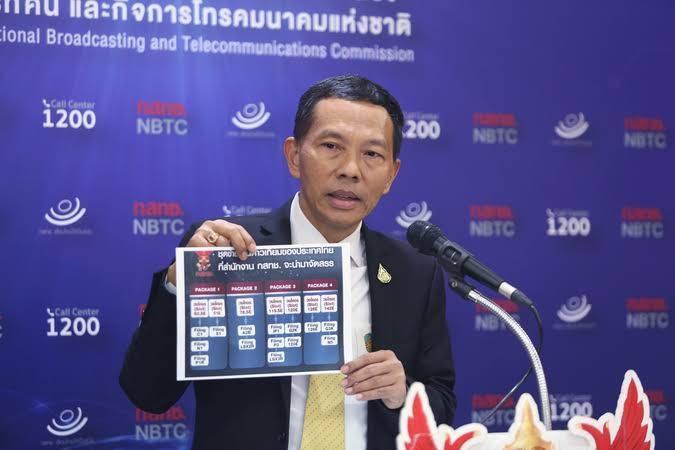 AM Thanapant displays the satellite orbital slots put up for auction. The original plan to hold the auction in March this year was derailed.

Mr Suebsak said the selection committee may have a tough job in deciding how to select applicants for the two board seats labelled "beneficial to the NBTC's duty".

These choices are likely to face criticism, but the body must have clear practices and transparency to earn public acceptance, he said.

"Some conditions in the amendment are better than the 2017 law, but could be more complicated in practice," said Mr Suebsak.

Pisut Ngamvijitvong, senior director of analysis at Kasikorn Securities (KS), said he does not know whether the new recruitment round will be successful, but the new board should be quickly nominated to end the decision-making vacuum at the NBTC.

The new NBTC board faces a variety of pressing issues, including seeking a balance of benefits between old media and over-the-top platforms.

It could take 2-3 months before the new board takes office, he said. It is likely the planned auction of the 3500-megahertz spectrum range will be deferred from this year to 2022, said Mr Pisut.

Supant Mongkolsuthree, chairman of the Federation of Thai Industries, said his organisation wants to see a new NBTC board as soon as possible because the board is crucial in pushing innovation and technology forward.

Suchatvee Suwansawat, rector of King Mongkut's Institute of Technology Ladkrabang, said the new board should not only have the knowledge and skills to shape a regulatory framework, but also should serve as designers for telecom and broadcasting in the future.

"The new economy requires all sectors to have human resources skilled in digital fields," he said.

A regulator with "designer" features could come up with regulations that can add more value to the business sector and boost the country's competitiveness, said Mr Suchatvee. 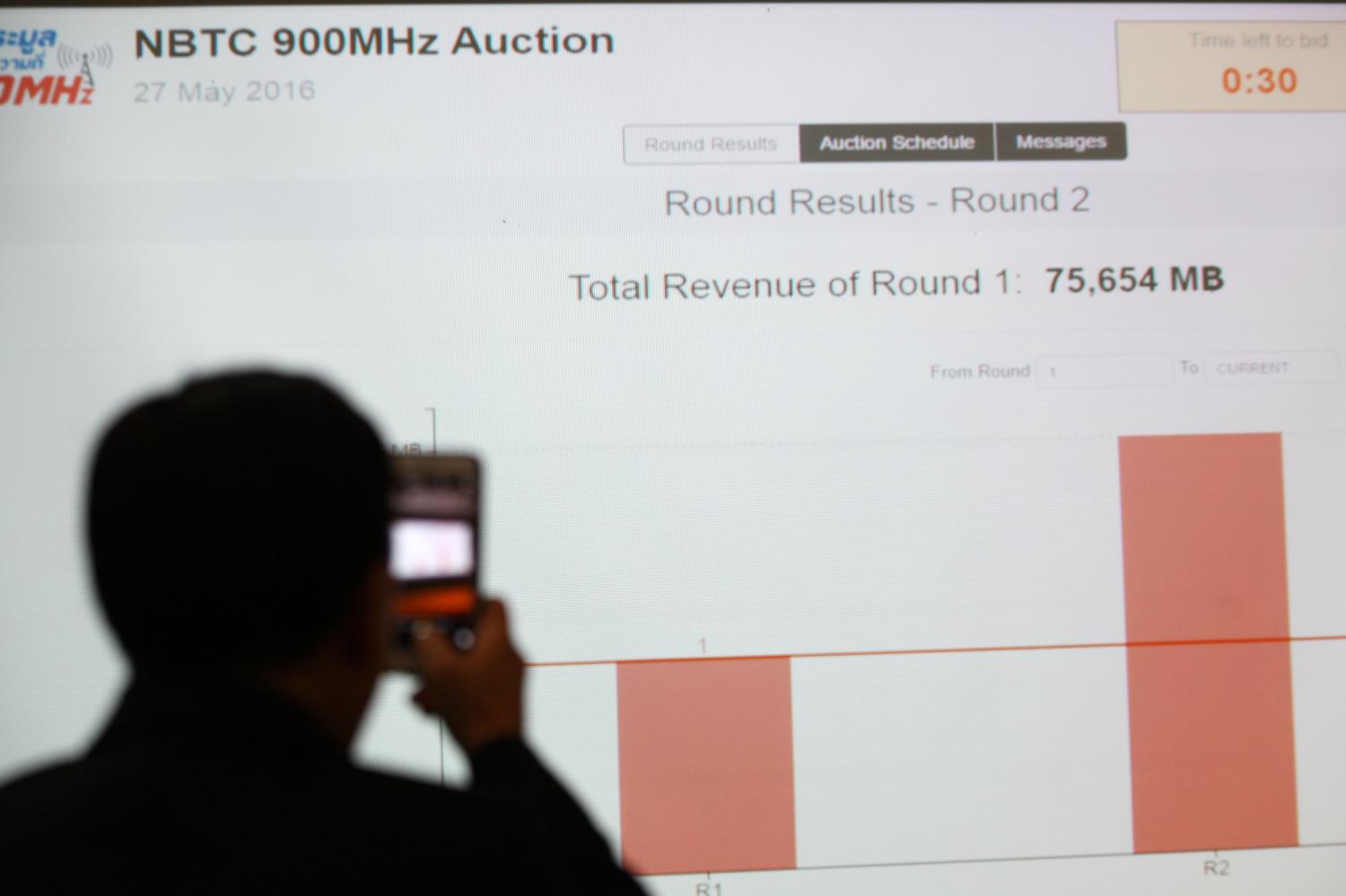 A man takes a photo of the 900MHz spectrum auction result in 2016. The auction of 3500MHz -- the most wanted range for 5G services among carriers -- remains unclear as to when it will be held amid various pressing issues, including determining the compensation figures for those affected by spectrum recall. Photo: Seksan Rojjanametakul

The lack of a functioning board puts two NBTC priorities for this year at risk, according to industry observers.

One concerns the auction of rights to use satellite orbital slots. The original plan to hold the auction in March has faltered.

The auction draft requires amendment and approval by the NBTC board.

Some have questioned whether the incumbent board would dare make decisions on the matter while the recruitment of a new board is ongoing.

The delay could take a toll on the country if the slots are not used for the benefit of the space economy, said NBTC deputy secretary-general Air Marshal Thanapant Raicharoen.

The period for orbital slots to remain dormant is limited under the International Telecommunication Union.

Another NBTC priority is the auction of the 3500MHz spectrum licences as a second batch for 5G. The first batch comprised the 2600MHz, 700MHz and 26-gigahertz ranges at an auction in February, 2020.

The regulator has other pressing tasks ahead, including determining compensation for the frequency recall and the impact of the recall on satellite TV viewers and corporate clients of satellite service provider Thaicom, which uses the range. 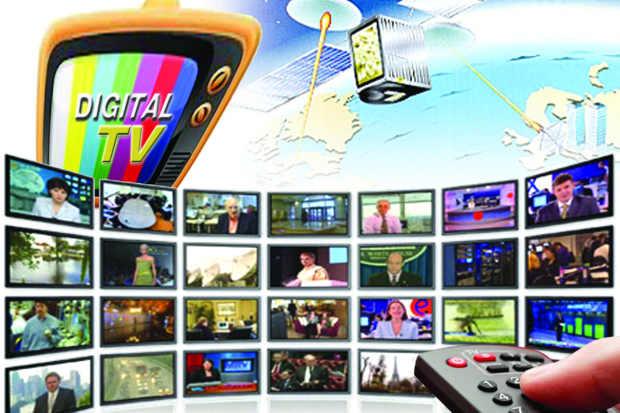 Digital TV is another key industry overseen by the NBTC.

An NBTC management source who requested anonymity conceded it would be difficult to hold the 3500MHz range auction before Thaicom's concession expires.

"More importantly, the existing NBTC board is unlikely to approve any key issues with the recruitment of new board members already underway," the source said.

Mr Pisut of KS said 2022 is not too late for the auction because 5G adoption is happening gradually, partly due to the pandemic as well as the economic slowdown.

The top two mobile operators -- Advanced Info Service (AIS) and True Move H Universal Communication (TUC) -- may not be too keen to acquire the 3500MHz range now as the former won 100MHz of bandwidth on the 2600MHz range at last year's auction, and the latter acquired another 90MHz on the same range, he said.

Each of them expects 5G subscribers to reach 1 million by the end of 2021, or 100,000 new 5G users per month, and the two may not be eager to bid on more spectrum licences this year or even next year, Mr Pisut said.

KS expects carriers to gain proper returns from the 5G ecosystem in the next few years, particularly 5G usage in vertical industries as well as other business use cases. 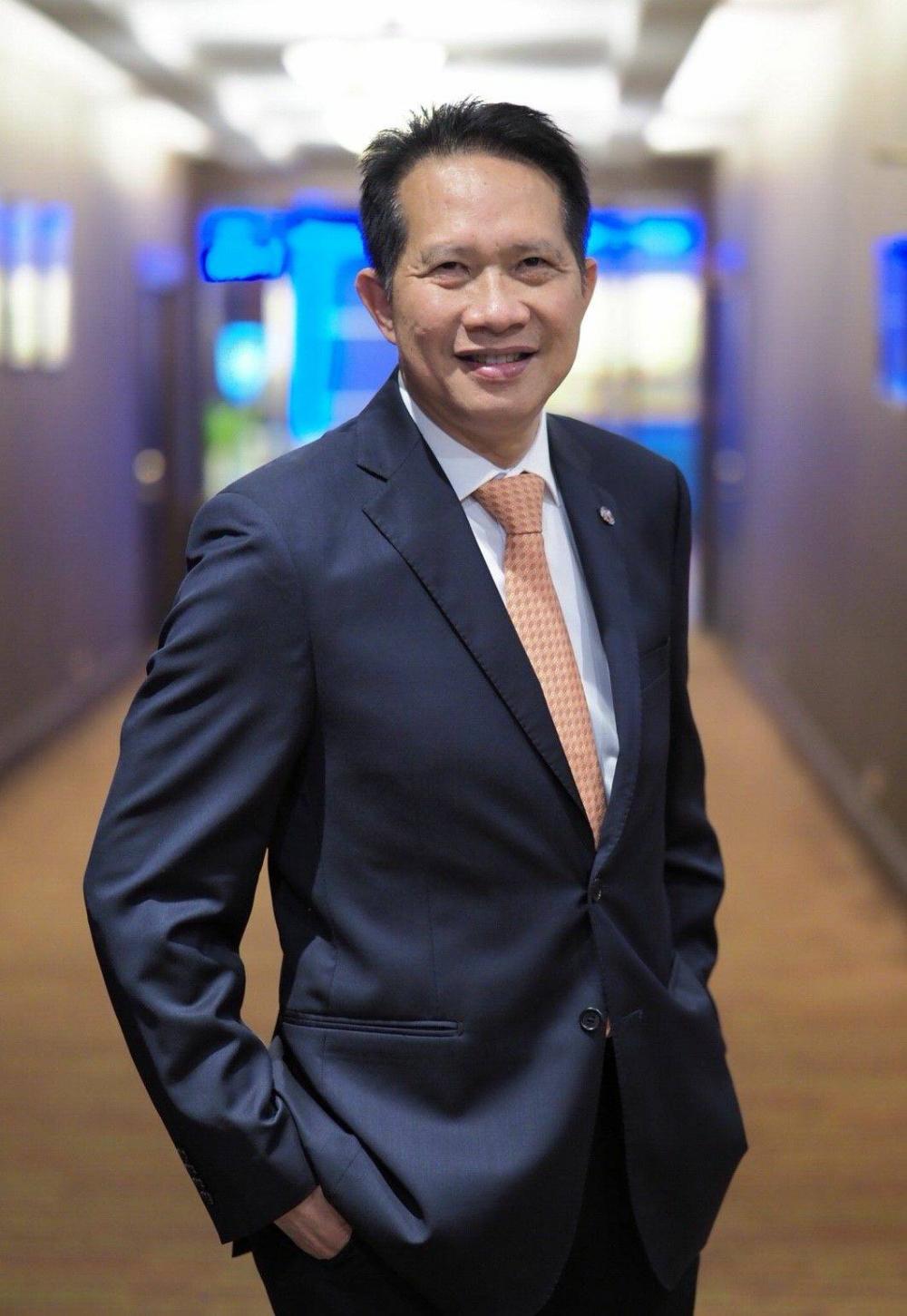 Mr Supant says FTI wants to see the NBTC board quickly formed as the regulator plays a immense role in helping push innovation and technology forward.