Uncertainty for the elderly
Business

Uncertainty for the elderly

Thailand's trajectory sees it becoming a "super-aged" society in 2031, where those aged 60 and over make up 28% of the population.

These demographics present great challenges for policymakers and demand an urgency in planning.

Various studies have revealed Thailand is relatively low in the rankings for savings worldwide, with a study conducted by Thailand Development Research Institute (TDRI) in 2019 showing middle-income people in urban areas need to have savings of about 4.3 million baht per household to ensure they have sufficient cash to spend upon reaching the retirement age of 60.

The elderly in remote areas are estimated to need 2.8 million baht.

Given such figures, there are serious doubts about how many Thai families can afford to retire given insufficient savings. 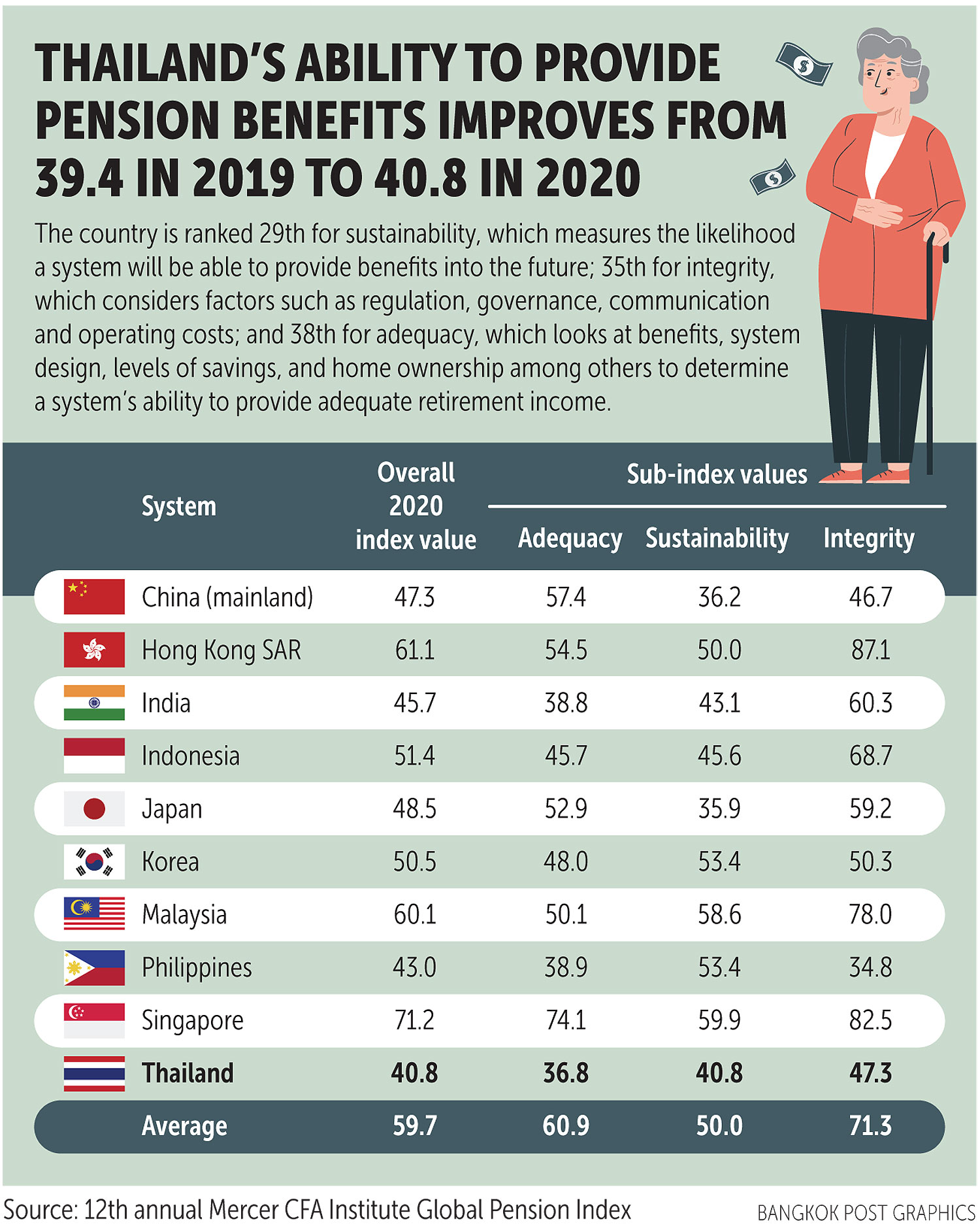 The socioeconomic survey of Thai households in 2019 by TDRI found only 120,000 families in Thailand had an income of more than 2.8 million baht -- 0.5% of total households.

According to the NESDC's report, among 37.9 million members of the Thai workforce in 2020, 17.5 million had social security plans, including a pension fund, provident fund or social security fund as required by Sections 33 and 39 of the Social Security Act.

The remaining 20.4 million were labourers participating in voluntary savings plans including the National Savings Fund (NSF), a voluntary pension fund for self-employed workers.

According to Ms Jinanggoon, the NESDC found Thais start saving at age 42 on average, compared with 30 in the US.

Household investment in 2019 made up only 2.2% of total households in the country, while one-third of Thai workers were in the farm sector, which fetches low income and has low productivity, she said.

"Even worse, Gen Y Thais like to purchase luxury items that take up to 69% of their salaries, which average 100,000 baht a month. These are mainly mobile phones, clothes, cosmetics, electronic equipment, watches and ornaments. Total purchases made by Gen Y amounted to 1.37 trillion baht a year, or about 13% of the GDP. Some 70% of purchases are financed by bank loans, credit cards and cash cards," said Ms Jinanggoon.

"This indicates young people lack proper savings and financial planning because they overspend. The government must step up in promoting savings and improve savings-related regulations to build financial security."

She said the growing number of aged people will add a burden for the workforce, forcing them to care for their elders as well as their children.

"Once Thailand becomes a full-fledged aged society, while the fertility rate remains relatively low, a labour shortage may occur. This would cause a slowdown in long-term economic growth because of low consumption and higher medical expenses for the elderly," said Ms Jinanggoon, citing a NESDC study from 2019 showing government spending on healthcare for the elderly is estimated to reach 554 billion baht in 2040, up from 406 billion in 2017.

Revenue from income tax collection is projected to fall substantially, possibly adding risk to the country's fiscal discipline in the long run.

"Thailand is approaching becoming a full-fledged aged society while still stuck in the middle-income trap. In 2020, the average age of Thais was estimated at 40.1 years old, ranking as the oldest among Asia's emerging economies," the research said.

"Given this scenario, the impact on structural problems will deepen, especially for domestic consumption and investment. The government will definitely face a higher fiscal burden due to rising welfare spending."

The old-age dependency ratio is the ratio of the number of elderly people at an age when they are generally economically inactive, compared with the number of people of working age.

"Given the changing demographic structure, the greying population trend is expected to affect economic growth in all dimensions," said KKP.

As a result, Thailand needs structural economic reform to sustain the growth rate in the long run, said the research.

Innovative technology and development are necessary to replace human labour. Improving productivity and competitiveness via the creative economy and high value-added products are key solutions, the report recommended.

The government should also support legal amendments to promote cross-border labour movement and evolve from labour-intensive industries to technology and automation.

The government should facilitate ease of doing business by encouraging productivity and competitiveness in the private sector, the report found. Tanit Sorat, vice-chairman of the Confederation of Thai Trade and Industry, predicted more older workers may lose their job, dealing a further blow to unemployment during the pandemic.

Workers over age 50 are likely to be offered early retirement as their employers are more concerned about costs in an economic slump.

"The longer they work with companies, the higher their salaries," said Mr Tanit.

"Notably in the post-pandemic period, companies are expected to use more technology to replace human workers. This is a trend happening worldwide."

Marisa Sukosol Nunbhakdi, president of Thai Hotels Association, said all employees are at risk of being laid off given the unprecedented crisis in tourism, but the risk is highest for those with the shortest and longest experience on the job.

According to the Tourism Council of Thailand, the tourism sector employs an estimated 4 million people, with less than 20% workers aged 60 or older, mostly in senior positions.

She said most senior hoteliers aged 55-60 may not be able to return to the hospitality business after being laid off.

They would prefer to spend retirement with their families in their hometown, or take on extra jobs rather than working in the tourism industry.

Mrs Marisa said this is a point of concern for hotels because senior workers understand tourist behaviour and are familiar with regular guests.

"Strong organisations have diverse age ranges because every generation can complement the others," Mrs Marisa said.

"But workers in the hotel business need to adapt for flexibility in order to multitask."

The hotels association set up a working group to prepare for post-pandemic business, including upskilling and reskilling programmes for the workforce and redesigning organisational charts for greater efficiency.

She suggested the government offer continued financial support such as debt holidays to help individual workers who lost their jobs. 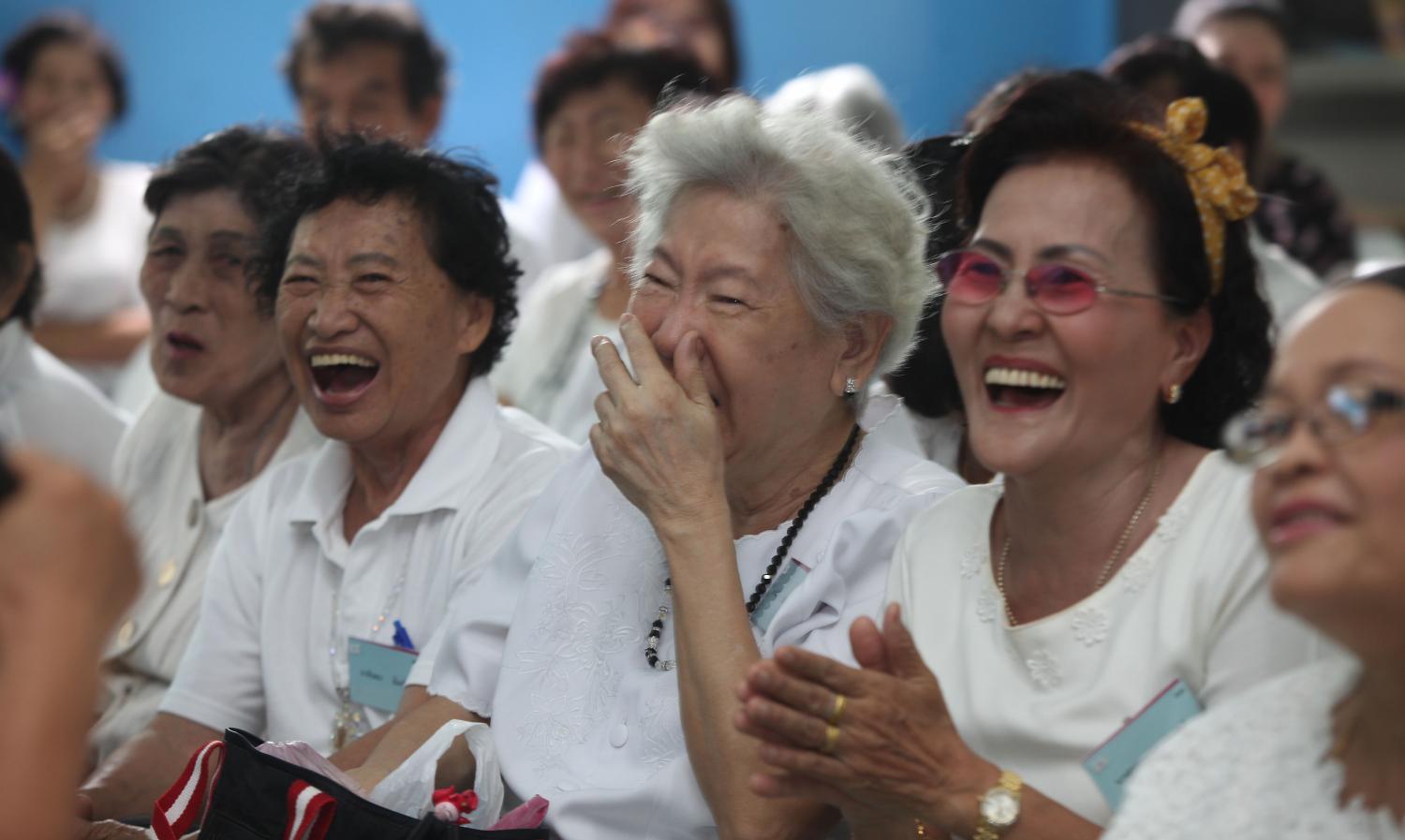 "The government no longer has time to dance around or procrastinate. Serious savings promotion needs to be accelerated. New generations who have just started working have to set up a feasible savings system for their future living requirements," said Ms Jiraporn.

"Without serious and speedy savings plans, the government's spending for the elderly will skyrocket in the near future."

Ms Jiraporn also suggests the government come up with measures to promote retirement savings. One option is faster enforcement of the National Pension Fund Act, which requires all companies in Thailand to establish provident funds for their employees, while another choice is an amendment to the existing NSF to allow people who are already in retirement savings systems such as the Social Security Fund (SSF) to become members, allowing more savings.

The Social Security Fund Act needs to be upgraded to ensure sufficient income after retirement, she said, citing a proposal to raise contributions from SSF members from 15,000 baht to 20,000 baht a month to help sustain the fund and ensure it can meet its old-age pension payout requirements in the future.

As most employers and employees will resist a proposal to raise the fund's contribution rates, fearing the higher financial burden, Ms Jiraporn said the government must try its best to convince employees of the benefits of higher contributions to ensure the fund compensates all members over the long term.

At the same time, she said, the government needs to build up confidence and transparency in SSF management in order to draw more people to participate in the system.

"The government should work to assure SSF members the fund will never fail, showing state readiness to shore up contributions in an emergency," said Ms Jiraporn.

Charuluck Ruangsuwan, the NSF secretary-general, said the fund is a key pillar of the country's retirement savings system, though it is vulnerable to threats. The NSF already proposed extending the maximum membership age to 65 from 60, as stipulated by law to promote savings.

The fund also asked the Finance Ministry to help consider increasing state contributions from a maximum of 1,200 baht to 1,800 baht per year.

The existing structure requires voluntary pension fund members to make a minimum contribution of 50 baht per year, up to a 13,200-baht maximum.

There is no requirement for a fixed monthly contribution.

The government makes a matching contribution of up to 50% of whatever members aged 15-30 choose to pay, for up to 600 baht a year.

If state contributions are raised to 1,800 baht per year, fund members would receive a higher amount of money at different ages, while the percentage contribution from the government would remain the same, said Ms Charuluck.

The NSF has cumulative savings of 8 billion baht. Most of the capital is invested in highly stable assets, with a minimal portion invested in equities. Last year the return was 2.75%.

As the Thai population ages, insurance companies will have to rethink the products offered to this demographic to fit their specific needs, suggests Thai Life Assurance Association president Sara Lamsam.

While health insurance helps curb medical and hospital expenses, the policy cost increases as people age, while pension insurance provides steady payments that do not scale up, he said.

"You should think about this early, while your health is still strong," said Mr Sara. "The insurance premium for the young is cheaper because of longer-term savings commitments."

Last year pension insurance grew by 17.5% amid the outbreak. This product pays regular amounts to policyholders when they reach retirement age.

However, he said the products do not yield enough money for life after retirement.

The association and the Office of the Insurance Commission are discussing revising pension insurance to serve an ageing society, as the number of elderly keep growing.

"In the future, pension insurance schemes should be linked to services related to the lifestyles of seniors, such as hospitals and nursing homes," said Mr Sara.