A travel agency employee sits in front of his closed shop in Bangkok on Thursday. Thailand remains closed to international tourists because of Covid-19.

The new Covid-19 outbreak is expected to cut tourism receipts by half during the Songkran festival after many provinces have voluntarily imposed a 14-day quarantine, while dozens of events have been cancelled or postponed, says the Tourism Authority of Thailand (TAT).

However, given the outbreak, Mr Yuthasak said the number of trips and revenue is likely to drop 50% to 1.6 million and 6 billion baht, respectively.

Almost 70% of guests headed for Prachuap Khiri Khan (Hua Hin) have already cancelled their hotel rooms as the province detected a high number of local infections. 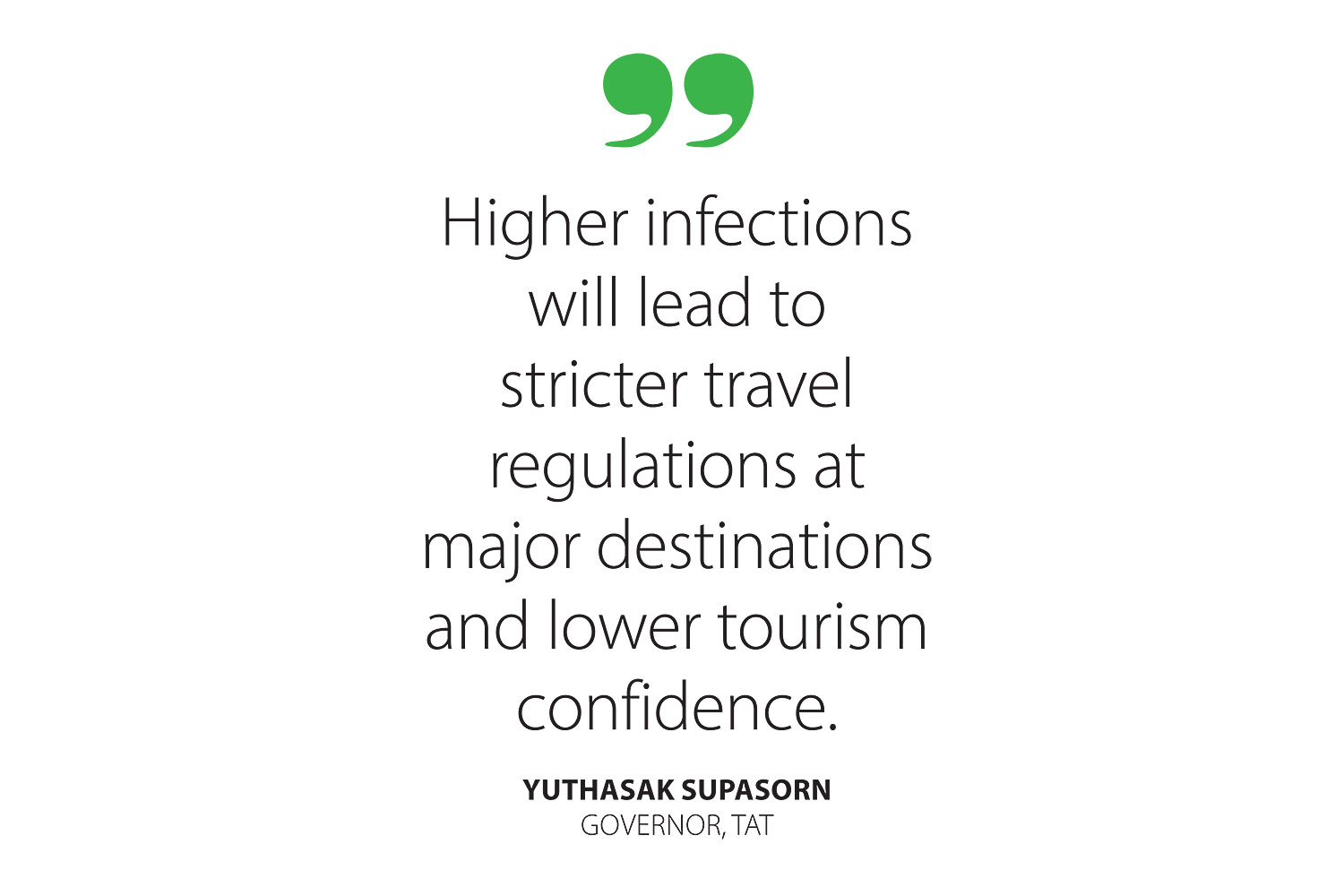 This week Hua Hin reported 25 Covid-19 cases linked to travellers from Nonthaburi. More tourists will continue to cancel bookings if the number of Covid-19 cases there continues to escalate, he said.

Chiang Mai, which requires tourists from Bangkok, Pathum Thani, Nonthaburi, Samut Prakan and Nakhon Pathom to observe a 14-day quarantine period or pass a test for Covid-19 upon arrival, has seen cancellations of around 20%.

Hotels in Pattaya reported a decline in bookings as the occupancy rate is expected to drop from 90% to 60% after tourists expressed concern over safety and strict travel measures in many places.

The Northeast, which has eight provinces requiring 10- or 14-day quarantines for those from at-risk areas, also recorded 20% cancellations, led by Nakhon Ratchasima with over 130 bookings erased.

Mr Yuthasak said hotels in the South reported cancellations at around 15% from an average occupancy of 50-90% previously.

Cancellations in this region are not as high as other places because Phuket and Phangnga are still allowing tourists to visit without quarantine. Instead, they have asked travellers to activate a tracking application.

However, some provinces that use Hat Yai airport in Songkhla as a transport hub may see more cancellations as Songkhla issued a 14-day quarantine mandate for travellers from at-risk areas, including Bangkok.

Hotels in Satun, a province that can only be reached from Hat Yai airport, has seen cancellations of 14.3% from an average occupancy of 54.4%.

Destinations in the Gulf of Thailand have also felt the impact as Samui, Koh Tao, and Koh Phangan have seen 20% of all bookings cancelled, while Nakhon Si Thammarat experienced 15% cancellations.

Meanwhile, some 38 events and activities planned for Songkran nationwide have been cancelled or postponed to help contain virus spread, including the TAT-sponsored "Amazing Songkran Festival" from April 13-15.