Surveys suggest the government needs to do more to enhance the country's vaccination rollout, which is straggling behind both global and regional peers

A health worker prepares a syringe with the Sinovac Covid-19 vaccine at Bang Khae market in Bangkok. (Photo by Pattarapong Chatpattarasill)

As various countries start to see positive results from mass vaccination programmes, Thais are getting angry following a surge in infections last week, prompting concerns about the possibility of stringent government measures to control the latest outbreak.

Businesses believe several factors are to blame for the latest outbreak, but by far the greatest one is slow-moving inoculation efforts by the authorities.

As of April 7, Thailand had 323,989 doses of vaccine administered to its population, the equivalent of half a dose for every 100 people, according to the Our World in Data project at the University of Oxford. Only 0.4% of the population had been vaccinated at this point in time.

Israel was in pole position in terms of inoculation efforts with 114 doses per 100 people, with 59% of its population inoculated against Covid-19.

The fresh outbreak in Thailand has been complicated by the spread of the UK variant, which British scientists say is 70% more transmissible than existing variants and a lot deadlier.

The week before last, businesses -- particularly those in the tourism sector -- held out hope the country could reopen to foreign travellers in coming months, with an economic recovery to follow. But the fresh outbreak dimmed their hopes with fears the whole process will return to square one. 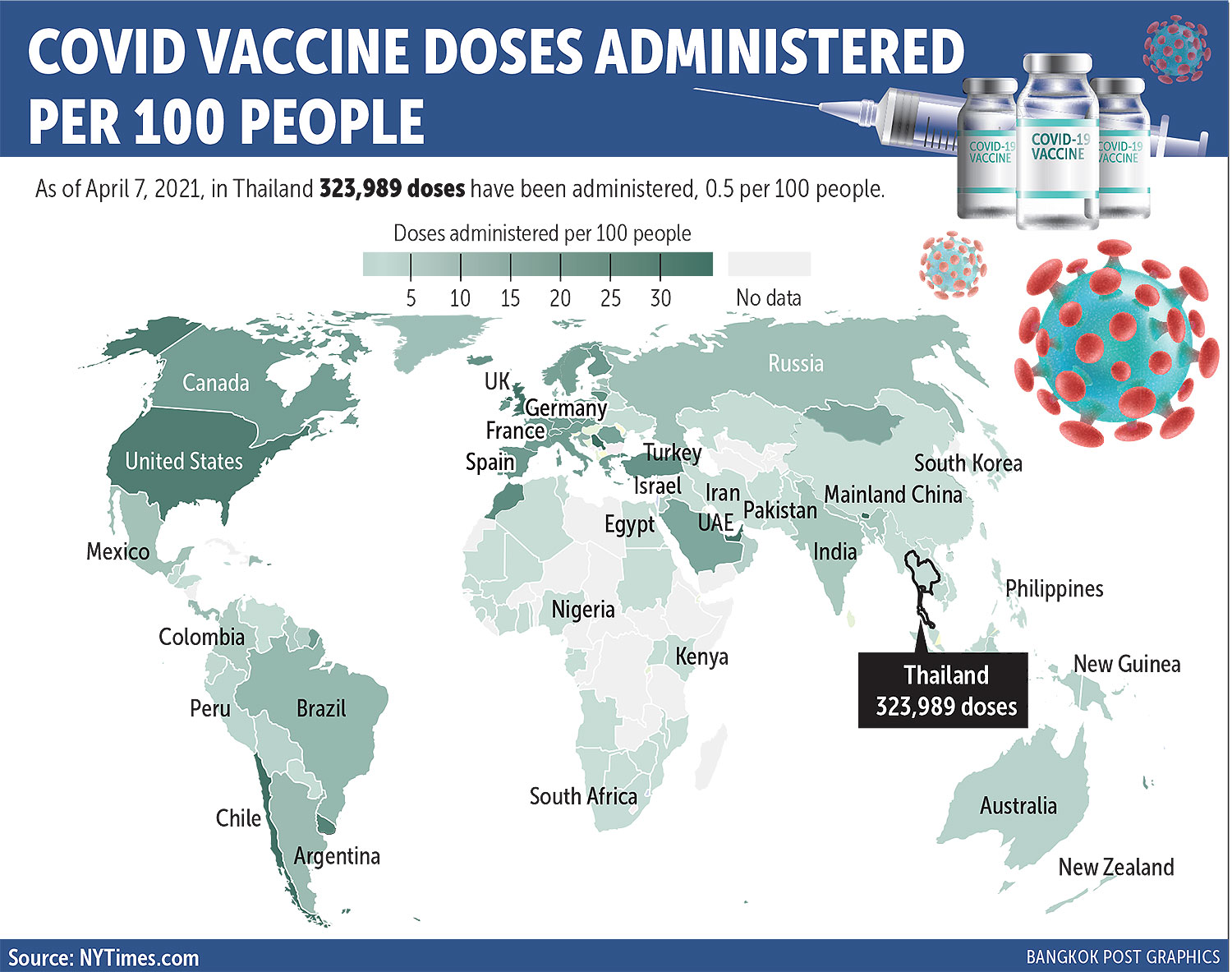 Nantanittaya Sesaweech, assistant managing director at Horizon Village and Resort, said with only two types of vaccines being used in Thailand, this cannot create public confidence as there is growing concern about vaccine effectiveness.

More vaccines and varied distribution channels, especially through private companies, are vital as they could provide an option for people who are able to pay for them, she said.

People will gain confidence if they can choose their vaccine option, said Ms Nantanittaya. Then the country can escape from its economic stagnation faster, she said.

"Even though the government rolled out a reopening timeline for international tourists, which may have sparked hopes for operators, there is no concrete plan to adequately distribute vaccines to local populations," said Ms Nantanittaya.

"There is no hope for us until mass inoculation actually begins."

The reopening plan might not occur according to the timeline if everyone has to rely on vaccines from the government, meaning companies should be allowed to jointly acquire more types of vaccines, said Charintip Tiyaphorn, financial controller at Pimalai Resort and Spa.

In addition, the government has to communicate and encourage people to get vaccinated, overcoming any hesitancy, she said.

"Vaccines are the only way to get ahead of the pandemic and allow tourism to survive," said Ms Charintip.

"Mass vaccinations will help accelerate the reopening process, which projected being fully open by January next year."

Vaccination will not only bring about confidence in terms of travel, but will also create an opportunity to restore jobs in the tourism sector and get the economy back on track, she said.

The Tourism Council of Thailand conducted a survey of 2,030 people and 730 tourism operators in March regarding opinions on vaccines.

The survey revealed participants had little understanding of Covid-19 vaccines, with an average score of 2.18 out of 5, suggesting they had no idea about the effects, efficacy, prices and types of vaccines available.

In terms of attitudes toward vaccination, 69% of people would like to receive a vaccine. Of this group, 47% would prefer vaccination from the government, while 22% said they would prefer to choose a vaccine and pay for it independently.

Only 31% of respondents said they were not ready to be inoculated this year.

Moreover, 50% of respondents would like the government to allocate budget and personnel to reduce the number of infections to zero in major tourism destinations including Bangkok, Phuket, Hua Hin, Pattaya and Chiang Mai to improve public confidence in tourism. 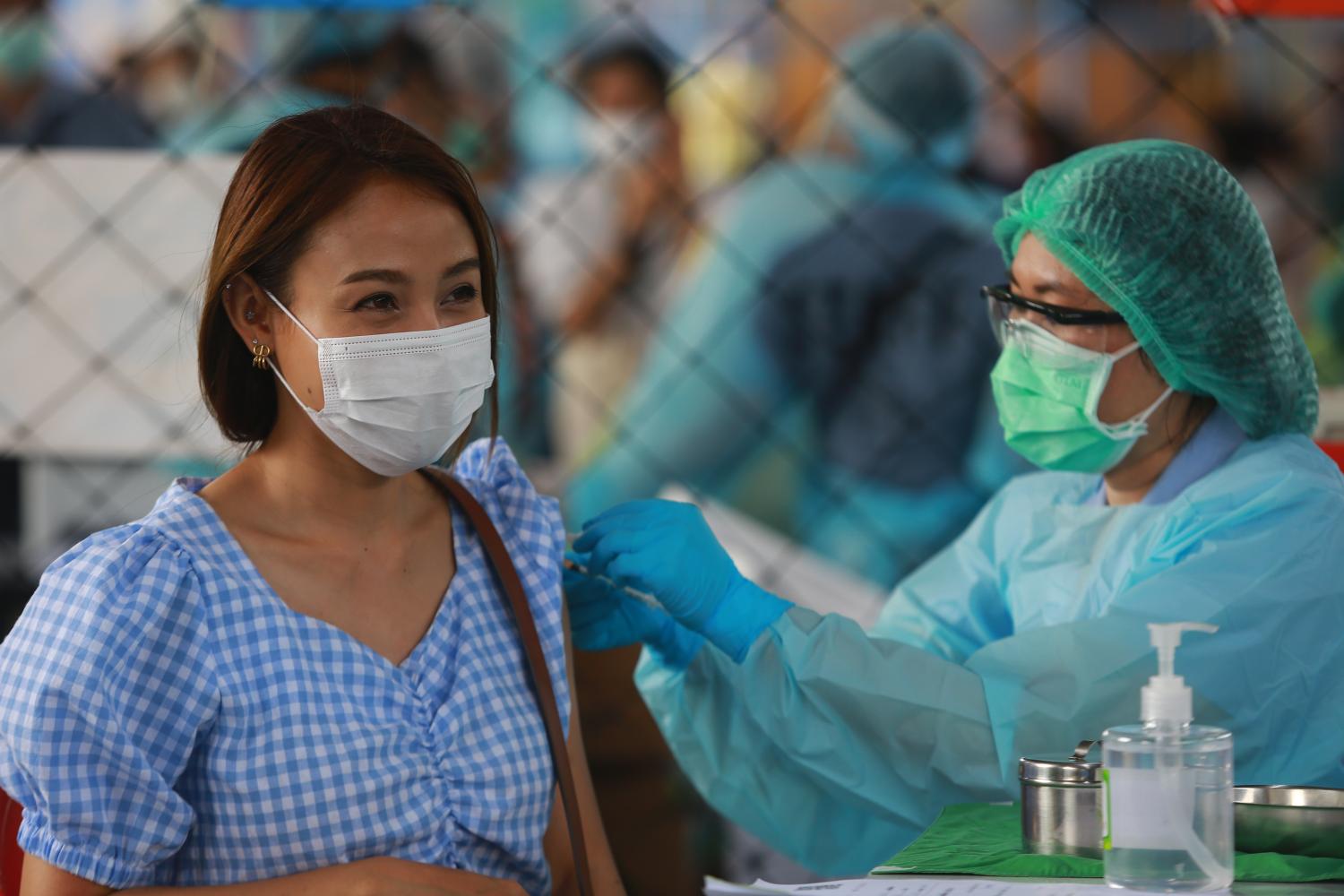 People at high risk for Covid-19, such as those residing in high risk areas, receive Covid-19 vaccines at a public health centre in Wattana district, Bangkok. Somchai Poomlard

The Federation of Thai Industries (FTI) also blames the government for slow progress in vaccination and demands a fast track for the private sector to help with the rollout.

"We have to admit the government is too slow in distributing vaccines," said FTI chairman Supant Mongkolsuthree.

The government has administered only around 300,000 doses of vaccine, which is low when considering the population is over 66 million, he said.

In Bangkok, the largest city, the authorities have only distributed vaccines at a rate of 5,000-10,000 people a day, according to Thai Chamber of Commerce chairman Sanan Angubolkul.

The FTI has continued to urge the government to accelerate vaccinations and facilitate the private sector in importing vaccines.

Allowing vaccinations through the private sector will provide another important channel to help authorities build herd immunity, he said.

Many companies have expressed an interest in purchasing vaccines, hoping to inoculate around 900,000 employees, according to the chamber.

FTI vice-chairman Kriengkrai Thiennukul warned both the government and people against dropping their guard against the virus, or their efforts to cure the economic pain will surely face a setback.

"We're worried about people's travel during Songkran, as their trips may increase infections, eventually resulting in many red zones across the country," said Mr Kriengkrai, referring to high-risk areas with considerable infections that require maximum control.

If the new outbreak leads to lockdown measures, the "old picture" in which business activities were all subdued will return, he said. 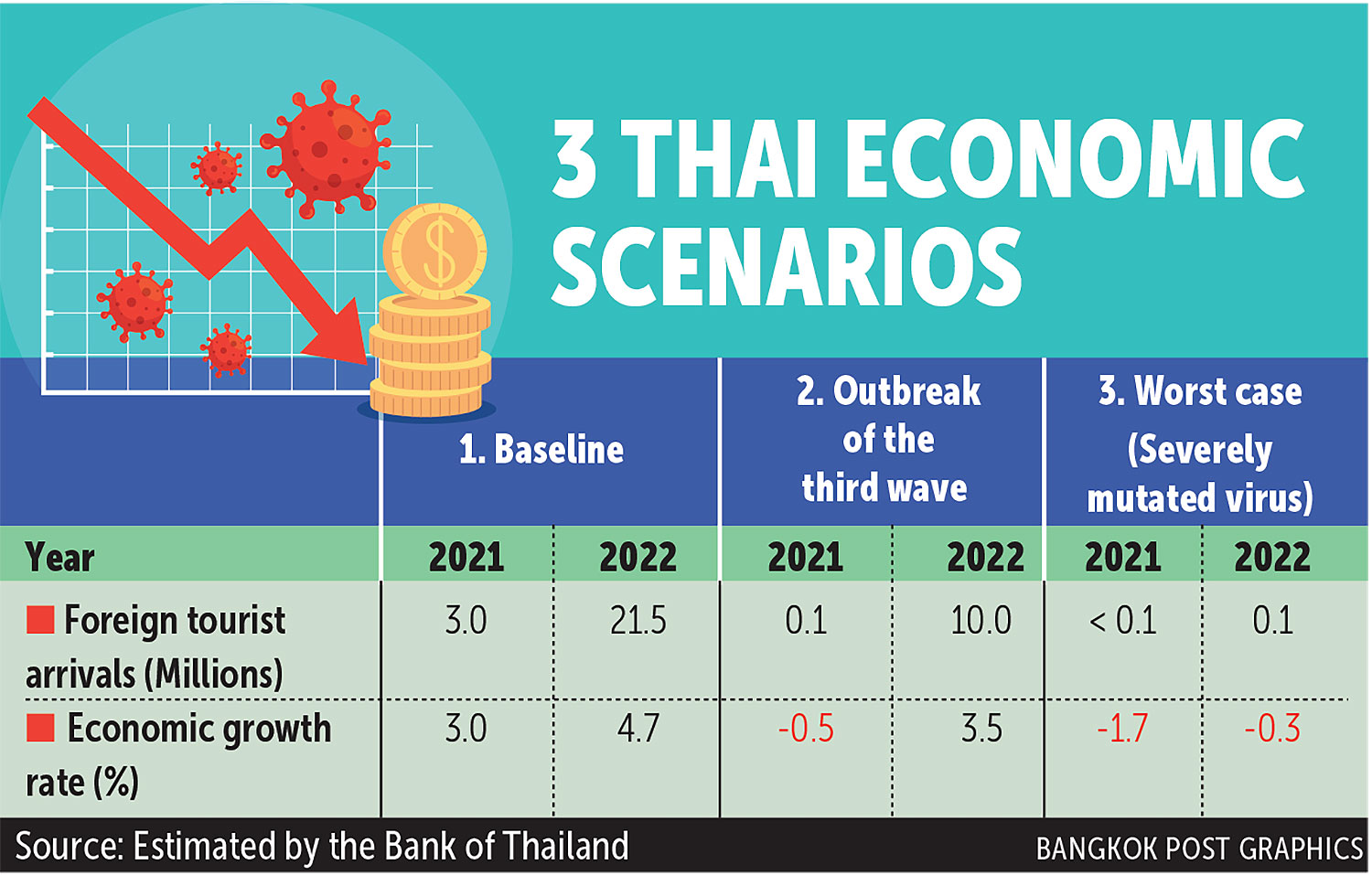 The government has given a clear indication private hospitals will be allowed to administer Covid-19 vaccines to the public.

"I am pleased to see private hospitals express their intention to acquire vaccines, which helps the government with the task," said Gen Prayut.

"Vaccine imports by private hospitals still face obstacles and we need to find ways to overcome them."

Meanwhile, the government brushed aside concerns it may run out of cash in the fight against Covid-19.

Budget Bureau director Dechapiwat Na Songkhla stressed the government still has over 300 billion baht to cope with the latest outbreak.

He said 40 billion baht can be directly drawn from the central budget to deal with the outbreak. Half of this sum has been allocated to buy a third batch of vaccines, reward health personnel and build field hospitals, said Mr Dechapiwat.

"We still believe the budget we've reserved is enough to rein in the fresh outbreak if it does not spread nationwide," he said.

According to Mr Dechapiwat, the central budget also has 99 billion baht allocated to deal with natural disasters.

Spending on emergency cases is estimated at 50 billion baht and if no serious natural disasters emerge, over 40 billion would be left over and could be redirected as additional spending to fight a third wave, he said.

Krisada Chinavicharana, permanent secretary for finance, said the ministry is evaluating the impact of a fresh wave before coming up with any additional relief measures. 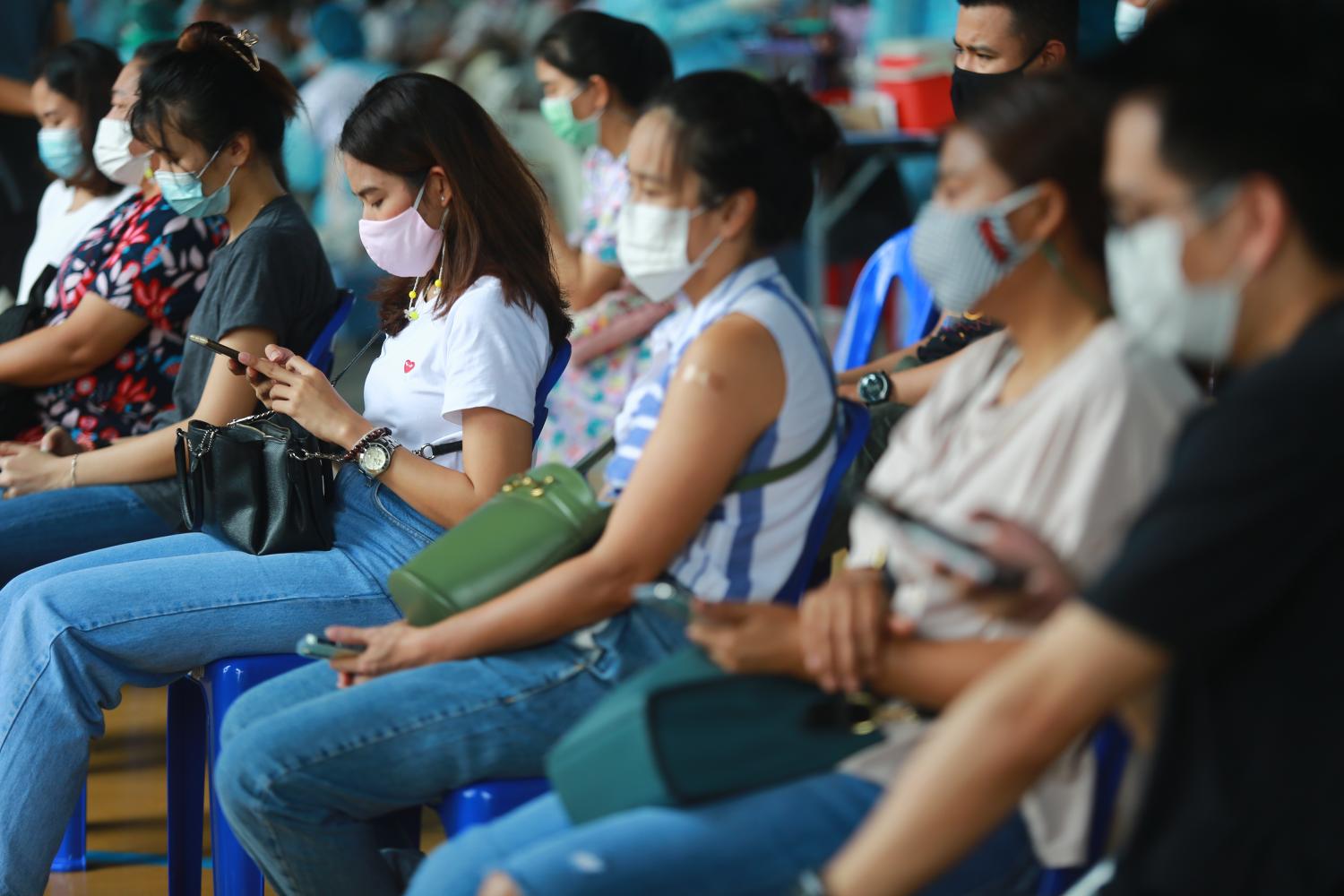 The Bank of Thailand forecasts the country's economic growth rate for this year to contract by 0.5% from 2020 in the event of a third wave.

According to the Monetary Policy Committee's meeting on March 24, the Thai economic outlook this year largely depends on the number of foreign arrivals.

If 3 million foreign travellers come to Thailand, economic growth is projected at 3%.

If only 100,000 foreign arrivals are recorded, the economy is expected to contract by 0.5%.

This scenario also takes into account a possible fresh wave in the second half this year, a delay in vaccinations, the vaccination rate, the country's reopening and a continuation of the ban on international travel, and virus mutations globally.

If the number of foreign arrivals to Thailand is below 100,000, which is the worst-case scenario, the country's GDP would contract by 1.7%. This projection is based on serious virus mutations and existing vaccines being ineffective in treating Covid-19 globally.

In the worst-case scenario, the impact would delay Thailand's reopening until the second half of next year.

In the first round of the outbreak last year, food delivery and e-commerce businesses reaped a windfall, with a surge in orders as people refrained from going out and practiced social distancing.

As a new round of the pandemic erupted this month, industry has begun to experience renewed strong demand.

"We saw transactions for food orders during April 5-7 surge 10% compared with the period just before the latest outbreak," said Thana Thienachariya, chairman of the board at Purple Ventures, operator of food delivery app Robinhood under Siam Commercial Bank.

To respond to the higher demand, Robinhood offered incentives to riders to carry out more deliveries.

As the fresh wave kicks in, orders are expected to jump 30% from the period right before the latest outbreak, he said.

Some 200 electric motorcycles are slated to be provided initially, and if the project receives a favourable response, the figure would increase to several thousand, he said.

Riders pay around 100 baht per day in rental fees, but they can earn up to 1,000 baht for a full day's delivery work.

"We think this can help unemployed people as their numbers are expected to rise later this year," said Mr Thana.

He said online food delivery has become an accepted part of the lifestyle for urban Thais.

Even as people start to return to their offices, the number of food delivery orders has not decreased, said Mr Thana.