Phuket sandbox timeline to be reset

Beach chairs lie empty on the resort island of Phuket in January. (Photo by Achadthaya Chuenniran)

The Tourism and Sports Ministry needs to reset the timeline for the Phuket sandbox because the province may not have enough vaccine doses following the new nationwide spread of the virus.

Tourism and Sports Minister Phiphat Ratchakitprakarn said next week the ministry plans to meet with all related agencies to discuss the reopening plan, previously set for July 1 this year, which needs a major revamp due to the spike in new daily infections.

The key determinant is insufficient vaccines for pilot destinations, said Mr Phiphat. Prior to the third wave, Phuket already secured more than 100,000 doses and is poised to get additional doses of around 930,000 for 70% of the population to achieve herd immunity by June.

But the spike in Covid-19 cases in many places has interrupted that plan, as a limited number of vaccines must also be distributed to other provinces, making it difficult to allocate a large lot to just one province.

"We are concerned about the reopening timeline. We still need to discuss the vaccine administration plan. If the herd immunity goal cannot be achieved, we may have to consider opening only certain areas in Phuket," he said. 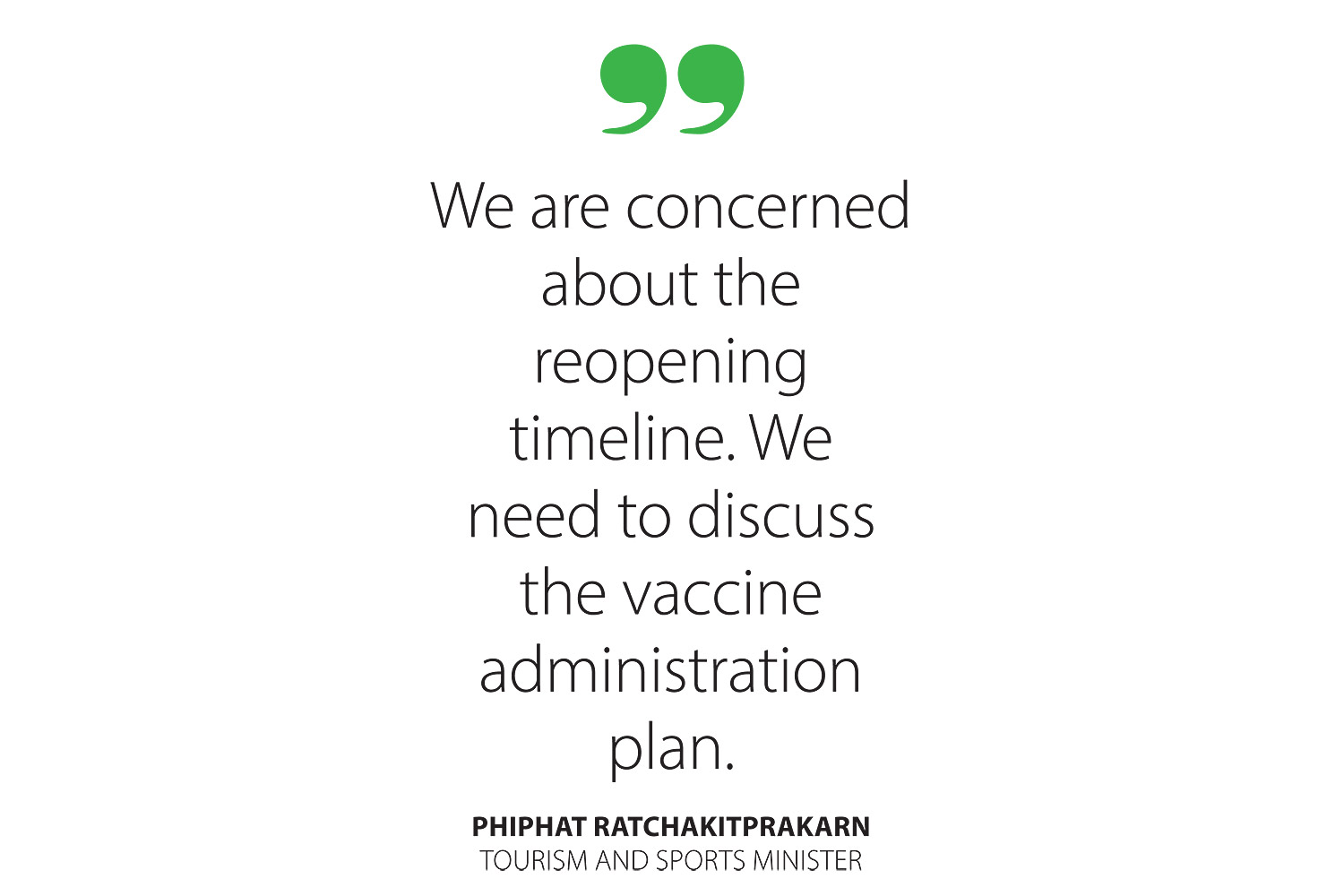 However, to continue with the same plan, even with restricted zones, will not be easy as long as the country still has increasing new daily infections, said Mr Phiphat.

"Most importantly, we still have to hear from other countries that we already started travel bubble negotiations with about their confidence regarding the same timeline," he said.

The outlook for tourism receipts this year might need to be adjusted again as domestic tourism was affected by the outbreak, said Mr Phiphat.

He said the meeting next week should offer a clearer scenario, with the private sector shedding light on the setting after the Songkran holidays this week.

Hotels in the North reported cancellations of more than 70% as a virus epicentre was located in Chiang Mai.

Prior the pandemic, the province was a top destination to celebrate Thai New Year.

Mr Phiphat, also in quarantine after having close contact with Transport Minister Saksayam Chidchob, who was diagnosed with Covid-19, said he will be ready to take a third swab test next week when he completes his isolation period.

He plans to hold a meeting at the ministry as soon as the results are clear.

CHON BURI: One of the world's most luxurious yachts owned by Joe Lewis, the British billionaire investor and owner of Tottenham Hotspur football club, has arrived in Pattaya.