The flipside of stablecoins
Business

The flipside of stablecoins

The central bank banned privately developed baht-based stablecoins, yet indicated interest in developing its own coin in the future

Stablecoins are a new class of cryptocurrencies pegged to traditional financial assets such as fiat currencies, offering crypto traders safe harbour in a market characterised by volatility.

Doubts still remain about just how stable these coins actually are and what the risks are if they are untethered from their corresponding currencies. When bitcoin and other cryptocurrencies eventually end their remarkable bull run that began late last year and the inevitable sell-off ensues, will stablecoins live up to their promise? 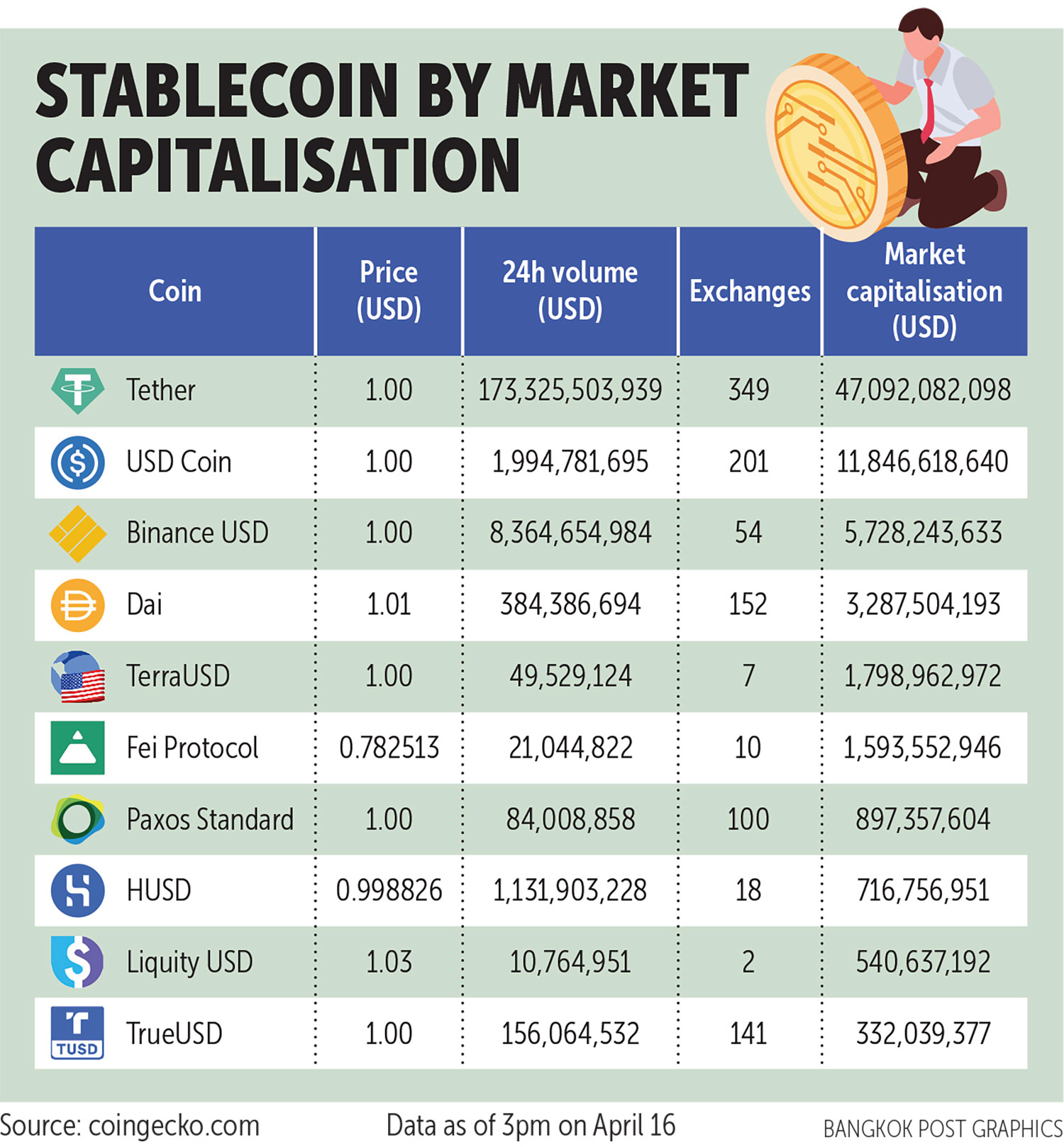 BILLIONS ON THE LINE

The global market cap of stablecoins is US$75.3 billion, or 3.77% of the total cryptocurrency market cap worth $2 trillion.

There are currently more than 200 stablecoins of over 6,000 cryptocurrencies available in the market that are collateralised by fiat currencies such as the US dollar (USD), British pound (GBP), euro (EUR), Chinese yuan, Russian ruble, and even Thai baht.

Although the Bank of Thailand issued a warning on March 17, asking people to refrain from participating in any activities involving a recently created baht-backed stablecoin called Thai Baht Digital (THT) issued on the Terra platform, the coin's market value still remains the same at around 13,483 baht as of April 16.

Though stablecoins are rising in popularity, the public's long-standing trust in the central bank means most people follow these advisories.

Yet the Bank of Thailand has shown interest in issuing central bank digital currencies (CBDCs). And the bank said cryptocurrencies and stablecoins issued by the private sector and CBDCs can co-exist as they are used for different purposes.

Tanwa Arpornthip, a researcher at Block Research, the blockchain research unit of the College of Computing at Prince of Songkla University, said one reason why THT failed to gain traction in the Thai market is no tech developers dared to develop a decentralised finance (defi) platform to accommodate trade of the currency.

"Some people hold stablecoins because they allow them to access defi and cryptocurrencies in a very simple way, but they still prefer fiat currencies over stablecoins," he said.

Defi platforms are typically operated on distributed ledger technology (DLT) such as blockchain, which aims to remove intermediaries between transacting parties and decentralise the regulation of currency for all stakeholders.

Stablecoins were invented to bridge the gap between fiat currencies and cryptocurrencies as they offer price stability while giving traders freedom and privacy in financial transactions.

However, he said stablecoins are still a synthetic asset with value tied to an asset of commonly accepted value. If any component of the stablecoins' back-end system is not functioning properly, the stablecoin could become unpegged from the cryptocurrency and lose the trust of investors.

"Anyone who holds stablecoins must always keep in mind they can be unpegged and they cannot be substituted for fiat money," Mr Tanwa said.

According to Bank of Thailand data, the most liquid portions of the money supply in Thailand are still banknotes and coins in circulation. The money supply of baht is currently 1.86 trillion baht, or about $59.6 billion.

Fiat currencies still massively eclipse their stablecoin counterparts in circulation. The market cap of Tether (USDT), the oldest and largest US dollar-backed stablecoin, was only $47.1 billion as of April 16.

However, Tether is primarily known for raising doubts among investors about this new digital asset class after it admitted in 2019 its coins were partially backed by loans to the company and "cash equivalents", which may include other cryptocurrencies.

Mr Tanwa said considering the current market size of stablecoins, it will take a long time for stablecoins to beat or disrupt fiat money.

"If the central bank is concerned that THT will destabilise the baht, the central bank should not ban it but instead control the size of the trading platform and standardise a stablecoin-based protocol," he said.

People who hold stablecoins must be provided incentives to help build communities to stabilise the currency, he suggested.

"If stablecoins prove so effective as a medium of exchange that people use them instead of fiat money, the stablecoins will eventually crash because they are tied to the underlying asset," said Mr Tanwa.

Stablecoins are designed to be used on defi platforms that provide higher returns, which should generate more financial activity and money flows, he said.

Therefore, if the government legalises the use of baht-backed stablecoins, it will result in more financial activities for both THT and the baht currency.

The authorities gain more leverage to adjust the value of the baht if baht-backed stablecoins are allowed, said Mr Tanwa.

"If the regulator is worried about the stability of the baht, it can regulate trading activities of THT on the defi platform, based on whether it wants more or less activity," he said.

Moreover, the government can collect more taxes from the trade of stablecoins if it is legalised.

Investors on a defi platform who earn revenues through the trade of any assets should pay taxes, said Mr Tanwa.

Kavin Phongpandecha, chief executive of Bitazza, said the "perfect" CBDC as a medium of exchange would be useful in helping the government achieve "targeted quantitative easing (QE)", or injecting money into specific areas of the economy that lack liquidity, or any underperforming sectors that are in need of government support.

This targeted QE could be easily monitored and provides an easier way to measure the multiplier of the money injected into those areas of the economy, he said.

However, CBDCs are liable to suffer from inflation, albeit in the form of digital inflation.

Another disadvantage of CBDCs is they might violate personal privacy and restrict the freedom to make financial transactions because each transaction can be closely monitored by the regulator, said Mr Kavin.

"Many people still benchmark their portfolio against fiat money. I think stablecoins will not replace fiat currencies as both stablecoins and CBDCs are expected to be blended together in smart contracts, used as a medium for financial transactions in the future," he said.

Paiboon Nalinthrangkurn, chairman of the Federation of Thai Capital Market Organizations, said central banks' CBDCs for retail investors will not replace cryptocurrencies as the latter will still be available for tech-savvy investors that love the technology and privacy for their financial activities.

Poramin Insom, founder and chief executive of Satang Pro Corporation, said a baht-collateralised stablecoin is unlikely to experience wide use in Thailand because the central bank strongly opposes the idea, stating as much in its ban of THT trade.

Thais will not dare use the stablecoin for fear of breaking the law, limiting its use to mostly those outside the country, he said.

The transaction volume of THT is still very small. The creator of THT intended it for use by Thais, so when the central bank declared it illegal, the creator decided not to issue the coins, said Mr Poramin.

"I think THT is unlikely to see extensive use in Thailand," he said.

On the other hand, Terra, the creator of THT, will want the stablecoins to be used in each of its local markets to generate traffic, said Mr Poramin.

The Bank of Thailand is conducting a trial for retail CBDCs for public use, which is a digital form of money issued by the central bank equivalent to physical banknotes, as part of its Business Prototype Development Project.

The project marks the first time the central bank expanded the scope of CBDC development to business users.

During 2021-2022, the Bank of Thailand plans to focus on R&D for a publicly accessible retail CBDC.

Kannithi Tongtanagoon, chief operating officer of Cryptomind, the central bank is concerned baht fluctuation may happen if THT is widely adopted in the country.

"If the popularity of THT increases, it may affect the country's financial stability," Mr Kannithi said.

People may carry more asset value in baht-backed stablecoins than baht, then spend the stablecoins in exchange for goods, he said.

The increase in stablecoin use may result in higher volatility of fiat currencies and erode people's confidence in the price stability that fiat currencies traditionally provide, said Mr Kannithi.

Moreover, if the central bank didn't block THT, other platforms such as Binance or Ethereum may be interested in building another baht-backed stablecoin, he said.

For THT holders, they may just aim for profit margin or arbitrage between THT and other coins, said Mr Kannithi.

If the use of THT becomes as widespread as stablecoins pegged to the USD, individuals may see this as an opportunity to start peer-to-peer lending businesses without intermediaries, allowing them to arbitrarily set their own interest rates and profit from a lack of regulation by the central bank, he said.

"Whether THT becomes popular or inactive remains to be seen, but it is obvious the central bank is worried quite a bit," said Mr Kannithi.