Plunge in rents reflects the impact of the pandemic, says ECA International

Bangkok has fallen 19 places to the 49th most expensive location worldwide for international executive-standard accommodation.

Bangkok has fallen 19 places to the 49th most expensive location worldwide for international executive-standard accommodation, according to ECA International, a provider of information and software for the assignment of employees around the world. 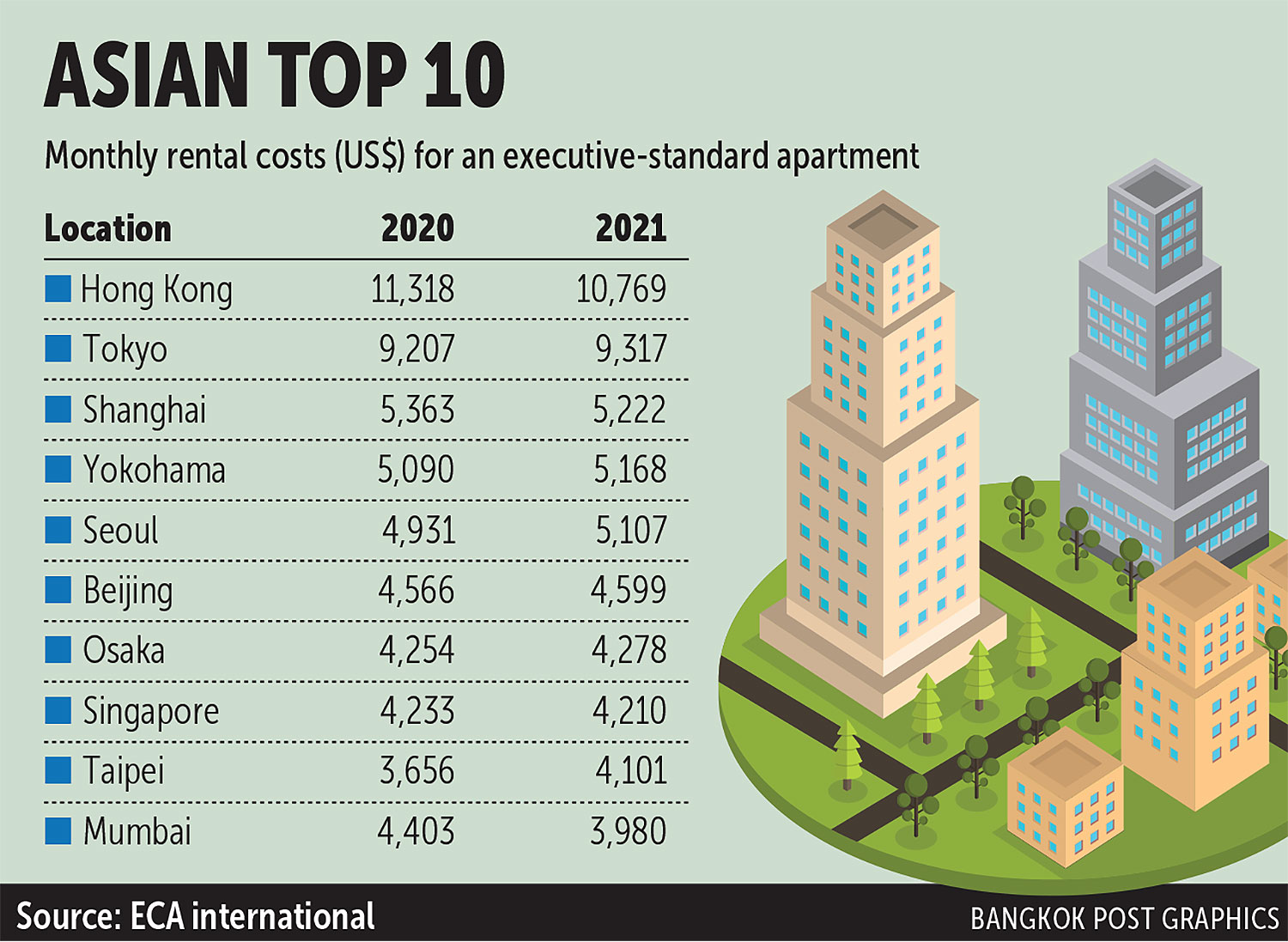 The decline reflects the severe impact that the Covid-19 pandemic has had on the rental market in the tourism-reliant Thai economy, ECA said in its latest survey.

Hanoi saw a similar drop of 12 places to 81st place, based on an analysis of data gathered in September 2020. The survey uses average rental prices for a three-bedroom apartment in the mid-range of the expatriate market.

"Rental prices have dropped in many locations across Asia over the past year, but this has been especially notable in locations which are heavily reliant on overseas visitors and residents, such as Thailand and Vietnam," said Lee Quane, regional director for Asia at ECA International.

"Average rents in Bangkok have dropped by over 12% in just one year, while Hanoi and Ho Chi Minh City have seen a negative swing of 9% and 6%, respectively.

"The rental market in these locations is heavily tied to the fortunes of the tourism industry, and landlords who previously rented out accommodation on a short-term basis, have since converted these to long-term leases -- thus increasing supply and reducing market rents further. Therefore, it is unlikely that we will see a change to this trend until international travel is fully open again."

ECA International has been conducting research into accommodation costs for international executives for over 20 years. It compares rental costs in accommodation in areas typically inhabited by expat staff in over 360 locations worldwide. Other highlights from the survey in Asia Pacific markets include:

Singapore is the 26th most expensive location, with rents falling by an average of 2%;

Hong Kong is the most expensive location worldwide for the fourth year in a row, despite a decrease in rental costs;

Taipei climbed 20 places to the 29th most expensive location globally;

Australian cities fell in the rankings, with Sydney plunging 10 places to 46th position.

In Singapore, the average monthly rental price for an unfurnished, mid-market, three-bedroom apartment in areas commonly inhabited by international executives is now US$4,210 (S$5,747) -- a drop of 2% from a year earlier.

"Rent levels in Singapore are always notably stable and this year is no different, with the country seeing only a slight dip in market rents," said Mr Quane. "This represents a reversal of the increase in rental costs seen in the previous year, and is likely the consequence of Covid's impact on the wider economy in Singapore.

"Moreover, with greater immigration restrictions for overseas workers set in place, this has suppressed the demand for accommodation in the country this year."

Hong Kong rental costs dropped by an average of 5.95% but it still topped the global table.

"The pandemic has had a serious effect on international business in general, but more specifically, has severely limited the number of overseas workers moving to Hong Kong," said Mr Quane. "This, together with the ongoing impact of socio-political tensions on Hong Kong's economy, and the city's unemployment levels at its highest rate in over 15 years, has resulted in a lower demand for high-end accommodation."

Cities in Taiwan all rose in the rankings this year, as rental markets saw an increase -- especially for Taipei, which climbed 20 places to 29th.

"This growth was a knock-on effect of the nation's success in mitigating the transmission of the Covid virus, as well as the repatriation of staff who were previously assigned to China," he said.

"Though rental prices remained largely stable in Europe, the true impact of the Covid-19 pandemic on rent levels is still yet to be seen," said Mr Quane. "While many residents left cities to move further out or back home, the pandemic effectively froze many property markets instead of causing immediate downward pressure on rents.

"However, as many European locations are still in the midst of lockdowns, and are experiencing other pandemic-related issues, we have yet to see big drops in European rental markets."