The Bank of Thailand (BoT) slashed Thailand's economic growth forecast for 2021 on Wednesday for the second time this year to 1-2%, largely depending on the procurement and distribution of Covid-19 vaccines.

The central bank's previous estimate of growth of gross domestic product (GDP) was 3% but it now includes three scenarios including the base, worse than the base, and worst-case scenarios, said the secretary for BoT's Monetary Policy Committee (MPC) Titanun Mallikamas.

For the base scenario, the bank predicts a GDP growth of 2%. This prediction assumes that vaccine procurement and distribution reaches 100 million doses this year and leads to herd immunity in the first quarter of 2022. Moreover, it also factors in foreign tourist arrivals increasing to 1.2 million while the number of unemployed and underemployed hovers around 2.7 million.

Under the worse than base scenario, the bank forecasts GDP growth to hit 1.5% with procurement and distribution of 64.6 million vaccine doses which will lead to herd community by the third quarter of next year. In addition, offshore tourist arrivals will hit 1 million while the number of unemployed or underemployed hits 2.8 million.

Mr Titanun said the central bank assessed the worst-case scenario to cause the GDP to grow 1%. This prediction was made under the assumption that vaccine procurement and distribution is delayed with less than 64.6 million doses procured and a delayed distribution this year which will prevent herd community until the final quarter of next year. In this scenario, the number of unemployed and underemployed will reach 2.9 million. 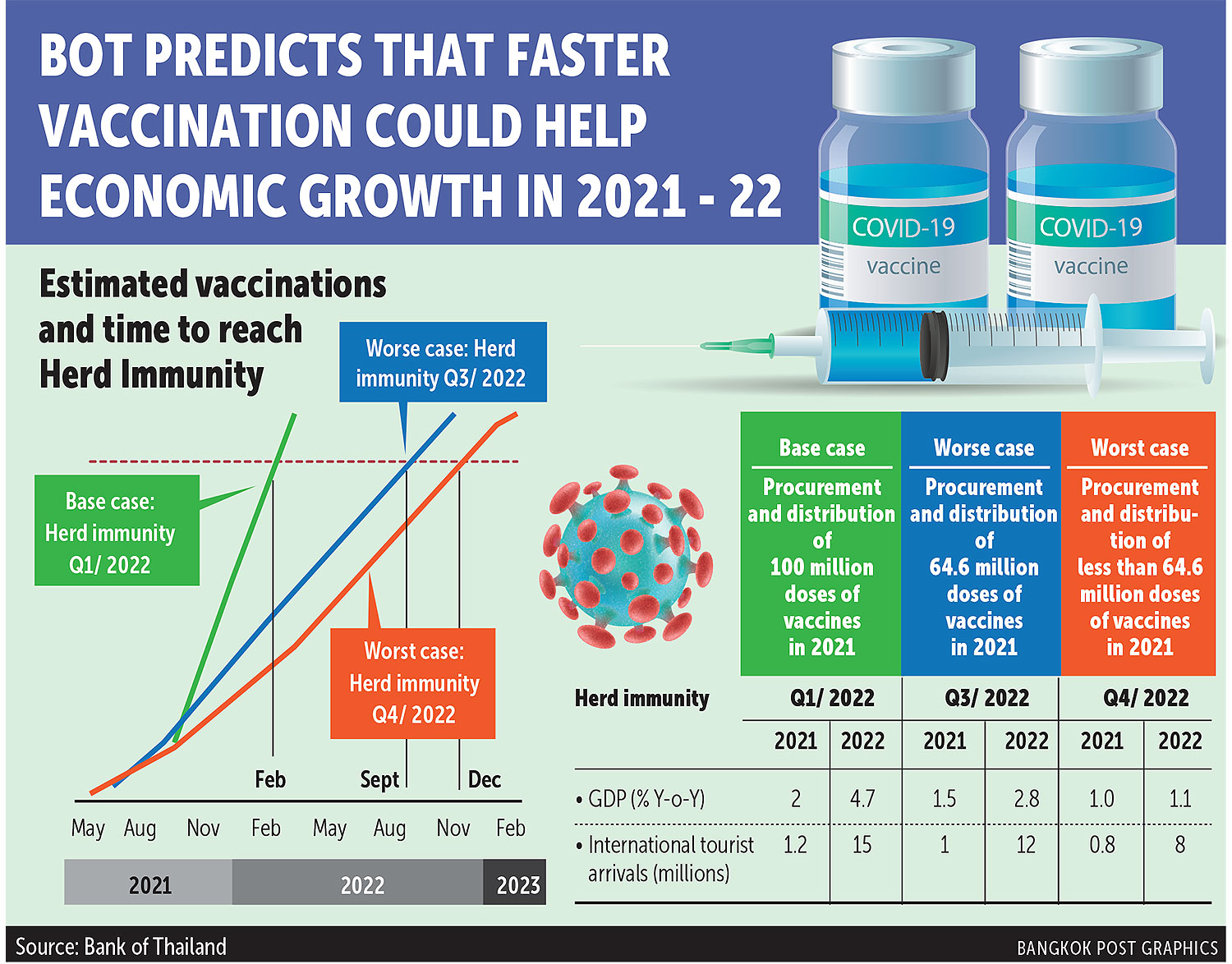 However, the assumptions do not include the government's new economic stimulus packages.

"If the worse and worst-case scenarios do not take place, the Thai economy could achieve growth of 3-5.7% in 2021-2022. So, vaccines are a key factor to drive the country's economy," he said.

Despite this, the central bank revised down the country's GDP forecast for 2021 in March from 3.2% previously to 3% and the next revision was scheduled in June. However, given the higher impact of the third wave of Covid-19, the bank has decided to cut the economic growth forecast earlier than scheduled.

In case of a delay in vaccine procurement and distribution, it will impact the country's reopening and weaken the tourism sector and small-and-medium-sized enterprise (SME) segment.

In a related matter, Mr Titanun said the MPC on Wednesday voted unanimously to maintain the policy rate at 0.50%. The committee assessed that the Thai economy would expand at a much slower rate due to the third wave of Covid-19 which has affected domestic spending and foreign tourist figures.

The MPC believes that procurement and distribution of vaccines in an adequate and timely manner was the most important issue for the Thai economy at present. In addition, the committee believes the continuity of government measures and policy among government agencies is critical to support economic recovery impacted by the new outbreak.

The measures to accelerate the procurement and distribution of vaccines will prevent a prolonged outbreak. Fiscal measures should ensure the continuity of fiscal impulses, mitigate the impacts of the outbreak and support economic restoration going forward.