A restaurant in Siam Square is deserted as most people work from home and are banned from dining at eateries. (Photo by Chanat Katanyu)

The third wave of the pandemic has unnerved businesses who previously believed they would be able to recover this year after Covid-19 walloped their income in 2020.

Complicated by a more contagious UK Covid-19 strain, the third wave has seen more than 1,000 infections a day since April 14, with deaths climbing to double digits a day.

The fresh outbreak prompted stringent government measures in provinces saddled with high infections, including a ban on dining at restaurants and gatherings of more than 20 people.

With daily new infections lingering around 2,000 a day with no improvement in sight, businesses have started to adjust their outlook and strategies to prepare for a worsening situation. 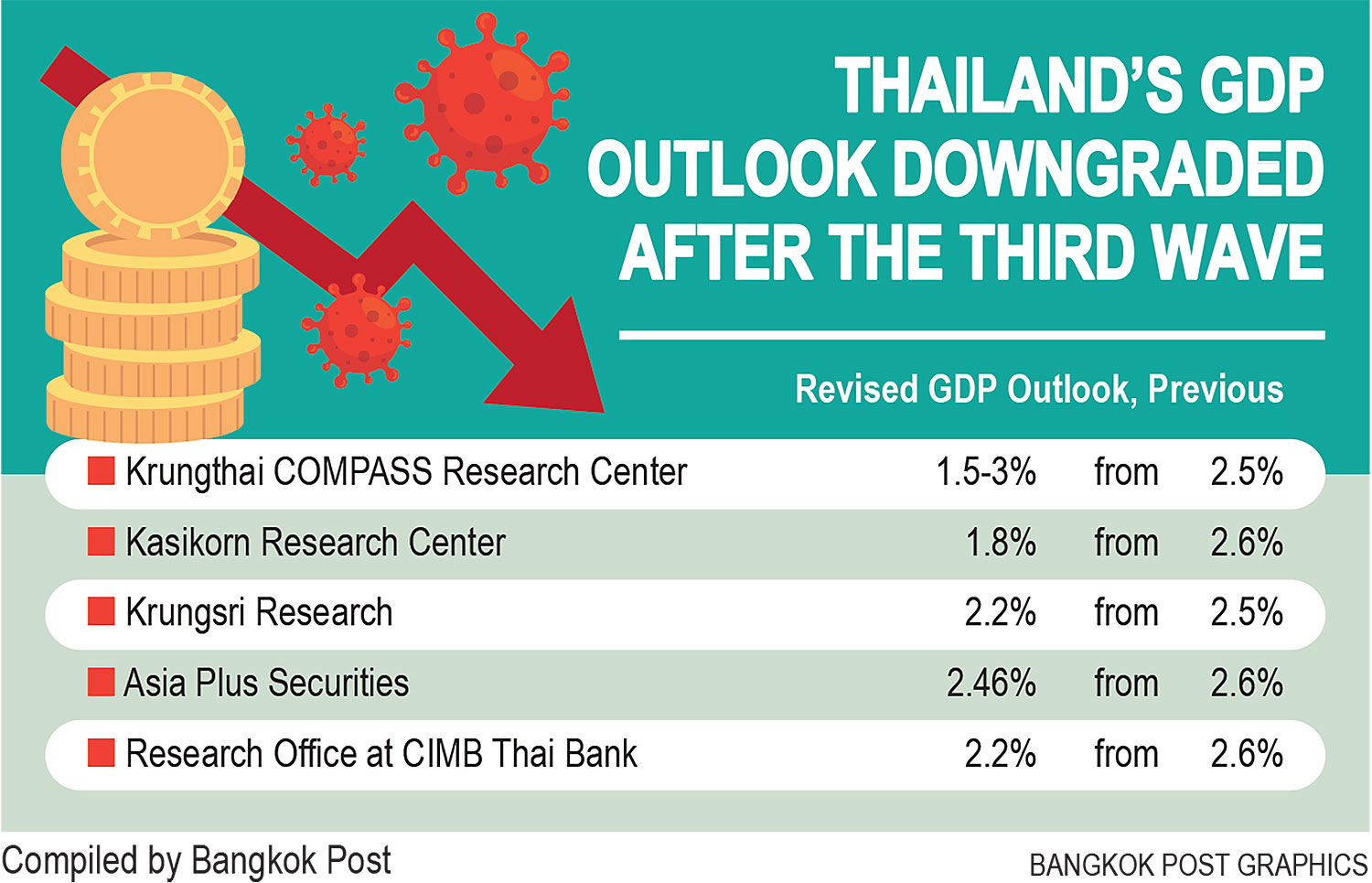 The Thai Chamber of Commerce indicated the high infection rates may cause the government to resort to more draconian measures to stem the viral spread.

If new infections are not slowed within 7-10 days, continuing around 2,000 cases a day, the government needs to intensify measures, said chamber chairman Sanan Angubolkul.

"New measures will certainly affect businesses, but the private sector is ready to cooperate to prevent the public health system from collapsing," he said.

If measures similar to those implemented during the first outbreak last year are re-imposed, they will cost Thailand 200-300 billion baht in damage a month, leading to GDP contraction in the second quarter, said Mr Sanan.

He expects Thailand may encounter the worst impact from Covid-19 in the second quarter, requiring a financial cure.

The cabinet approval of 225 billion baht in relief packages to stimulate the economy for the rest of the year is a good move, said Mr Sanan, but the chamber wants the government to direct its fiscal injection specifically in the second quarter.

He believes the situation will improve in the third quarter when Thailand secures more Covid-19 vaccine supplies.

Thanavath Phonvichai, president of the University of the Thai Chamber of Commerce, said the university estimates an economic loss of 300-450 billion baht this year if the contagion is not contained by June.

However, the loss is expected to reach up to 600 billion baht if the outbreak continues beyond June.

He said the university needs 2-4 weeks to revise its economic growth forecast from 0.0-1.5% for this year. 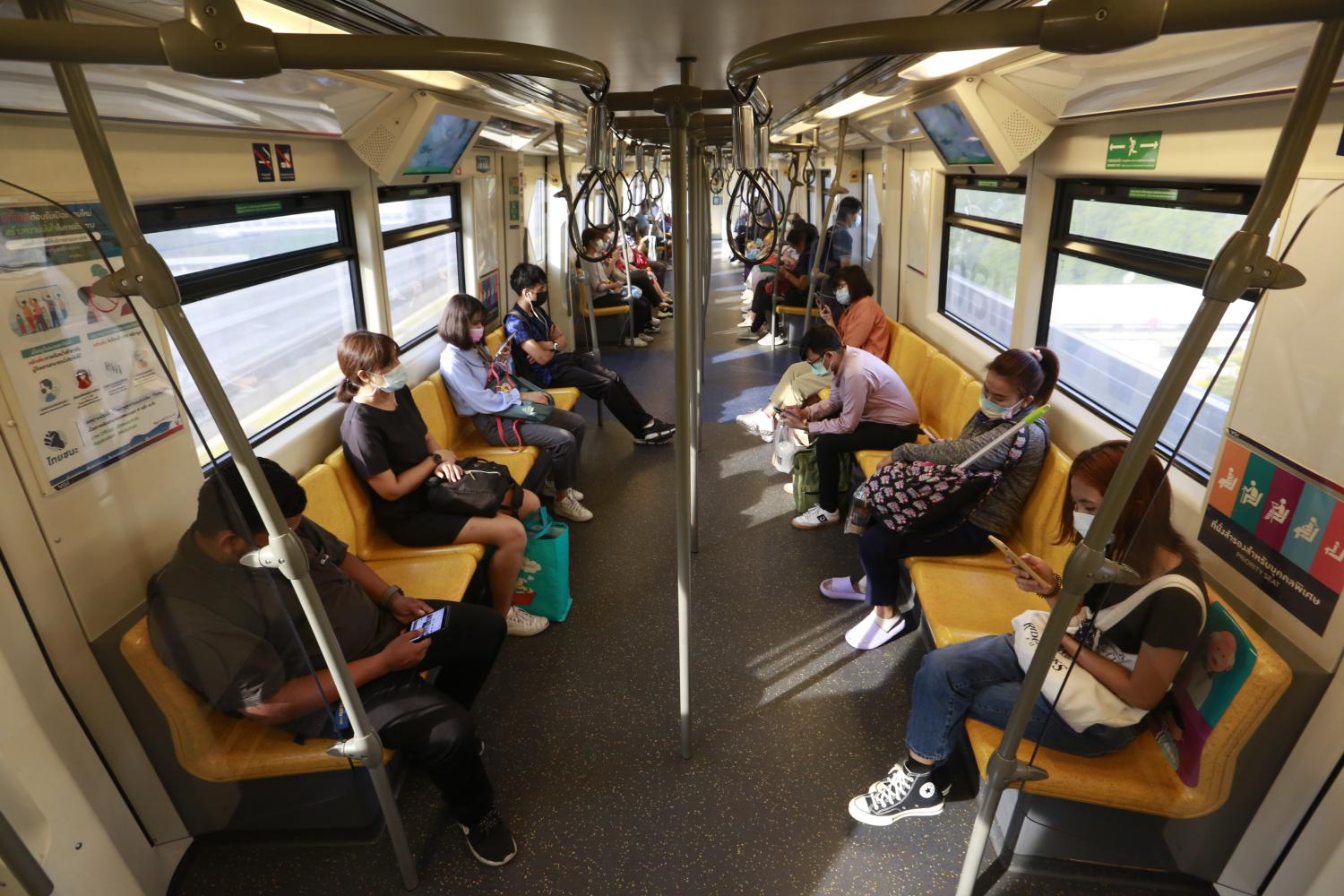 People travelling on the skytrain maintain social distancing as a precaution against the contagion.  Arnun Chonmahatrakool

BRACING FOR THE WORST

The manufacturing sector has managed to weather the third-wave impact, thanks to the lessons learned from the first and second outbreaks, according to the Federation of Thai Industries (FTI).

BCPs, which includes wearing masks and a quarantine for workers returning from risk areas, allow factories to continue operations.

Factories have not shut down as happened during the first wave, nor experienced high infections among workers, which occurred during the second wave earlier this year.

"If the government cannot stop the virus from spreading to more communities, the economy will suffer," said Mr Kriengkrai. "That is the worst-case scenario for Thailand."

Some 45 industries under the FTI are reporting varying impacts from the pandemic.

Up to 30 industries, including medical devices, rubber gloves and cars, reported increased exports as "purchase orders keep rolling in". The global economy, driven by the US and China, has begun to recover, said Mr Kriengkrai.

The remaining 15 industries are struggling and depend on the domestic market, especially those in the tourism and service sectors, he said.

The manufacturing sector, which accounts for 30-40% of GDP, has replaced those two sectors in driving the Thai economy, said Mr Kriengkrai.

Thirayuth Chirathivat, chief executive of Centara Hotels and Resorts, said the company cut operational costs as much as possible to maintain cash flow, especially for payroll and maintenance costs to prepare for an unexpected outbreak from new variants, which would mean another heavy slump in tourism demand.

In terms of long-term prospects, Centara planned in advance to ensure liquidity in case of uncertainty throughout next year.

Even with tourism activity on hold to contain the virus spread, communication with guests is expected to maintain the market until signs of a potential rebound become evident, said Mr Thirayuth.

He said the company is preparing packages to attract both domestic and international markets once travel is safe again and tourism sentiment improves.

The company gained experience managing its business during the pandemic, making it confident Centara can handle any future outbreaks, he said.

However, small and mid-sized hoteliers may not survive a fourth outbreak because they are already suffering from insufficient cash flow and difficulty in securing financial aid, said Mr Thirayuth.

He said the government should offer practical measures that are easier to access, such as the asset warehousing programme that allows operators to transfer their assets as loan collateral to suspend debt repayment, or the extension of the debt holiday to mitigate the economic impact from the pandemic.

The government should administer at least 300,000 doses per day, as it has promised the public, he said.

"Major tourism destinations gearing up for the country's reopening should be prioritised for mass vaccination to welcome back the international market as scheduled," Mr Thirayuth said.

"If the country cannot gain the confidence of tourists who are already vaccinated, they will turn to safer destinations. Thailand will miss an opportunity to cater to their demand." 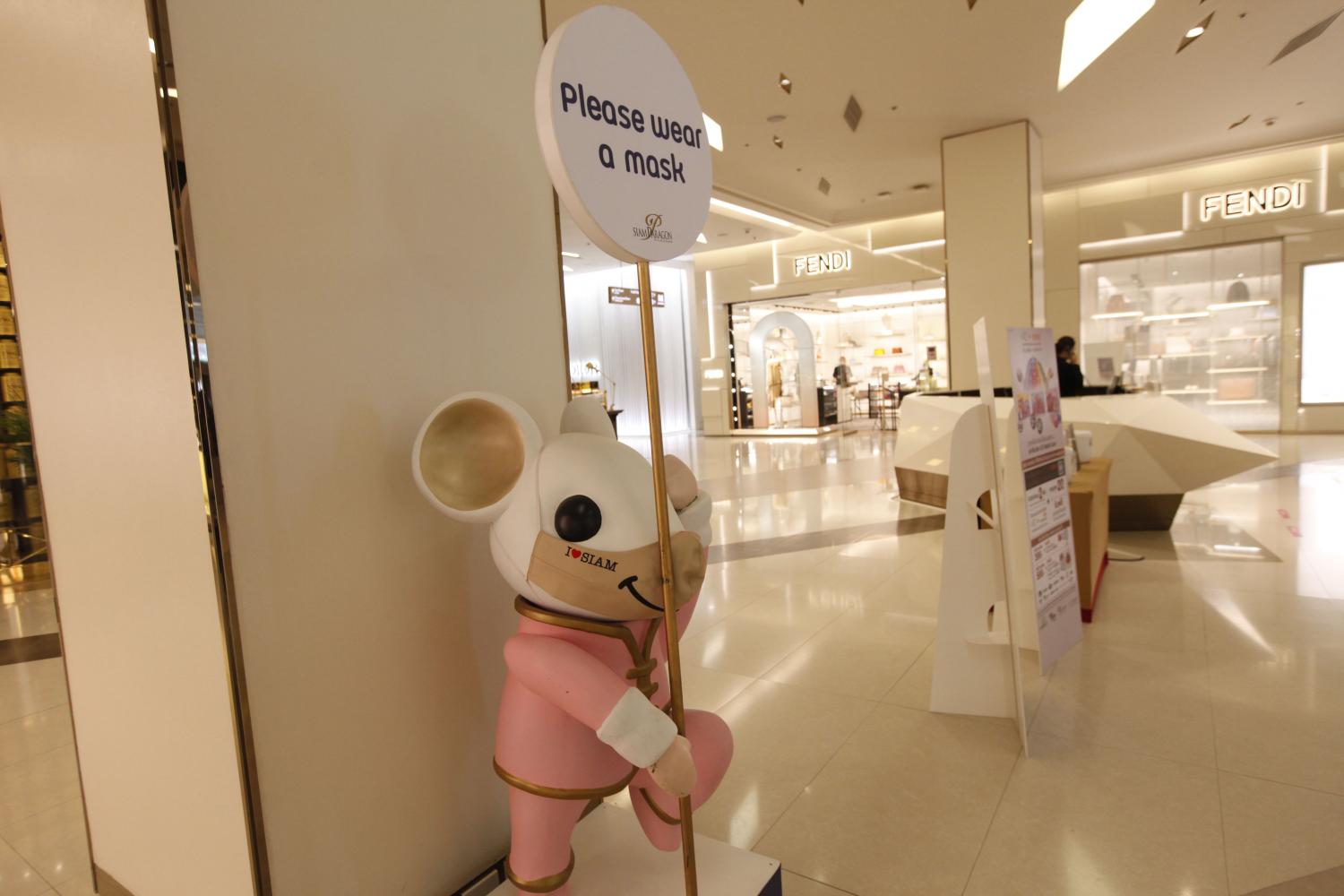 A sign reminds shoppers to wear a mask at Siam Paragon shopping mall which is nearly empty amid the third wave of Covid-19. Varuth Hirunyatheb

KBank temporarily closed several branches near these communities to spare staff and customers from the risk of infection.

He hopes the government and the Public Health Ministry can manage to contain the third wave of the outbreak.

The bank has been monitoring new infections and is ready to adjust its BCP in line with the situation.

The bank plans to maintain its work from home policy to curb risk for its operations and is exploring new workflows to reduce contact between employees.

He said banking businesses work with large amounts of sensitive data and KBank is under Bank of Thailand regulations and customer data protection rules. This means it is impossible to have all the staff work outside the office, as some types of work still require face-to face meetings at offices to ensure maximum output. 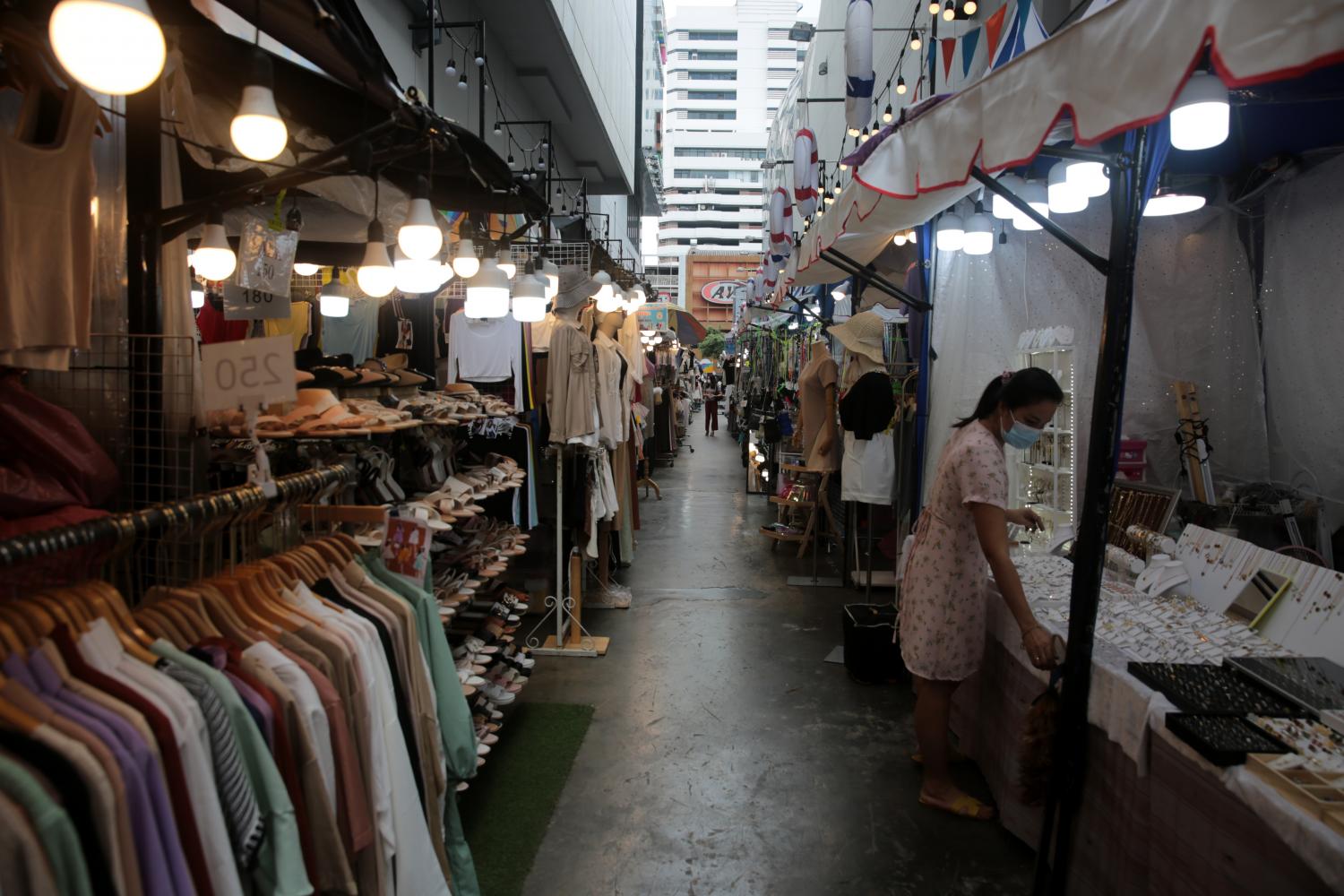 A row in the Pathumwan shopping district is free from foot traffic as many shoppers choose to stay away from public places. Chanat Katanyu

Somchai Sittichaisrichart, managing director of SiS Distribution Thailand, an IT product distributor, said the outlook for IT spending in the first half remains strong, with the likelihood of double-digit growth driven by the trend of remote work.

There continues to be a shortage of computers and smartphones as people want devices to receive the government's financial assistance through online means.

Although the hospitality and tourism sectors are reducing their spending, the majority of businesses and government agencies are not cutting IT investment as they gear up for digital transformation to improve their performance amid the pandemic, he said.

"However, in the second half, if the infection rate does not improve and more small businesses close while government financial aid runs dry, this will impact the IT industry, leading to either flat growth or a decline," said Mr Somchai.

The worst-case scenario is a strict lockdown, in which case SiS will focus on delivery, with workers staying at the firm's warehouses, he said.

Somsak Pejthaveeporndej, chief executive of VST ECS Thailand, a major IT distributor, said the industry could record flat or minimal growth this year.

"If there is a nationwide lockdown or curfew, which is unlikely to happen as the government would not have enough money for compensation, the company would have to reduce costs, including cutting salaries, minimising inventory and seeking cooperation with IT vendors for trade credit," said Mr Somsak.

In the first half this year, demand for computer devices remains intact, he said.

Thailand's largest mobile operator Advanced Info Service (AIS) said it is following its BCP since the first wave of the pandemic last year.

When the third wave hit, AIS implemented a work from home policy for all staff, except those in some roles, such as call centre employees.

For its work from home policy, staff must have devices or platforms for work, in addition to communication channels and psychological readiness to deal with activities based on online communication, according to AIS chief executive Somchai Lertsutiwong.

The worst-case scenario is a lockdown, and though AIS has prepared for it, Mr Somchai believes this situation is unlikely because Thais are steadfast about protecting themselves and purchases of various vaccines have begun.

A lockdown would take a toll on mobile operators' revenue streams, especially from shops or service centres in malls, he said.

He urged the government to draw up plans to help affected people quickly with proper remedy measures. 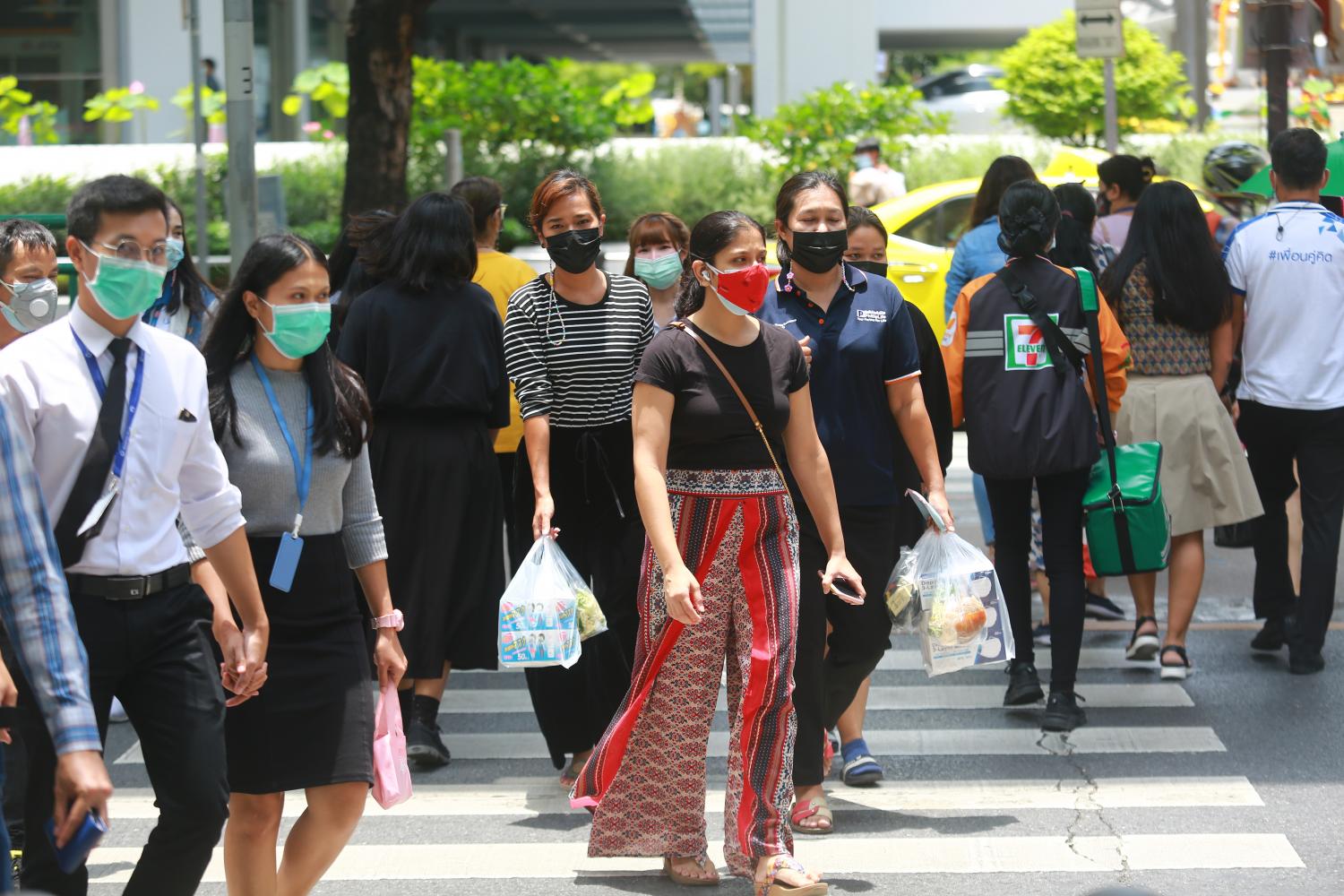 People are seen on lunch break hours at Silom Road amid the third wave of Covid-19 in the capital. Somchai Poomlard

The Public Debt Management Office (PDMO) is confident the country's fiscal status can cope with the economic impact caused by the new wave of Covid-19 that led to another round of business closures.

Thanks to Thailand's careful and conservative approach to managing debt, the country has kept the public debt lower than the fiscal sustainability framework ceiling of 60% of GDP.

PDMO projects the ratio will rise to 58.5% of GDP by the end of fiscal 2021 in September. That estimate includes the 1-trillion-baht emergency loan decree.

The ratio of 58.5% is based on a GDP growth projection this year of 1.9% made by the National Economic and Social Development Council in November 2020.

The council's forecast is lower than that of the Fiscal Policy Office, which recently predicted GDP to grow 2.3%, down from an earlier forecast of 2.8%.

Yet GDP forecasts have declined continually throughout the year as the pandemic worsens in Thailand.

Mrs Patricia said it is clear the public debt-to-GDP ratio at the end of fiscal 2021 would not exceed the 60% ceiling, unless the economic impact of the pandemic is more severe than expected, damping down GDP growth.

She said debt ratio may not be the most important issue, but rather the country's ability to service the debt.

One crucial factor to gauge the ability to service debt is the ratio of interest burden to government revenue, which is 7% in Thailand, lower than the international benchmark of 10%.

Mrs Patricia said whether Thailand would increase the 60% ceiling depends on the government issuing an additional emergency loan decree.

If the state decides to raise the 60% ceiling, PDMO will ask the government to do so at an appropriate level, she said.