An increase in foreign ownership quotas for condominiums from 49% to 70-80% should be allowed in specific locations and capped at units priced higher than 5 million baht to reserve supply priced lower than five million baht for Thais. 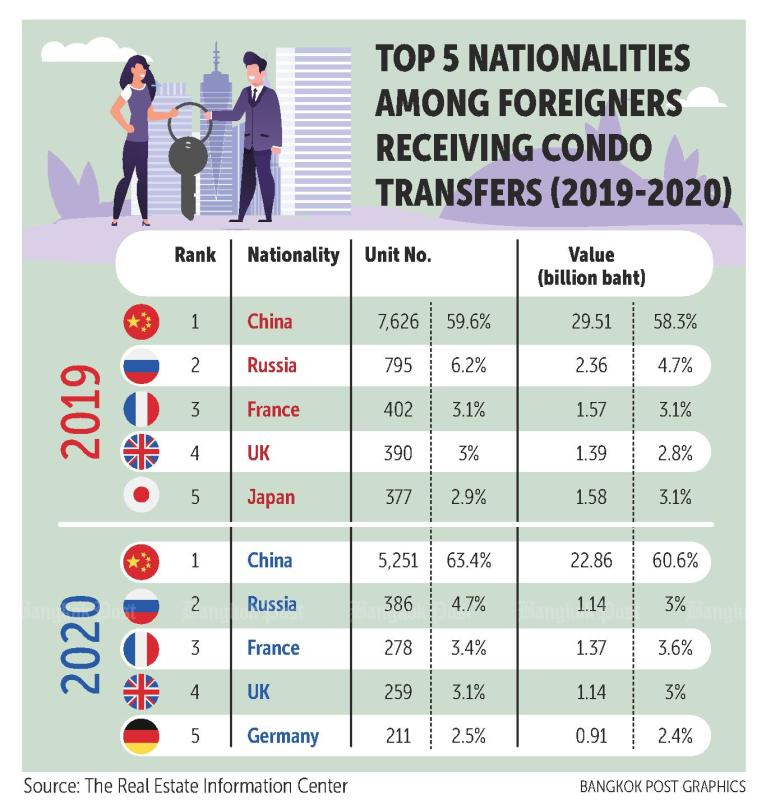 Vichai Viratkapan, acting director-general of the Real Estate Information Center, said foreign buyers in the condo market were interested in some areas, most of which were major provinces and tourist destinations.

"Overall, the proportion of condos nationwide transferred to foreigners remained lower than 49% of total ownership, a legitimate level," he said. "But in some areas, foreign demand is so high that the legitimate level is not sufficient."

Meanwhile, the proportion of foreigners receiving condo transfers nationwide was 9% by unit number and 14.7% by value, compared with Thais at 91% and 85.3%, respectively.

By unit price, a total of 26,879 units or 77.6% of condos transferred to foreigners during 2018-20 were those priced lower than 5 million baht, however, this price range accounted for only 7.7% of total condos transferred.

"The majority of condo purchases by foreigners were priced lower than 5 million baht a unit which was in the same bracket as the majority of local purchases. As supply in this segment remained large, so the proportion of foreign buyers was lower than 10%."

To reserve affordable condos for local buyers, an increase in foreign ownership quotas for condos to higher than 49% should be applied only in some locations and for units priced higher than 5 million baht, Mr Vichai suggested.

"If the increase is allowed, there should be protection for Thai owners in each condo juristic person, concerning living which matches Thai culture and norms," he said.

Mr Vichai suggested the protection could be done by limiting foreigners' voting right in juristic persons.

This also can help protect a quick rise in housing prices.

Like condos, a foreigner's voting right in a juristic person for a low-rise housing project should be limited at not higher than 49%.

Earlier in March, the government floated the idea of promoting Thailand as a second home by attracting foreigners to buy residential units under both freehold and leasehold contracts.

Prime Minister Prayut Chan-o-cha has dismissed the results of the Bangkok governor and councillor polls, saying they don't reflect his political popularity.