The value of investment projects submitted under the Board of Investment (BoI) tax incentive programmes skyrocketed by 80% year-on-year to 123.36 billion baht in the first quarter, driven mainly by the pandemic and subsequent measures to curb the spread of the virus, including a work-from-home guideline. 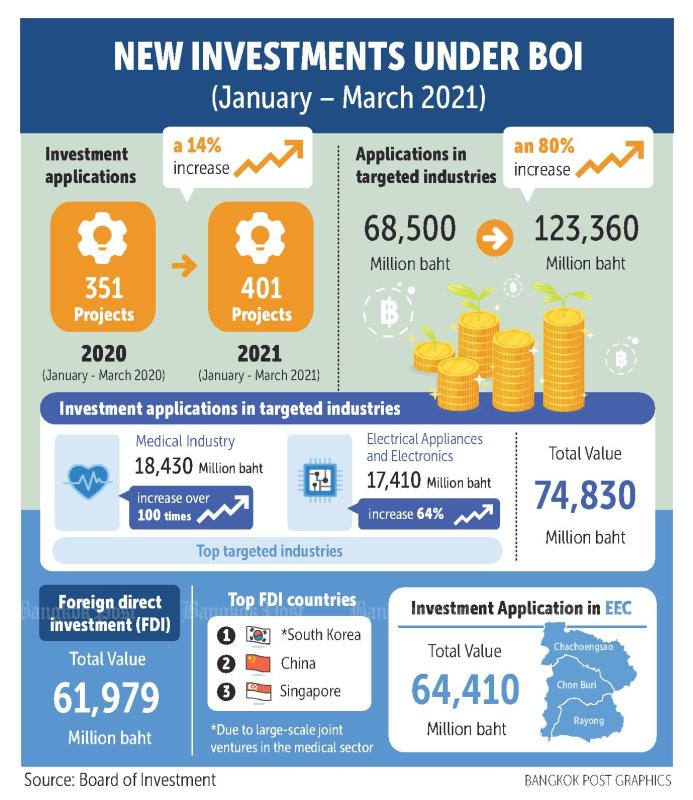 From January to March, the BoI saw the number of applications for new investment projects increase 14% year-on-year to 401. Medical devices, home appliances and electronic equipment were the most attractive categories to investors.

Total investment value stood at 68.50 billion baht, with 351 investment applications in the first quarter of 2020, according to the BoI.

Besides the pandemic factor, investors' interest in S-curve industries as well as the relocation of investment projects from China to Asean also contributed to the investment growth in Thailand, said Ms Duangjai.

Total investment value in the Eastern Economic Corridor (EEC) rose by 39% year-on-year to 64.41 billion baht, with Rayong coming first with 29.43 billion baht, followed by Chon Buri with 24.97 billion baht and Chachoengsao with 10.01 billion baht, she said.

Of the total, up to 21 projects worth 5.63 billion baht involve energy conservation and alternative energy utilisation, aimed to minimise environmental impacts.

Some 16 projects valued at 2.47 billion baht are machinery upgrades and replacement. Another two worth 300 million baht are related to research and development and engineering.