Move comes amid concern over risks

The Brooker Group's (BROOK) unprecedented filing to the Securities and Exchange Commission regarding its investment in cryptocurrencies marked the first time a Thai-listed company publicly announced its cryptocurrency holdings amid growing concerns over investment risks associated with these emerging assets. 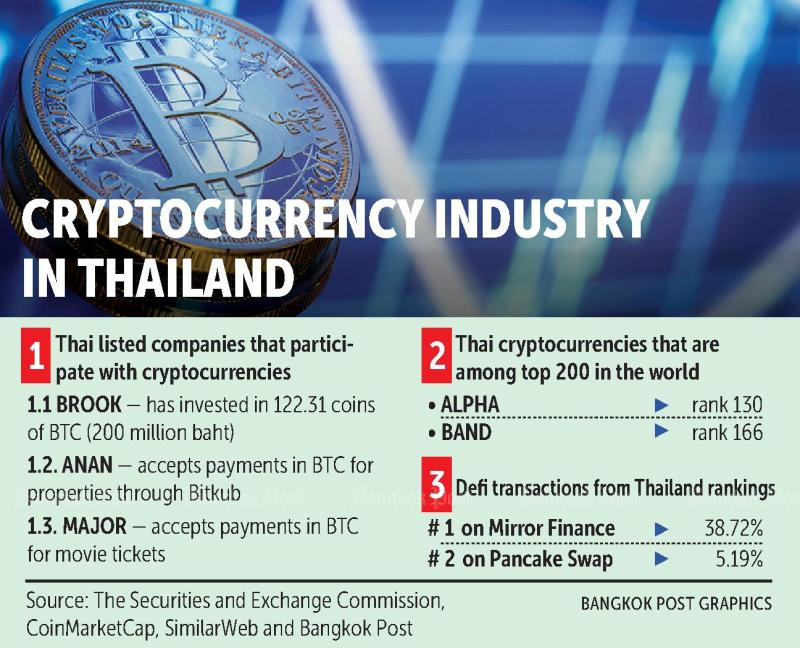 Before BROOK's direct investment in cryptocurrencies, Thai-listed companies were publicly participating with cryptocurrencies only by accepting cryptocurrencies as a payment method for their goods and services such as Ananda Development Pcl and Major Cineplex Group Pcl who started accepting bitcoin payments earlier this year.

The Securities and Exchange Commission (SEC) said if investments in digital assets cause significant changes in the company's profits or asset sizes, the company should disclose details regarding their cryptocurrency holdings to the SEC and the public, said SEC secretary-general Ruenvadee Suwanmongkol.

"Listed companies' decisions to invest in any asset class, including digital assets, is entirely up to the company's board of directors who must make investment decisions with caution and responsibility," she said.

Digital assets can expose investors to high investment risks. The company's board of directors therefore has the responsibility as enshrined in Section 89/7 of the Securities and Exchange Act to be especially cautious when investing in high-risk products.

BROOK disclosed the information regarding its investment in cryptocurrencies on Monday night. The company announced it has bought 122.3158 bitcoins worth US$6.6 million or 200 million baht through the US-listed digital asset exchanges in the first quarter this year via its subsidiary in Hong Kong.

The company reported that the board approved the investment with the maximum limit of up to $48 million or about 1.5 billion baht.

The company also recommended its existing and prospective shareholders to consider the risk in price fluctuation as the company may invest up to 50% in digital assets in the future.

BROOK's investment in cryptocurrencies is the company's strategy to diversify into various digital assets, not only bitcoin and its peers, but also stablecoins.

Palakorn Yodchomyan, co-founder and chief executive of KULAP, said many large companies tend to hold bitcoin and other altcoin to hedge against a weakening dollar and rising inflation.

Earlier this year, Tesla also invested about 7% of its cash in bitcoin.

He said Kulap, as a digital asset intermediary, also invested about 8% of the company's cash flow in cryptocurrencies, claiming the investment is equivalent to property developers holding 'landbank' for future business.

Mr Palakorn said in addition to private companies, many Thai retail investors, including inexperienced ones are also flocking to the digital exchanges including the advanced cryptocurrency investment called 'defi farming' in hopes to obtain wild gains from digital assets even though they expose investors to higher risks, especially cyber risks.

As of April 26, Thailand has 12 licensed digital asset intermediaries in operation, including four ICO portals. There are currently a total of 697,780 digital trading accounts registered with the local exchanges.

Thailand is among the countries with a well-developed cryptocurrency ecosystem in which there is a specific law to support and regulate local digital asset businesses and mandate clear law enforcement.

However, despite the regulations, many global regulators still have concerns about risks from price fluctuations caused by the inherent volatility of this new emerging asset class.