Exposing the cracks within tourism
Business

Exposing the cracks within tourism

Walking Street in Pattaya, which is usually full of tourists, is nearly deserted because of fear of Covid-19. (Photo: Nutthawat Wichieanbut)

The global pandemic has revealed weaknesses hidden within Thailand's tourism strategy for decades.

Deserted walking streets and shuttered hotels can be found everywhere today with no sign of recovery in sight, as 80%-90% of tourism-related businesses have closed because of the lack of foreign visitors. This market contributed up to two-thirds of the industry's total revenue before the pandemic.

The plan to reopen borders for inoculated visitors in 10 areas this year is a gamble to remedy a bruised industry, yet there will be greater risks if obstacles are ignored.

The National Economic and Social Development Council (NESDC) this week slashed its estimate for foreign arrivals this year to just 500,000, expected to generate 150 billion baht. This figure is three times less than domestic receipts booked last year of 480 billion baht. 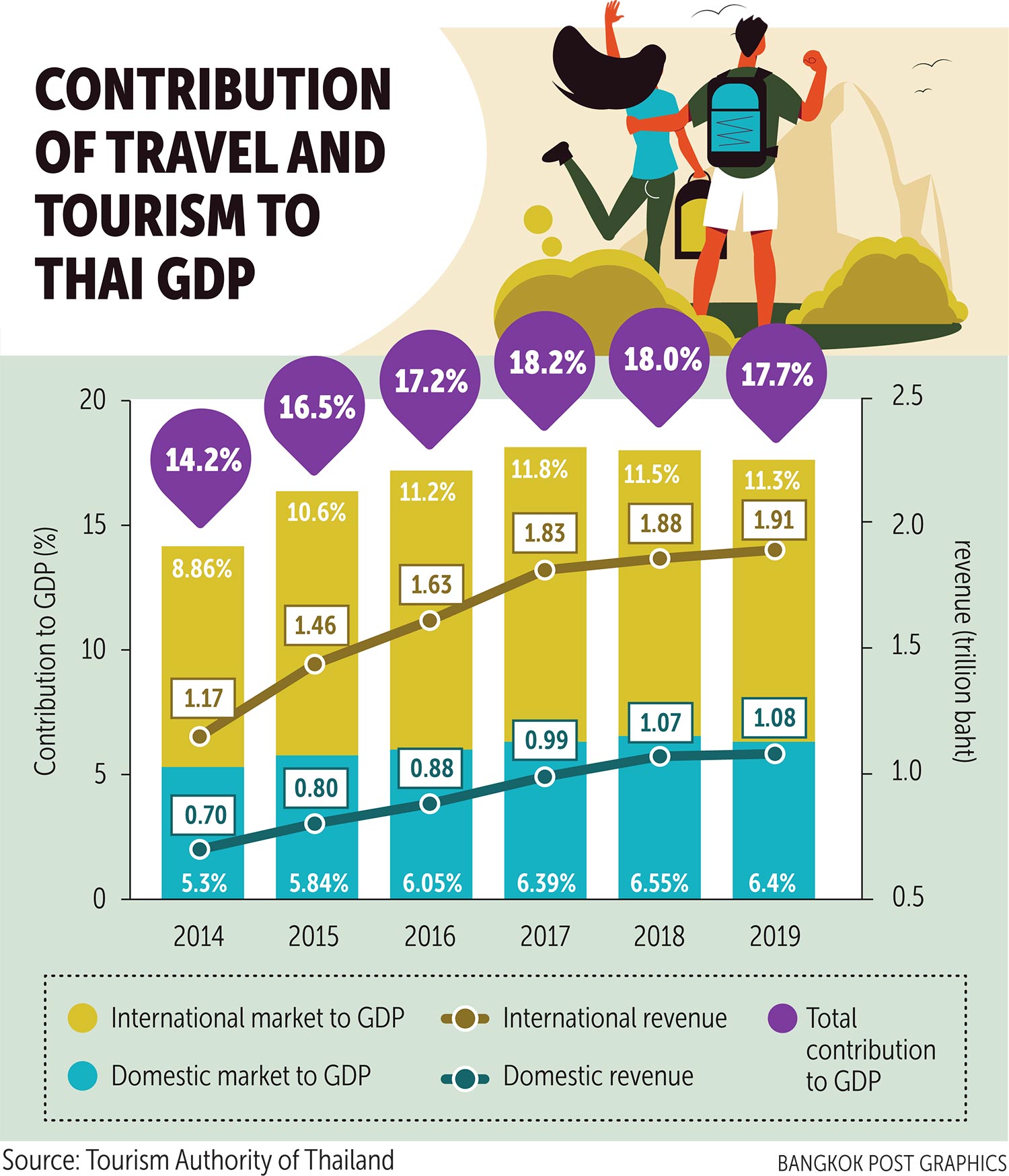 While many countries are looking for sustainable methods to make the domestic market and economy stronger, the Thai tourism industry is still dreaming of the good old days of 40 million annual visitors.

GET SOME OR LOSE ALL

A safe reopening can work if both tourists and local residents are vaccinated against Covid-19.

However, due to the slow pace of vaccination and insufficient supplies, the country has been unable to achieve herd immunity.

Instead, the country has chosen pilot areas to reopen to foreign tourists gradually, enabling those areas most eager for the international market to allow vaccinated tourists entry without quarantine.

Phuket is scheduled to waive mandatory quarantine for inoculated tourists from July 1, and has already started screening entries.

A condition of the pilot scheme is the Andaman island must achieve herd immunity by June, helping to ensure the share of inoculated residents stays at 70% in the long run.

Since the third outbreak erupted in April, the province has implemented stringent measures, requiring domestic travellers to be fully vaccinated or provide a negative test prior to arrival.

As a result, long lines caused people to wait for hours at a land entry point this week as people complained about the inconvenient entry process and pricey Covid-19 tests.

However, stern travel rules are not the only hurdle facing the tourism market.

Local tourists wary of virus transmission may avoid destinations opening up to foreigners without quarantine.

And if Thais are vaccinated and free to travel to other countries open to tourists, some Thais may opt for international trips.

"Facing hesitation from residents is unavoidable when reopening some areas to international arrivals," said Yuthasak Supasorn, governor of the Tourism Authority of Thailand (TAT).

"We have to consider the risk as well as the sentiment of Thai tourists."

He said the lessons learned last year allowed tourism operators in Phuket to make an informed choice on pilot reopening to foreigners without a quarantine.

The island struggled to attract the domestic market as 80% of hotels closed down, with the remainder posting only 20-30% occupancy.

Those who could afford to travel had high purchasing power, as Thailand averages 12-13 million outbound tourists a year, but they were not allowed to go abroad last year.

Thailand has a population of 70 million, with 4.3 million people still living in poverty in 2020, according to a report by NESDC in 2020.

The majority of the population is struggling with the economic impact of the pandemic.

"The structure of Thai tourism has leaned towards the international market for too long, and this has proved difficult to change," said Mr Yuthasak.

"In 2022, we want to close the gap by targeting revenue of 1.2 trillion baht from the Thai market and 1.3 trillion from international arrivals," said Mr Yuthasak.

"But in the end, no matter the market, if the country cannot improve the supply of tourists by improving public transport and reducing the number of travel scams, it will be hard to win back tourists like in the past."

While tourism operators in Thailand struggle with scarcity, China -- the first country in the world to detect Covid-19 -- has reported only single or double-digit infections for several consecutive months.

"Tourism, meetings, trade shows and concerts are back to normal. Being unable to travel out of the country is not a problem for the Chinese as they flock to domestic destinations that provide a unique experience, similar to travelling abroad," said Phisut Itsaracheewawat, a Thai who works for a tech company in Shanghai.

"Vaccination rollout has been fast for both local residents and expatriates like us, who were able to book appointments online and get Sinopharm jabs at a cheap price last month."

Domestic tourism in the mainland, which has benefitted from stringent border controls, has seen demand surge.

The number of local trips taken in China is estimated to surpass the pre-pandemic period from May.

Trip.com Group, a Chinese travel company formerly known as Ctrip, predicted domestic travel in China during the five-day May Day Holiday would grow 30% when compared with the same period in 2019, and soar 270% year-on-year.

A robust domestic recovery might be good news for China, but the Thai tourism industry had become dependent on that market, welcoming 10.9 million Chinese visitors in 2019 -- one-fourth of foreign arrivals.

From 2020 until now, Beijing has not provided any hint it is easing outbound travel restrictions.

Sisdivachr Cheewarattanaporn, president of the Association of Thai Travel Agents, said it is hard to imagine Chinese tourists coming back this year as the country has developed a strong, self-dependent tourism market with a population of 1.4 billion to draw from.

"We do not expect the Chinese government to relax international travel in the near future," said Mr Sisdivachr. "Look at Hong Kong, which is close to the mainland and has handled the virus crisis better than us, yet Chinese people still have to quarantine when returning from Hong Kong."

Thai tourism operators hope the situation improves by the fourth quarter, but many have learned during the past year not to dream too big.

Anchalee Kumwong, director of TAT's Beijing office, said China is unlikely to reopen the country before at least 70% of the population is vaccinated, which is expected to happen by early next year.

In addition, there has been no official commitment from the Chinese government about travel bubbles with other countries.

"Chinese tourists still think about overseas trips," she said. "Tourism marketing campaigns from every country, including Thailand, Japan, Singapore and Macau, are intense despite international travel restrictions as we all want to maintain this market."

With rigid restrictions such as 28 days quarantine upon return to China from overseas and limited international flights under its "Five-One policy" from last year, it is near impossible to expect Chinese tourists to take part in the Phuket sandbox model in the second half of this year, said Mrs Anchalee.

The Five-One policy allows an airline to fly from one city in China to one foreign destination, with no more than one flight a week. As a result, there are 180 seats available per week from Beijing to Bangkok, down from 40,000 seats prior to the outbreak.

She said the methods Beijing has applied to remedy the tourism industry there are interesting.

Instead of spraying cash without direction, it adopted technology to facilitate users shopping with digital vouchers in designated areas, or required tourists to withdraw stimulus money from ATMs at destinations that are desperate for more tourism traffic.

Mrs Anchalee said the country also developed tourism destinations to fulfil demand, such as promoting Hainan island as a duty-free destination to attract high-spending tourists as well as offering luxury experiences including yachting.

"More Chinese flocked to Hainan for a beach holiday, Yunnan to explore model cities duplicating sites in Thailand, and Xinjiang where desert tourism is booming. They have plenty of substitutes for overseas trips," she said. "That's why they have been able to grow the domestic tourism market more than us."