SPV77, a special purpose entity set up to issue and offer Siri Hub Investment Digital Tokens (SIRIHUB) with a four-year maturity to investors, serves as the token issuer, while SE Digital Co serves as the main ICO portal.

SPV77 is planning to channel 1.568 billion baht raised through the offering to invest in revenue sales and transfer agreements (RSTA) owned by Siripat Four Co, while 832 million is allocated to buy a 100% stake in Siripat Four.

Siripat Four owns the rights to Siri Campus office buildings, the underlying assets used to back the SIRIHUB tokens.

After the ICO, all shares of Siripat Four are slated to be transferred to MFC Asset Management Plc, the potential trustee, to protect investors' rights.

Siripat Four, the property owner and current lessor of Sansiri Campus, is to receive funds from the ICO, which will then be used for loan repayment. 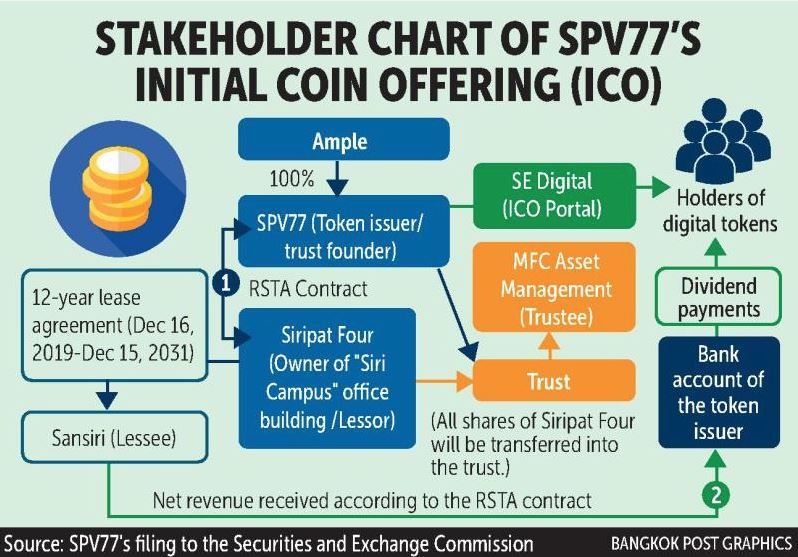 The white paper SPV77 filed with the SEC does not specify the portion Sansiri is investing in this token project.

Token holders are expected to receive dividend payments from quarterly revenues generated by the management of Sansiri Campus.

This mechanism in the ICO resembles payments for a real estate investment trust (REIT) or a property fund, something with which most investors are already familiar.

Tranche A token holders are the first group of investors to receive redemptions and have voting rights to dispose of the project's assets, while tranche B holders have no voting rights.

Investors can purchase digital tokens from one or both tranches of SIRIHUB, with a minimum subscription value of 10,000 baht.

Tokens in each tranche will be allocated to investors in accordance with the order of their payments.

The value of total coins distributed to retail investors is not to exceed 70% of the total offering worth 1.68 billion baht, according to the white paper.

Retail investors are allowed to invest up to 300,000 baht in the tokens, according to rules set by the SEC.

The tokens are slated to be listed on ERX Thailand, a digital asset exchange specially set up for the trading of digital assets and tokens, excluding cryptocurrencies.

Ruenvadee Suwanmongkol, secretary-general at the SEC, said a number of private companies are consulting with the SEC about their own digital token offerings.

ICOs are gaining traction as an alternative source of funding in which technology is used to facilitate fundraising in the real estate sector.

She said in addition to real estate-backed ICOs, there are three other methods to invest in real estate: direct purchase, buying shares of a property company, or through a REIT.