Fighting back against exploitation
Business

Fighting back against exploitation

As food delivery platforms continue their battle for regional supremacy, drivers and restaurants often become the victims of an intense price war as there is little organised opposition or help from the state

Motorcyclists including a Grab and Line Man driver are seen in the Klongtoey district of Bangkok. (Photo: Somchai Poomlard)

As sharing economy tech companies plot major mergers and initial public offerings (IPOs) this year, they are running into problems in Thailand as the state, labour organisations and restaurateurs attempt to push back against the exploitation inherent in their business models.

Food delivery companies like Grab, Foodpanda, Gojek and Line Man (all based outside Thailand) have reaped enormous revenues due to the pandemic, normally in line with rises in Covid-19 infections. However, they have failed to achieve profitability as the winner-take-all battle to become the primary delivery platform of Southeast Asia drives up costs.

Even with the industry standard of 30% commissions charged to restaurants and 15% to drivers, companies are complaining of an inability to make a profit and remain unwilling to increase rates for endpoint customers, fearing a loss of market share.

"These platforms get money from restaurants, riders and consumers -- from so many sides they make profit," said Akkanut Wantanasombut, a researcher at the Institute of Asian Studies at Chulalongkorn University who works with delivery drivers to organise collective bargaining.

"But the treatment of these different stakeholders varies with drivers and restaurants squeezed the most while consumers are left unchallenged."

Last month, the Department of Internal Trade (DIT) requested that food delivery platforms drop the cut taken from restaurants to 15% to aid struggling businesses hit hard by the third wave of Covid-19 infections, resulting in government restrictions on operations, similar to moves made by cities in the US to cap rates.

However, in Los Angeles, this was done through regulation but the Thai government is simply making a request to these tech firms.

The companies responded with a series of complicated counter proposals that will be in effect throughout June only.

Grab, the Singapore-based market leader will offer rebates on commission for the first 100 orders to restaurants for the month of June, with restaurants given one week to sign up -- ending today -- for the programme.

Gojek, based in Indonesia and Grab's main regional competitor, in turn, will drop commissions from 30% to 25% or apply a commission reduction for customer discounts.

Line Man, the delivery arm of Japanese-based messaging app Line, will also drop its rate from 30% to 25% for the month of June.

Meanwhile, Foodpanda, a subsidiary of a German company that operates different food delivery platforms around the world, will drop its restaurant commission rate to 25% for June for restaurants in the "red zone" (Bangkok, Nonthaburi, Samut Prakan and Pathum Thani). It will also offer a no-fee deal for the first 15,000 small restaurants that register on the platform in June.

Such calls to cut fees and be more equitable corporate citizens amid the worldwide crisis comes at a time when these firms have massive mergers and IPOs planned this year and are being pressured by investors to speed up paths to profitability.

Most major players in the market have big plans for 2021, either by merging with other large tech companies or IPOs expected to raise billions of dollars.

The largest deal slated for this year is Grab's IPO on the New York Stock Exchange (NYSE) with a valuation of about US$40 billion (1.2 trillion baht), making the firm Southeast Asia's largest startup.

The IPO will be conducted through a merger with a special purpose acquisition company (SPAC). This is a new financial instrument in the IPO world, in which a shell company is created and lists on the stock exchange in order to raise considerable funds to buy up a tech company and launch their IPO.

However, Altimeter Growth Corp, the SPAC company set to merge with Grab, saw the value of its shares on the Nasdaq drop from $15.22 per share to $11.79 as of Tuesday, following the announcement of the deal back in April, reflecting concerns among investors of the viability of SPAC deals that have developed into a frenzied investor trend this year.

Not to be outshined, Line also plans to merge with Z Holdings Corp, the operator of Yahoo Japan, while Gojek will merge with another huge Indonesian tech giant, Tokopedia, in an $18 billion deal to create "GoTo Group". 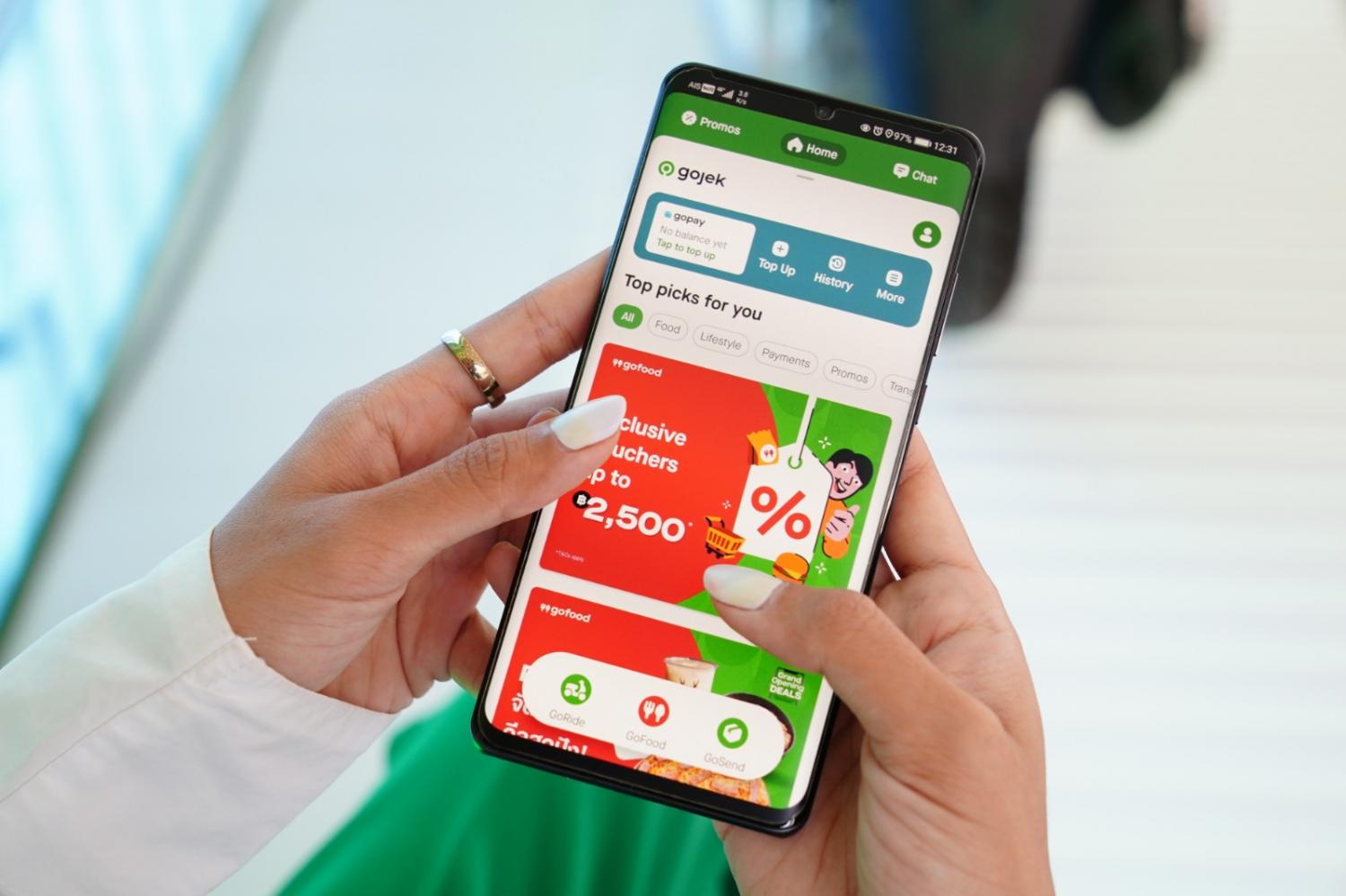 The user interface of the Gojek app.

Looming large among these market-disrupting deals is Softbank, a Japanese investment bank that has pumped billions into promising startups around the world in partnership with the controversial Saudi Vision Fund. Softbank is Grab's largest shareholder while Z Holdings Corp is a subsidiary of the bank.

Softbank has been one of the main victims of an intense turf war in Southeast Asia (besides restaurants and drivers) among delivery companies and had previously pressured Grab and Gojek to merge but the deal fell apart in negotiations.

This cut-throat competition is hampering the startups' path to profitability as they must sink money into providing customer promotions and expansion activities, requiring more and more funds to edge out rivals.

"These companies rack up losses because they want to expand forever," Mr Akkanut said. "But when you invest and invest, you will never make a profit." 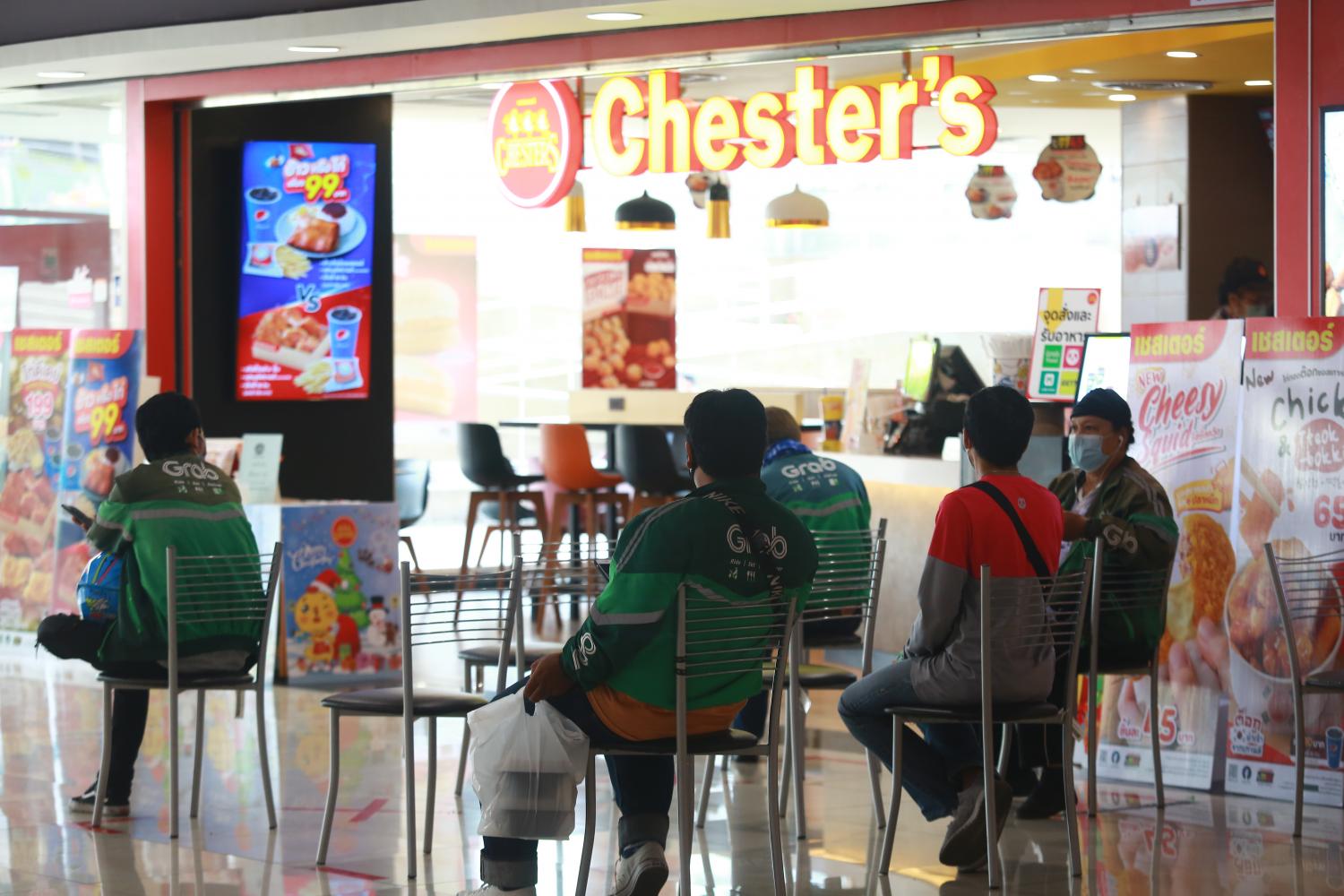 Food delivery drivers wait to pick up orders at a department store during the pandemic. (Photo: Somchai Poomlard)

These food deliveries startups are an emblem of the current neoliberal economic order that has allowed rapacious capitalism to dominate unchecked by organised labour.

Despite semi-frequent protests by drivers against their corporate employers, delivery drivers are not considered employees and are unable to receive benefits like formal workers such as social security.

Efforts to form driver unions have languished amid an overall weak labour movement in the country. The nature of the platform economy alienates workers that do not share a workplace or boss (drivers handle disputes through a call centre), but only the jacket they wear. Hence, these workers often organise through Facebook groups to call for protests and raise money for families of riders killed on the job.

Last year, Grab drivers protested in front of its headquarters in Bangkok demanding more transparency among its incentive programme that rewards drivers for completing more deliveries within certain time periods. 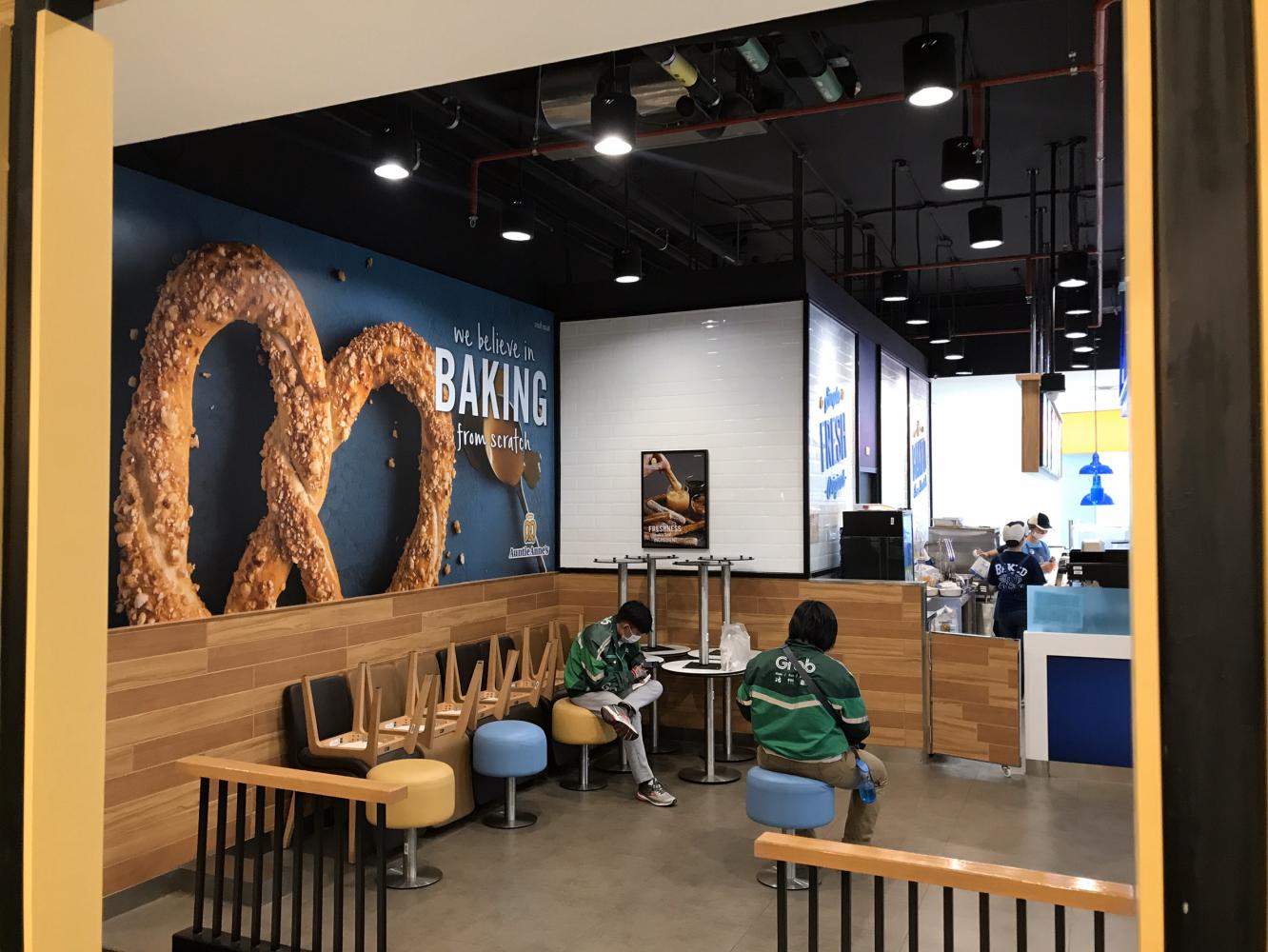 While the company has not decreased driver pay, typically 40 baht for the first four kilometres and an additional rate per extra kilometre depending on the region, it has found other ways to cut costs. Grab recently introduced a system that directs its drivers to pick up multiple orders per trip but pays them only 20 baht for the second order. The policy has also drawn ire from endpoint consumers complaining about long wait times as drivers must go to two restaurants and two drop-off points, potentially doubling delivery time.

Line Man drivers also protested this year after its contract with Lalamove ended, which previously stipulated the delivery company pay 62 baht for the first four kilometres. However, after the end of its contract, Line Man dropped driver pay to 50 baht for the same distance and drivers congregated around Wongnai's headquarters, the food directory startup Line Man merged with last year.

The action prompted Line Man to raise the rate to 55 baht, a rare modest victory for local workers against foreign tech platforms. 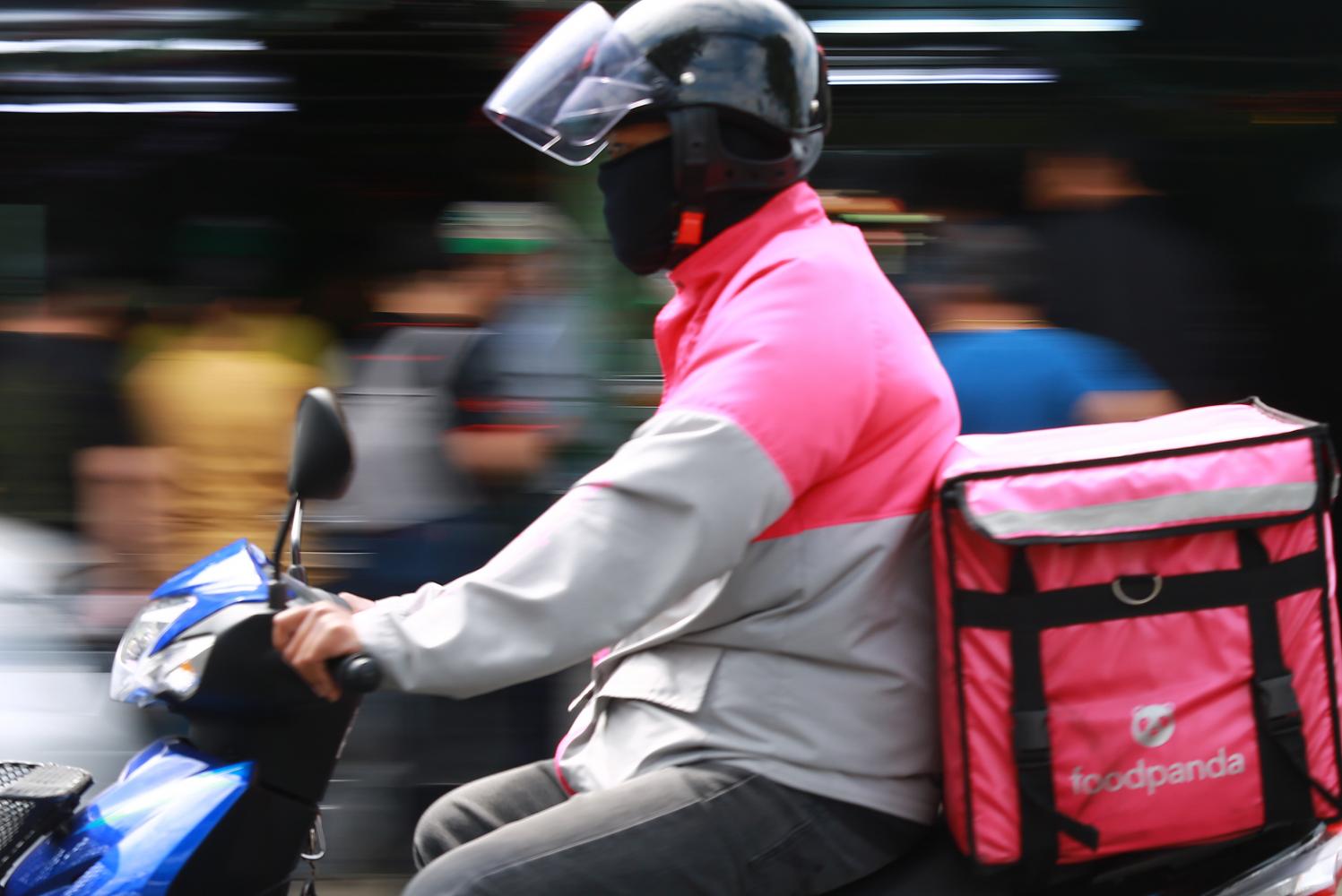 A Foodpanda rider on his way to deliver food. (Photo: Somchai Poomlard)

Restaurateurs can also benefit from some form of organised opposition against these companies to negotiate better rates, although collective bargaining is a concept anathemic to more capitalist-minded small business owners.

"The Thailand Restaurant Association could do more to help these restaurants organise against companies but it usually deals with protecting businesses against state actions," Mr Akkanut said. "Small restaurants, many of whom are just one person selling from a cart, are powerless to negotiate."

The app charges no commission fees to restaurants while it pays drivers a competitive rate of 40 baht for the first kilometre and then 10 baht for each additional kilometre.

The bank sees its project as an act of corporate engagement, hoping to put pressure on foreign delivery companies to lower their own rates after its CEO heard complaints among local food stalls of being crushed by 30% gross profit (GP) after the onset of the pandemic.

SCB invested 150 million baht in the creation of the app last year and has since attained about 1 million downloads. It currently facilitates about 18,000 transactions per day and has around 93,000 merchants signed up to its platform and 15,000 drivers.

"Our goal is not to be as big as Grab -- that would take a massive amount of investment that we are not prepared to spend," said Thana Thienachariya, chairman of Purple Ventures, an SCB subsidiary tasked with operating Robinhood. "Instead we hope to build a sense of brand loyalty among restaurant owners through our fair business model."

While the company will probably not turn a profit anytime soon with the app, Robinhood serves as a way to drive new account creations at SCB. Each merchant and driver using the app must have an SCB account to facilitate transactions and because the bank handles the money, the stakeholders are able to receive payments within one hour as opposed to up to 15 days from competitors.

Mr Thana estimates that SCB has managed to open 140,000 new accounts and merchants due to the app.

The project represents a form of civic nationalism by Thai corporates to push foreign multinationals to improve conditions for local workers and SMEs.

"I come from the telco industry where some of the smaller players charge lower rates than the big three and even though they do not have a large market share, they push the large companies to charge lower fees," he said. "We normally just plant trees or build a school, but this could be a more interesting way to give back to the community."