Tourism aches for shot in the arm
Business

Tourism aches for shot in the arm

Industries are hopeful the arrival of vaccines can revive their fortunes, but the government has a patchy record in handling vaccination

The atmosphere at Bang Sue Grand Station, which can accommodate up to 10,000 people per day for vaccination. (Photo by Varuth Hirunyatheb)

Thailand's economy relies on exports and to a lesser extent tourism. With the arrival of large shipments of vaccines, business leaders hope the economy finally has a salve.

Rollout of the state's mass vaccination scheme has been slow and the government's vaccine procurement strategy -- relying on local production instead of making early deals with countries already capable of producing vaccines -- has been widely lampooned.

The longer it takes to achieve herd immunity (estimated at 70% of the population vaccinated), the more time and business hotels and restaurants will lose as customers stay away.

Tourism operators have shuttered their businesses and factories laid off workers to maintain solvency, making it more difficult to reopen on schedule.

The country lost its formerly impressive capacity of hotel rooms, taxis and eateries, with some major tourism destinations turning into ghost towns that will take years to rebuild.

Much is riding on the June 7 vaccine acceleration deadline, when Thailand is expected to finally begin local production and receive a large dose of AstraZeneca imports.

Yet the government has shown little ability to handle the vaccine rollout, with a number of Thai provinces forced to delay their jab administration because they received fewer doses than expected from the Public Health Ministry. The Chulabhorn Royal Academy said on Friday it is postponing its vaccination service because the government has not sent it any doses. 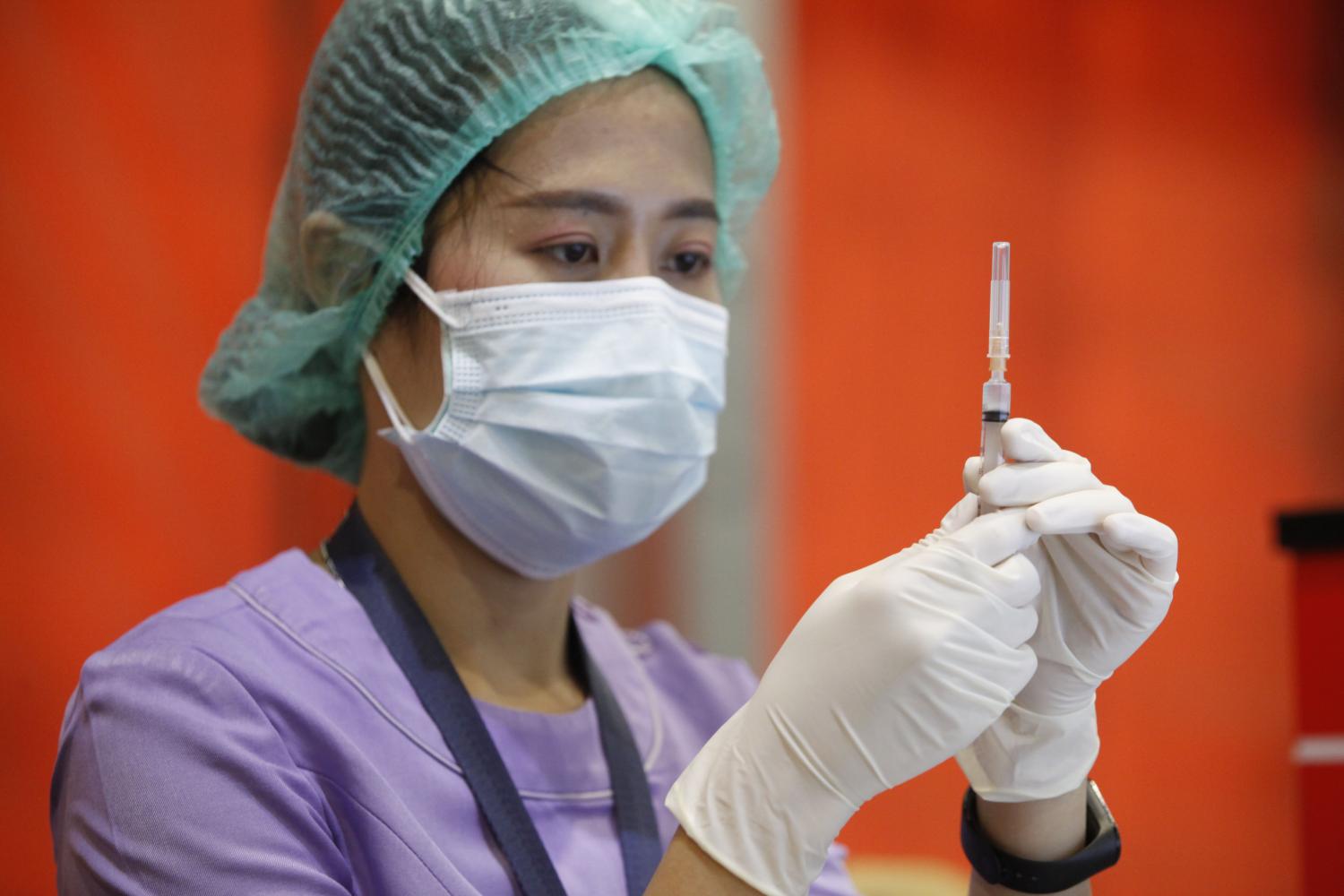 A nurse prepares a dose of the Covid-19 vaccine at Central Lat Phrao.  Varuth Hirunyatheb

ALL ABOUT THE JABS

While Phuket is hopeful it can reach a herd immunity level of 70% of the population vaccinated ahead of its planned reopening to inoculated tourists on July 1, other tourism destinations are waiting desperately for a comprehensive vaccine rollout amid rising infections.

Ratchaporn Poolsawadee, president of the Tourism Association of Koh Samui, said it is unclear when Koh Samui will reach herd immunity.

He said if the government distributes enough vaccines, operators can promote the safety of the destination to both international and domestic markets, as well as prepare operating procedures to welcome back tourists.

Koh Samui has the capacity to deliver 5,000 vaccine shots per day.

"The Samui Sealed Route for travellers has to move forward with its reopening plan in the second half, despite the possibility of a vaccination delay," Mr Ratchaporn said.

The number of tourists in the first month of the scheme could be less than 1,000, but demand will increase when more international flights, apart from Bangkok Airways, add service, he said.

Meanwhile, Punlop Saejew, president of the Tourism Council of Chiang Mai, said there is no update on vaccine distribution to Chiang Mai, even though herd immunity is a requirement for the sealed route scheme slated for August and the sandbox model in October.

The uncertainty about vaccines is attributed to limited supplies as the country tries to fight back a third wave of the pandemic.

He said curbing the outbreak with mass vaccinations, especially in epicentres such as Bangkok and nearby provinces, "is crucial" as tourists are unlikely to visit sandbox provinces if the country is suffering from high rates of infections.

The Chiang Mai sandbox requires around 280,000 doses for its population of almost 130,000 to reopen the whole province. The vaccination rate in the city is currently 14,000 doses per day.

"In addition to vaccines, which is the first step for a tourism revival, there are many other factors necessary for a successful sandbox," he said.

"Thailand's largest tourism market, China, is still imposing a ban on outbound travel. We have to stick with the plan as there are other markets like South Korea and Singapore that still have potential."

If the reopening plan cannot proceed and Chiang Mai misses out on foreign tourists for the upcoming high season, the province hopes to at least attract local tourists during the period to support operators, said Mr Punlop.

During the pre-Covid period, the domestic market accounted for 70% of overall tourists to Chiang Mai. Average spending for domestic tourists was 2,500 baht per person per day, half that of foreigners. 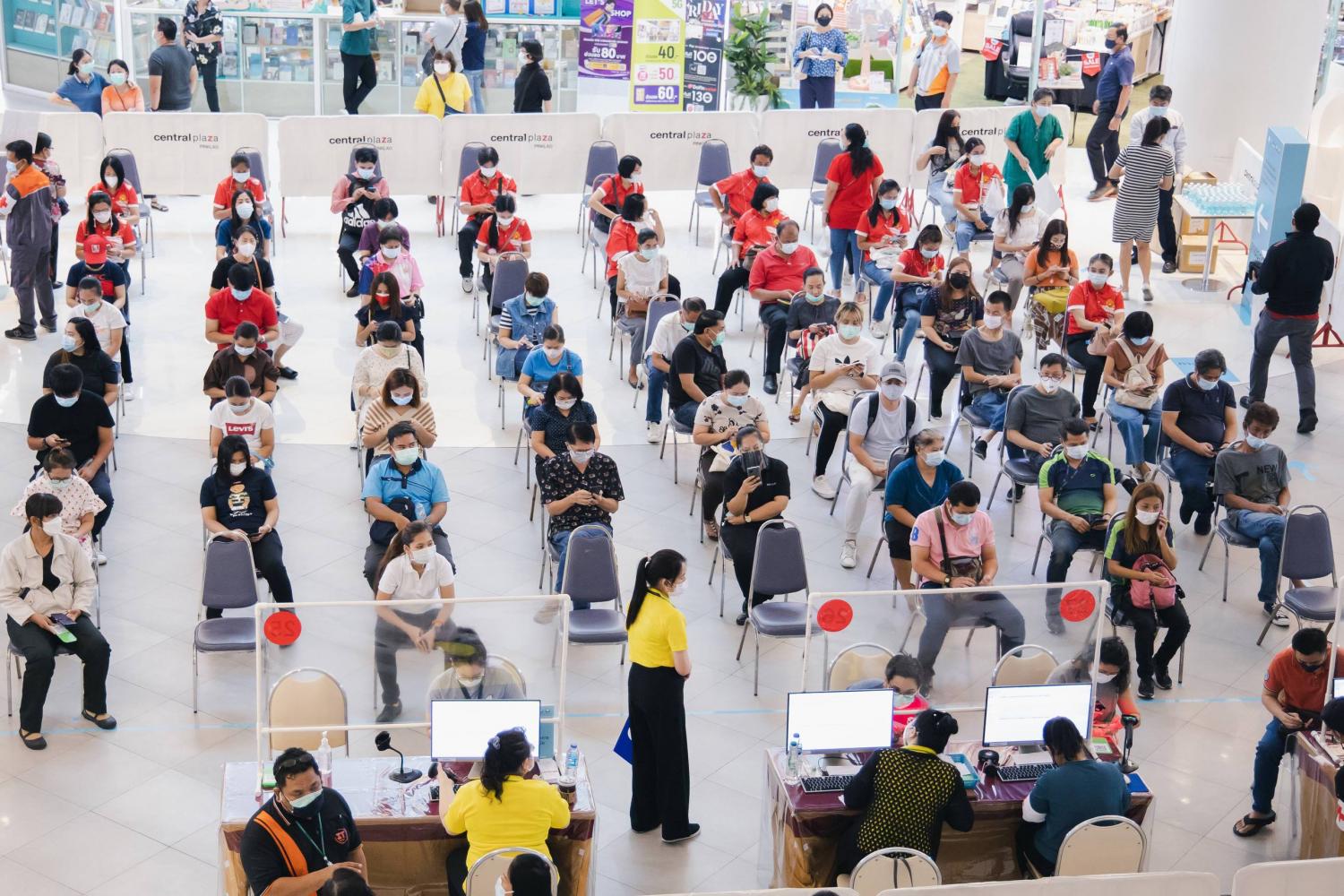 People wait to receive Covid-19 jabs at CentralWorld in Bangkok.

Chaichan Chareonsuk, president of the Thai National Shippers' Council (TNSC), said the council remains confident in the government's vaccine inoculation plan, but wants it to accelerate distribution as fast as possible following outbreaks an electronics factory and chicken processing plant in Saraburi.

Mr Chaichan said export orders and deliveries will be affected if factories have to stop their operations for up to two weeks.

He insisted there has not been an impact to the country's overall exports because most importers understand the importance of stringent virus control measure at factories, especially those in food production.

"However, if the government can't distribute vaccines on June 7 as planned, it will directly affect the export and manufacturing sectors," said Mr Chaichan.

"The recent cluster of Covid-19 infections at the chicken processing plant in Saraburi indicates the infection can be brought in from outside the factory. Without effective and broad vaccine distribution, it is difficult to predict which factory will see future outbreaks."

He proposed the government vaccinate workers first in the logistics and manufacturing sectors, similar to the rollout in Indonesia that prioritised workers valuable to the economy over those more vulnerable to the virus.

The TNSC also called on the government to allow exporters to employ workers on an hourly basis to ease the ongoing labour shortage and reduce production costs.

Mr Chaichan also suggested the administration fast-track trade negotiations on a government-to-government basis with neighbouring countries such as Myanmar and Cambodia to address the labour shortage and illegal influx of foreign workers.

Some 400,000 foreign workers are needed to support manufacturing in the third and fourth quarters this year, he said.

Sanan Angubolkul, chairman of the Thai Chamber of Commerce, was upbeat about the government's vaccination plan.

Thailand has done better containing the virus spread than other countries, he said, which is important because the export sector drives the country's economic growth. 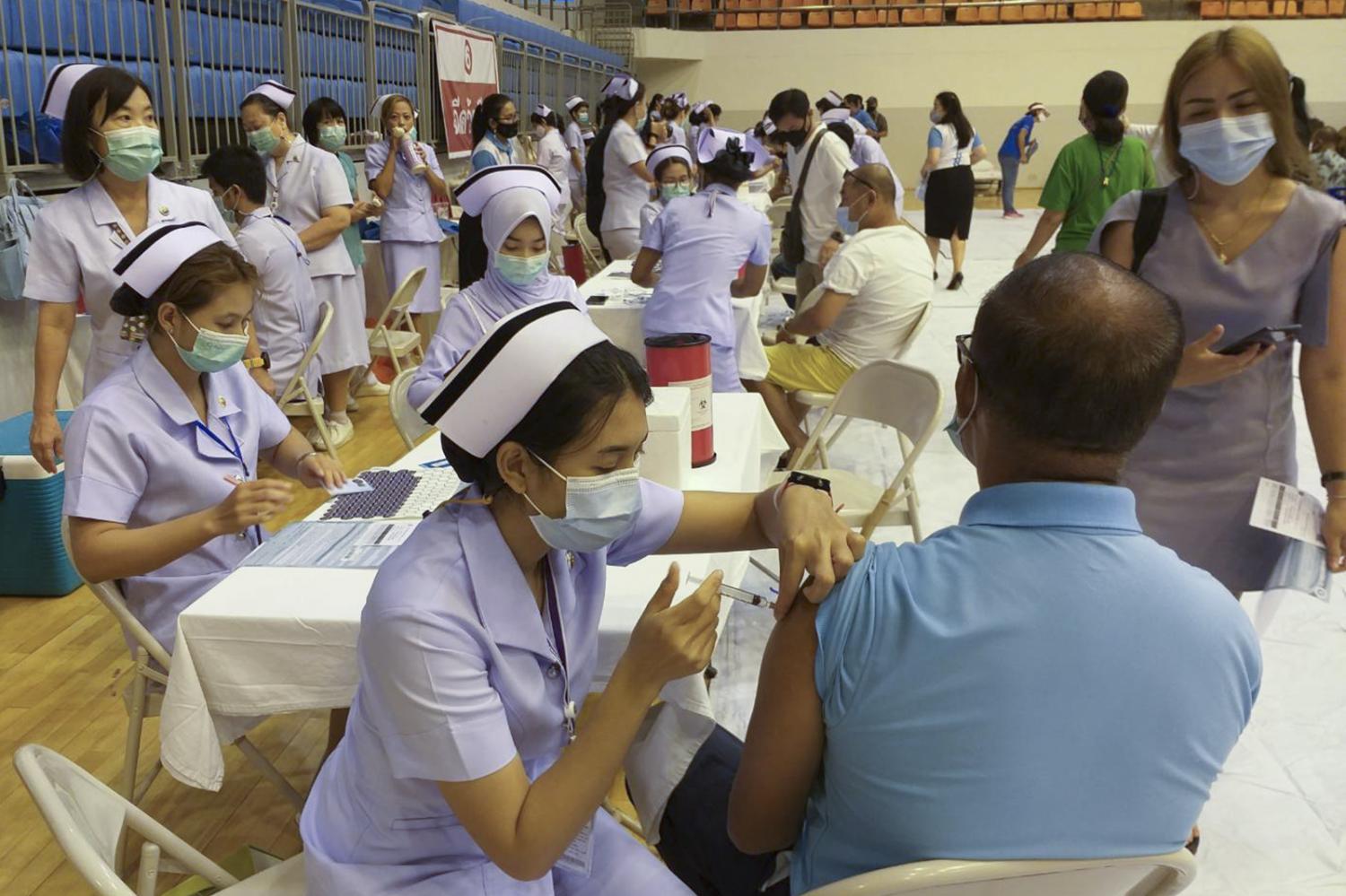 People receive Covid-19 vaccines in Phuket. The island is rushing to vaccinate locals ahead of the reopening initiative slated for July 1. Achadthaya Chuenniran

The Federation of Thai Industries (FTI) is focusing on Chinese-made Sinopharm vaccines to be procured by Chulabhorn Royal Academy, following concern about a vaccine shortage under the state inoculation plan.

The FTI warned against a possible setback to the vaccine rollout this month after several hospitals reportedly suspended injections of AstraZeneca vaccines because of its scarcity.

UK-made AstraZeneca and Chinese brand Sinovac have been the only two vaccines distributed to the public since late February.

Public Health Minister Anutin Charnvirakul insisted on June 1 6 million doses of AstraZeneca vaccines will be delivered in batches throughout June, as stated in a contract, though the amount of doses in each batch will have to be negotiated between the Department of Disease Control and vaccine manufacturers prior to delivery.

The FTI wanted a total of 1 million doses, but signed a memorandum of understanding with the Chulabhorn Royal Academy to receive 300,000 doses, said FTI vice-chairman Kriengkrai Thiennukul.

Around 6,000 member companies of the FTI indicated they are willing to pay for the vaccination of their workers to avoid the registration and delays of the state inoculation plan. The companies want to vaccinate their employees as a worker benefit, Mr Kriengkrai said.

Each Sinopharm dose is estimated to cost 1,000 baht, he said, with each employee needing two doses.

The FTI expects the Sinopharm vaccines will be imported to Thailand between June 15-20, over a week after the government is scheduled to start its mass vaccination plan on June 7.

"We told the academy we want to administer vaccines to workers at their factories or in industrial estates," said Mr Kriengkrai. "This method is efficient for factories with a large number of workers."

Workers in industrial estates will be among the first groups in industrial areas to receive vaccines to prevent disease transmission. Those who work in "industries sensitive to Covid-19" such as processed and frozen food are also a priority because their customers overseas demand strict hygienic standards, he said.

However, Chinese-made vaccines have had much lower efficacy rates against Covid-19 than US-manufactured options such as Pfizer, which had 98% protection against the virus.

While Sinopharm is estimated to have 79% efficacy against symptomatic Covid-19 infections, according to the World Health Organization, the United Arab Emirates has begun giving some of its citizens three doses of Sinopharm because some of them did not develop immunity. Bahrain failed to lower its infection rates even after fully vaccinating half its population, mostly with Sinopharm. 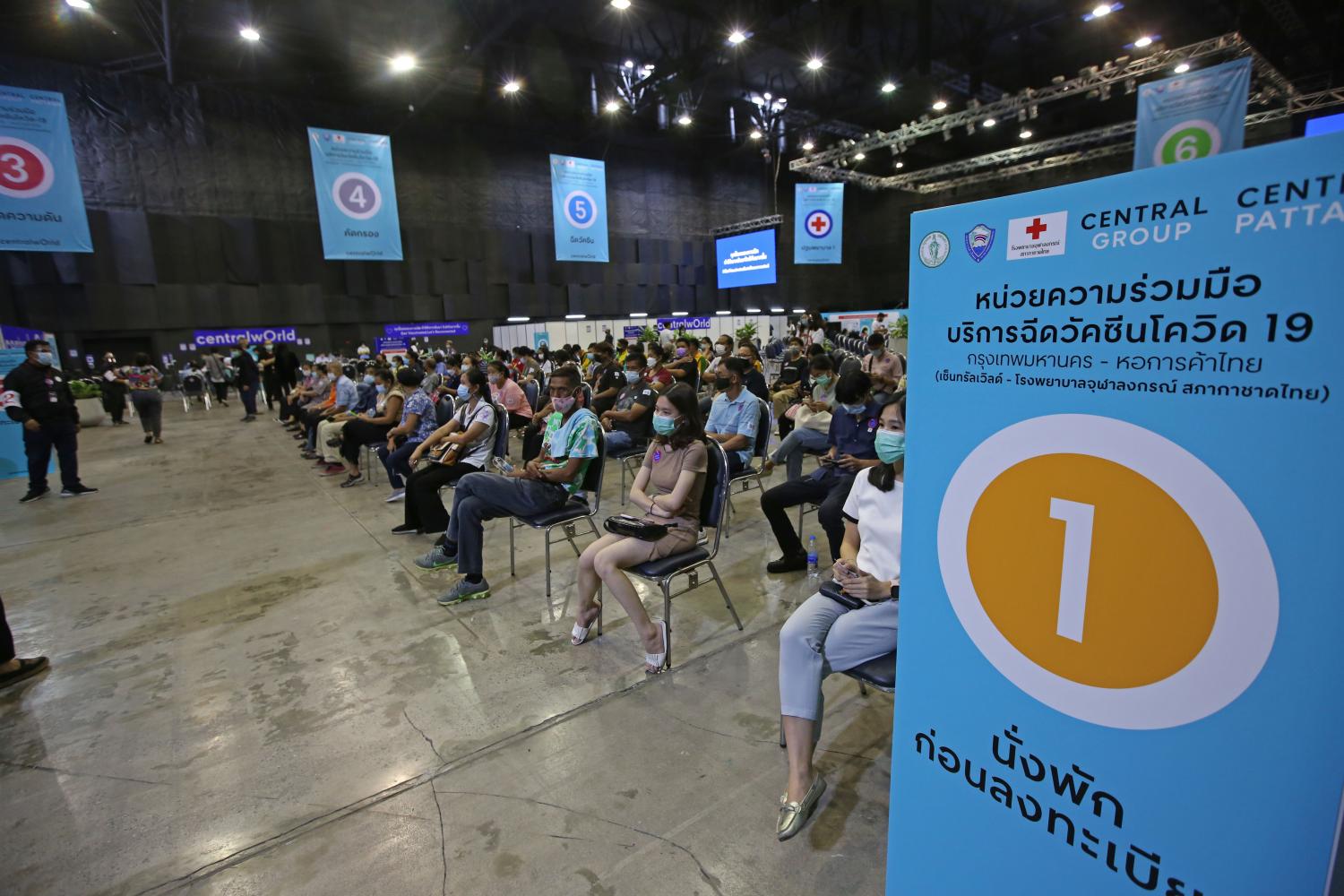 People wait for getting Covid-19 vaccinations at CentralWorld in Bangkok. Varuth Hirunyatheb

Last week, a chicken processing plant owned by Charoen Pokphand Foods Plc in Saraburi was temporarily closed for disinfection after 391 of its workers were found to be infected with Covid-19. 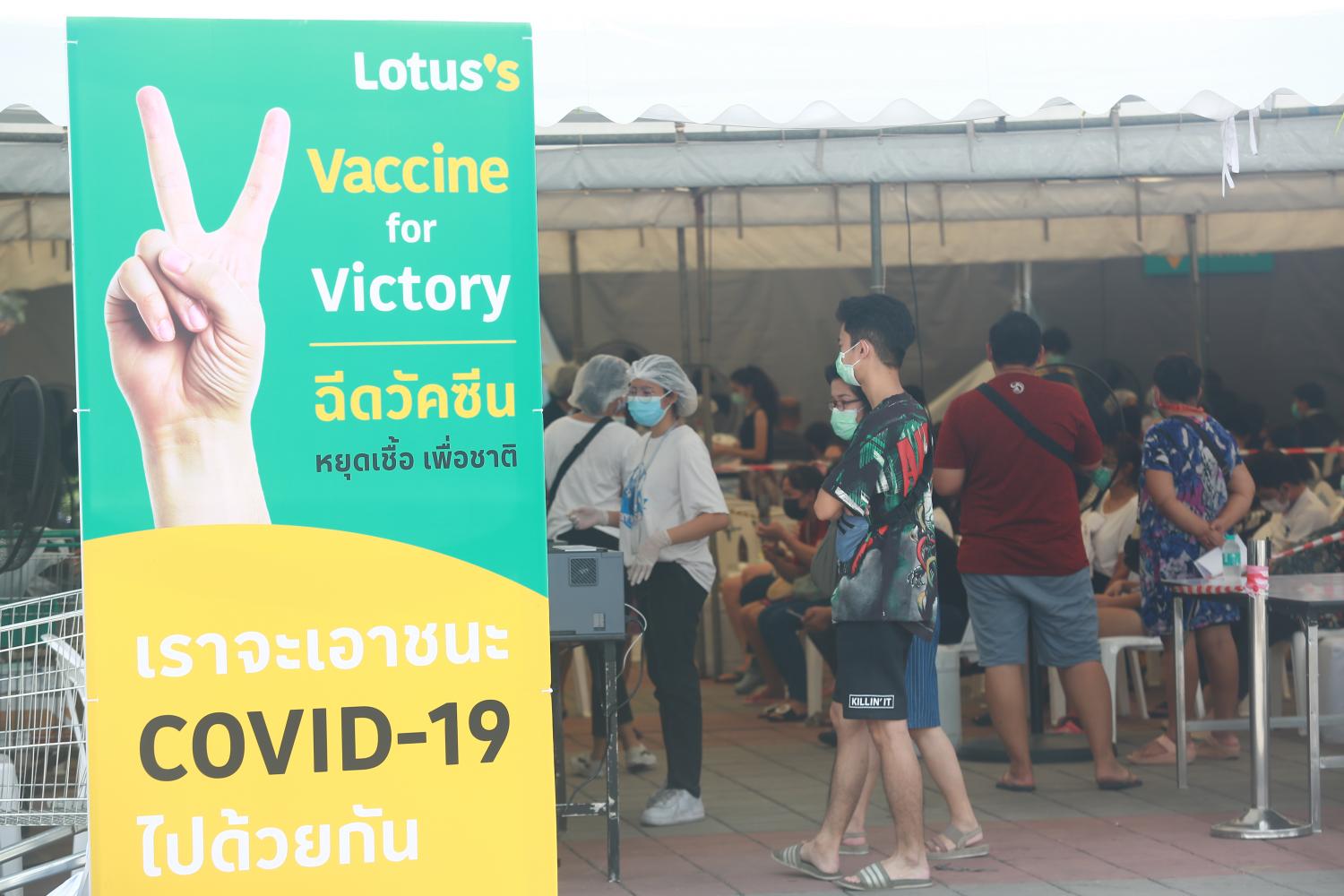 People receive their second jab of Covid-19 vaccinations at Lotus Rama IV which has turned into a vaccination site for those in the Klong Toey cluster. Somchai Poomlard 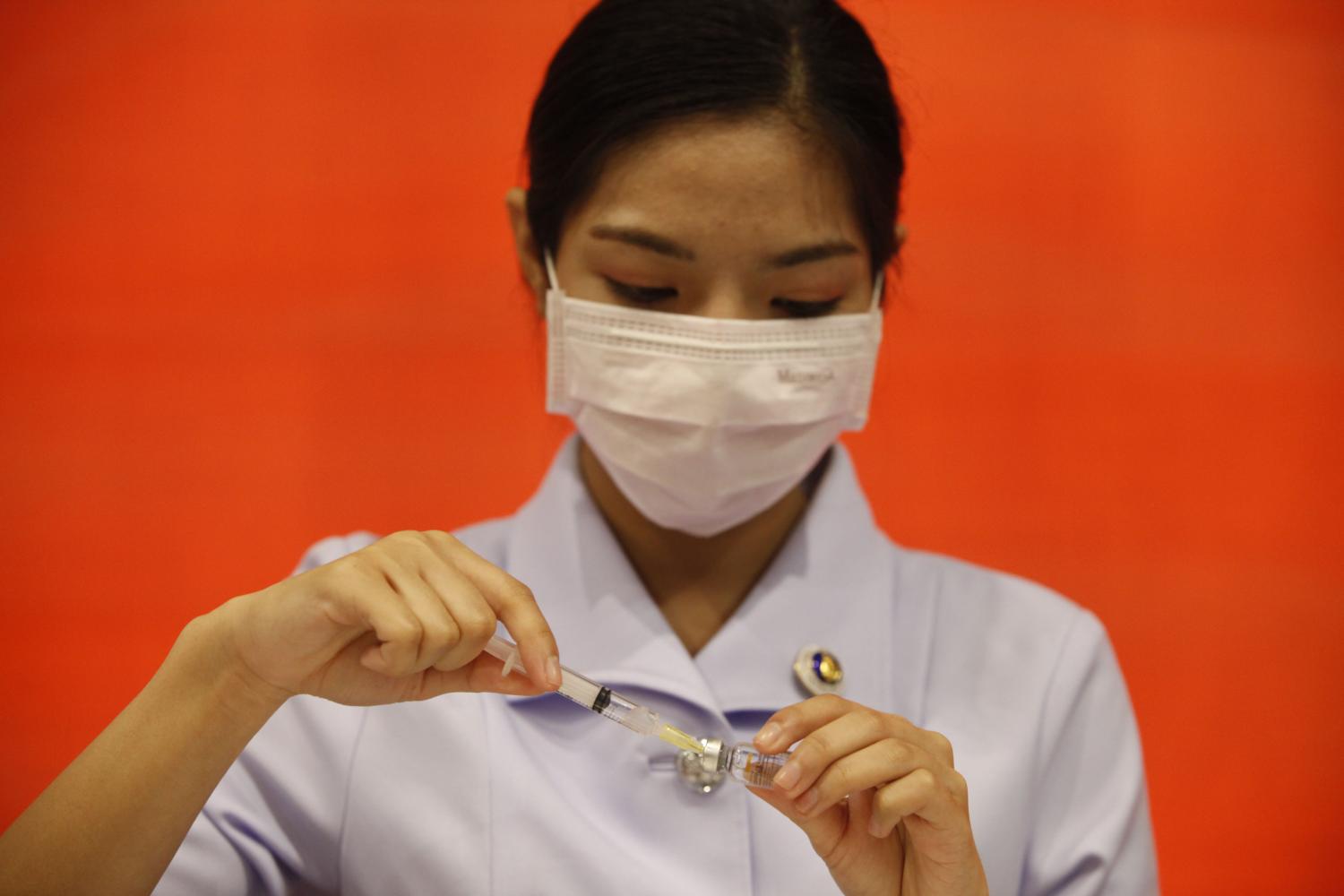 A nurse prepares a dose of the Covid-19 vaccine at Central Lat Phrao. Varuth Hirunyatheb 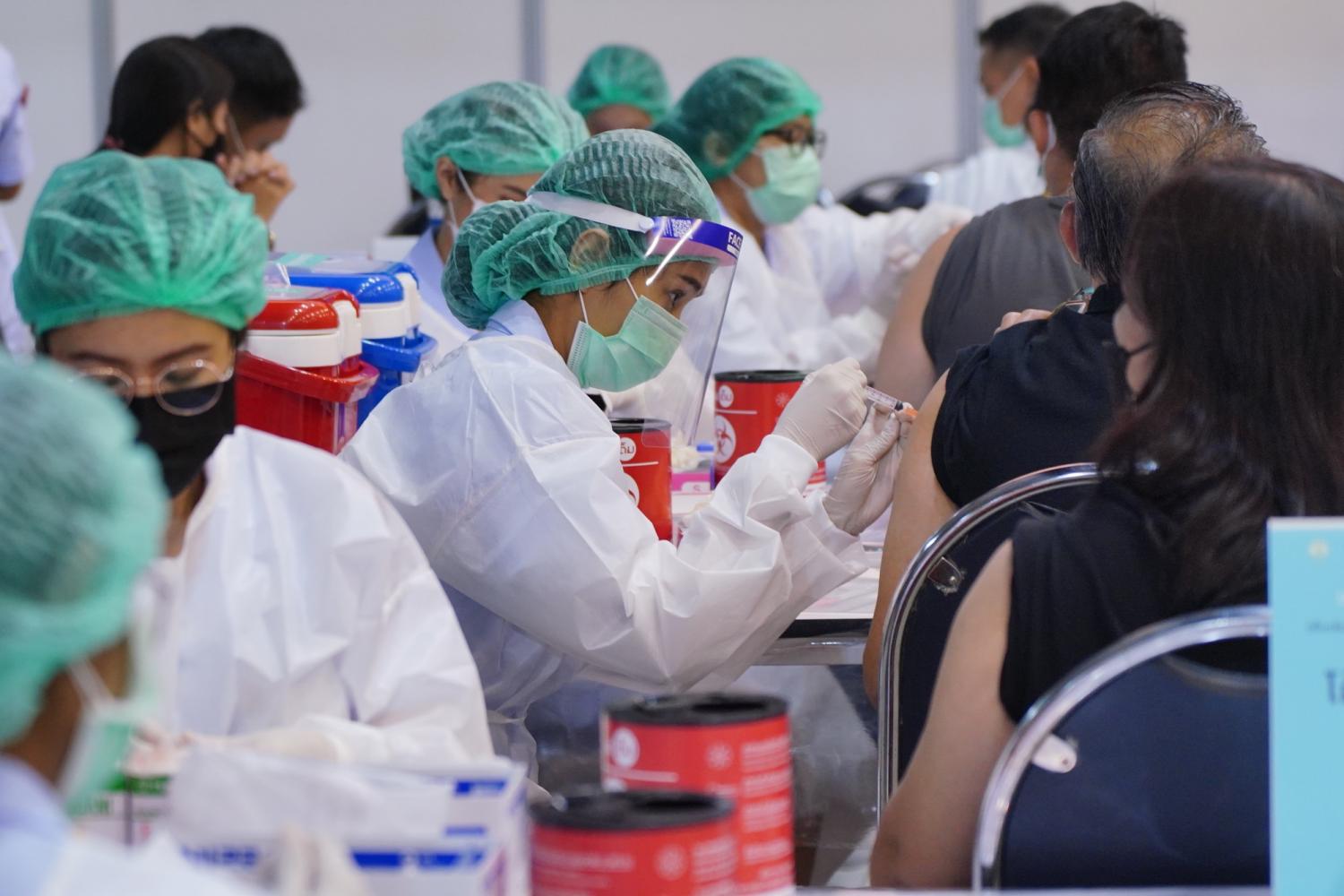