Cleaning up our act
Business

Cleaning up our act

Asean makes a new push to deal with its world-beating marine plastic waste problem. By Ismira Lutfia Tisnadibrata in Jakarta

For Southeast Asian countries, the meaning of regional connectivity and integration goes beyond their vision of development and economic progress. Interconnectedness also applies when discussing disasters and environmental degradation.

One example is transboundary haze, the top-of-mind term for the raging forest fires on Sumatra or Kalimantan islands in Indonesia that generate choking, hazardous haze affecting Singapore, Malaysia and Thailand.

But the growing mountains of waste, particularly plastic, that the region's 630 million people generate are becoming a bigger shared challenge by the day. In particular, the plastic that enters our rivers and oceans is a man-made disaster that all 10 Asean states have an urgent need to solve.

According to the Asean Secretariat, six out of the 10 member states -- Indonesia, Malaysia, the Philippines, Singapore, Thailand and Vietnam -- generated 31.7 million tonnes of plastic waste in 2016. That was a fraction of the 243 million tonnes of waste they generated, 53% of which was uncollected. Less than a quarter of what was collected was recycled.

The United States Environmental Protection Agency in its October 2020 plan listed four Asean member states -- Thailand, Vietnam, the Philippines and Indonesia -- among the five Asian countries, with China being the worst, responsible for more than half of the mismanaged plastic waste littering the world's oceans.

The international trade in plastic products and plastic waste, coupled with the sudden increase in single-use plastics and personal protective equipment during the Covid-19 pandemic, placed even more of a burden on countries working to tackle plastic trash.

"Our seas and coasts are vital for our lives and livelihoods. However, they are under immense pressure, especially due to marine plastic pollution, which has the potential to damage human health as well as decimate the tourism and fishing industries that are vital to the regional economies," Mr Lim said during the launch of the Asean Regional Action Plan for Combating Marine Debris for 2021-25 on May 28.

Southeast Asian officials lauded the document as a "milestone" for the region, describing it as showing renewed commitment to provide a "scalable, solution-focused joint strategy to address marine plastic debris across the region" aligned with member states' national agendas.

"The volume of solid waste and marine debris generated across Southeast Asia is on the rise. Coupled with expanding urbanisation and a growing consuming class, the long-term effects are only just emerging," said Varawut Silpa-archa, Thailand's Minister of Natural Resources and Environment.

The regional action plan, he stressed, would also require engagement and support from stakeholders in many sectors, public and private, to make it work. 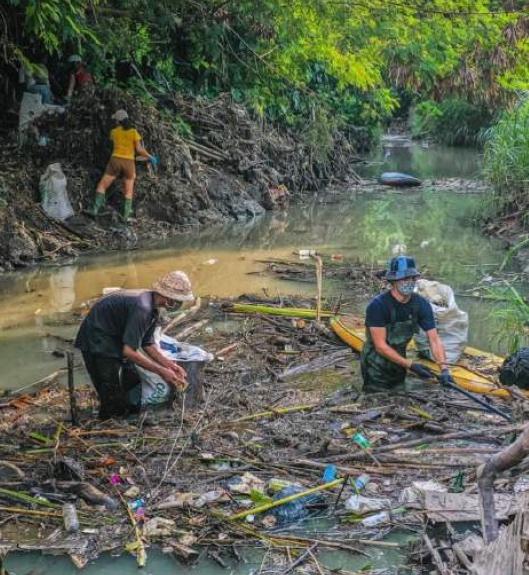 Volunteers from Sungai Watch gather every Friday to collect waste, most of it plastic, from rivers in Bali. (Photo: Sungai Watch)

The European Union (EU) has identified the marine plastic waste problem as one of the main areas for cooperation between the two regional blocs, according to Josep Borrell, the EU high representative for foreign affairs and security policy.

"We are very much committed to working with Asean as we can provide strong expertise and experience," Mr Borrell told Asia Focus and Indonesian media outlets during a visit to Jakarta earlier this month.

Plastic now makes up to 80% of the litter that goes into the oceans, and given the pace at which it is polluting the waters, "soon in the oceans there will be more plastic than fish", he warned.

"This is an issue of mutual concern. I think it is a fertile field for cooperation."

In Indonesia, the government has set a target to reduce marine plastic debris by 70%, reduce solid waste by 30% and manage 70% of solid waste by 2025, as laid out in its National Plastic Action Partnership (NPAP).

Government officials have claimed that Indonesia is on course to achieve the target. Efforts to tackle the problem, which include circular economy promotion and programmes to recycle plastic waste, have already resulted in significant reductions.

Marine plastic waste generated in Indonesia was reduced by 15.3% in 2020, said Novrizal Tahar, director for waste management with the Environment and Forestry Ministry.

Regional governments such as the capital Jakarta and the resort island of Bali have come up with their own plastic waste-busting policies, which include banning plastic straws, cutlery and packaging for food takeouts or deliveries, along with single-use plastic shopping bags.

But there are concerns that plastic waste in Bali shows no sign of decreasing, despite a gubernatorial decree in 2018 that bans single-use plastics.

Sungai Watch, a volunteer movement that collects waste from Bali's rivers, finds it has no shortage of work to do.

"During our weekly cleanups, we collect new and old plastic trash, with the latter having clotted and formed into layers in the rivers," Nola Monica, a project manager for Sungai Watch, told Asia Focus.

"We also find that most of the plastic trash is discarded plastic mineral water bottles."

In August and September last year, the volunteers collected 5.2 tonnes of plastic waste during their Friday cleanup outings. Plastic bags accounted for 18.5% of the waste they plucked from nine locations in Tabanan and Badung districts on the southern part of the island, where most of the now-empty tourism hotspots are located.

The waste, if uncollected, would end up in the ocean and litter beaches in Bali and other islands across the Indonesian archipelago.

The group documented its progress in the first edition of its River Plastic Report in September last year. "Rivers are the perfect connection between life on land and the ocean," wrote Sungai Watch founder Gary Benchegib.

He acknowledged that a river cleanup is a temporary solution, though it still serves as a way to prevent plastics from flowing into the oceans.

The report also details the results of a brand audit of the plastic waste its volunteers collect to identify the brands on the packaging. It found that two huge multinational consumer goods companies with European origins are among the top five river polluters. The other three are Indonesian brands. 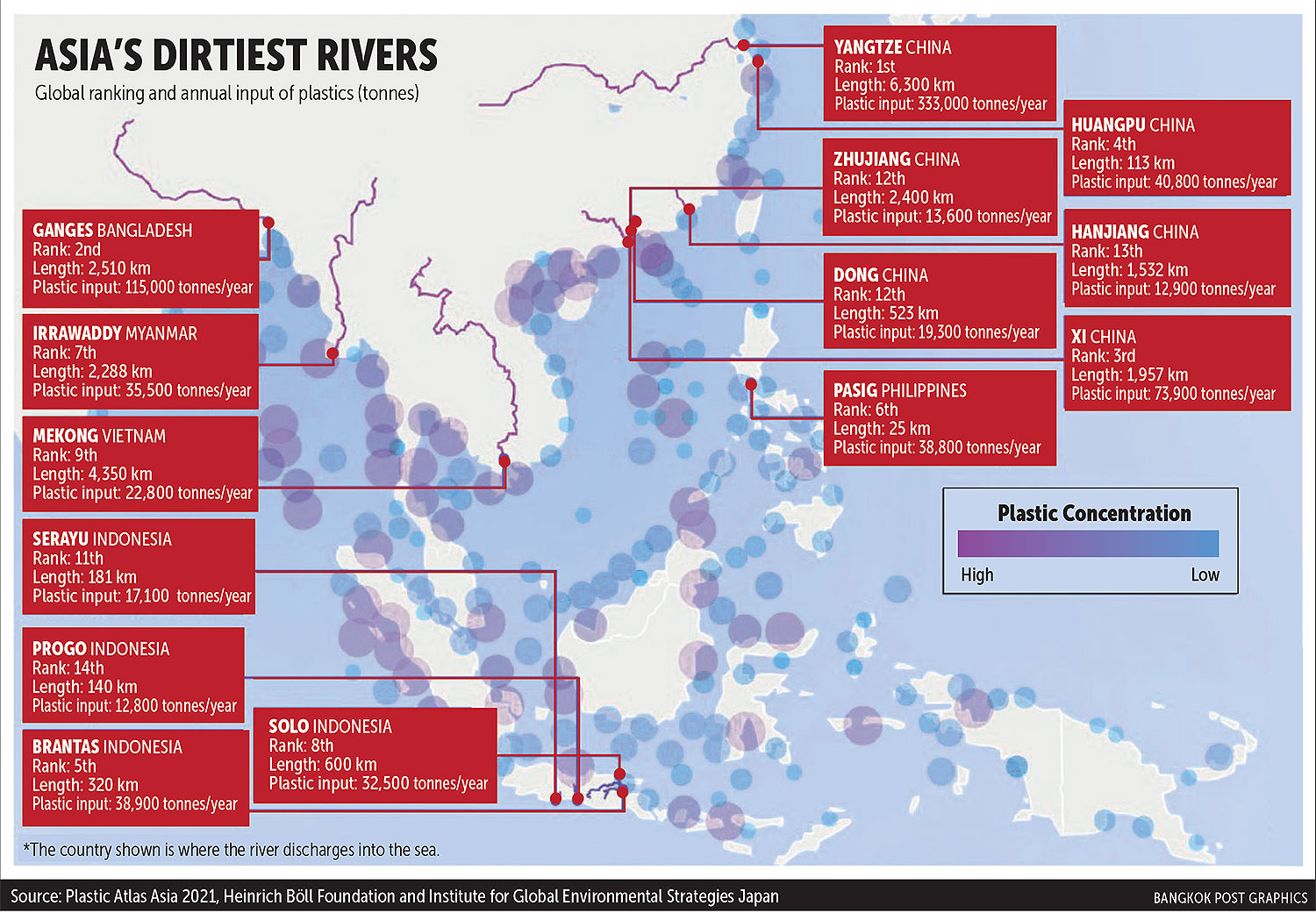 For its part, the EU's Mr Borrell said the regional bloc "tries to avoid plastic going out of the circle and jumping to the ocean" by promoting a circular economy strategy.

"The circular economy means that everything has to be recycled," he said. "We are fighting against the single-use, the use-and-throw-away [plastic], and our companies have to abide by more constraining rules to avoid plastic from going into the environment."

Some discarded single-use plastic bottles have found their way into recycled materials for new, marketable products such as hiking backpacks, highlighting the circular economy concept.

"We are gradually switching to use recycled plastic materials for our outdoor equipment," Eiger owner Ronny Lukito told Asia Focus.

"We still, however, have to import the plastic-recycled material. In the future, we will use materials produced from Indonesia's recycled plastic waste. We want to take part in reducing plastic trash in the country, which also litters hiking trails in our mountains."

According to a World Bank study launched in March, in Malaysia, the Philippines and Thailand there is an untapped economic potential equivalent to $6 billion per year, or more than 75% of the material value of the plastics that were lost, when single-use plastics are not recycled.

According to the study, less than a quarter of the plastics available for recycling are being recycled into valuable materials in the three countries.

"But there is strong government momentum in these countries to identify critical policies, and to craft roadmaps to strengthen demand for all recycled plastic resins, level the playing field for global and domestic companies and help drive a circular economy for plastics."