Thailand up one spot in world competitiveness
Business

Thailand up one spot in world competitiveness

Thailand has climbed one spot to 28th in the 2021 world competitiveness rankings conducted by the Institute for Management Development (IMD), supported by improvements in employment and public finances.

However, its neighbours Malaysia and Indonesia saw bigger increases. The former rose two places to 25th while the latter advanced three spots to 37th. 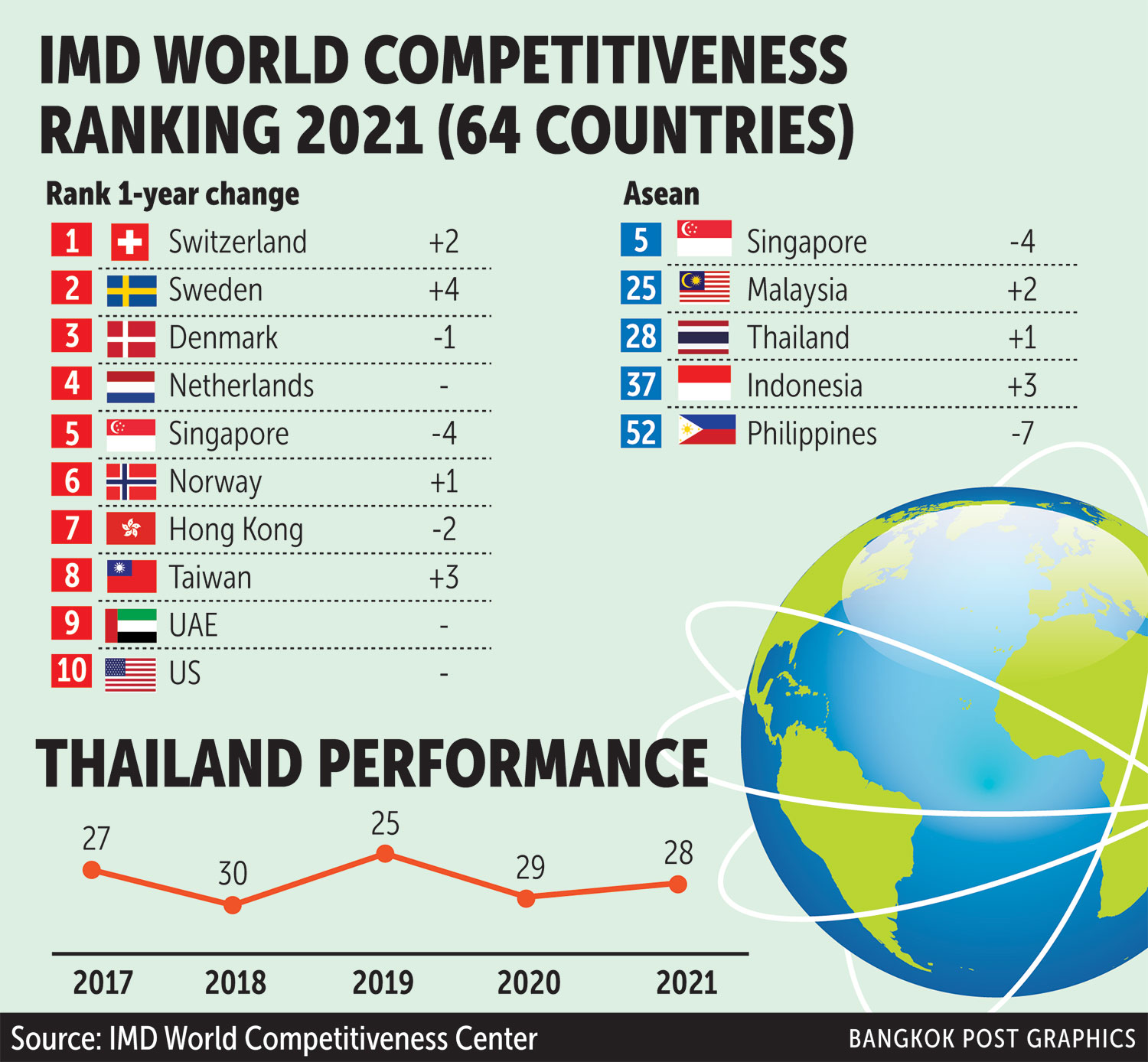 IMD, a Switzerland-based academic institution, ranks 64 economies and assesses the extent to which a country promotes the prosperity of its people by measuring economic well-being through hard data and survey responses from executives. This year the rankings show the economic impact of pandemic across the globe.

Singapore fell from the world's top to the fifth but still leads in Asia while China advanced four positions to 16th – the sharpest rise among Asian economies.

The US remained at 10th and the UK climbed one spot to 18th.

According to IMD, Thailand’s rise was attributed to improvements in several areas such as labour market indicators, including increase in labour force growth and in-training opportunities of employees in the private sector.

Some other positive notes are also seen in public finances, such as government deficit, which remains below 5%, and business legislation.

The country also displayed some gains in scientific infrastructure, including an increase in scientific academic research publications, confidence express by Thai business managers on the collaboration between academia and the private sector and the protection of intellectual property rights, according to IMD.

Weighing on the country's ranking this year was international trade, which dropped sharply to 21st from from 5th last year.

Christos Cabolis, chief economist of the IMD World Competitiveness Center, told the Bangkok Post there were several areas that Thailand could improve to bolster its competitiveness, including so-called intangible infrastructure.

“Thailand shows considerable margins for improvement in a series of indicators measuring the extent, the degree of investments in and the quality of its educational system in particular at secondary and tertiary level,” he said.

Second, the health and environment sub-factor highlights the fact that total expenditure on health, as well as the quality of the healthcare system, also show room for improvement.

Third, innovation in business processes to reduce environmental impact along with productivity of private and public companies are further areas where the country should improve upon to increase its competitiveness, Mr Cabolis said.

He pointed out Thailand, similar to other peer countries, has been hindered by the impact from the pandemic with economic performance factor tumbling seven places to 21st and domestic economy subfactor declining four positions to 41st.

According to Mr Cabolis, in a short term, an increase in government expenditure should be supportive of economic recovery in the post pandemic.

On a longer term, important public and private investments should be channelled to speed up digital transformation in the public sector and in companies, as well as in the formation of digital and technical skills in the workforce.

“These efforts would help increasing labour productivity, government efficiency and workforce upskilling with the final result of tackling many of the challenges,” he said.

Some other positive notes for Thailand are business legislation sub-factor thanks to a reduction in tariff barriers on import, a general increase in satisfaction in the Thai business community regarding unemployment legislation and easiness of starting a business, he added.