Prayut tells public the risk is worth it

Prime Minister Prayut Chan-o-cha has told the public that Thailand needs to accept the risk of reopening the country, kicking off with the so-called Phuket Sandbox scheme to welcome foreign tourists on Thursday.

The country is placing high hopes on a much-needed tourism revival via the sandbox, a model that allows vaccinated foreign travellers to visit without quarantine.

Gen Prayut was confident the country's tourism will be resuscitated if all parties involved succeed in pushing ahead with the scheme.

According to the Centre for Covid-19 Situation Administration (CCSA), if more than 15 new infections are detected per 100,000 people in Phuket in one week, the sandbox may be delayed or even cancelled.

The prime minister, together with cabinet ministers and senior health officials, arrived on the resort island to meet officials and health volunteers.

They visited Phuket International Airport to welcome a group of 51 tourists from Singapore in the evening.

"Hello, welcome to Thailand," Gen Prayut greeted the incoming tourists who were unaware beforehand they would be welcomed by him.

A total of 347 passengers on flights from Israel, the United Arab Emirates, Qatar and Singapore landed on Thursday.

Etihad Airway's EY430 flight on the Abu Dhabi-Phuket-Suvarnabhumi route arrived at 10.20am with 44 passengers. Twenty-three disembarked in Phuket while the rest went on to Suvarnabhumi.

The first group of travellers then underwent screening, which included fever and vaccination checks. All were required to download the Thailand Plus and Mor Chana apps.

They later went through immigration and customs procedures before having swab samples taken for RT-PCR testing.

The other three flights to Phuket on Thursday were from Qatar with 136 passengers landing at 12.43pm, from Israel with 137 passengers at 1.52pm and from Singapore with 51 passengers at 5.14pm.

Starting on Thursday, Phuket waived quarantine requirements for foreign tourists who have been fully vaccinated against Covid-19 under the sandbox model, which is being touted as a model for the reopening of the country's tourism industry. 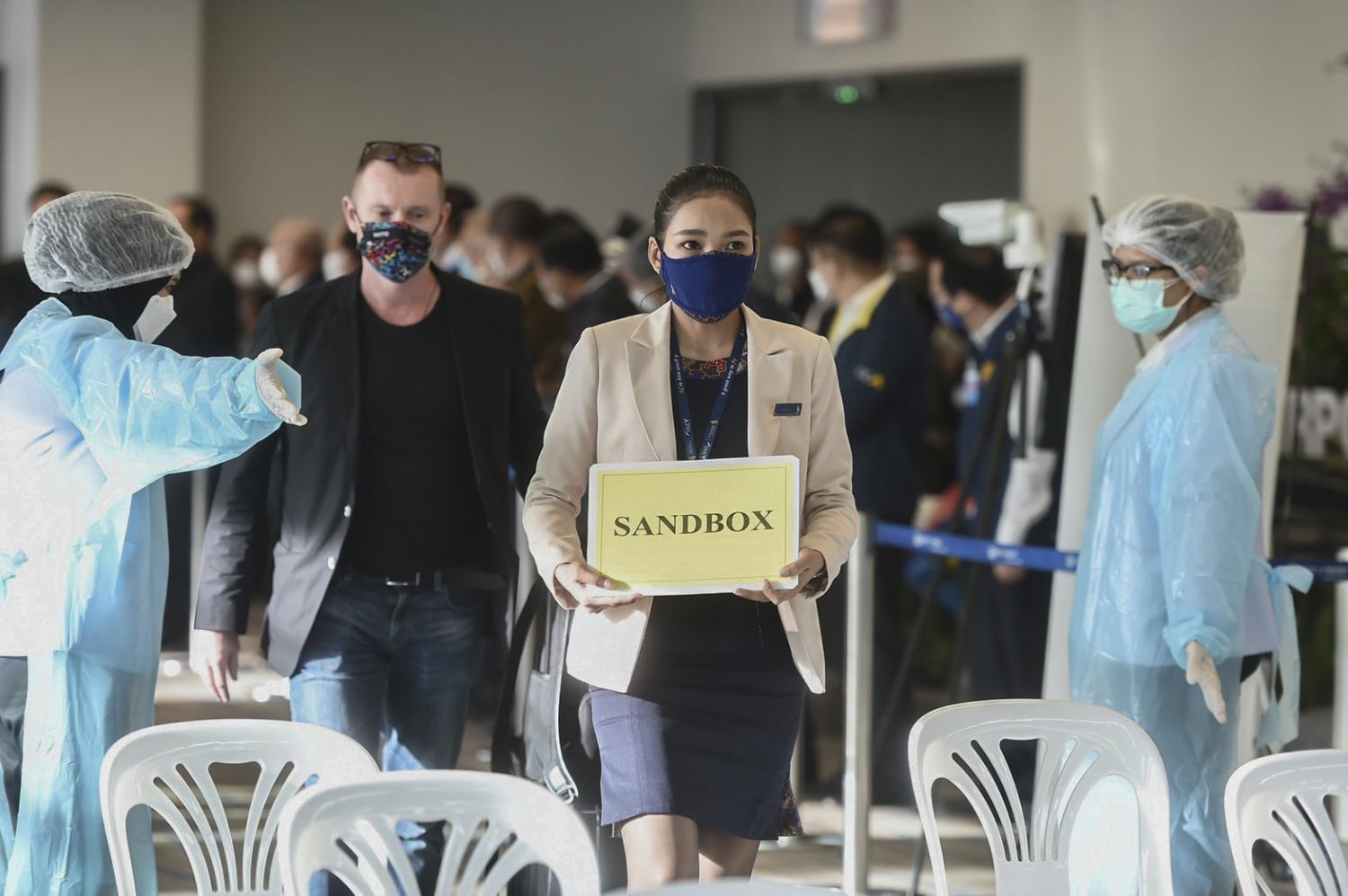 An airport official holds a 'Sandbox' sign as she leads passengers to the arrivals lounge at Phuket airport. (Government House photo)

Early in the day, Gen Prayut inspected the screening station at the airport before going to the Royal Phuket City Hotel in Muang district to chair a follow-up meeting on the sandbox scheme.

"Flights have started to come in, with bookings made. More flights are expected to come in the next 15 days until the next quarter. If the Phuket Sandbox succeeds, we can expand the model to other areas," the prime minister said.

He said Phuket's reopening is not just for the benefit of the tourist province alone, but for the sake of the whole country.

Other provinces should follow the example of Phuket and come up with measures to prepare for the reopening of the country over the next 120 days, Gen Prayut said. 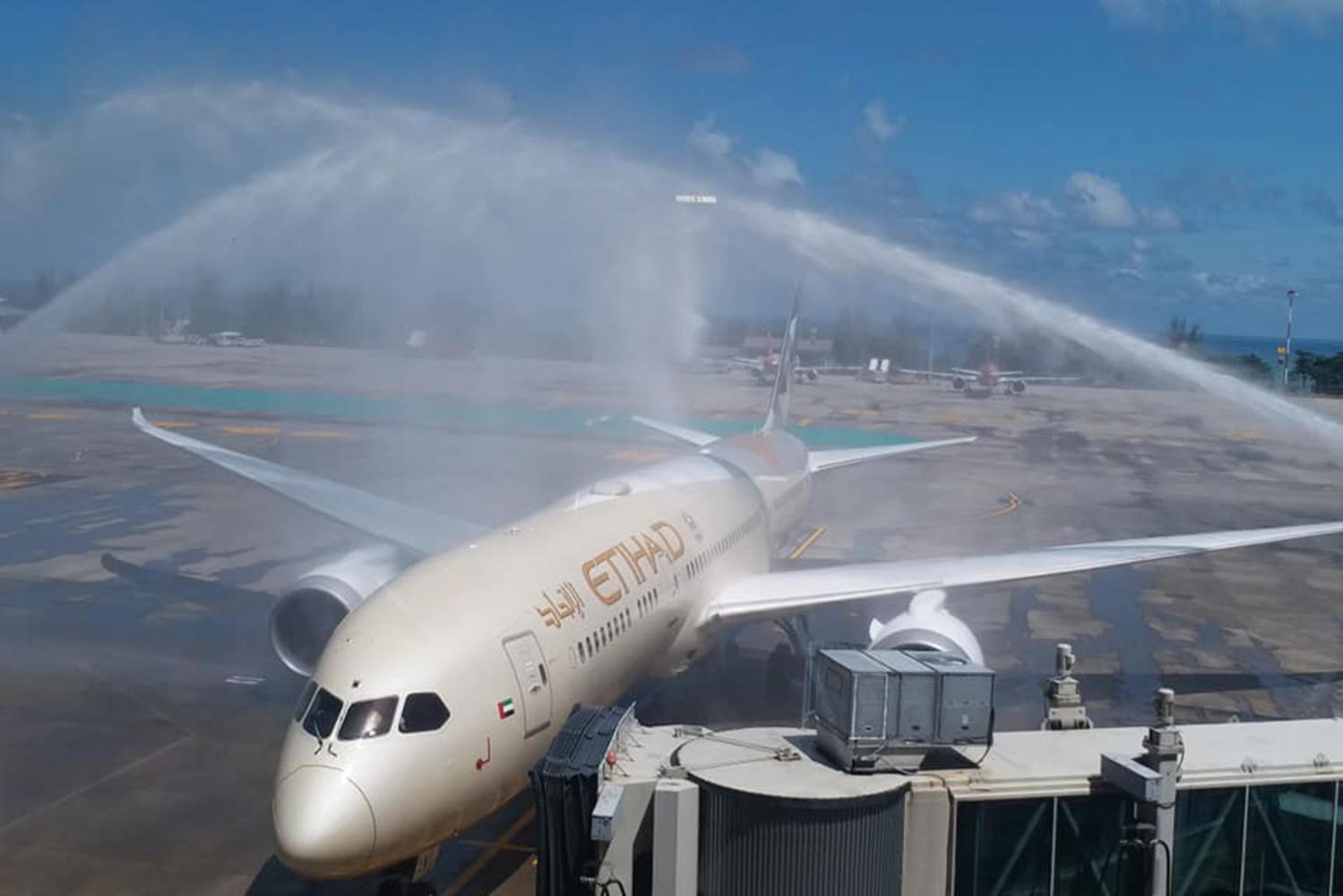 An Etihad Airways plane goes through a 'water tunnel' to welcome the first group of tourists to arrive on the resort island. (Phuket Provincial Public Relations Office photo)

"We know there are risks involved. Some countries are seeing a new surge in new cases and fatalities and people from those countries are expected to visit Thailand. But we have to accept the risk. Most importantly, we have to follow up and assess the situation closely," Gen Prayut said.

"If there is anything that must be changed, action must be taken quickly and properly to ensure the goal of reopening the country in the next 120 days will not be affected," he said.

"Everything begins with the first step. We have to speed up in Phuket. If not, we can't move forward, he said, adding that the government is not only tackling Covid-19, but also trying to overcome the economic hit caused by the pandemic.

Gen Prayut and his delegation flew back to Bangkok at 7pm.