While the economic impact of the pandemic creates havoc among the country's smaller businesses, there are mixed opinions on how larger firms and corporations are managing to cope

The once-vibrant Terminal 21 mall in central Bangkok is devoid of human activity following the recent raft of measures aimed at curbing the growing number of daily infections in the capital. Varuth Hirunyatheb

Thailand's economic risk is escalating as the country copes with its worst Covid-19 outbreak yet, with new infections exceeding 10,000 a day since July 17 and fatalities continuing to pile up.

The outbreak prompted the government to introduce tougher restrictions and impose measures to curb travel in 13 high-risk provinces including Bangkok -- effective from July 20 -- in an effort to stem the spread of the more contagious Delta variant.

The measures are likely to delay a Thai economic recovery following its GDP contraction of 6.1% last year, the worst full-year performance in 22 years, as well as derail the government's ambitious goal of welcoming back fully vaccinated tourists by mid-October.

The Bank of Thailand said last Thursday the government's latest measures to contain new infections were expected to whittle down GDP by 0.8 to 2 percentage points this year, with economic activity plummeting to levels similar to the first wave in April 2020 when a nationwide lockdown was instituted.

Concerns are growing if the economic downturn continues, it will eat into the earnings of medium and large-scale companies. Small firms are already strapped for cash and many laid off their employees.

Household debt is increasing while the government's revenue collection is threatened by slowdown.

Anti-government protests are also gathering pace, challenging the government's pledge to contain infections in the country. 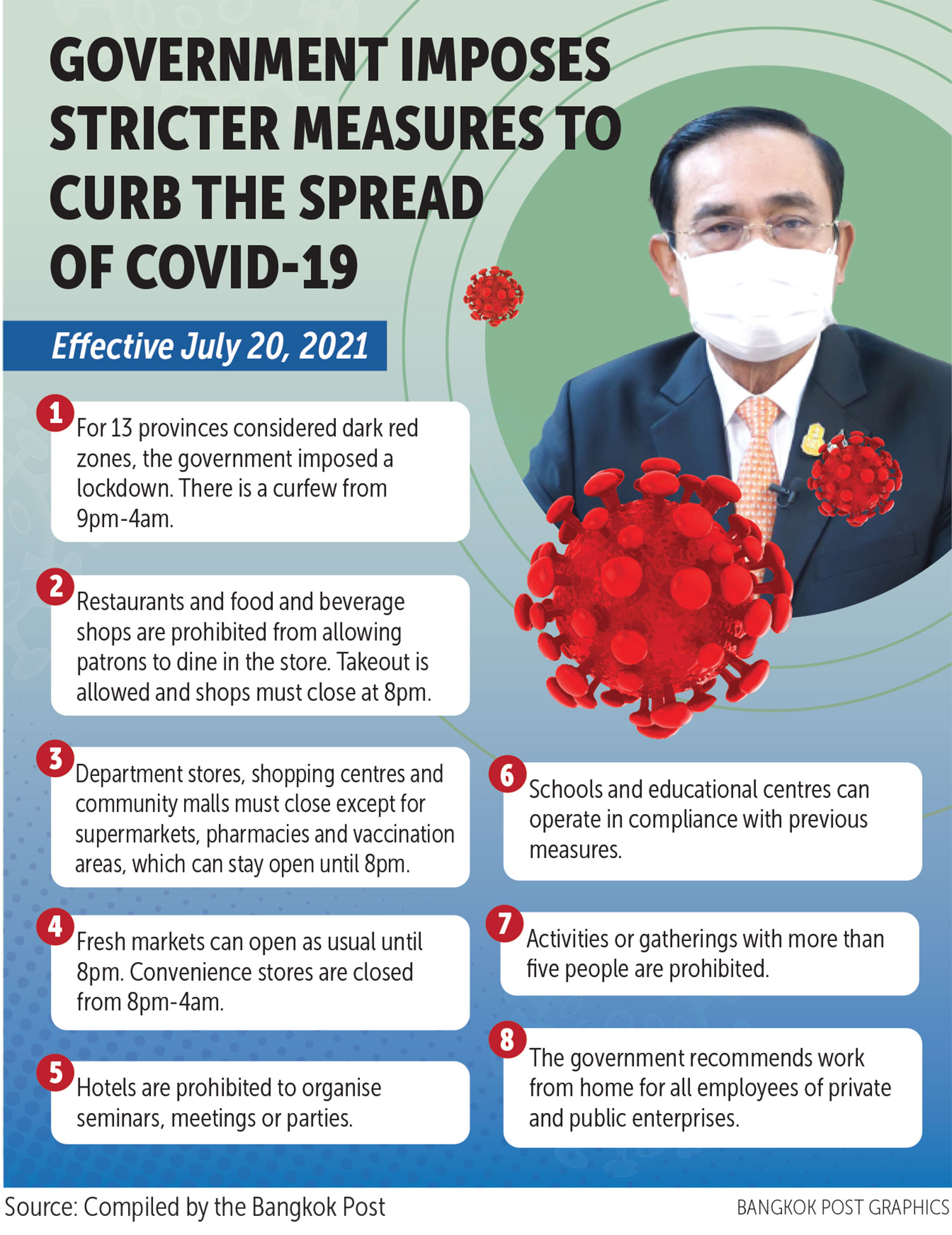 Supant Mongkolsuthree, chairman of the Federation of Thai Industries (FTI), said the federation is worried about Covid-19's impact on factories of all sizes if the government's measures fail to reduce infection rates.

"We're now increasingly concerned the outbreak may cause employers who are bearing a heavy brunt to be unable to pay taxes," he said.

The expanded lockdowns to cover high-risk provinces in an effort to contain the infection spread may cost over 100 billion baht in economic losses, said Mr Supant.

The FTI earlier estimated the government's 14-day lockdown measures in 10 high-risk provinces that began on July 12 would cost the economy 50-60 billion baht.

The government announced on July 18 in the Royal Gazette it was adding three provinces to the lockdown -- Chachoengsao, Chon Buri and Ayutthaya.

"If the government fails to reduce the number of new cases, infections may spread to industrial factories of all sizes despite strict preventative measures," he said.

The FTI is unsure whether the government can flatten the curve because there is a shortage of vaccines and public testing remains insufficient.

"If these conditions continue, manufacturers will focus only on business survival. Most of them have said there is no business strategy left to adjust," said Mr Supant.

He warned the government would find out the hard way how impossible it is to squeeze taxes from cash-strapped businesses. 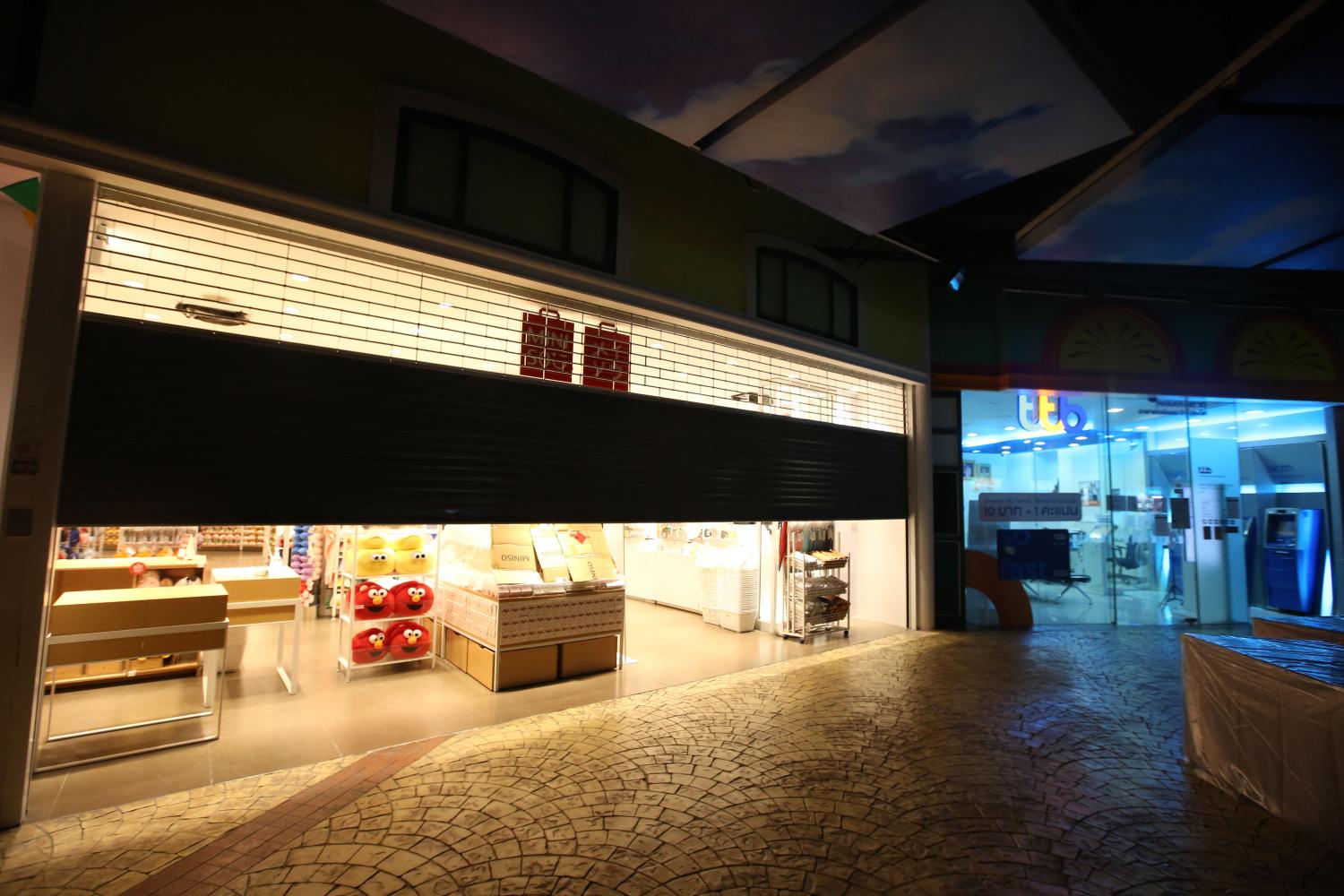 Thirayuth Chirathivat, chief executive of Centara Hotels and Resorts, said the company has enough liquidity to last until December next year if hotels don't book any new guests and tourists do not return.

Centara cut costs and slowed investment to preserve cash flow while implementing a leave without pay policy to retain as many hotel staff as possible.

"The largest monthly cost is payroll, which contributes more than 60% of operating costs," said Mr Thirayuth. "Layoffs are a last resort, but we do not want that as everyone has already suffered from the outbreak."

The outlook for the second half of the year largely relies on the pace of vaccinations, while the rate of new infections must be stemmed, he said.

The Centre for Covid-19 Situation Administration estimated new daily infections could reach 30,000 cases by August, which would make the prime minister's goal of reopening the country by mid-October impossible.

Islands in southern Thailand have already reopened for fully vaccinated foreign travellers as part of a pilot scheme.

"The most urgent need is effective communication to tourism source markets to differentiate Phuket and Koh Samui, which have reported very few cases, from the rest of the country," said Mr Thirayuth.

He said after the EU dropped Thailand from its safe list and the government imposed a ban on domestic flights to and from the dark red zones, hotels in Phuket received cancellations. The occupancy rate this month at Centara hotels stagnated at 18%, down from a brief upward trend.

If Phuket and Koh Samui continue to limit infections, the last quarter should be very promising for operators, said Mr Thirayuth.

He said a relaxation of the sandbox requirements, such as a reduction in the minimum stay of 14 days and decreasing the number of swab tests required during a trip, would stimulate more demand.

Regarding the 7+7 island extension plan that allows tourists to stay in Phuket for seven days before visiting other locations, Mr Thirayuth said the government must curb the infection rate as some of the other island locations may involve transit on the mainland, which would require close monitoring due to potential risk. 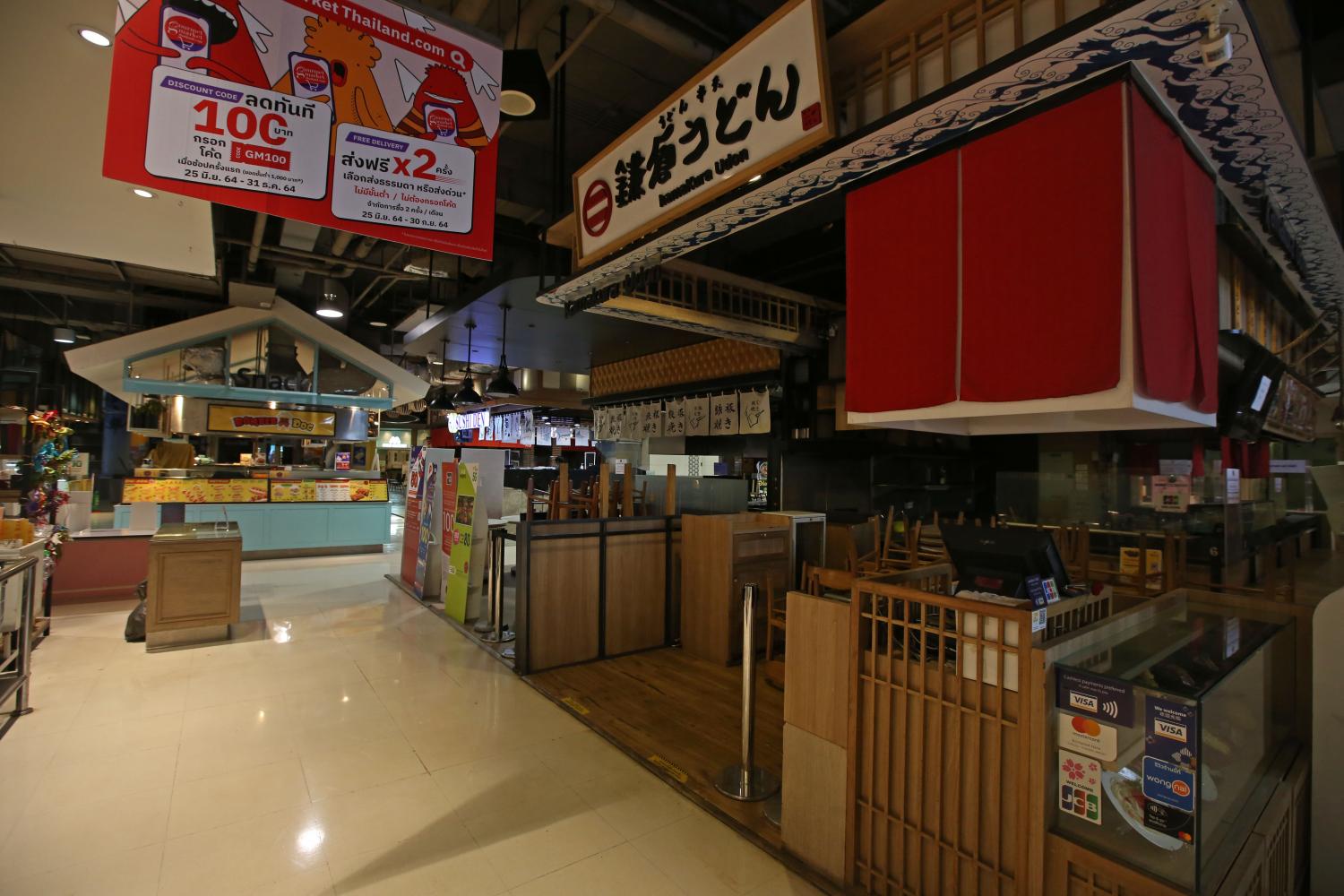 A food court at Terminal 21 mall in Bangkok sits barren following its recent closure in an effort to curb the outbreak. Varuth Hirunyatheb

Voralak Tulaphorn, chief marketing officer at The Mall Group Co, the operator of The Mall Department Store, Emporium, EmQuartier and Paragon malls, said the latest lockdown measures delivered a heavier blow to retail businesses than similar measures in the past.

Restaurants in particular are feeling the pinch, as they act as the anchor to attract customer traffic to malls, she said.

"The latest curbs may not be the best measures, but I understand the government is trying its best to stop the infections as quickly as possible," said Ms Voralak.

Following the new measures, the company ordered a portion of its staff to take leave without pay until the end of the lockdown, she said.

"We don't plan to lay off our workers because it's quite difficult to find skilled workers in the retail industry. If we cut them, we would have to reinvest in training new staff," said Ms Voralak.

"That is not a good idea when the retail business is struggling."

But he disagrees with closing the kitchens of restaurants in malls and banning food delivery drivers from picking up food from the kitchens.

However, he acknowledged that businesses have experienced varied impacts from the outbreak.

Tourism-related industries, such as airlines and hotels, have suffered the worst, said Mr Pipatpong. Retail businesses have been affected by the government's recent stringent measures.

The export sector is the lone bright spot in the economy, picking up in line with global demand, he said.

Mr Pipatpong said mid-sized to large companies often have a solid capital base, liquidity and financial capability when it comes to risk diversification.

This segment can raise funds from an array of financial sources including bank loans, debentures and the capital market, he said.

"A lot of SET-listed companies have announced they will increase capital to prepare sufficient liquidity because of the prolonged outbreak and greater uncertainties. This move reflects their liquidity management," said Mr Pipatpong.

He said KBank has offered financial assistance to all customer segments on a case-by-case basis. The bank has provided customers additional liquidity to help them better manage cash flow, said Mr Pipatpong.

Thanyanit Niyomkarn, the central bank's assistant governor for supervision group 2, said its debt assistance measures cover mid-sized and large corporations. The number of applicants for these measures is less than retail and small and medium-size enterprise borrowers for similar aid schemes, she said.

As of May this year, there were 2,060 corporate borrowers joining the central bank's debt aid programmes, accounting for a credit line of around 600 billion baht.

"Corporate customers have bargaining power with creditors, especially when it comes to interest rate cuts. Additionally, banks have the expertise to take care of large corporate clients and offer them proper financial assistance," said Ms Thanyanit.

Pisit Puapan, director of the Finance Ministry's Bureau of Macroeconomic Policy, said government revenue in fiscal 2021 ending in September is likely to miss the 2.67-trillion-baht target because of the impact of the pandemic.

The government is estimated to have collected net revenue of 1.44 trillion baht during the first eight months of this fiscal year (October 2020 to May 2021), which would fall 12.1% below its target for this period, he said.

The final tally of corporate income tax in September will allow the government to gauge how much its revenue goal is off-target, Mr Pisit said.

In fiscal 2020, when the pandemic broke out, the government collected net revenue of 2.39 trillion baht, falling short of the target by 12.3%.

Despite the prolonged economic doldrums, some IT product distributors are upbeat this year thanks to increased demand for devices among people working from home and studying online.

Smartphones have become important devices for people and they look to replace them if they break, he said.

"The local IT market can grow 5-10% this year, in line with sustained momentum from last year," said Mr Somchai.

However, the use of computers among corporates has slowed following the closure of offices amid heightened restrictions in response to the pandemic. Corporates have also postponed investments in IT projects.

Sutida Mongkolsuthree, chief executive of SET-listed Synnex, said despite the economic slump, the local IT market is growing as pandemic restrictions have driven demand for IT devices among people working from home and studying online.

"Computers, notebooks, network equipment and video conferencing systems are still seeing growing demand. However, some products such as memory cards are recording a decline in demand due to limited travel opportunities," said Ms Sutida.

The firm recorded its leanest inventory level this year, with products staying in stock for only 7-10 days, down from 30-45 days before the pandemic, she said. The local IT market is expected to rise by more than 5% this year, said Ms Sutida.

"We are a lucky sector to still see growth as technology remains imperative," she said.