Weak purchasing power means there is not much to worry about

Inflation rates in developed countries, particularly in the US and among nations in the European Union, have been rising since the beginning of the year, in part because of large stimulus schemes designed to rehabilitate their economies battered by the pandemic.

Other possible reasons for the inflation rate hike are pent-up demand, recovering world commodity prices due to a production disruption during the pandemic, and a shortage of shipping containers.

Thailand recorded higher prices in April, up 3.41% year-on-year, the first increase since March 2020 and the largest jump in eight years, led by higher oil and food prices as well as the end of government subsidies for utility bills. Inflation eased to 2.44% in May and 1.25% in June.

For the first six months of the year, average headline inflation was 0.89% year-on-year and core inflation, which excludes raw food and energy prices, was 0.27%.

Based on the rates in the first half of the year, the Trade Policy and Strategy Office, which prepares the Consumer Price Index (CPI), a gauge of headline inflation, feels confident annual inflation this year will stay between 0.7-1.7% (with an average of 1.2%), a rate the Commerce Ministry considers to be appropriate for Thailand's economic situation. 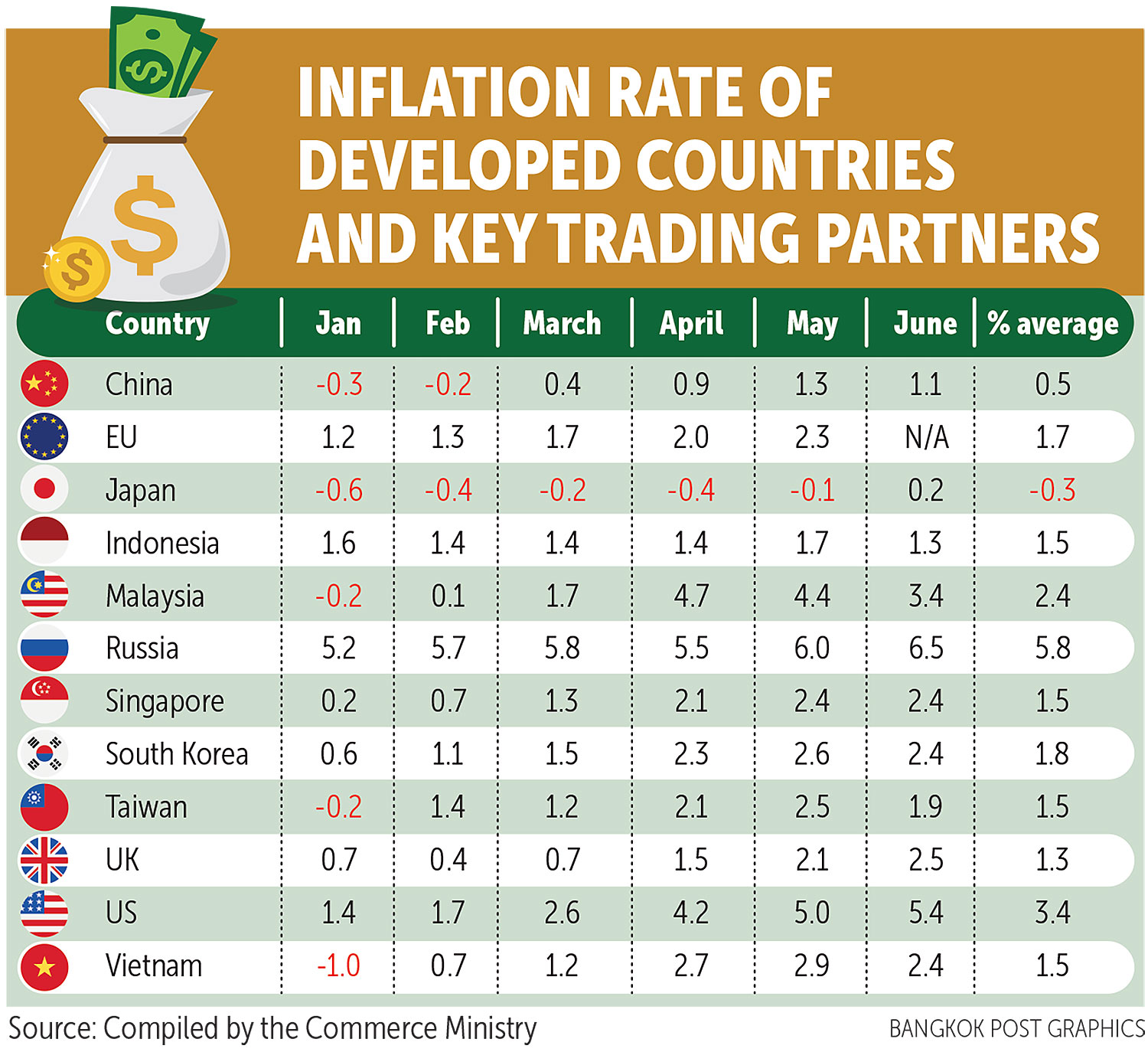 Phusit Ratanakul Sereroengrit, director-general of the Trade Policy and Strategy Office, said inflation in Thailand for the rest of the year is expected to remain in a narrow range within the ministry's target.

Prices of most goods and services have yet to signal significant increases compared with last year, while the outbreaks have lowered the income and purchasing power of the public, he said.

Government measures to reduce the cost of living for people through subsidised electricity and water bills, as well as stimulus packages such as the co-payment scheme and the Rao Chana (We Win) financial aid scheme have helped decelerate the rate of inflation, said Mr Phusit.

The office predicts inflation will settle at 2.13% in the third quarter and 2.37% in the fourth quarter, driven by high energy prices and the recovering global economy.

In the second quarter the rate was 2.36%, which represented a contraction of 0.53% on a yearly basis.

"Thailand's inflation rates are influenced largely by higher energy prices this year, while the price fluctuations of fresh food may drive the rates to a periodical increase," he said.

"The government is always on the lookout for inflation, using temporary measures to prevent it from rising too quickly." 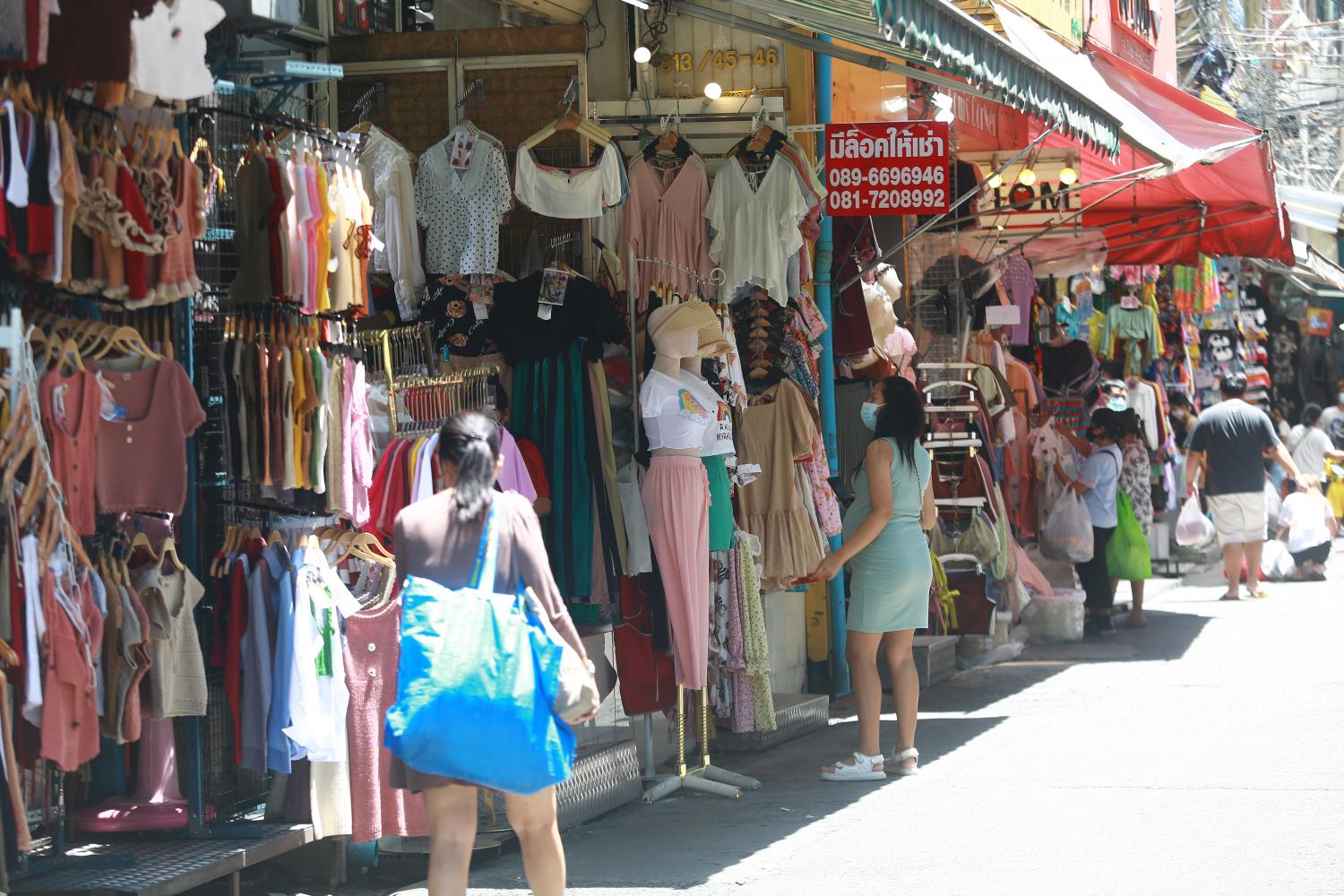 The atmosphere at Bangkok's Pratunam market following the third wave of Covid-19 outbreak in the capital. Average headline inflation has been 0.89% year-on-year for the first six months of 2021. (Photo: Somchai Poomlard)

According to Mr Phusit, the Commerce Ministry revised the base year for calculation of the CPI, which is used to gauge the country's headline inflation every four years to keep pace with changing social and economic conditions.

The new CPI calculation extends coverage to households with a monthly income of 6,987-50,586 baht per household, which represents 71% of households nationwide.

The ratio of households in Greater Bangkok has been reduced to 22% from 42% under the previous calculation.

The number of product and service items used in the CPI calculation has been expanded to 430 from 422 items previously, comprising 341 product items and 89 services in seven categories Thai households consume on a regular basis.

The list of goods and services in the inflation basket is always updated in keeping with current consumer behaviour and future trends.

Each product and service is valued proportionately depending on its importance according to the weight structure derived from the survey of household socioeconomic conditions produced by the National Statistical Office.

Mr Phusit said most countries have the same approach in calculating the inflation rate, although the product list structure may vary.

"Almost every country in the world has measures and policies to oversee the cost of living," he said.

"These may include a freeze on oil prices, an oil tax reduction, utility rate cuts, agricultural product subsidies or a freeze of the minimum wage."

Mr Phusit said the most effective methods for most countries to control the cost of living are monetary and fiscal policies such as a reduction of the interest rate, sales tax, or import duty on essential goods such as food, drugs, pharmaceuticals and other medical products, as well as government bond issuances to reduce the money supply in the system. 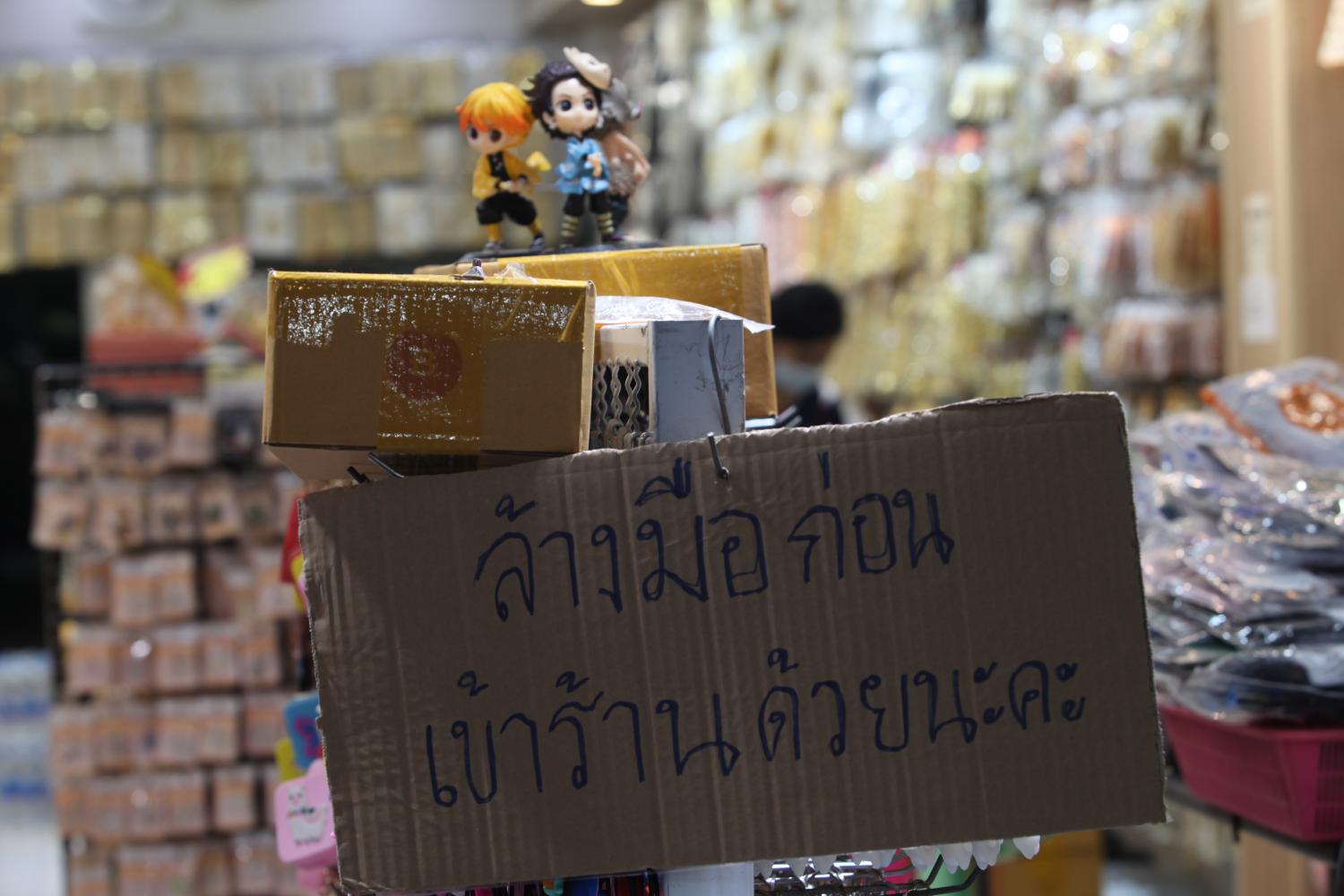 A sign asks customers to wash their hands before entering a shop at Sampheng market. (Photo: Apichart Jinakul)

He said while the country's engages in many economic activities such as exports and imports, Thailand is a relatively small economy that relies on imported energy.

Food production in the country is for both domestic consumption and export and still relies on certain imported raw materials for production, such as tuna, soybeans and cereals, said Mr Nipon.

More importantly, Thailand's agricultural product prices depend on weather conditions in different areas, while the prices of imported raw materials depend on uncontrollable prices in the world market.

"During the pandemic, Thailand's headline and core inflation, which excludes raw food and energy prices, depend largely on the government's monetary and fiscal policy," he said.

"Every country has its own monetary and fiscal policy to help its people and rehabilitate its economy. Thailand used the co-payment scheme, Rao Chana aid scheme and other projects to stimulate consumer spending and reduce the economic impact on people and businesses."

However, Mr Nipon said Thailand's consumption demand is unlikely to recover anytime soon because the country is handcuffed by the pandemic.

He said Thailand has a very large service sector, including tourism, transport, restaurants and retail, which has seen its sales volume drop by almost half.

The inflation rate in Thailand is unlikely to increase much because of weak purchasing power in the country, while the private sector has no new investments, said Mr Nipon. 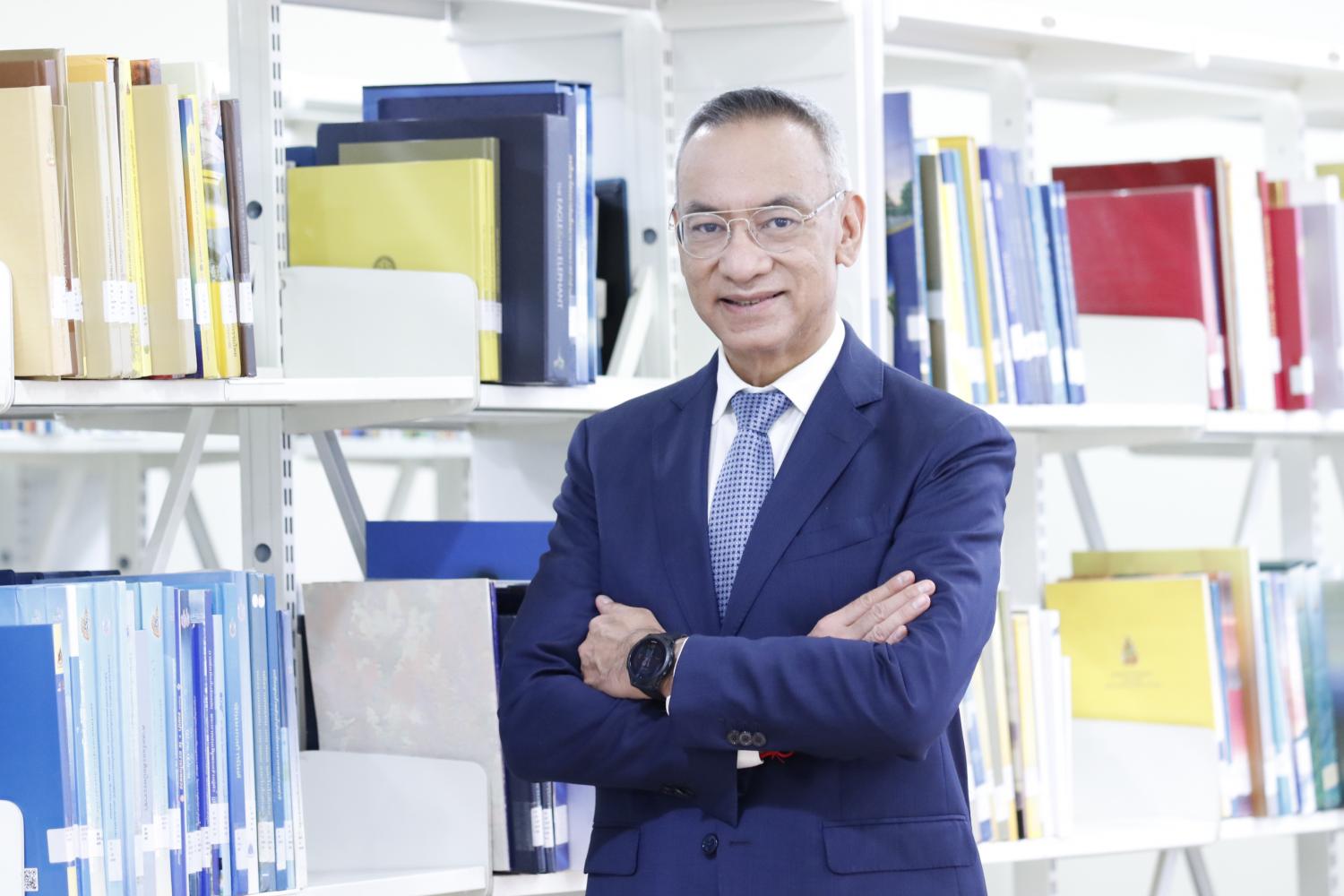 Thanavath Phonvichai, president of the University of the Thai Chamber of Commerce, said the country's inflation is being driven largely by the supply side, from higher production costs such as higher oil prices and some fresh food items.

"There is nothing to be concerned about regarding Thailand's inflation, and the Bank of Thailand has no pressure to increase the policy interest rate this year," said Mr Thanavath.