Investor confidence has plunged to its lowest level in nine months and is now bearish amid concerns over Thailand's worsening pandemic and economic contraction, according to a new survey. 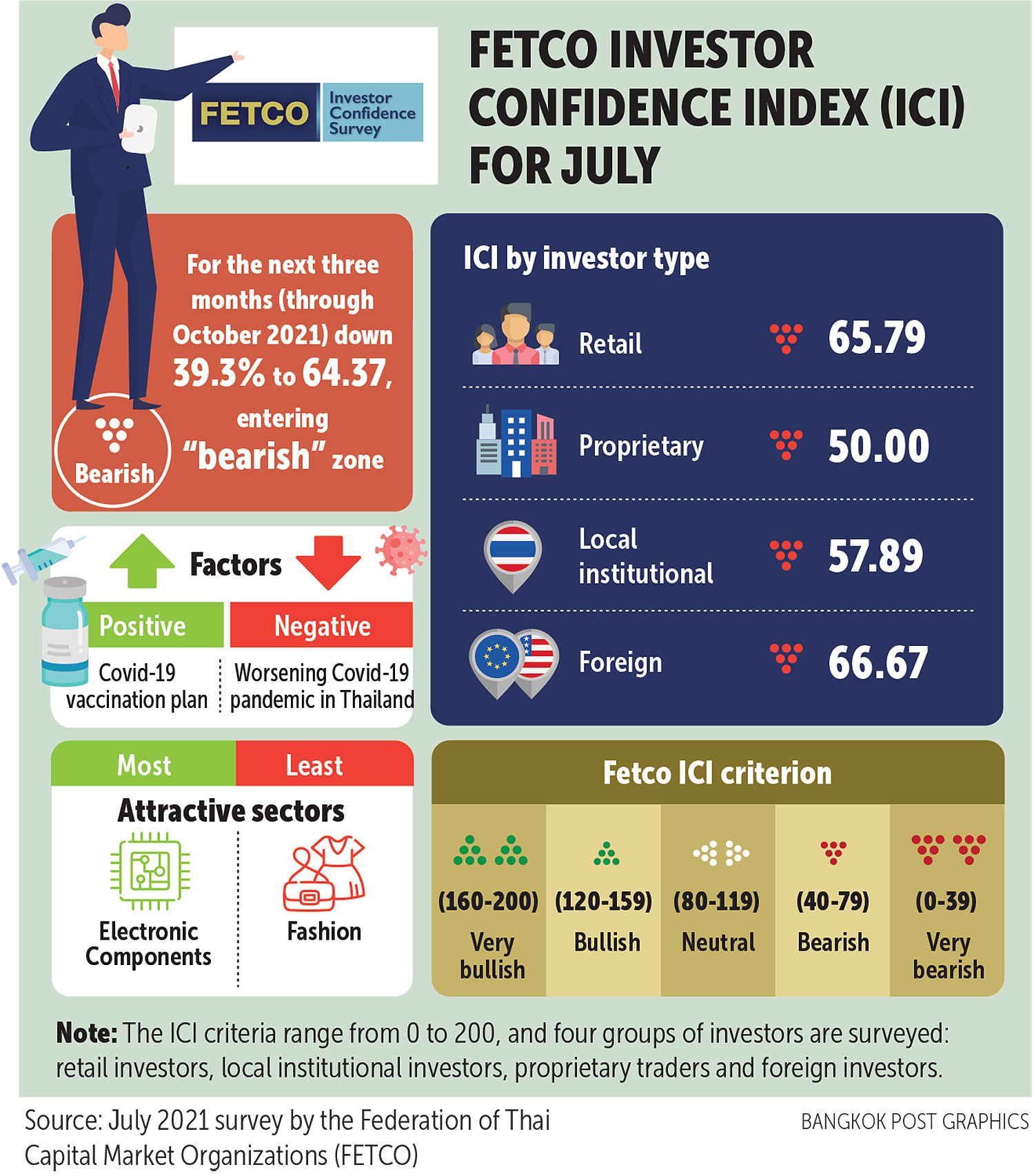 Paiboon Nalinthrangkurn, chairman of the Federation of Thai Capital Market Organizations (Fetco), said the Investor Confidence Index (ICI) in July, which anticipates market conditions over the next three months, was at 64.4, down 39.3% from the previous month. It fell into bearish territory, which is anything below 80, for the first time in nine months.

Vaccine distribution to help ease the pandemic remained the strongest factor supporting investor confidence, followed by the pace of the local economic recovery and hopes that government policies would shore up the economy.

The intensifying pandemic, followed by international conflicts and the country's economic retreat -- including the weakening of the baht against the US dollar, which caused outflows of 17.7 billion baht in July -- are the strongest factors causing pessimism.

However, the government's stimulus package of 42 billion baht to boost consumer spending and aid businesses during the lockdown, as well as the relief plan for utility bills, have greatly helped to cushion the downside.

For international factors, all eyes are on the Jackson Hole Symposium scheduled for Aug 26-28 as investors look for any move by the Federal Reserve to taper its quantitative easing.

In addition, investors are watching the direction of Beijing's control over investment in Chinese securities, especially in the technology sector, and conflicts among the members of Opec, which could cause global oil prices to fluctuate.

According to Fetco, the Thai government's plan to fully reopen the country this year is unlikely to happen.

Any movement or progress regarding fiscal policies will be monitored closely as they play an integral role in the country's path to economic recovery, said the federation.

Ariya Tiranaprakij, deputy managing director of the Thai Bond Market Association, said Thailand's Monetary Policy Committee is likely to keep its policy rate unchanged at 0.5% at its meeting this week.

For the bond market, yields of 5-year and 10-year government bonds at the end of the third quarter are expected to remain unchanged at 0.82% and 1.66% respectively, according to the Interest Rate Expectation Index survey on July 16.

The main factors expected to impact the bond market include debt market supply and demand, and trends in global interest rates and the local economy.

Most of the survey's respondents expected bond yields to rise as growing vaccination rates are likely to help accelerate Thailand's reopening.

US Treasury yields are also likely to rise, which could trigger Thai government bond yields to follow suit.

However, some respondents believe yields of Thai government bonds may fall following the government's increased spending on financial relief to help those impacted by the pandemic.