With tourism hobbled, other sectors will have to step into the breach

On June 16, when the prime minister announced his ambitious plan to reopen the country by mid-October, Thailand reported 2,331 new daily Covid-19 infections. 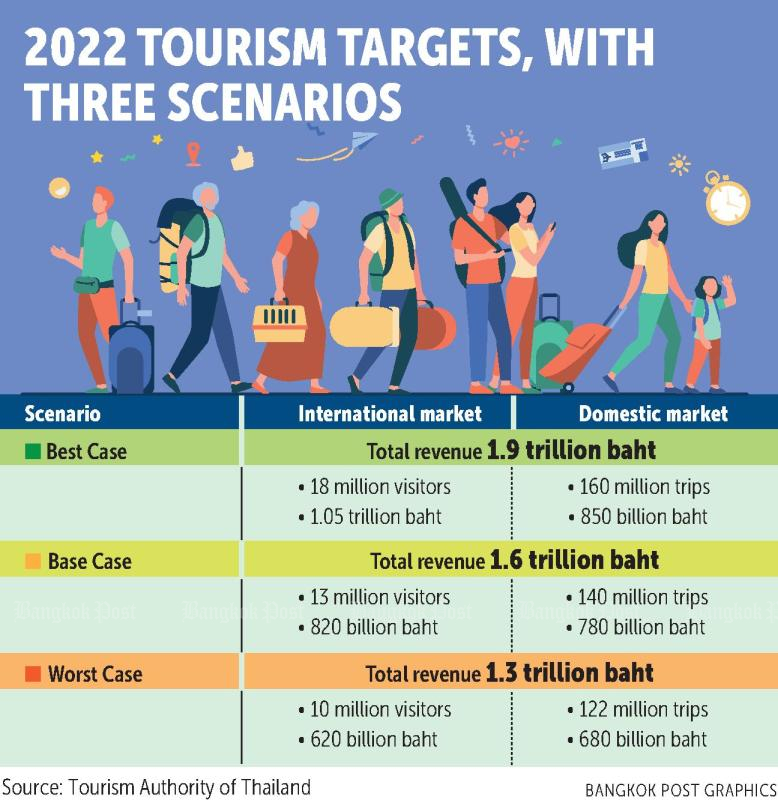 Very few likely guessed that figure would skyrocket by almost nine times to more than 20,000 cases in less than two months, with no signal of when the pandemic might be controlled.

The slow rollout of vaccinations amid a fast-paced outbreak makes the complete reopening by mid-October extremely unlikely.

Tourism contributed 18% of Thailand's GDP in 2019, so the country needs to look to other segments to drive the economy.

Last week the Bank of Thailand trimmed its GDP growth forecast for 2021 to 0.7%, down from 1.8% projected last month, with the delay in reopening and lower tourism confidence cited for a decrease of 0.3 percentage points.

If the country can contain the virus spread at the beginning of the final quarter, Thailand can record 150,000 visitors this year and 6 million in 2022, according to the bank.

If the Covid-19 flare-up lasts until the end of the year, foreign arrivals are projected to tally only 100,000 this year and 2 million next year.

The Tourism Authority of Thailand (TAT) downgraded its revenue forecast for tourism this year to 625 billion baht, down 23% from last year.

The uncertainty of the pandemic also led the TAT to release three scenarios for its 2022 targets.

The worst-case scenario forecasts 10 million international visitors next year and 122 million domestic trips, generating a total of 1.3 trillion baht, a sharp decline of 56% compared with the market in 2019.

The TAT said one major factor in a tourism market recovery is the travel policies of source markets, particularly mandatory quarantines for tourists upon returning home.

In addition to the caseload in Thailand, the highly contagious Delta variant triggered a resurgence of new cases and a rising death toll in many countries, including those with impressive vaccination rates. This development signals a slow recovery for global tourism.

The UN World Tourism Organization in May conducted a global survey among its panel of tourism experts on the expected recovery time for the sector, with 49% choosing 2024 or later.

Even if the Thai government tries its luck by differentiating sandbox destinations from the whole country, the Phuket example shows there is a limit to the number of people willing to visit a country unable to control an outbreak.

Forward bookings were bullish at the start of the Phuket sandbox in July, then gradually slowed for August and September, in part because of the worsening Covid-19 spread.

The tourism sector could be in shambles for at least two years, leaving a tremendous challenge for other sectors to lead a recovery.

Without tourism to generate much revenue, the economy needs to rely more on exports, one of the few key economic engines to drive the country, said the Federation of Thai Industries (FTI).

"Exports are growing as a result of the global economic recovery," said Mr Supant.

Last week the Joint Standing Committee on Commerce, Industry and Banking (JSCCIB) painted a dim picture of the economy, cutting its GDP growth target to a range of -1.5% and zero.

Only exports provide reason for hope, with growth predicted at 10-12%, according to the JSCCIB.

To reach this lofty projection, domestic supply chains need better protection against Covid-19, which threatens to escalate in the manufacturing sector, he said.

"Both the state and the private sector must work together to contain the outbreak."

Mass inoculations and testing, especially the use of rapid antigen test kits, are effective tools to bring the virus under control, he said.

Mr Supant suggested the government help companies pay for testing so they can quickly take infected workers for treatment and reduce the chances of transmission.

This assistance would not require a great amount of money, unlike major spending allocated for state rehabilitation programmes, he said.

As people spend more time at home due to the pandemic, startups that can operate from home have the potential to grow.

Startups can be a new engine for the economy when other sectors falter because of the impact of the pandemic, said Pawoot Pongvitayapanu, an e-commerce pundit.

He said startups engaged in e-commerce as well as live and social commerce have the potential to drive the economy as they can support domestic trade.

In the long run, these startups can help boost the economy through cross-border e-commerce, said Mr Pawoot.

Thanapong Na Ranong, former president of the Thai Venture Capital Association, said as online travel agents are reeling from the impact of the pandemic, this opens the door for Thais to speed up the creation of the country's own digital platform for tourism.

"By having a national platform with collaboration from state and private organisations, we can have our own data source that can be used to drive the country forward in the digital economy," said Mr Thanapong, also managing director of Beacon Venture Capital.

Nok Air chief executive Wutthiphum Jurangkool said even if tourism takes two years to get back on track, the sector should not be left idle during this time.

He said the government should start fixing the broken engine by strengthening the economy via tax incentives for local investment.

"A tourism recovery path of longer than two years will hurt the national economy. But the authorities can reduce risks by preparing a mechanism for future growth starting from today, particularly for those in second-tier cities and faraway provinces," said Mr Wutthiphum.

With the spotlight on top-tier tourism destinations, he said companies in many provinces are running their businesses without a clear direction, despite having the potential to shine on their own.

Mr Wutthiphum said private investment is the key to revive tourism in each province, but local firms need an accelerator from the government to make projects happen.

"Each province should be assigned to create one tourism cluster where all related supply chains share the investment and development," he said.

"The Board of Investment [BoI] could offer special tax incentives for such projects, which could entice future investment."

For instance, the BoI can provide tax incentives for a minimum investment of 4 billion baht for projects that benefit all stakeholders, such as transport services, hotels and attractions, said Mr Wutthiphum.

Strategic development in one direction will provide tourists with a better travel experience as they can access better services, such as public transport, which used to be an obstacle in many provinces, he said.

Such cooperation builds stronger tourism ecosystems in provinces because they have a reliable source of income and can maintain steady employment without relying on migrant labour, said Mr Wutthiphum.

Sisdivachr Cheewarattanaporn, president of the Association of Thai Travel Agents, said the government should support the IT sector because it could be an economic spark plug for the country.

Tourism operators need IT support to transform their services amid intense global competition, which is forecast to happen once the worldwide tourism industry gets back on its feet.

"Thai tourism probably won't get back to 2019 levels until 2024. However, a recovery is heavily dependent on vaccine efficacy, which could be stunted by contagious and resistant variants," said Mr Sisdivachr.

"The lesson from the Phuket sandbox is you cannot differentiate one island from the whole country as long as the outbreak is not controlled. We still don't have good protection via effective vaccinations."

The government plans to speed up the implementation of its tax reform plan to ensure a sufficient budget for new investment in the post-pandemic era, said Kulaya Tantitemit, director-general of the Fiscal Policy Office (FPO).

Ms Kulaya said the government's revenue collection for fiscal 2021 ending this September is expected to be at least 200 billion baht below its target of 2.68 trillion baht as a result of the outbreak.

Revenue collection in fiscal 2020 fell short of the target by 336 billion baht.

She said the tax reform will not raise tax rates and will not impact low-income earners.

The FPO predicts the number of new infections will peak in the middle of August before a gradual improvement at the end of the month.

If this comes to pass, the office predicts the number of international tourist arrivals in Thailand this year at 300,000, rising to 12 million next year. Ms Kulaya said these totals are still a far cry from the 39 million arrivals posted in 2019.