You eat meat from factory farms. Why not a lab?
Opinion

You eat meat from factory farms. Why not a lab?

A nugget made from lab-grown chicken meat is seen during a media presentation in Singapore, the first country to allow the sale of meat created without slaughtering any animals, on Dec 22, 2020. (AFP photo)

Soaring beef prices, a new E. coli recall, and a recent swine fever outbreak have added to a growing pile of evidence that the grossly over-consolidated meat industry is in need of a new model. This piece of our global food supply must be reformed – and thoroughly reimagined – before it becomes any more unreliable or environmentally costly.

While plant-based substitutes have been gaining considerable market share over the past year, industrial meat and seafood will need a bigger saviour than garden patties (or Tunato) that try to mimic the flavour and texture of the real thing. We’ve got one good candidate in lab-grown meat — aka “cultured meat” or “cellular agriculture”— an emerging frontier that has enormous potential to become the foundation of a humane, climate-smart future protein supply.

Though created in a vat, cultured products are indistinguishable from animal products on a cellular level, and as nutritious — without the environmental and moral burdens of raising animals to kill and eat. But to actually succeed, cultured meat must overcome two major obstacles: pricing and consumer doubt.

Industry pioneers have shown extraordinary progress in recent years making their products technologically viable. As conventional beef prices have risen, the production costs of cellular agriculture have been plunging, and the process is dramatically more efficient than breeding livestock. A cultured beef product, for example, can be grown and ready for market within three weeks, compared with the 18 to 24 months it takes to raise a steer for slaughter. Moreover, indoor lab facilities can be located near urban centres, localising supplies and reducing the threat of disruption.

The category is growing fast. Global investment in this new sector rose six-fold to $3.2 billion in 2020. Start-ups have proliferated from about a dozen worldwide in 2017 to more than 100 today, drawing investors from billionaire Bill Gates to Tyson Foods Inc. The first wave of lab-grown products could be hitting the US market by early next year.

Prices, which are sky-high now, will eventually become more affordable as the industry scales up production. So the biggest hurdle to long-term success will be getting the marketing right. Consumers will trust and adopt cultured meat products only if industry leaders establish effective communication strategies from the get-go. The average person right now has only the vaguest idea of what 'lab meat' even is — and it sounds anything but delectable. 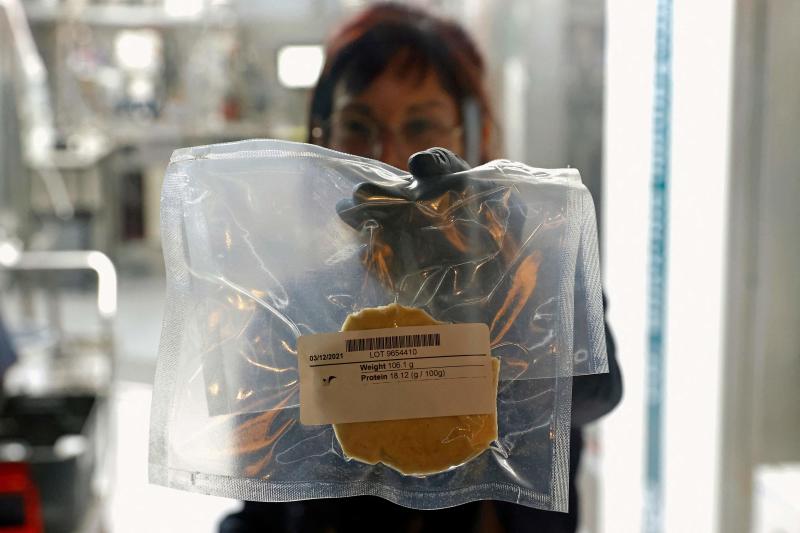 A technician displays a lab-grown chicken meat in a sealed bag at the food-tech startup SuperMeat in the central Israeli town of Ness Ziona on June 18, 2021. It looks like chicken and tastes like chicken; but diners in Israel are tucking into laboratory-grown "meat" that scientists say is an environmentally-friendly way to feed the world's growing population. (AFP file photo)

Getting the name right

The industry should collectively agree to use a consistent and more appetising nomenclature. Right now, some companies are calling their products “cultivated” or “cell-based” meats, while others use the term “no-kill meats”. Industry pioneers would do well to jettison all that terminology in favour of something far simpler, like “clean meats”.

At a time when consumers have already come to trust “clean energy”, cultured meats should be considered the protein equivalent. There are conflicting estimates on the environmental benefits of clean meats, given that there are still so many unknowns (the energy demands, for example, will improve as production scales). But one study published in the Journal of Environmental Science and Technology found that cultured meat involves up to 40% less energy use, 99% lower land use, and about 85% lower greenhouse gas emissions as well as consuming 90% less water compared with meat conventionally farmed in Europe.

Cultured meats can also be clean from a human-health standpoint. They're free of bacterial contamination such as E.coli from faecal matter, which routinely gets mixed into meats in slaughterhouses, and they’re potentially lower in cholesterol and saturated fats, the presence of which can be controlled as the meats are cultivated.

The better consumers understand the production process behind clean meats, the more they'll begin to trust these products. Scientists have learned to grow any kind of protein, be it chicken or yellowtail fish or Wagyu beef, starting with a small sample of muscle and fat cells removed in a biopsy-like procedure from a live or recently dead animal. The cells are given a controlled environment inside a vat, or bioreactor, to do what cells naturally do: replicate.  The bioreactor, is really just a sophisticated Crockpot in which cell cultures are fed the special brew of nutrients and oxygen they need to grow — the same nourishment given to living organisms.

In fact, this isn’t new-fangled technology at all: scientists have been growing animal tissues for decades for medical applications, such as life-saving heart valves. And long before medical experts were doing this work, prominent public figures had recognised the inherent inefficiency of industrial live-animal farming for meat production. Winston Churchill wrote in 1931: “We shall escape the absurdity of growing a whole chicken in order to eat the breast or wing, by growing these parts separately under a suitable medium.”

Products will likely be featured on restaurant menus before they’re regularly available in grocery stores, a market with a steeper learning curve. That’s been the strategy in Singapore, which became the first country to approve cultured meats for commercial sale in December. San Francisco-based Eat Just Inc debuted its cell-based chicken dishes in a few restaurants at prices ranging from $17 to the low $20s. Though apparently discounted considerably, that’s still higher than most people will be willing to pay for what amounts to chicken nuggets. The priority right now is just to educate the consumer. 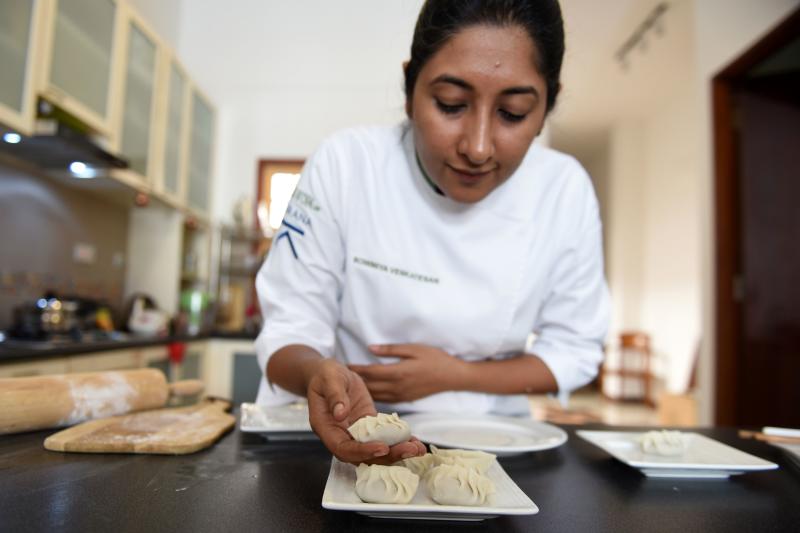 Karana chef-in-residence Sowmiya Venkatesan displays plant-based "pork" and chive dumplings made from jackfruit in Singapore on Dec 20, 2019. From lab-grown "seafood" to dumplings made with tropical fruit instead of pork, rising demand for sustainable meat alternatives in Asia is spawning creative products to appeal to local palates. (AFP file photo)

The production of cultured seafoods, poultry and beef is already beginning to spread worldwide. Eat Just recently raised $200 million to expand, and has been valued at $1.2 billion. The start-up Wildtype is now producing sushi-grade cultivated salmon at a pilot plant in San Francisco. Singapore’s Shiok Meats is beginning to scale its lab-grown shrimp and crab production. Israel’s Aleph Farms just raised $105 million to produce cultured beef, and Rehovot, Israel-based Future Meat Technologies recently opened a factory that will have the capacity to produce 1,100 pounds of cultured chicken, pork and lamb daily.

The US could see its first cultured meat products arrive this year or next — as soon as market forerunners get approval from the Food and Drug Administration, which is all but inevitable. The FDA and US Department of Agriculture agreed in 2019 to regulate these products, and have been reviewing their safety for three years.

In the coming months, Upside Foods (formerly Memphis Meats) is expected to open a large production facility in the San Francisco Bay Area. Chief Executive Officer Uma Valeti has grown his company from two to 125 employees, raised more than $200 million in funding from investors including Whole Foods Market founder John Mackey, and brought down his cost of production substantially — by a factor of 1,000 — since 2015. His company served me my first plate of lab meat in 2018: a delicately seasoned duck breast, pan-seared on a bed of radicchio with orange vinaigrette, harvested fresh from the bioreactor. It tasted indistinguishable from meat because it is meat — just grown without the bones, organs, hide, feathers, hooves, and of course, the sentience. Valeti told me recently his cultivated chicken could initially sell in the US at a price competitive with premium chicken products (about $10-$12 per entrée serving).

Events of the past year, punctuated by the current pricing uproar, illustrate the urgent need for new options. Four companies slaughter more than 80% of beef in the US alone, and the numbers are similar for poultry and pork. The economic benefits that drove consolidation are increasingly outweighed by supply risks. We saw this last year when Covid-19 shut down plants across the country after scores of meatpacking workers were infected, and when a JBS SA pork facility fell prey to cyberattacks in May.

Meanwhile, demand for meat is skyrocketing: In the past 50 years, global population has doubled while meat consumption has more than tripled. Some 60 billion animals are slaughtered annually for human consumption, and about 15% of all greenhouse gas emissions derive from meat production, according to the Food and Agriculture Organization of the United Nations. And climate change is biting back: drought, heat, flooding, wildfires and superstorms are increasingly threatening farms, ranches and processing facilities.

No matter how needed, cellular agriculture will be doomed if it doesn’t get its messaging right. Remember the misbegotten controversy that erupted around genetically modified crops? Ultimately, industry leaders need to convince consumers that their products are not only clean and natural, they’re traditional more than science fiction. Executives must communicate clearly to the marketplace that clean meats reimagine an old idea using new technology, and usher in a solution whose time has come.