BoI applications up sharply in first half
Business

BoI applications up sharply in first half

Despite escalating Covid-19 infections in the country, the value of Thailand's investment applications more than doubled in the first half of the year, boosted by foreign direct investment, along with growth in the electronics and medical sectors. 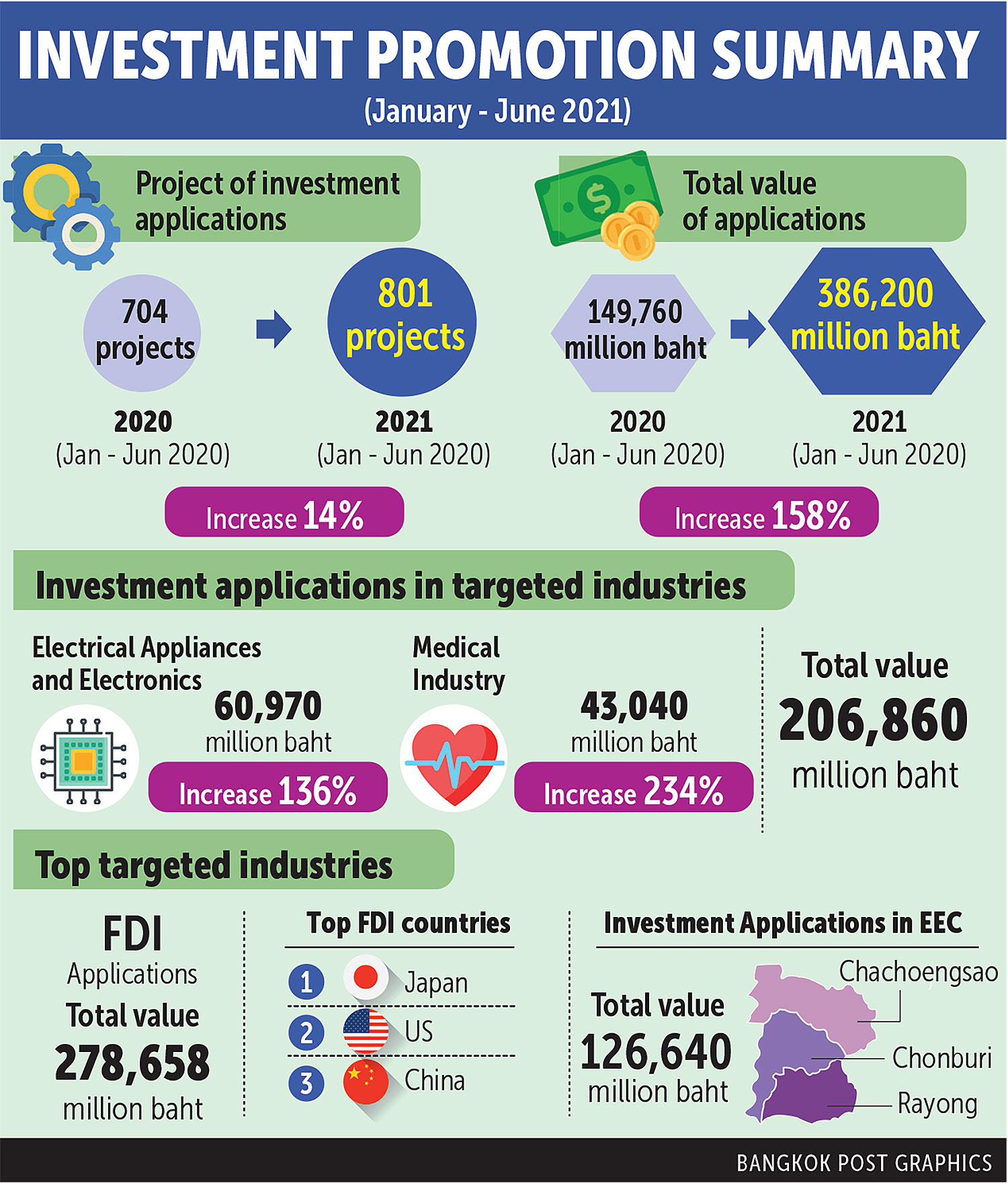 The Board of Investment (BoI) reported yesterday in the first six months of this year, applications increased by 14% from the same period last year in terms of the number of projects, and 158% in combined value, led by increasing foreign direct investment (FDI) applications, sustained growth in target industries including the electronics and medical sectors, as well as in power generation.

From January to June, local and foreign investors filed a total of 801 investment applications representing a combined value of 386.2 billion baht, compared to 704 projects worth 149.76 billion baht in the year-earlier period.

"We feel encouraged by the fact that so many foreign investors, including many new ones chose to invest in Thailand at a time when the global investment environment remains challenging due to the continued impact of the Covid-19 pandemic," said BoI secretary-general Duangjai Asawachintachit.

"The statistics demonstrate investors' confidence in Thailand's strengths in key industries, such as electronics, medical supplies and biotech."

According to Ms Duangjai, the number of FDI project applications during the six-month period decreased 6% year-on-year to 403 projects, but their combined investment value was 278.7 billion baht, compared to 430 projects worth 71.9 billion baht.

In terms of sectors, the electrical appliances and electronics industry attracted the most investment among target sectors with 77 projects worth 61 billion baht, a 136% higher than the previous year.

The medical sector came in second with 47 projects worth a combined 43 billion baht, more than triple the 12.9 billion baht of the same period last year.

The petrochemicals and chemicals sector ranked third with 43 projects worth 28.2 billion baht, up sixfold from the year earlier, followed by the agriculture and food processing sector which saw 97 applications worth 23.2 billion baht, up 78% year-on-year.

The biotechnology sector came in fifth with 10 projects worth 20.7 billion baht, up ninefold from the year before, boosted by a large bioplastics investment application from the US.

The 12 target sectors represented a total of 431 applications, with a combined investment value of 206.9 billion baht, more than two and a half times the 78.2 billion baht seen in the year earlier.

The power generation sector was 198 applications with a combined investment value of 120.8 billion baht.

"The continued buildup of the power generation infrastructure, mostly based on the use of renewable energy and clean natural gas, is an important supporting factor for investment, ensuring stable power supply for the other sectors," Ms Duangjai said.

The government's flagship Eastern Economic Corridor attracted 232 projects with a combined investment of 126.6 billion baht, a 54% increase from the same period last year.