The Bangkok skyline as seen from above Saphan Taksin skytrain station. Ms Neeranuch says Bangkok condos remain at the forefront of foreigners' minds for their second-home plans.

Anti-government protests that turned violent are expected to impact condo demand from foreign buyers, even though some relaxation of lockdown restrictions next month may help lift overall sentiment, according to property consultancy Edmund Tie & Co Thailand.

Neeranuch Kanokvilairat, research and consulting manager at Edmund Tie, said foreigners who were interested in Bangkok condos, particularly those from Singapore, Taiwan, Hong Kong and China, were starting to worry about the ongoing protests.

"They delayed purchases despite attractive deals during the pandemic," she said.

"Their sentiment will resume if the government can handle the situation and reduce the violence."

According to the Real Estate Information Center, condo units transferred to foreigners during the first half this year totalled 4,358 units worth 20.5 billion baht, up 14.6% and 31% respectively year-on-year.

Chinese were the biggest buyers with 2,748 units worth 12.6 billion baht, accounting for 63% and 62% of the total, respectively.

Ms Neeranuch said Bangkok condos were at the forefront of foreigners' minds in deciding on second homes.

"They made up the bulk of online bookings for new units for the purpose of reselling and renting," she said.

Easing of lockdown restrictions next month may reduce investors' stress, but investments and consumer spending will depend largely on vaccine supply and a speedy vaccination rollout, said Ms Neeranuch.

"The property market will continue to be silent in the fourth quarter if vaccines take a long time to reach Thais," she said.

"The supply is insufficient and there are news reports about unfair rollouts." 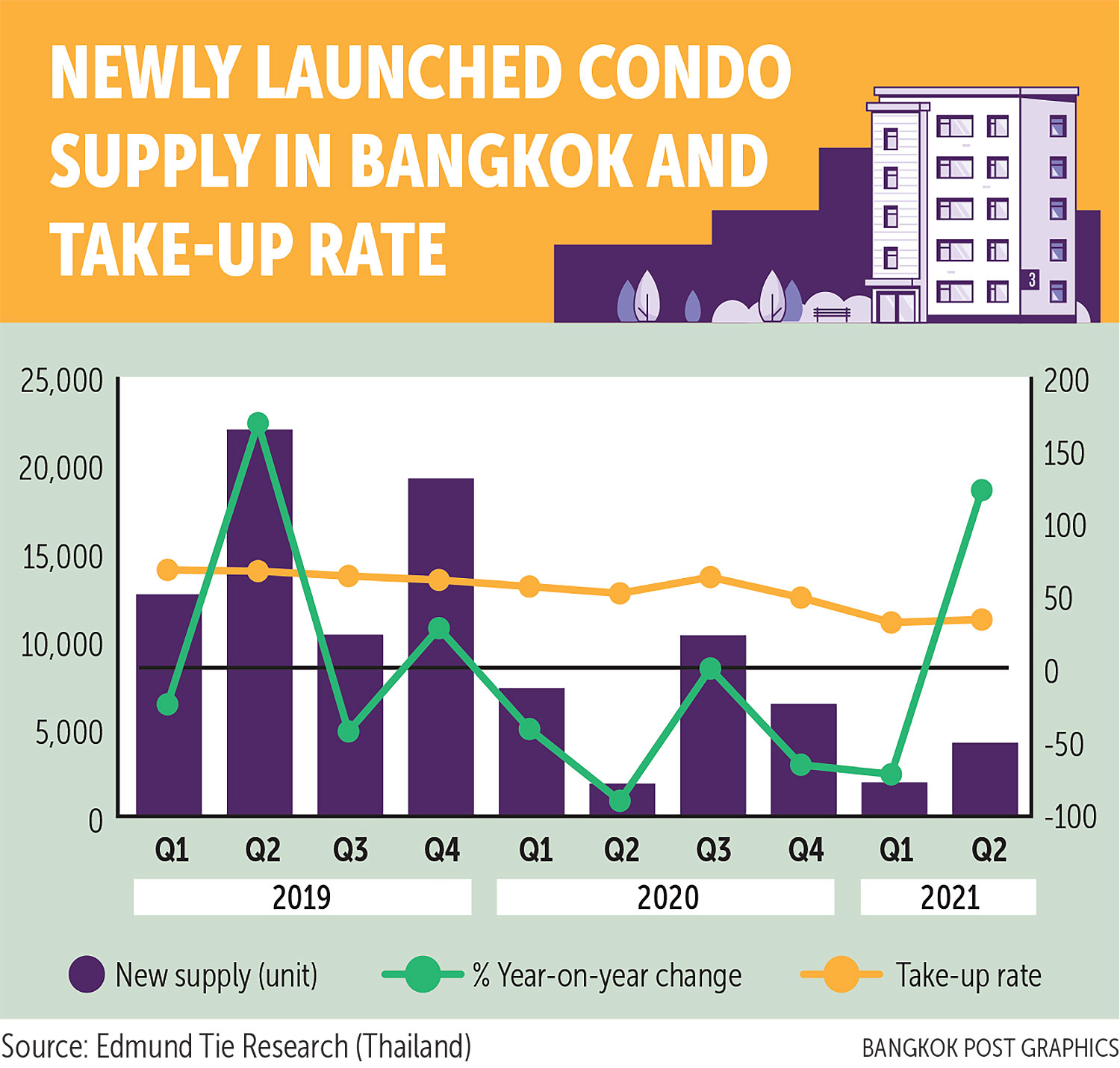 This year many projects have been launched, some in the super-luxury segment in the central business district (CBD), focusing on foreign buyers as a key target.

According to Edmund Tie, new condo supply launched in the second quarter this year totalled 4,214 units, more than doubling from 1,963 units in the first quarter.

All of these projects were located in non-CBD areas and mostly tapped the affordable segment with lower prices.

The take-up rate in the second quarter improved to 33.1% from 31.7% in the first quarter. However, both were the lowest rates on record, even lower than in 2011 when massive floods inundated Greater Bangkok, said Ms Neeranuch.

"The Bangkok condo market never experienced such a decline," she said.

"The lowest rates never fell below 40% in the past two decades."

As a consequence of lockdown measures and the temporary closure of construction sites in Bangkok, developers will suppress new condo launches this year, said Ms Neeranuch.

"The unfavourable economic and business sentiment caused by the third wave of the outbreak caused developers to suspend the launch of CBD condos for the first time since 2008," she said.

Amid uncertainties during the pandemic, developers are preserving cash and draining unsold inventory via social media marketing, such as Facebook and YouTube, to reach more customers.

The number of new condo projects launched in 2021 is forecast to decline by 25-35% due to several factors, but mainly because a glut of unsold units remains on the market.

In addition, investment sentiment has waned and consumers are more cautious with their spending.

To diversify risk, some residential developers have shifted to non-residential markets, such as logistics warehouses, factories and healthcare facilities, which will provide them with new business opportunities and long-term sustainability, she said.

The acquisition of new plots for future condo developments by developers is expected to continue, but the timeline for project development might be delayed, said Ms Neeranuch.

"Residential demand in the third quarter is anticipated to be driven by real buyers, including families and first-time workers," she said.

TTTBB purchase by AIS in spotlight